A Bunch of Envies, 2 Books, Some painting of paper and a bit of mischief from the new kids on the block

Hello Readers!
Thanks for stopping by! Go get a cuppa something good and settle in for a spell. This post is heavy on pictures and scattered with chatter.

I've not done any artwork since the day before yesterday when I finished the greeting card book and did a few little paintings. My left arm is not cooperating at all! We'll see how long the chatter can last till the arm says no more!

Envelopes have been on the radar lately. I have more of these in the works; both physically and mentally. I love doing these collage envelopes!

I have more envelopes than one person should admit to having. Envelopes of every size you can imagine. and if I happen to need one a size I don't have...not a problem! I will make one out of whatever is available to make one out of. My envelopes in this post are in a range of sizes. Some started out as business envelopes that I have a ton of or they are from my own mail. Envelopes sent with requests to return them. If I don't have to return it, it goes to the drawer with the other hundreds of envelopes there gotten throughout the year.

The collage envelopes start out with a large cigar box full of images cut from magazines and junk mail. There is no rhyme or reason to the images in the box. In another smaller cigar box is more smaller images that have no rhyme or reason either. I pick out a few concentrating on I know not what...might be the color, the subject, the shape...I just pluck enough of them out to cover the envelope and see what happens. I really don't start with a set end image in mind. Whatever lands is what happens. IF I'm going by a guideline, it's usually color related.
Sometimes I will add embellishments to the images with oil pastels, sharpie and / or white paint pen. 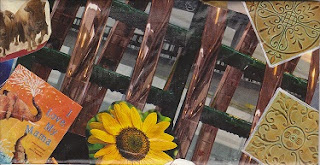 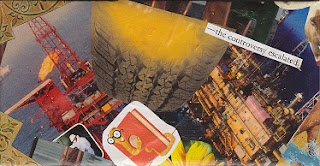 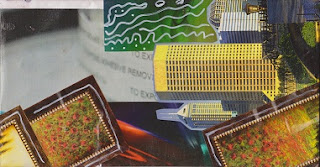 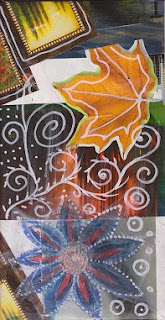 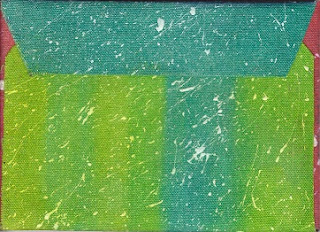 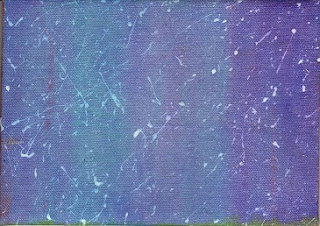 altered envie
rainbow canvas
the envie is made of duck cloth, painted with watercolors and splattered with gesso
5x7.25 inches 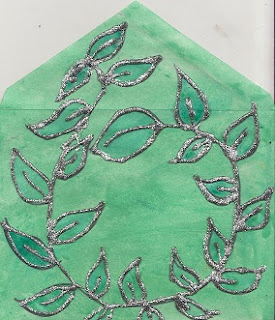 You will see more envelopes in the next post.

I finally finished the fishes you all looked at a few posts back. I did little more to the backsides of them than put a light color of paint on them and write my info with a black sharpie. Homemade gesso is very hard on the nib of a sharpie. That one will never be the same again! The roughening up the  nib took from the gesso should not only make it write less dark, it should make it so it's a useful tool in doing zentangles. We'll see.

All names for these fishes are from my imagination. I don't even think there really is such a thing as a lake trout, let alone one that looks like these! 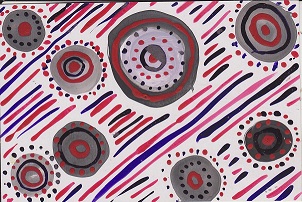 I played around with color one day. 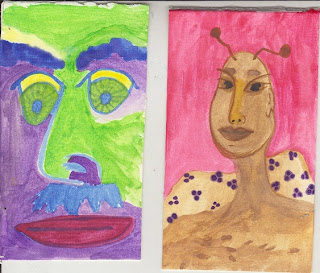 both are done on recycled chipboard, white from a shirtbox. I painted them in watercolors. Just a bit of fun with no intentions of actually making art. Just playing.
I kind of like the alien. I can't decide if it's a he or a she and are the purple spots on it's wings?  The green guy with a blue mustache kinda creeps me out. 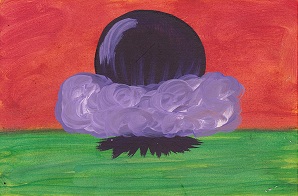 I did a couple of ATCs of atomic blasts too but I'll be danged if I know what became of them. Couldn't find them on this messy desk though I did try.


I haven't quite finished the greeting card book yet but it's well on its way. 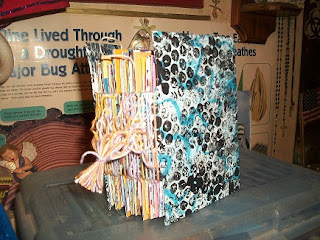 It is missing a page or two cause I found the extra one on the kitchen table the day after I tied this one together. There was really no set rule as to how many pages it should have so it didn't really matter. I've no clue though what I'm going to do with that extra page. Guess I'll have to make another one of these?

I still have to finish the inside covers and do something to the front cover in decoration of some kind. I tied it together with some crochet cotton. This is the first of this kind of book I've ever made. The next one I may do a bit different in the decorating of the pages. My colors don't exactly compliment each other. It was an interesting book to assemble. Time to pass it on to another to put their own marks on. 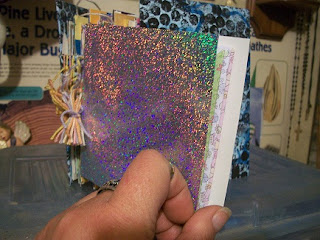 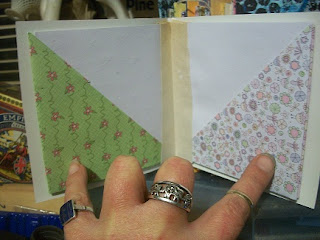 A look inside. It has six of these pockets in three different patterns of paper. An accordian style book. Easy to make! Fast to assemble. Many possibilities. I have another one pretty much like this one that needs to have its cover adhered. You'll see it next time.

Dog wants in. I'd forgotten the dog was outside!

I introduced you all to Lucky Tigger Murray and Tippy in a previous post. I brought them home last Wednesday much to the chagrin of Lola. 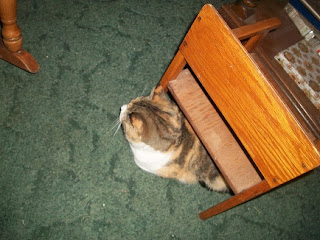 Miss Lola was a pissed off kitty that I would bring two new kids home and not consult with her on the subject beforehand! As I was on the hunt for the new kids earlier this evening, I found Miss Lola in the livingroom 'hiding' under the tiny chair Annabel had left in front of the coffee table the other day when they were all here. She is on guard duty. 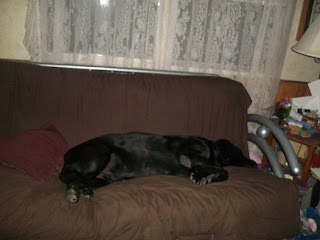 The guard dog, Fred, is on break. 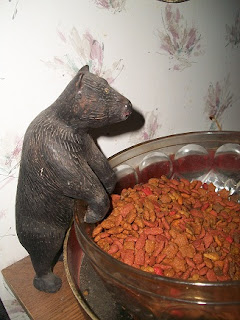 Lola has a helper in Guard Bear taking care of her post in front of the food bowl.

Guard Bear came in a box of junk from an auction a few years back. In the top of this box was old books, papers and such. Buried at the bottom was this hand carved wooden bear and some friends of his...a couple of horses and a colt. Bear used to stand vigil on the side of a flower pot but when the house burned, bear lost his house plant. He got a bit scorched in the fire himself. He now happily watches cats eat. Lola just thinks he guards her food bowl.

The new kids had been way too quiet for way too long. I found them in the laundry room with the door half closed. The laundry door stays open all the time! I knew before I even turned on the light, the new kids were up to no good! 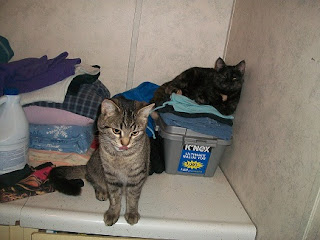 They'd rearranged the counter in the laundry room. 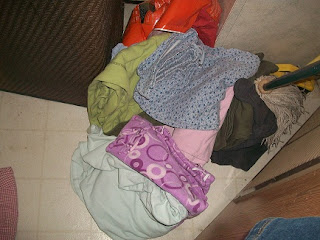 My clean pajamas, which had previously been on the counter in a neat stack, were now on the floor behind the door, and atop the mop and broom. 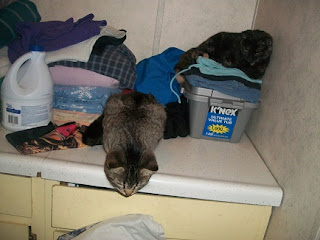 Lucky Tigger Murray had to look to see what I was talking about when I asked why my things were on the floor. Tippy wasn't giving up her spot. I picked the pajamas up from the floor and put them in the drawer where they belong.
all in all the new kids are settling in nicely. Lola has ceased whooping up on either of them, they can safely go wherever they please with Lola having her say about it and they all sleep in my bed at night with no disturbances.
Life is good.
Especially for the critters in my house!
Thanks for stopping by and seeing the new creations!
Be good to one another!
It matters!
Peace
831