A Kidnapping Will Commence Shortly

November is well on its way out and this is my first check in for the month. This will more than likely be the only check in I do this month.

I'm being kidnapped in a few hours.

Fibro took over somewhat and my old brain is a bit foggy on a lot of details since the last post. I've slept a lot. And I've made a few things while I was awake. There have been a few trips to town for  supplies. Mr. Opossum has returned a time or two.

Beings I have about 3 and a half hours till eldest son arrives, I better get on with this post so I can get my bags packed before the boy gets here. Youngest boy will be here at the same time. He's stopping by on his way home from work. Time right now is 4:36 a.m, Friday, November 20, 2015.

These pictures are in no particular order. 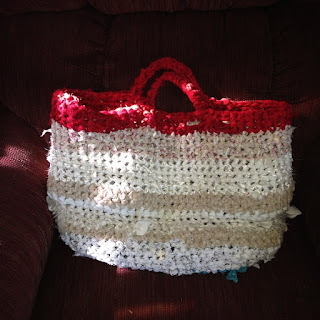 Apparently I finished three more crocheted fabric bags since the end of October. 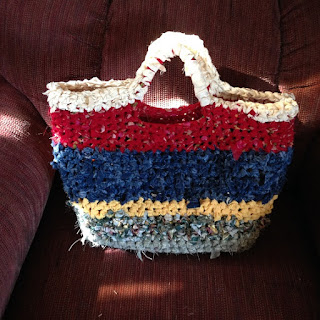 There's one done in shades of blue sitting by my chair in the other room also. All of them are oversized purse size. All of them done in reclaimed fabric from garments of one sort or another. Mostly cottons. 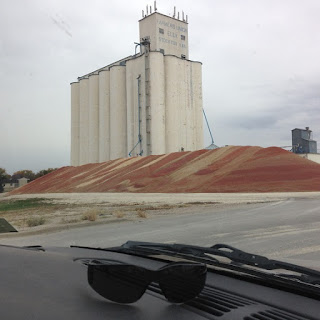 Milo harvest is all done and over with now. This is the at the Coop in town. A big pile of milo!
The vultures have all gone away also. I took this picture a couple weeks ago on an excursion into town with Ma. 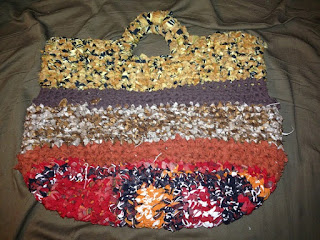 Hmm....guess there are four bags. Not three. I did say the fog had rolled in. 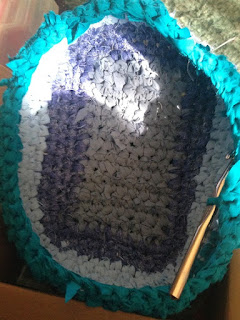 And here's the inside of the blue one.
To my defense...(for appearing so scatter brained) I uploaded all these pictures yesterday and didn't get around to writing the commentary till this morning. I'm still working on my first cuppa coffee. 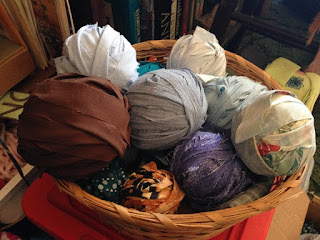 I've made a few more balls of fabric yarn. 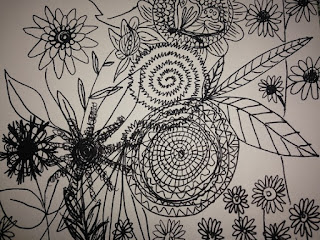 Did some doodling on drawing paper 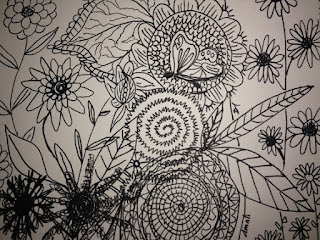 With a black sharpie. These are about 6 inches square. 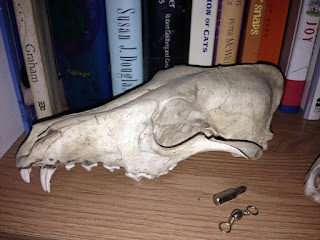 I acquired a new skull for my collection. This is a coyote. 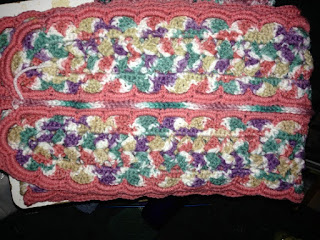 I'm almost done crocheting this afghan together. I didn't crochet the long strips of multicolored yarn, nor the pink edging. These strips were already crocheted when I got them. There are seven of them. I crocheted the strip running down the center of the two to hold them together. I have three pairs of two put together at this point. 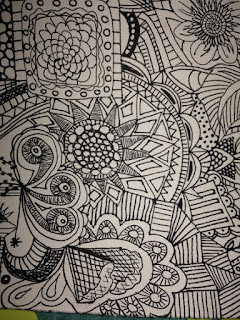 Another sharpie drawing on drawing paper. 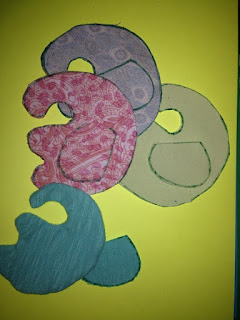 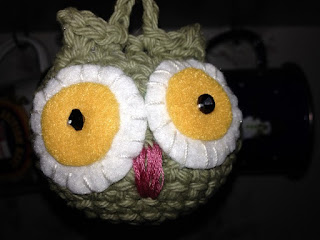 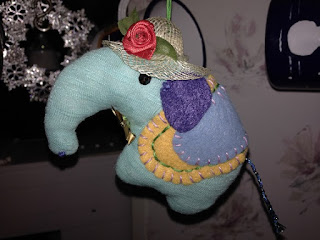 This is blue ellie from the batch above. She's all dressed to go a'travelin' to Nanner's house and beyond!
The pink ellie is almost done but you won't see her picture till I get back from my kidnapping cause I don't know how to do blog posts from my phone. 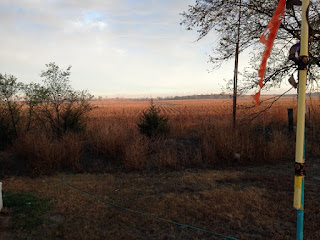 I don't see any cows on that milo field outside my door. The coyotes have been out in force the last couple weeks. One of them got the male duck, Donald, last week. So we're down a duck. :(  So now there are just Eric, the mean black rooster, two white hens, a red hen and a little white duck, Daisy. 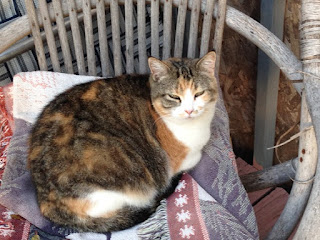 Miss Lola chillin' in the wicker chair on the front porch on a sunny day. 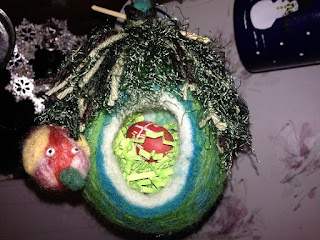 Bird's nest ornament. I did some needle felting on this one. I cut the nest off a rock I had put it on sometime last year. So that was already done before I ever started. Needle felting takes time and patience. The little bird was half done when I found him, digging around in the box where all that stuff lives, so I didn't do a lot of needle felting on him. The stuff atop the bird house is eyelash yarn and cotton yarn. The egg inside is a wooden egg that has some geometric shapes painted on it. I didn't paint   the egg. It is about 4 inches tall, 3 wide. 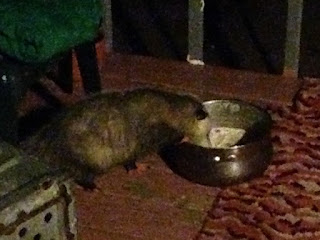 Mr. Opossum was back. I guess I invited him because I am the one who sat that pan of ham and potato soup out there on the front porch. Set the buffet, they will come! I was in the house when I took his picture. He came another evening after this dinner event. It was a few days later. I didn't get any good pictures of his second visit. It was raining outside and the front window of the door was covered in rain drops. The camera refused to focus on anything but raindrops. I don't really care if MO comes for a visit occasionally, I just want him to stay outside where his kind belong! I have just named him MO. 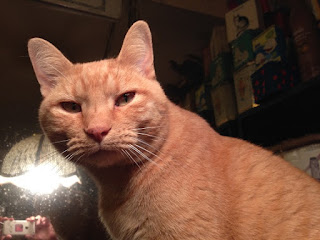 Tommy sittin on top of the computer monitor. Tommy is a bully to Lola and Murray at times. He acts all big and bad and makes them hiss and cower at him. He gets in this stance where he's kinda turned sideways and his tail is standing stick straight up in the air. He's a sweet sweet boy to people though. He doesn't fight with the girls, just lets them know he thinks he's top dog! At least once a day we have some drama out of Tommy with his attitude. He doesn't listen to a word you say to him. But he'll gladly back down if I get up and physically move him away from whomever he's antagonizing.
He really is a sweet sweet boy to people though. He loves to snuggle on your lap. He jumps up on my back to get up my desk where the computer is. He's just a big ol' pussy cat most of the time. He was a good addition to the household. He's a decent mouser too. Despite having no front claws, he's brought me a couple of mice and he's only been here about a month. 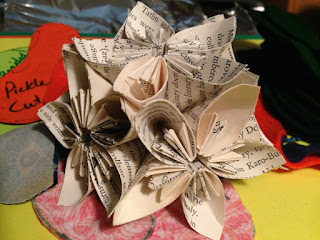 I started a kusdama flower ball. Half done! I'll take it along on my kidnapping and finish it.

And I've been making pickles. More on that next time....

I have no idea how long this kidnapping will last. At least 11 days is the best answer I could get out of the boy. So somewhere around two weeks. The reason for this sudden kidnapping, which I was pretty sure would happen 24 hours before it actually did come up is that someone has died.  And my son thinks I should really go to this funeral. I'd rather not be kidnapped at all and just stay home, but I agreed to the kidnapping so I am going to enjoy myself while it occurs!

I'll see you all sometime in December!
Remember....
be good to one another!
It matters!
Peace
831
Posted by Donna at 5:17 AM

You still have more going on than I do woman! I Love your ornies for Nanner's swap...Tommy cat looks like he's trying to pose as a tough cat. MO still scares me a little, but his pics are kewl. :) Have a happy kid napping!