A harrowing Tale, A New Cat, Some Crochet and a few little birds

It's the first of June.
I got a no seat belt ticket in Plainville on Saturday. Dang it! He caught me red handed. It is the law to wear your seat belt in Kansas and I do understand the reasoning as to why it is law. No one WANTS to peel someone off the roadway. I don't like wearing my seat belt. Had I been wearing my seat belt when my eldest son and I rolled four times through a barbwire fence, I would not be here to tell the tale. Therefore I sometimes don't wear it. I'll pay the $10 and try to remember that I could of used that $10 for some new art materials instead of being obstinate!
I truly wouldn't be here had I been wearing the seat belt on Christmas Eve of 2000. There was nothing left of the front passenger's side of that Bronco. That's where I was sitting when the boy, he was 17 at the time, hit black ice on the highway and we went spinning into the ditch at an intersection to a dirt road off the highway.  We plowed through the stop sign, over the culvert, hit the grass, rolled, taking out seven fence posts and landing on the wheels, much worse for the wear.  I remember rolling four times, might of been more. I was in the back seat with my head stuck halfway into the plastic panel on the back passenger's door. Knocked out. I came to with the boy hollering, "Mama! Mama!" cause he wasn't sure where I was. I could not move at all. I was face down on the back seat.  He held on to the steering wheel for dear life throughout that terrible ride. He was on his feet, but he was hurting. He had dislocated his shoulder not a week before. A car came by quite quickly and RJ flagged it down. The lady was a nurse so I was in good hands till an ambulance arrived, along with the fire department to cut me out of RJ's mangled, beloved Bronco. They were 14 miles away.  We were about 75 miles from home, on our way home from dropping the other son off in Oberlin. RJ wasn't badly injured, but I wasn't doing so well.
All turned out as it should have though. I'm still alive and kicking. I will try much harder to remember to put my seat belt on, even though I won't like it.
I need to stay out of Plainville. I've only gotten 2 tickets for driving in my entire life and both of them were handed to me by a Plainville policeman. The first one was for speeding, I was doing 40 in a 30 at 6 in the morning. I was late for work, not cause I got a ticket, but because I slept through my alarm that morning. I would have made it on time if I hadn't had such a lead foot that morning. That happened almost 20 years ago!

I got a couple of new pets since the first of May. Another will be arriving in a few days. Toby is coming to live with me cause he's not a city dog. He is way too protective of his people and RWson is afraid he will end up getting into trouble with his over protectiveness. So he's gonna live in the country with me instead. Toby is a cross between a beagle and golden retriever. He's a sweet boy and should do fine with me. He's always been a country dog. 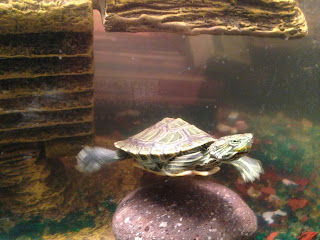 This is Little Turtle. His name was Donnatello when I got him. He has no name at the moment. I think he might actually be a she though. At any rate, I now have an aquatic turtle. He's a red slider. He's about 3 inches from front to back. I acquired him while at my eldest son's house one week ago. He was in need of a new home so I said, "Sure. I'll take him home." He came with all the equipment needed to keep him healthy. I hope he stays healthy. I've never owned a turtle before. 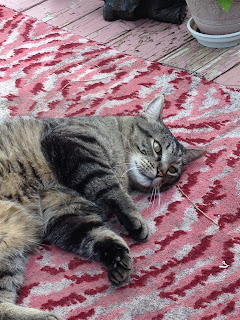 This is Dennis. He and Toby know one another well. Dennis came to live with me for the same reasons Toby is coming to live with me. Well, except for the over protective attitude. Dennis could care less who shows up. He's always been a country cat and RW didn't think he would do well in the city. And besides that, they have two other cats and another dog. Darlie is a tiny little Chihuahua. She'll do fine in the city.
Dennis is a big lush. He likes giving head butts, sleeping on my keyboard when I'm not using it and sleeping on the empty spot on the shelf behind my desk. He and the other two, Lola and Mo, have come to terms and the yelling, yowling, bitching and moaning have ceased. Everybody gives everybody a wide berth and they seem to get along just fine. Dennis hasn't earned a spot on my  bed yet, but I am sure he will claim a spot eventually. 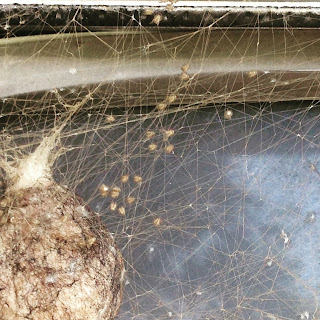 I found the picture of the baby spiders leaving the egg sack. I do hope the majority of them survived.
I made 8 little books yesterday. 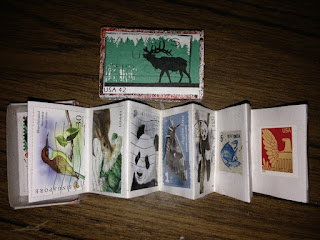 Matchbox book with accordion pages.The pages have cancelled postage stamps from around the world with animals on them. Both sides of the accordion folds have a stamp on them. I painted the box with gesso and then sprayed it with two different colors of dye. 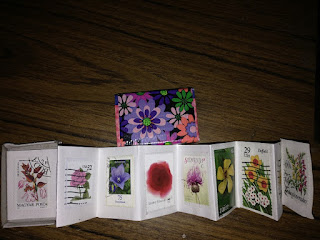 I had never made an accordion folded matchbox book before. I made another one with flower stamps. The box is covered with flowered duct tape. 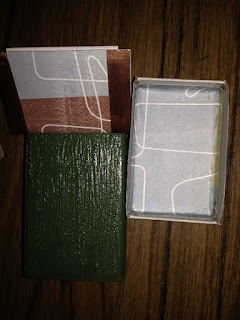 this one is made like the one below, with sewn pages. 18 pages in each of 3 signatures. The book cover is made from chipboard and scrapbooking paper. Along each edge I put some copper foil tape.
There are actually three that were made this way but I forgot to take a picture of one of them. 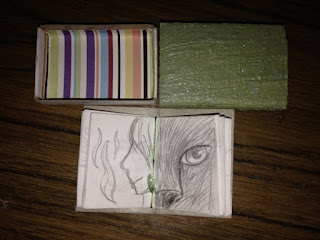 They each have different papers on their covers and in the bottom of the box.
Allison filled all the pages in this one with pencil drawings. 33 little drawings. 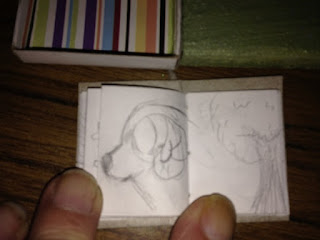 I chose a few randomly to show off. 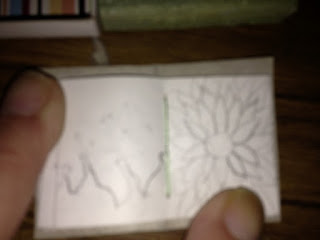 This one isn't too good on the photography end of things. 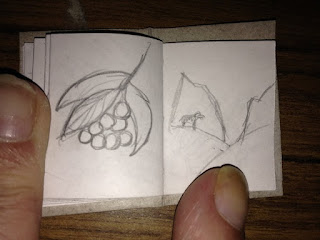 I like the right one.
The matchbox books are tiny things. They fit perfectly in the matchboxes though. 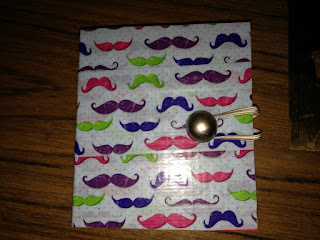 This book is about 4 inches square, though it's a tad taller than wide. This one and the next one were made from boxes that prenatal vitamins in. The mustaches are duct tape. It wouldn't stay closed on its own so I sewed on a plastic gold button and some skinny elastic. 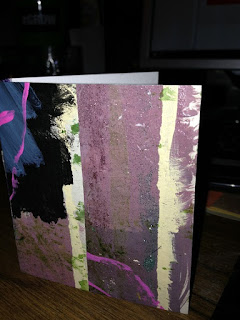 This one is exactly the same as the mustache book except it has painted newspaper scraps for its cover decoration.
I made another one from a box that smoke bombs came in at Independence Day, back in July. It's roughly the same size as these two, but it has green glitter tape and copper foil tape on its cover. I forgot to take a picture of it. 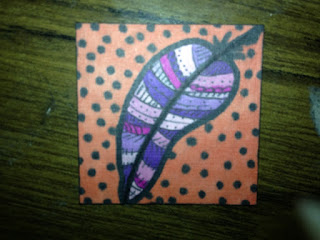 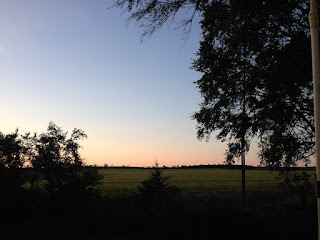 this was supposed to end this post!  The north field at sundown a few nights ago. The wheat is growing nicely. I had hoped the late snowfall in early April wouldn't kill it. The farmers were a tad worried about that snow storm. The wheat was at the stage where the heads start growing and a hard cold spell could have been its demise. Thankfully it wasn't. The loss of the midwest wheat crop would have caused baked goods to go sky high.
I'll take a walk out there tomorrow and get a picture of it close up so you all can see what wheat looks like when it's almost done growing. Harvest will start in about 3-4 weeks. 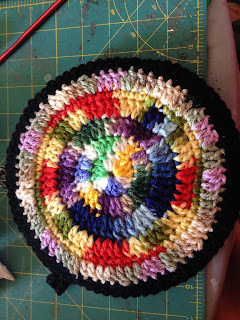 I crocheted some.  this is one side of the hot pot holder I gave to Ma this morning. 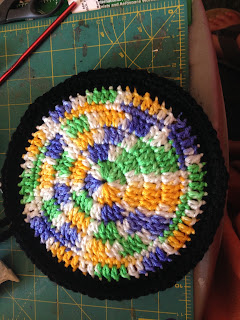 Here's the other side. I crocheted this a couple days ago. 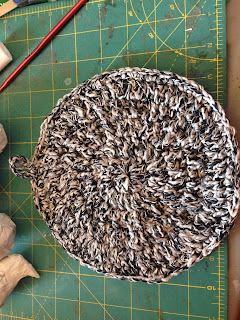 Another hot pot holder. It's the same on both sides. Gotta have two layers of acrylic yarn if you want a hot pot holder that will not burn you while in use. I crocheted this one early this morning. 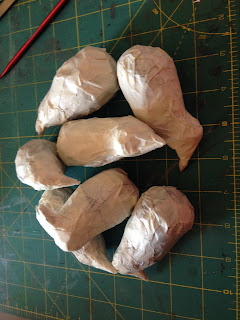 After I finished the pot holder, I made the beginnings of some paper mache birds. I see only 7 in this picture but there are 9 of them laying on the table on the front porch covered in newspaper strips and watered down glue, drying overnight. Tomorrow, they get wings and tails. And maybe their legs too. I forget if I should put the legs in before painting or after? Saturday, they get painted.

I guess that's all I have for the time being.....
Thanks for hanging in there till the end.

Remember...
be kind to one another,
it matters!
Peace
831

Your newest pets are lucky to be staying in the country with you. Also, I believe your turtle was named Donatello after the cartoon character from Mutant Ninja Turtles :)

As always, your projects are fabulous...can't wait to see the finished birds...'cause you know what a bird geek I am! LOL!