A Very Big Bowl and Some Wingless Birds

Hi Readers!
I'm still sewing but not near as much of late. I have a new sewing project in the works along with the dotees and monsters that are still brewing in my head! I'll show it off another day though cause it's barely started and it's going to take a very very long time to finish this project! I'll update you as progress is made. Not much progress HAS been made of yet so you'll just have to wait.
I cut 2 inch squares of fabric yesterday for the aforementioned project.
I've had my hands in tissue paper, glue, newspapers and masking tape here in the last few days.
I finally figured out another use for all those magazine page sticks I was obsessed with making late last year. This big bowl incorporates a few of them. My paper mache clay went sour on me and it smelled to high heaven but I used it anyway to cover the outside of the bowl. That was three days ago. The bowl has lost that sickly sweet smell and doesn't stink at all once it dried well. 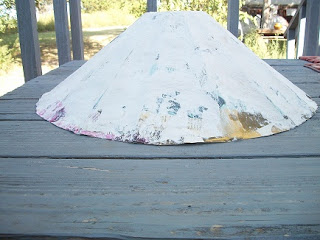 I haven't actually measured this bowl but it's pretty big!
I took some of those paper sticks and made a disk out of them with some masking tape to hold it all together and then I took more sticks and taped them to the disk in a sunburst around it. After that I took the sticks and taped pieces of newspaper between them to make the sides of the bowl.
My son acquired three cases of brochures for me awhile back. I used them to paper mache the bowl. After the first layer on either side of the sticks I put a thin layer of paper clay on the outside of the bowl to give it a bit more stability than paper alone would.
I used Modge Podge for the glue on the bowl.
The brochures are made from newsprint paper but it's a much better grade of newsprint than newspapers are printed on...a bit thicker and sturdier, yet still quite absorbent like newspaper is. It had lots of colorful pages and lots of 'strange' words and pictures. These brochures were printed for the coalition for a drug free america. My son got them from the police chief in the town where he lives. The brochures were headed to the landfill and my son asked if he could have them.
I used only one box of brochures. Each case has 48 boxes in it. Each box has either 10 or12 booklets in it. The boxes will come in handy for altering too. Was a good find on the boy's part!
He is very good friends with the police chief and he was down at the office talking to him when he was cleaning out the storage locker at the station. The boy brought me a few other goodies that day as well. 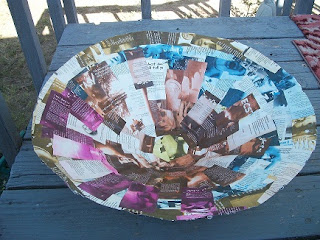 I've no idea why these brochures were still sitting in the storage locker. Perhaps because they recieved many more than they needed? I'm not sure. I just know they were being thrown out and I've trained my boy well to spot such finds!
I have my own ideas on the so-called war on drugs in America. Some are bad, some not so bad. This isn't the place to discuss the merits or the downfalls of the so-called war on drugs.
I was just happy to have something to do with some of those brochures!
I believe when this bowl is done I will give it to my sister to put in her store to use to hold little things. A display bowl, if you will. I plan on building it a pedestal out of a carpet tube, a pizza box and more paper mache. You'll all get to see the finished product!
I was putting the last coat on the bowl and decided I'd give these little birds a shot as well. I had seen them somewhere on the web! Sorry I don't remember where....I go searching for ideas frequently, not saving them all to the hard drive on the pc, but to the hard drive in my head instead!
The last coat of paper on the bowl, which I haven't photographed yet, is a layer of white tissue paper over the colorful brochure paper.
I liked the way the tissue paper took the glue...sucked it right up! So I decided the birds would be mached with tissue paper. 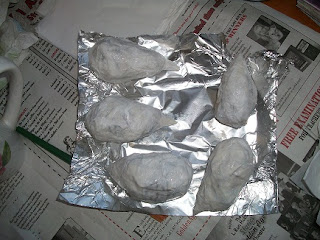 As you can see they are wingless at the moment. No tails either!
They are made by taking a quarter sheet of  a newspaper page, wadding it into a pear shape and taping it up so it holds it's shape. Twist a beak shape on the small end and paper mache it.
Next post I'll show you the birds with wings and tails and feet and maybe even painted! Don't hold your breath for painted birds in the next post! I still have to make their feet. That might take a day or two.
They are on the kitchen table with their wings and tails attached, drying.
I have done
zip
none
nada
in the drawing department since the last post.
Perhaps next post will bring some drawing or painting, who knows with me!
You all be good to one another!
Smile!!!!!
Peace
831
Posted by Donna at 11:41 PM