Red Flower Ornaments and some other stuff

Hello Readers!
Just as I started this post that silly Lola cat decided she needed a nap on the desk. When I let her nap on the desk, she sleeps laid out between the keyboard and me with her head atop my right arm. This works out OK for both of us when all I'm doing is playing Mahjongg or some other mindless game, but it doesn't work for me when I'm typing. She had plenty of my time throughout the night when she slept on me. I woke up to a cold kitty nose about two inches from my own nose! And my feet were nice and warm with Billy's head draped over them. Fred's not allowed in the bed. He has his own pallet to sleep on.
He forgets he has his own bed sometimes and sneaks into mine when I'm not in it. He always looks so defeated when I catch him there...I'm holding strong though! Dogs are not allowed on the bed!
It's a beautiful day in my neck of the woods and the critters can't decide if they want in the house or out in the sunshine. My weather page is telling me it is 58F.
I've just let Fred and Lola outside again. Fifteen minutes ago I let all three of the furkids IN the front door. Gonna be a busy day of donning my butler's outfit!
Looks like you're in for some chatter before I show you the Red Flower Ornaments
Ma got a new cat with built in extras. This lady had a mama cat and four kittens she wanted to give away. She was already trying to give these tiny kittens out to anyone who'd take one. They aren't old enough to be taken from mama yet! She wanted to give all the cats away cause she was moving and couldn't take them with her. Ma only wanted a kitten. She's been hunting for a new kittens for months now. She took mama and the kittens when she saw the two little siamese in the bunch. 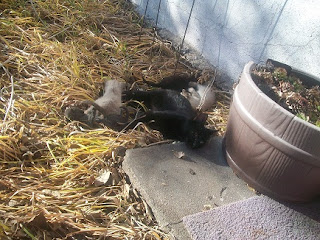 Sorry it's not a very good picture. I want a new camera!
Not sure how I managed to walk to Ma's house without Fred right on my heels but Ma and I had a good ten minutes of kitten time without that fool dog sticking his nose in the thick of things! He do love himself some kittens! Mama Cat wasn't too impressed with that big black dog sniffing her kittens. She didn't attack but she growled the whole time Fred was near. He paid that cat no mind at all and just kept on sniffing!
I think the only thing that saved him from an attack of black cat is the fact he's a BIG dog! Mama Cat only knew about little dogs. About 10 little dogs that did not like cats! I think she wasn't quite sure what to make of that big black dog, that and Ma was petting her telling her Fred wasn't going to hurt those babies.
Those babies are ADORABLE~! No, no, no. I don't need another cat.
Ma's already got the little gray kitten given away and she's going to keep the two siamese. She's thinking she might keep mama cat too so all's that is left is the little black kitten to find a home for. I do not need another cat. Two is plenty, thanks!
After we mauled kittens for a few minutes we sat in the livingroom shooting the breeze and I said I was headed home. Ma said she'd give me a ride to home. She lives two doors down from me...about a city block away....anyway we get in the truck and she drives right by my driveway and says we are going for a ride in the country.
I was glad I had the camera along! 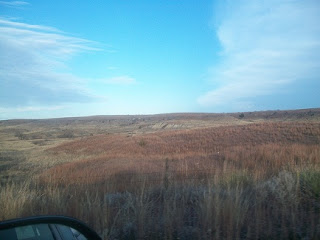 Pictures don't do these hills justice! They're gorgeous this time of year!
We took a drive of about 20 miles or so...out in the middle of nowhere! I'm not sure just how many miles it is on the route we took. It's a nice drive though. Even better when you're the passenger, as I was!
We stopped on the bridge on 20 road to look at the water and look who was looking back at us! 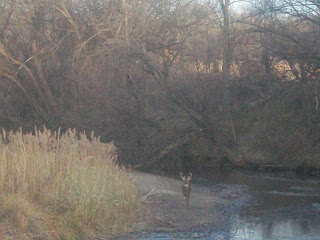 I zoomed in as far as I could. He just stood there, looking back at us. The flash on the camera didn't seem to sink in to him. He was awfully pretty and mighty nice of him to pose for a picture! I think I got six or seven shots of him before he took off. This was the only living wildlife we saw on our drive.
The spot the deer was is only about a quarter mile (as the crow flies) from my front door. There's really not a lot of water in the river right now. That's the Solomon River.
It was a great day for a drive. I'm glad Ma kidnapped me!
I promised you red flower ornaments in the title of this post. 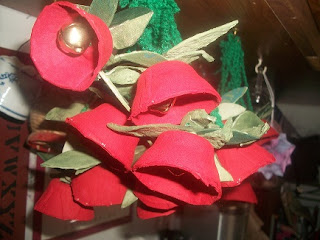 Egg cartons, green yarn, gold jingle bells and acrylic paints.
I love them! I ended up with 28 of these. Still seven more to be put together but they will have to wait till it's time to paint the new hatch of paper mache birds. I ran out of green leaves when assembling these. 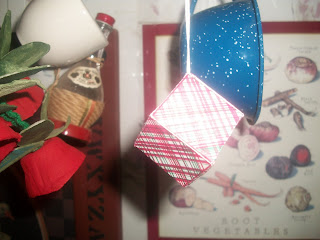 This is a terrible picture of an inchie cube colored with sharpies. It's simply a cardstock box on a string. I inch square. I made five of these things and forgot to take a scan of the four I sent off to Scotland a few days ago.
I have the makings of nine birds drying on the kitchen table. I started on them day before yesterday. All of them have tails, only one has wings and a tail. They're coming along though.
Paper folding for the Paper Flower Ball Ornaments is going slowly. I got one whole ball made yesterday but it wasn't really progress. I made it out of copy paper that I wrote some poetry on in red sharpie. It turned out pretty cool. I have yet to take its picture. I have enough paper cones folded to make about 2 entire balls but I need at least another 7 to have as many as I'd like to have.
I've determined for this project to be a success I will need 14 of each ornament.
Here's the rundown of what is already in the works: 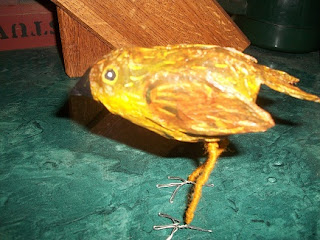 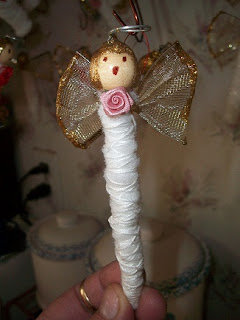 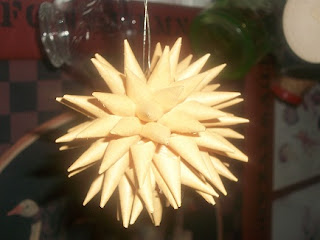 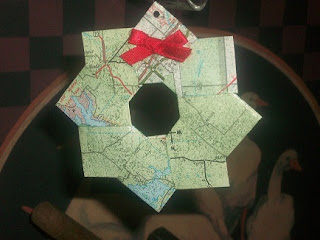 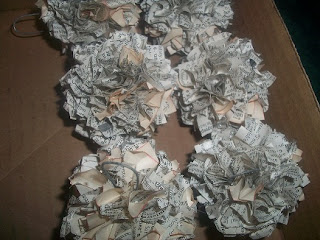 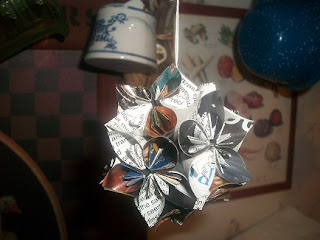 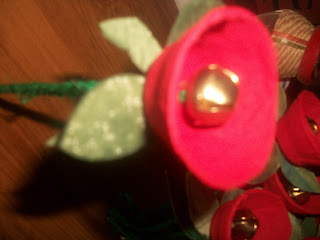 9
Inchie Cubes
(not this particular inchie cube though...will be the ones I showed you all some posts back that are made from inchies and taped together. This is one is made from a box template.)
have: 34
I still have to come up with three more ornaments and finish up what I need from these on the list already started. I have about 40 days to do that....
I have cut the covers and some of the paper for 22 little book ornaments. Those will take a few hours to finish preparing and an afternoon to put them all together.
Still a lot of work to do in 40 days!
I'd really like to have an even dozen ornaments for each gift. That isn't set in stone but it's a much nicer 'set' than say 9 ornaments, or 10 or 11...I'm shooting for an even dozen! We shall see if that happens or not!
So I'm busy with my hands and staying out of trouble!
Be good to one another!
It matters!
Peace, my friends!
831
Posted by Donna at 1:02 PM

what a beautiful place to live...am jellyass. Awww those birdies are so cute- and I love that angel too.