Stars, Books, and a few Other Interesting Things

I'm either gonna die cause a doc got it wrong or I'm gonna live awhile longer cause a doc got it wrong. I do not like doctors right now because they have confused me even farther than I was confused before I was informed I don't really have polycythemia vera and I've never had it.
Doc's exact words were, "If you had PV, you'd be dead by now."
I'm confused because I went to see the hematologist because my hematocrit numbers were high. I assumed he'd give me a phlebotomy and send me on my merry way. I was mistaken apparently. He didn't and will never again, give me a phlebotomy because I don't need one according to him.
I should back up. This doc I'm talking about has never seen me before the day before yesterday. The doctor who diagnosed me PV, six years ago, ran off to practice somewhere else and this other guy was put on the case. The new guy tells me I have high hemoglobin numbers cause I smoked. I think the man is so full of crap his eyes are brown! (And they ARE brown~!)
I'll be getting a second opinion on this newest diagnosis.
The way I see it, the new guy is saying the old guy didn't know what the hell he was talking about and he was treating me for something I didn't even have and further more, they apparently don't give phlebotomies for PV now anyway.
A phlebotomy always made me feel better. New doc didn't seem to believe me when I told him that. He tells me most people feel much worse after a phlebotomy. He said I would just have to donate blood from here on out. Well, you know, that's all fine and good and I will attempt to do just that but the Red Cross doesn't want my blood! They want it cause I have diabetes and they won't want it if the hemoglobin and the red cell and the white cell counts are all elevated. So I'm stuck with this bad blood in me whether I like it or not for the time being!

When I'm stressed...and I AM stressed right now...I make things.
I'm on a Polish Star kick at the moment. I cut out enough rounds of magazine paper for about 20 more of these things just today. 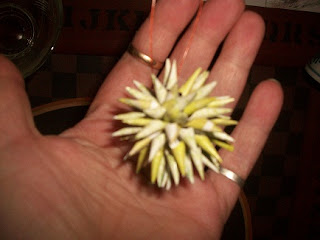 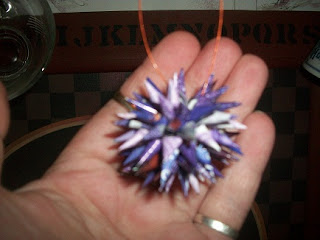 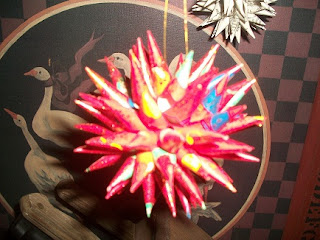 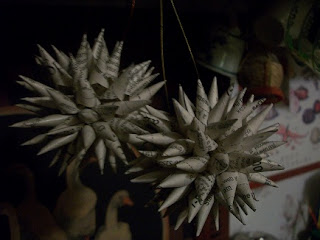 And I made a few books over the last few days as well.
Here's two of them.
There is another one almost finished, just need to figure out what I'm gonna do with the strings hanging off the binding. When that happens, you all will get to see the finished Red/Yellow Board Book. Probably in the next post. 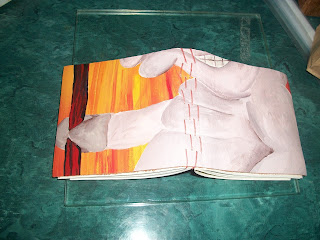 Pig Book #1
4.5 inches square
onion paper pages-40
The cover is part of an acrylic painting of a pig holding a trident. It was titled 'Deviled Ham'. I got it in trade for one of my monsters. There is enough of this canvas left to make another book the same size as this one and one that is about 3 inches square.  I glued some orange sweater material to the inside of the cover before I bound it in a long stitch pattern. 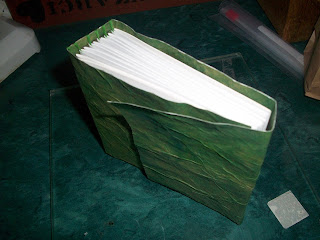 Green Tyvek Cover Book
Copy Paper Pages-50
5x5 inches
I'm thinking this one really needs a closure of some sort. Will have to think on it for a bit. I wasn't really pleased with the leather button closure on this book's twin. It might not even get a closure. I don't know. 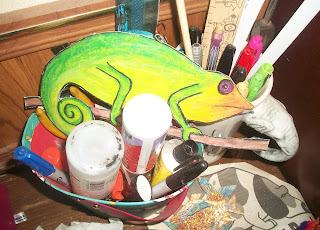 I watched a few videos about the use of oil pastels and learned a great deal! There will be more oil pastel drawings in the future. I'm now on the hunt for a better set of oil pastels. 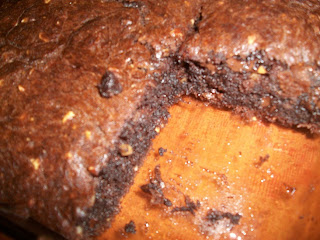 I did some baking.
Sour Cream Chocolate Chip Banana Cake
No icing required. Moist, chocolaty and so very yummy with a big tall glass of ice cold milk. It doesn't actually have sour cream in it. I traded out the sour cream for plain yogurt. And I didn't have any vanilla in the cupboard so I just skipped it. The recipe calls for walnuts (and it would be scrumptious with walnuts) but I didn't have any walnuts so I ground up some mixed nuts (mostly peanuts) and substituted those instead. You were also supposed to bake this in a loaf pan but I didn't want to wait an hour for it to cook so I used a cake pan and it was done in just over half the time.  I wish you could smell it! 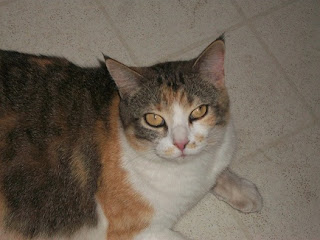 This next picture is kinda creepy and cool all at the same time.
I took this picture out my back door looking west towards my sister's house. 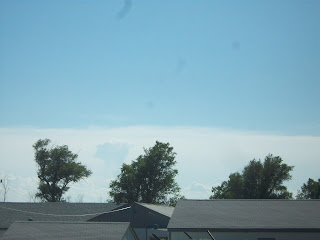 It really doesn't look like much unless you click on it and take a look at the cloud between the first two trees in the picture.
I had just come home from town and was checking the mail when I noticed this cloud. It took me a minute or three to get the van parked and come in the house to find the camera to take a picture of it. It really hadn't changed much though.
Does it look like a devil figure to you? Cause that's exactly what it looks like to me!

Be good to one another!
I'll try not to stress too much about the doctors and their diagnosis of my health. I can't control either of them so I shouldn't be stressing about it in the first place!
Do be good to one another though....
it matters so much more than we realize!
Thanks for reading!
Peace
831