A Bit of Art

Hello Everyone!
Been awhile since I had anything to say on the blog. I've been fighting with my body to cooperate with living. I have a blood disease called
Polycythemia vera.
It is giving me a bit of trouble these days in that I am very tired, no energy to speak of and I sleep more than usual.
Hopefully, come Wednesday, the 6th of June, that will all be taken care of with a good old fashioned bloodletting! Yes, I know it sounds medieval, but it is a very good thing where the PV is concerned. A phlebotomy (the modern term for bloodletting) is basically the same procedure as giving a pint of blood. Only difference is that they don't use that pint of blood, they throw it away! Can't use 'bad blood' to cure another, unfortunately. It always makes me a bit sad the blood they take out of me can't be broken down into its components and put to use to help another.
When one has PV their bone marrow makes too many red cells, too many white cells and too much hemoglobin. Our blood is quite thick when our numbers get too high. Hence the no energy to speak of!
To top off the blood disease, I also have fibromyalgia, diabetes, gout and a spinal cord injury from a car wreck some 11 years ago. With all of these medical issues I have a great many symptoms that stem from the different ailments.

And even though I haven't much energy and I sleep way too much, that doesn't really stop me from being creative. It doesn't take a lot of energy out of me to sit and make things. 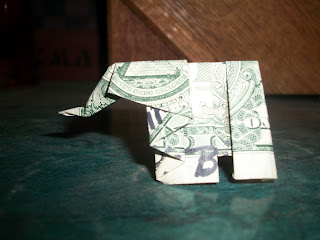 Money Origami
A US $1 bill folded into an elephant.
There is writing on this bill as you can see by the big B on the ellie's foot. I put that writing there. No, I won't tell you what it says. It isn't important. 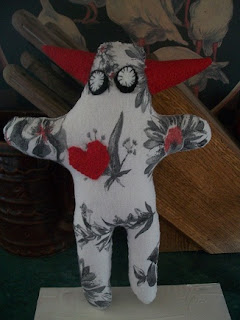 Red Horned Black and White Flowered Monster
He's made from a T-shirt, red fleece and felt. He's about 11 inches tall, sewn with  crewel embroidery yarn and stuffed with polyester fiber. This fellow went to live in Texas. In exchange for this monster, I received 2 painted canvases to play with. Little books will appear before long featuring the canvases as covers for said little books. 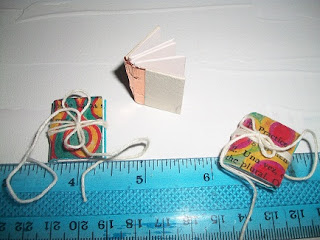 Three TINY Books
The one in the middle is coptic sewn. It has 9 pages of linen resume paper. the spine is covered with copper foil tape. I did that because the coptic stitches weren't very tight and the book was quite wobbly before the foil tape helped to stabilize the spine. This one is 3/4 inch by 1 inch. This one would be a great addition to a dollhouse library! I do not own a dollhouse though.
The other two are fabric paper that was made with a spanish learning textbook. I made the designs on the books with markers. The inside of the covers are lined with turquoise colored t-shirt material. One of them has 9 pages, the other 12...regular copy paper for the pages. They are sewn in the pamphlet stitch with crochet cotton. The ties too are crochet cotton. They are approx. 3/4 inch by 1 inch. 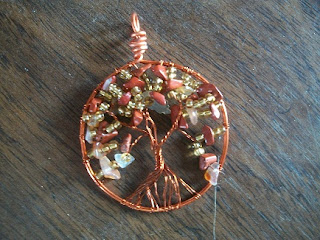 Tree of Life Pendant
Copper colored aluminum wire makes up the outside circle. It is approx 2 inches across. The tree is made from recycled copper wire that came out of a dead electric motor from some small appliance. The beads on the tree are gold colored glass seed beads, jasper beads and quartz crystal beads.
I'm thinking I need to invest in some leather cording to make these into actual necklaces or whatever. I personally think they end up being a big large for a pendant but a cord of some type would make them much more marketable. 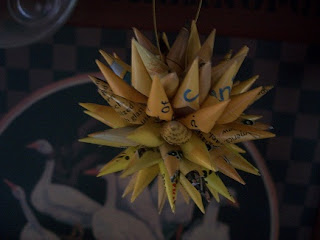 Polish Star
Yellow magazine paper and jewelry wire.
I'm back on a polish star making kick so expect to see more of these.
I spent yesterday cutting circles out of a Western Interiors magazine to make more of these. And I also started working on another one with circles cut from an old phone book. The phone book pages are not ideal for a polish star so I'll probably not make more than one from the phone book pages. 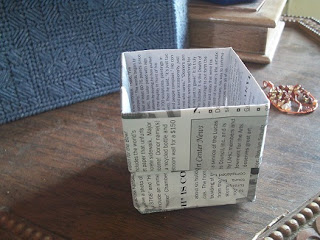 Origami Box
Made from a newsletter from the Grassroots Art Center. The instructions for this box used a single double sheet of newspaper with intentions of making a trash box. This would work wonderfully but I didn't need a large box so I used a 8.5 x 17 inch sheet of paper. It's a nice sturdy box about 3 inches square. I will be making more of these and perhaps using them for armatures for paper mache boxes. It's all in the experimental stage right now. 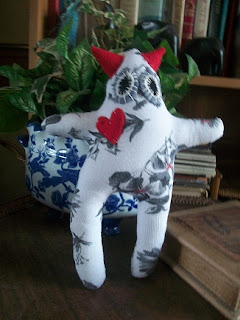 Another Monster!
Grey Eyed BWR Monster.
This one is made out of the same shirt as the last one in this post. This one's horns gave me a devil of time! I made them too short to contain the fiberfil to make them plump. It all worked out in the end though and I wrestled those horns into place!
This guy is about 11 inches tall, sewn with crochet cotton thread, regular sewing thread and crewel embroidery yarn. 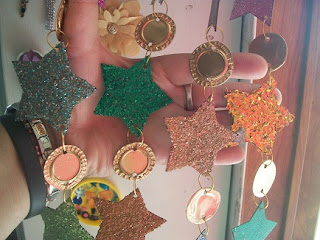 Star and Bottle Cap Garlands
4 of them
I went on another glittering kick somewhere round the middle of May. These are about 6 feet long overall. The stars are recycled chipboard (food boxes) covered with black acrylics and then glittered with every color of glitter I own! The bottle caps are beer bottle caps that I smashed with the little sledge hammer and then spray painted gold. (That smashing session was the ONLY thing I did that day, cause smashing about 100 bottle caps wore my ass out!) They are held together with jump rings made from craft wire by wrapping wire around my needle tool handle. The colors on the picture are a bit out of whack. That star that looks orange (at least on my monitor) is actually gold. They are much brighter and sparkly in real life.  There are still about a dozen glittered stars to do something with. I'm thinking another garland, but with 2 bottle caps between each star instead of one. 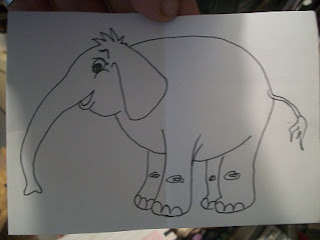 An unfinished elephant drawing. This elephant is in the middle of a little book made from one sheet of paper. Not sure what will happen with him. Maybe nothing. Maybe he'll go in another book. Maybe he'll end up on a canvas, I just don't know what I'll do with him. 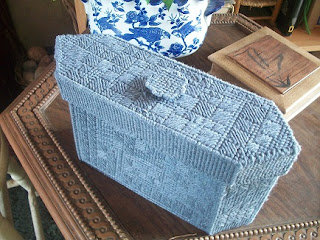 I spent weeks working on this plastic canvas box. It looks good in the picture but that picture is quite deceiving! The lid doesn't fit the bottom of the box properly. I think what will happen is I'll make another bottom for the lid and another lid for the bottom so they both fit properly. Don't hold your breath for them though cause it may take months for this to actually happen! 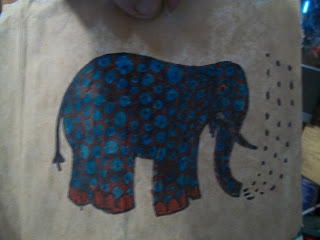 And another Elephant drawing.
An ugly elephant drawing, but a drawing nonetheless.
Markers on brown kraft paper. Not sure what will become of this fellow either. The drawing is about 5 inches square or so.

In the last post I showed you all the red/yellow book covers that I had been working on. The pages for that book turned out wonderfully! They dried nice and flat like I wanted them too. I attempted to bind that book the other day but I did that binding wrong and when it came time to tie it all off, the book fell apart! Back to square one! So I've been busy braiding orange crochet cotton into long strings to attempt another try at binding the book. Braiding crochet cotton into 40 inch strings takes a bit of time! About an hour for each string and I need five of them for the binding. I still have one to make before I can try again. I think I know what I did wrong the first time so we shall see if I have my act together for the second round.

As usual there are many projects in the works! I'm experimenting with stiffened felt to create some lidded boxes. If I can figure out how to get those damn things to cooperate I'll have accomplished something pretty cool. So far, after three attempts, that has not happened yet! I'm a patient soul though and I'll give it a few more goes before I give up on it completely.

I also have a long stitch book in the works. The covers are done, just waiting on me to cut the page block and sew the thing together! This one is not done yet cause I just haven't done it yet! No troubles will be encountered in the assembly of the book.

The paper mache flamingo is still on the list of things to do. No progress has been made on him though. He's just not talking to me at the moment!

I am also still working on the toilet paper roll flowers. These things should have been easy peasy to make!  That is not the case! They've given me trouble from day one! I've picked this project up a time or two since I started them back in April but each time I work on them, not much gets done cause they just frustrate me and I give up on making progress with them. Perhaps one day I'll have them off the kitchen table and up on the metal cabinet with magnets on the finished flowers to hold them there. We shall see. Either that or I'll just say to hell with this and toss them in the circular file to make room for another project on the kitchen table.

I'm still working on the snake cane also. I really need to get my act together and get a few canes finished to take to the Art Center in Lucas to put in the gift shop.

That's about it for me today!
I'll be back again in the next few days or so with something else to show, I'm sure!

In the meantime;
be good to one another!
it matters!
Peace, my friends!
831