I've got some new projects in the works. I always have something on the back burner and juggling my recipes to come up with finished product.
Sometimes the juggling goes on for days and sometimes it comes together quite quickly. 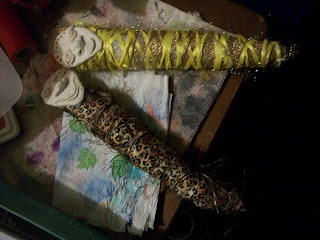 I started two icicle dolls with no idea what will become of them. I was sitting here watching a movie and my muse started screaming about wanting to make faces. So I dragged out the polymer clay and fired up the oven. 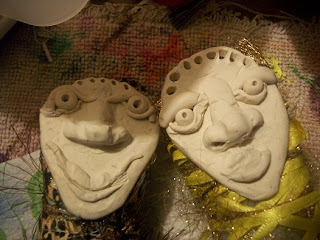 These two faces appeared within half an hour.
Then I wondered what the hell am I going to do with these? They kinda creep me out just a little. I went to the www to surf in search of something to do with these guys. I thought I was shooting for a feminine face. I didn't quite hit that mark.
I found a tutorial for this doll that requires NO sewing if aren't inclined to sew anything on it. I'm still working on these two. I made a crown out of a piece of aluminum foil that once sealed a coffee can. I glued it to the face on the right but it didn't quite work out well. I think we need to get out the big guns! E6000
They need a lot more work before I can call them done. 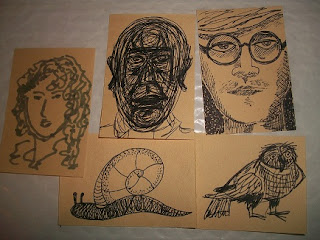 I did some drawing. The girl is in gray sharpie, the rest are black sharpie. All done on manila paper. 2x3 inches
I did all of these in a space of 45 minutes or so.
The guy with glasses will be mounted on an ATC base and go in my own collection. The bird will probably end up on a book cover and who knows with the other three. 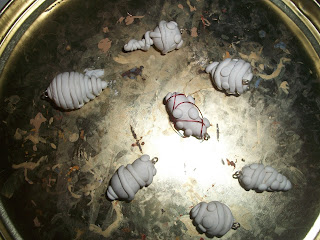 While I had the polymer clay out and the oven fired up, I made some funky beads. I believe they'll get a splash of color before I call them done. None of them are longer than an inch. 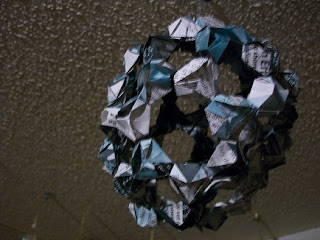 I made another buckyball. Wish I could say this one is a success but it isn't. The ring of units dead center in the picture is the reason this thing isn't ROUND, like it should be. I've made 5 of these things and have a terrible track record of successful outcomes! I've only gotten 2 to come out round. You REALLY have to be paying attention when you put these things together! There shouldn't be any rings of units with seven  units comprising it. There should be only 6 or 5 unit rings. 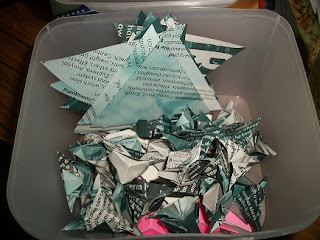 The makings of the buckyball above. I had leftovers from the pink one you saw the other day. I had a few left overs from the green newsprint too. I've started cutting more triangles for the next one. It will be orange and white. I'm using orange envelopes with white insides.
There will not be another buckyball made from the drug pamphlets. aka newsprint.

The previous two failed attempts at assembling a buckyball were not done in vain. I couldn't even get them to close up and become a ball, lumpy or not! I used the units from those two on the last two mixed media fish pictures on large canvases. 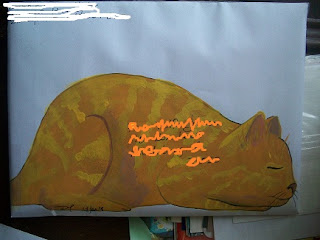 This is the altered envelope for my partner in the altered envie addicts group.
Acrylics on plain white envelope. The tail goes around to the backside.

My old body has been in rebel mode and I've really not accomplished all that I wish I had since last here. Some days I don't even feel like crawling out of bed. Today was one of those days. 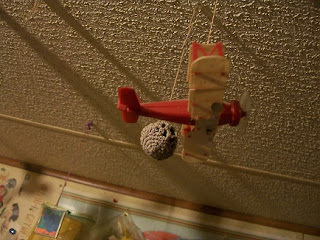 I showed you all the butterfly garland hanging from the ceiling in my deskroom. You all could see all the things hanging from the ceiling in those pictures. I thought I'd show you one of them close up today. Actually there's two of them but it's the airplane I'm really showing off. The thing behind the airplane is a rock with crochet covering it. It's an Apache Tear rock from Arizona. I don't know the scientific name of the rock. I have a ton of them. This one is about an inch across.
I wanted to show off the airplane cause it's one of my favorite things hanging from the ceiling and it is the oldest thing hanging there.
When I first moved to Stockton about 20 years I got three of these little airplanes at the thrift store. I bought them because they were really cool! They're just little plastic biplanes. The green one and the yellow one have disappeared in the travels of life. I've moved 4 times since I moved here in 1995. I found this one out in the burnt house a couple months ago while going through junk out there. It was a good surprise to find it. I thought the airplanes were long gone! Last I had seen any of them was in 2000 when I moved east of town for the first time. The only room in the house that wasn't really damaged beyond help when the house burnt in 2005 was the garage. There was stuff in the garage that had never been unpacked from moving there in 2000. At any rate, the airplane is still around! Just hanging out with me in the room where I create.

I'll be back in a few days with more things to share with you all.
Thanks for reading!
Have a beautiful day!
Be good to one another!
It matters!
Peace
831
Posted by Donna at 9:19 PM