Looks like I've been busy for the last few days what with all these pictures in this post. I can assure you I feel as though I've accomplished little in the arena of life. I really have no reason to feel this way other than the kitchen counter is covered in three days worth of dirty dishes and the laundry is piling up.
My old body has been in sleep mode for a few days. I did a 30 hour stint in bed. Asleep for about 90% of it. I totally missed Wednesday!
It has been said (many times by me alone) that creative people have better things to do than the dishes and laundry! I'll get around to those one of these days!
Probably later today actually...

I must warn you the pictures are awful! I still haven't figured out the scanner. It refuses to turn on when I hit the 'on' button. I've crawled under the desk once to make sure the stupid thing is plugged in. It appears to be. I need to find someone who can crawl around under the desk, behind the cabinet the scanner sits on and can contort themselves to reach behind the cabinet to retrieve all the necessary cords...a stout man with computer knowledge needed.... My old body just laughs at me when I even contemplate the thought of going on that journey again! I had a hell of a time getting up off the floor the only time I've attempted it! And to change out the scanner with the perfectly good scanner out in the burnt house will require someone with the same qualifications to install it in the dead scanner's space. So, pictures will suck until further notice. I do get them 'right' on occasion, but scans of ATCs and smaller art is so much nicer!

In the meantime though...let's take a look at the stuff that's kept the housecleaning fairy in me from getting anything done!

I told you all about the letter openers the last time I was here. I dragged out another half dozen of them and put owls on them. 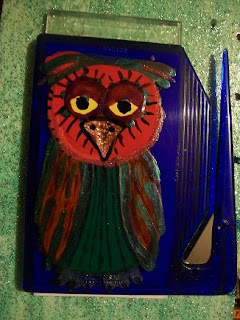 Goofy looking owl, this one is. 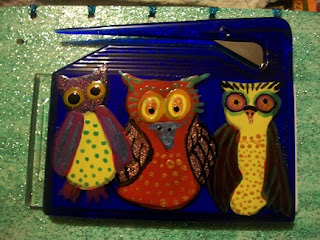 A group of three. 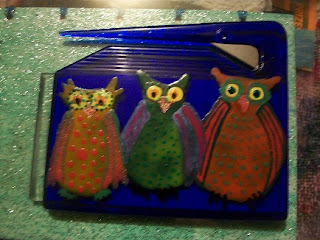 Another group of three. These 3 were the first of the owls started. 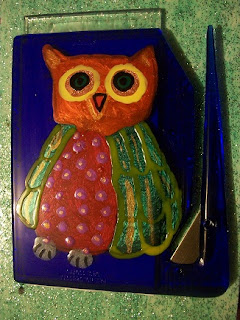 this guy looks like he has paws other than bird feet. 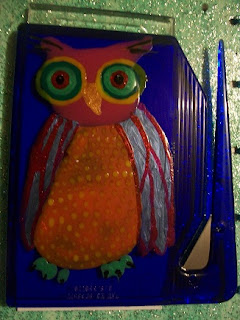 The dots don't show well on his tummy. 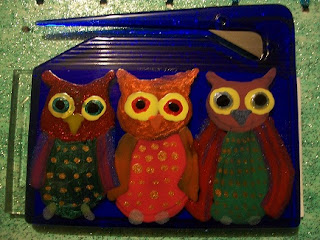 And another group of three.
All of them are done in fingernail polish, same as the flowers from the last post. I like the owls better than the flowers. It isn't up to me which is liked best though. We shall see what the boy comes up with once he gets all the letter openers in the mail. I'll be packaging and sending these come tomorrow.
Fingernail polish is a stinky affair!

If you all haven't heard of Shoo Rayner's Drawing School on YouTube, you really should check him out. He's an interesting fellow and he makes learning fun.
Anyone can learn to draw!
Snakes are one of the lessons Shoo teaches. There are literally hundreds of tutorials for learning to draw a great number of different subjects. 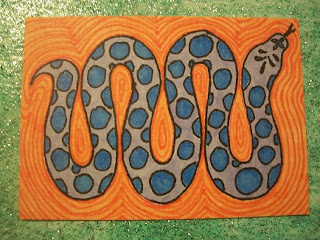 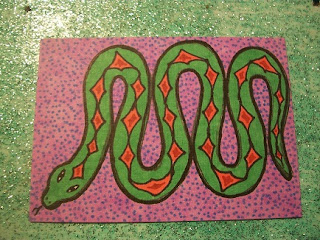 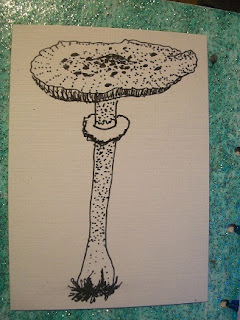 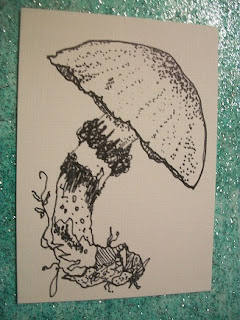 I was surfing earlier and ran across some botanical drawings of mushrooms. I'm rather pleased with my attempts! 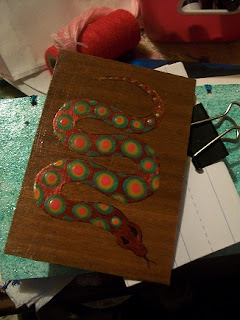 This is the wood book cover I showed you all in the last post. I've painted a snake on it in fingernail polish. I really like the effect the polish gives. It looks almost like enameling on wood. I put a coat of gloss gel medium on the wood before putting the snake on it. I drew the snake freehand in pencil on the wood and then went over the lines with black sharpie.
Fingernail polish is transparent, for the most part, and any lines you put down will show through it. I learned that with the owls on letter openers. If you look close you can see the lines I put there with the black sharpie. Those lines do not show up so well on the snake though.
This little book will be sewn together probably sometime this evening. The page block is handwriting paper. 8 signatures of 5 pages each. The covers are 3x4.5 inches. I'll use embroidery thread to sew it together. I'll remember to not be too heavy-handed with the sewing as to not muck any holes! 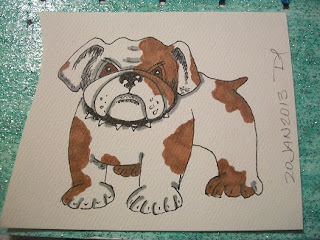 You can learn how to draw a bulldog with Shoo Rayner.
This one is about 3x4 inches on cardstock in markers. I'll cut him out and he'll end up on a book cover or a postcard. I think he may be a bit large to end up on a chunky page. You'll be seeing the bulldog again on a finished project (sometime in the future.) 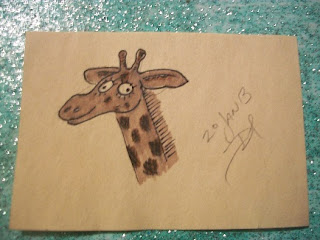 Shoo Rayner will also teach you how to draw a giraffe. My paper wasn't big enough to draw the whole giraffe, but Shoo will teach you that as well. This is a tiny giraffe. The paper he's drawn on is only 2x3 inches. He's done in markers on manila paper. Who knows what will become of him. 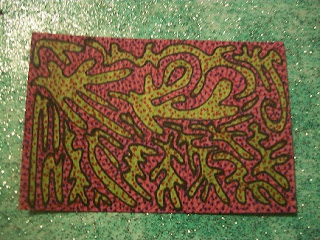 Doodle
This one will end up on a book cover.
markers on manila paper
2x3 inches 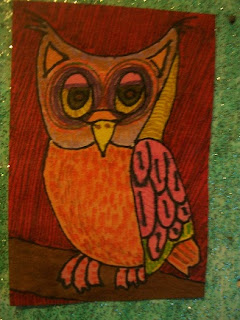 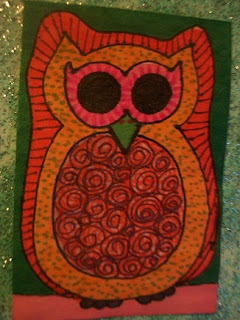 Owls are on the muse's radar this year! We'll see how long they stick around. I rather like drawing owls. 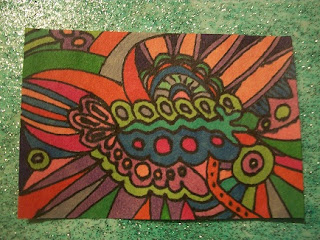 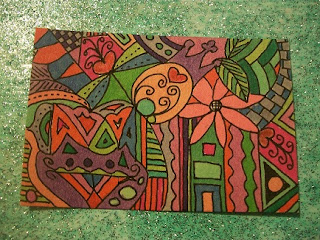 You all have seen these sheep before. And the star garland also. 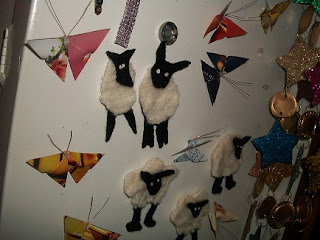 I gave some of the sheep away at Christmas. Everyone loves sheep.
I gave one of the star garlands to my dil, Lue. Other dil, Terah needs one too.
I'm showing off the butterflies though. I really need to put the sheep in the suitcase.
I think you all will see the butterflies again too. I think a stripe of black puffy paint for a body would really bring them into focus! The magnet fragments worked well. 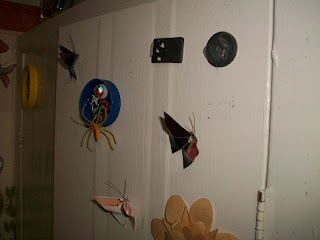 This white metal cabinet the magnets are stuck to is my pantry.
Ma made that blue magnet with the orange spider on it. We need to do another junk magnet making session! 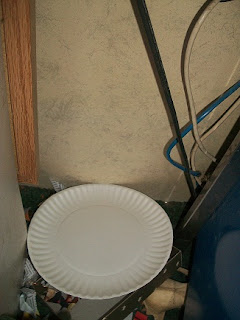 I used up all the magnet fragments I had. I think I ended up with about 15 butterflies with magnets attached.  Tippy cat knocked the paper plate holding the remaining butterflies off the tower yesterday. I need that person to do something with this mess also. I can see them down there on the floor. Yep, there's the proof. But no way I can get down there and pick them up! Not easily.
The day before yesterday, I knocked one of the butterflies off the garland I showed you all in the last post. I wasn't sure what to do with the butterfly garland. Garlands aren't really my thing. I was only walking by the butterflies when I knocked one off. I hung them from the ceiling in my deskroom and I really like what happened. I'll show you a picture in next post. 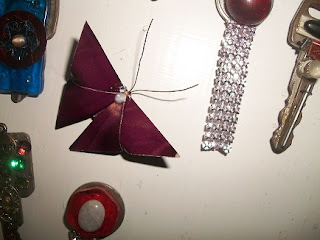 A single butterfly magnet with altered key magnets you all have seen before.
Origami Butterfly Tutorial

Go make some butterflies. They're addicting!!!
Be good to one another!
It matters!
Peace
831