A Bunch of Little Drawings, A Few Baskets and Some Other Stuff 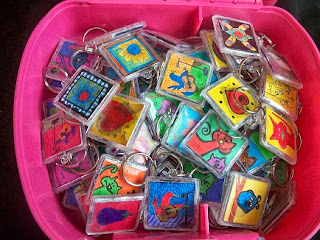 And I intend to draw some more before it's all said and done!
The Dora lunchbox they're in is only about half full and I'd like it to be full as possible by the time I head out to my son's house later this month. I might have to fight with the 4yr old granddaughter Annie to keep my Dora lunchbox but I'll take that chance! That little girl does LOVE Dora! 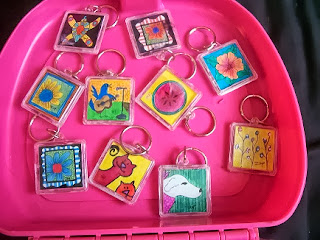 All are done in markers on thin cardstock. The cardstock came in the keyrings...I just turned it over to use the blank side to make the drawings and then put it back in the keyrings when done. I wanted a variety of subjects for my keyrings. 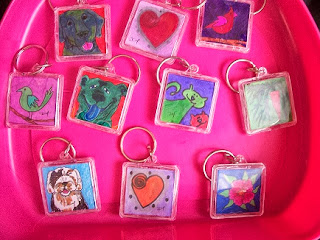 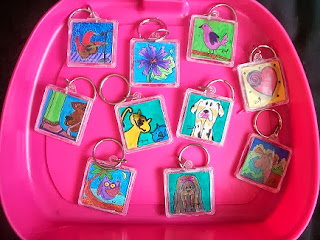 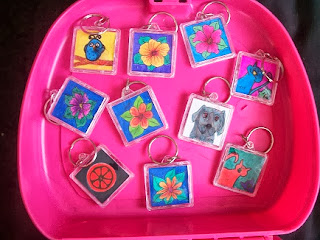 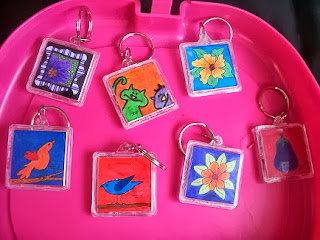 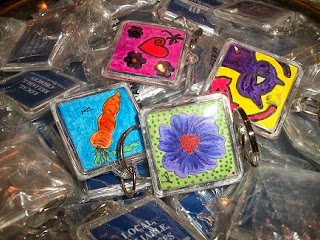 These are the last four I did yesterday. I obviously didn't make much progress on this endeavor yesterday considering I did all the others in two days time. The drawing muse refused to cooperate yesterday. I just did not have my heart in it! 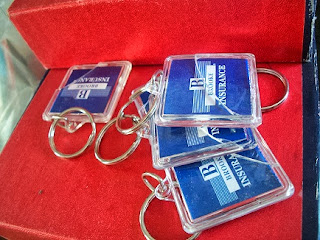 This is what the keyrings look like to begin with. I have to pry the two parts apart to get to the insides. Sometimes it doesn't work out quite right and something breaks in the process. That's the problem with these five. Not to worry though! I have a couple thousand of these things! Been holding onto them since 2008, trying to figure out what the hell to do with them all! I'll keep the metal parts off these broken ones and make other keyrings from some other type of material to go with them.  Ma helped with disassembling the keyrings. 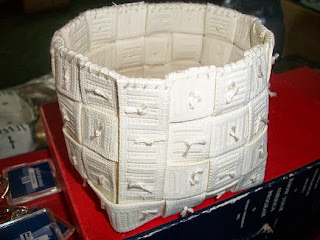 I made another white basket from the 1 inch elastic I have. This one is a bit smaller the previous basket that looks just like this one. That one was 6 inches, this one is 4 inches. And as you can see in the picture, I don't know how to weave all that great sometimes! It works though, so I left it. If I'd of gone back and fixed that one spot, I would have had to taken the whole dang thing apart and that just wasn't in the plans. Yes, I'm lazy on occasion. 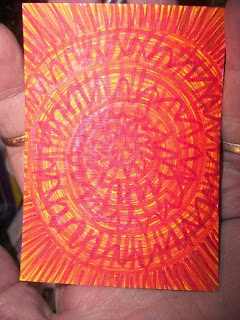 Orange Abstract
ATC
markers on cardstock
I was going to enter this in a contest, but have changed my mind cause it isn't really all that great! If time permits, I'll do another abstract for that contest. I have till the end of the month to get the entry in. 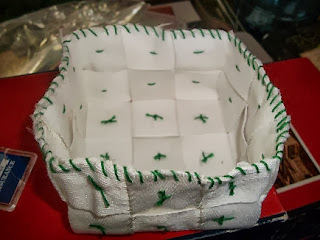 Another little basket. I made this one with some cotton strapping material. It's kinda like seam binding but it is 1 1/4 inch wide. This basket is cute, but it's not a sturdy basket by any stretch of the imagination! It sits up nice and pretty but you can squish it easily in your hand. Don't fill it with heavy things! 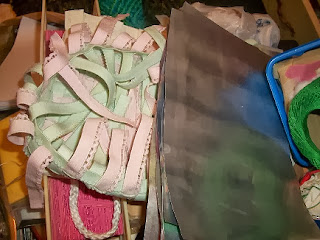 One picture; two projects!
On the left is an elastic basket. I really don't know what else to do with all that elastic! Baskets seem to work alright though. I may do some other kinds of weaving with some of it in the future.

On the right are six aluminum cans I cut down to sheets yesterday. I will play around with it and see if I can make some little embossed metal boxes out of those iced tea cans. You're seeing the inside of the cans, the outsides are colorful as all get out! If little boxes don't work out, these will end up being used on book covers. 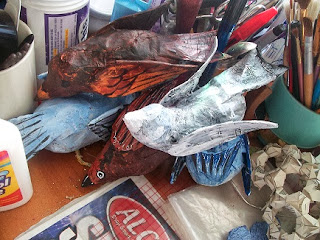 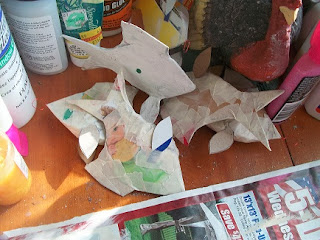 Six paper mache fishes waiting on a layer of paper mache and a paint job. I don't know if these will end up being finished by the time I head to my son's house. I need to make another batch of paper mache clay to finish them. Not sure if I want to drag out the blender and do that. It's a messy job! The kitchen just got cleaned yesterday and I'm really not ready to mess it up royally again so soon! 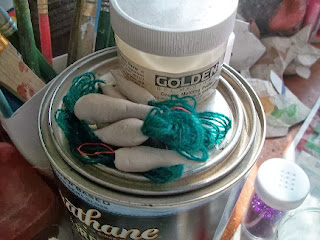 Some polymer clay carrot ornaments. I'm going to cover these with orange glitter after I give them a paint job. 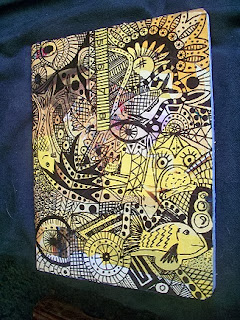 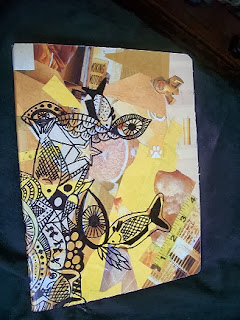 Composition notebook overhaul. I covered a bunch of comp. notebooks in magazine paper (each notebook a different color) and then did zentangles (my version of it anyway) all over the front and part of the back. I figured I'd leave part of it without decoration so whoever buys it can do their own thing to it if the want.
I only did the yellow one this way...but there are about a dozen, probably more than a dozen of them on the shelf in the hallway. 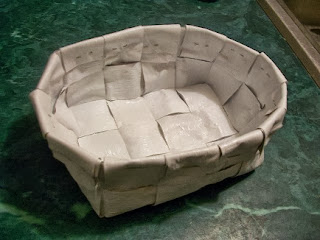 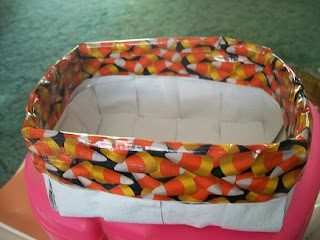 Now it looks like this! I bought a new stapler so I could fix this basket. The new stapler was a fine investment but it didn't really help this basket as I had hoped it would. So I covered up the staples holding the basket together with some candy corn duct tape. This basket was made with some plastic strips that were originally for repairing window blinds. This is a nice sturdy little basket! It is about 7 inches by 5 inches by 3 inches. Thereabouts. I didn't really measure it! 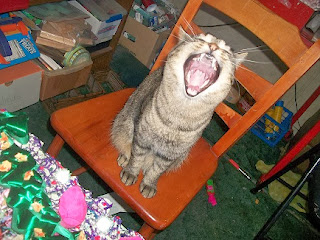 There's Murray showing off her teeth!  I was taking pictures of the fish picture there in front of her and she must of been tired as all get out cause she sat on that chair and yawned about a dozen times! I have no idea why the italics were on! I hit a key on the keyboard wrong and got italics.....weird! 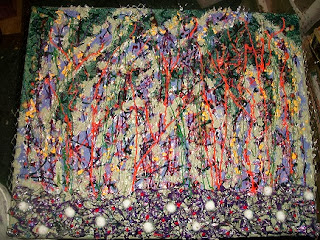 This is what FP9 looked like the last time I showed you all progress on it. 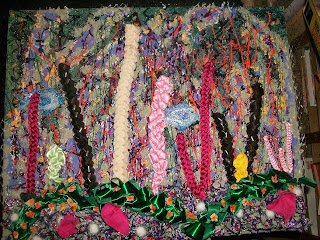 Now it looks like this! It needs a few more fishes and a bit more bling before I can call it done. I have the fishes already made...they're around here somewhere! I just haven't located them yet. I put them somewhere safe so I could find them again when this fp was ready for fishes. You all know that feeling, don't you? Put something somewhere and promptly forget where it is? Happens to me all the damn time and it's frustrating! There are still a few spots to look before I give up and just make some new fishes! It most certainly needs more than 2 fishes!
All the strings on it are ribbon of one sort or another except for the black strings which are 8mm film. All the strings have been braided. The pink blobs along the bottom are silk fabric that I just bunched up and glued in between the styrofoam rocks. There are some little snippets of paper from other components of other fish pictures along the rock shelf also.
Not done yet, so you'll see it again soon. I'd like to have it done before the trip to my son's house. 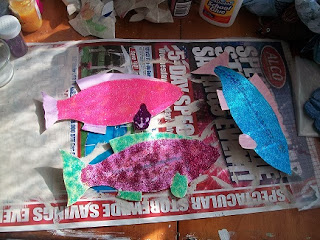 I showed you all these fishes the last post also. Progress has been made! I went with putting glitter on them. Need to get at least one of these guys done in the next few days as I need to send one of them off to Minnesota first of the week. 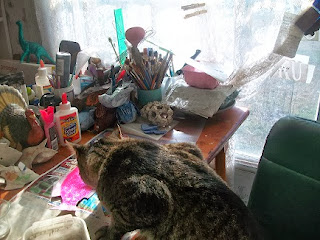 Murray was hanging around all day yesterday. Usually she has little do with me. I refused to let her outside yesterday though so I have no one but myself to blame for the cat being a nuisance yesterday! Tippy and Lola didn't get to go outside either but they didn't seem too upset about it. They slept on my bed all day and gave me the what for while I was trying to sleep last night!
Murray seemed to think those fishes on the kitchen table smelled divine!

And that is all I have for today!
There will be more probably tomorrow or the next day. I have a lot of things to accomplish by the 30th!
Remember.....
be good to one another!
It matters!

Thanks for stopping by!
Have a wonderful day!
Peace
831

Cute all of it- love the baskets, and the zendoodles and the fishies- man oh man I love it all. Have fun that's all that counts!