Not much to show for the time passed since the last post but here goes: 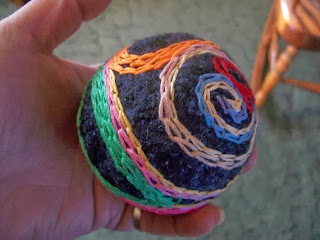 Rattle Balls
I dragged out the bottle caps, the metal bits, the scotch tape, some plastic grocery bags and my needle and thread and made 9 balls a few days ago. Each day I've sewn covers onto those 9 balls and have already finished embroidering 5 of those nine balls. Gonna need some more embroidery thread if the muse insists on making these useless things. They are fun to make though! I have another 4 balls to embroidery. No pictures have been taken of these balls yet. The one above was made sometime last month. I took it to my sister's house on Thanksgiving and did the embroidery on it.

I've been cutting promotional photographs into one inch strips and proceeding to weave birds from them. 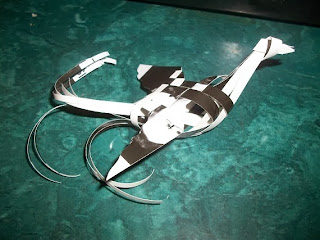 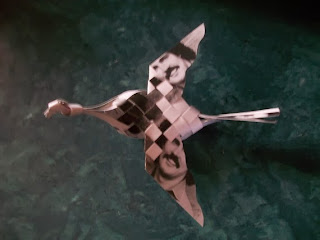 Was my mother that decided the genders of the birds! Whatever. 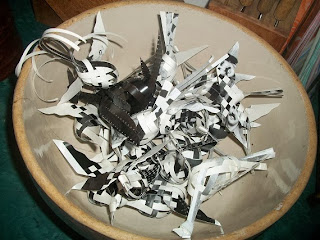 The dark colored bird in the bowl is the one made from 16mm film.
My stone bowl is about 14 inches across and 6 or 7 inches deep. 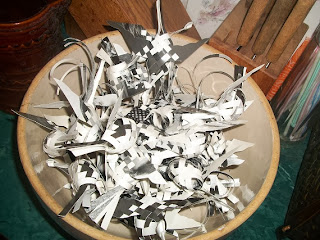 It has a few more birds in it now than it did when this picture was taken. I do not know how many are in the bowl. Somewhere around 30 of them. 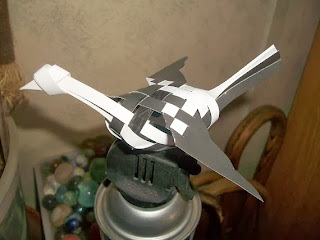 They will all get a copper wire hanger eventually. Eventually will come quite soon actually as I am giving these to people for Christmas this year. 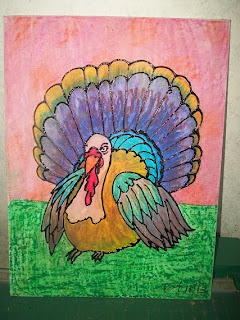 Here's that turkey painting I talked about first way back in August. I told Evelyn she would have it by Thanksgiving. It was done by then but she got it the day after. Painting was what she requested but the painting muse has been on vacation and I was down to the wire to deliver by the time I said I would, so I used oil pastels instead. Evelyn was pleased so all is well. 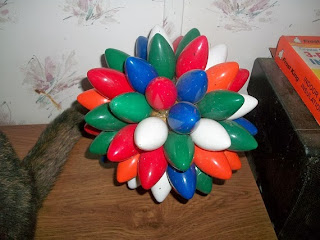 I made another light bulb orb. This one will get a coat of either silver or gold spray paint.

That's it for me!
Thanks for stopping by!!!

Remember....
be good to one another!
it matters