A Late Holiday Greeting, some art and a few critters

A late Merry Christmas to you all. I hope it was a great day for you and you remembered the reason for the season. 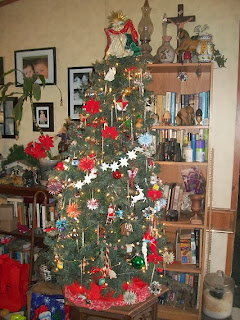 I'm still waiting on the gift exchanges to cease. Sometime in the next week all the children will be here to get their presents. Then I can take the tree down and pack away the Nativity for another year.

If not for the Altered Envie Group I belong to, I probably wouldn't have gotten a drawing done in December. 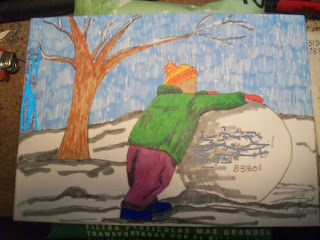 I think this got sent somewhere around the 15th? I really don't remember what day I sent it. It's the first drawing done this month though. The little boy with the giant snowball is on the front of the envelope. 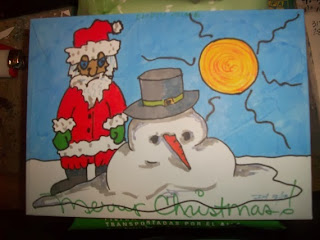 And Santa (after a HARD Christmas night) with a melting snowman on the backside of the envelope. All done in markers. 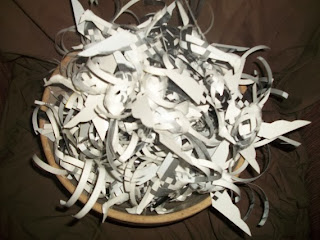 I have no clue just how many of these birds I ended up making. Somewhere around 60 of them. I gave a bunch of them away for gifts this year.
This big crock bowl full of paper birds lead to more birds.... 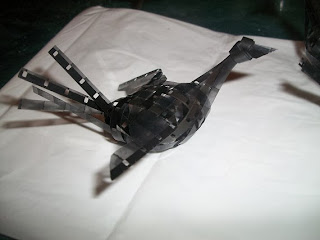 This time made from 16mm film. 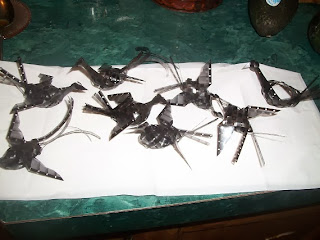 These birds are burned into my brain. I will NEVER forget how to make them, as I have made a lot of them! The film birds are smaller than the paper ones. I still like the straight tailed birds better than the curly tail ones but others pretty much demand that those birds NEED curly tails so every once in a while I make a curly tail just to keep the peace.

I'm thinking I need to string these little birds on a garland. We shall see if that materializes in the new year.

I have reels and reels of 16mm and 8mm film. All are football games from the 1970s. The one I used for the birds and the basket below is from 1972. 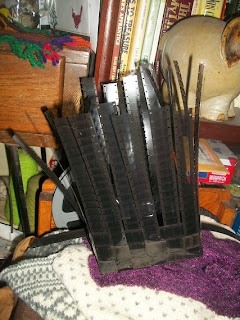 As I said, I have reels and reels of this film and I need to make something out of it. I tried to weave 8mm film but it didn't hold up well to the bending of the corners. Bend it any amount and it snaps in two! The 16mm film worked great with the bending. It's not a very sturdy basket though. Floppy. I'm uncertain how I will finish off the top edge. I had hoped to not use any more tape on it than I have already used but that may be the way I have to go with it. This is a Work In Progress. 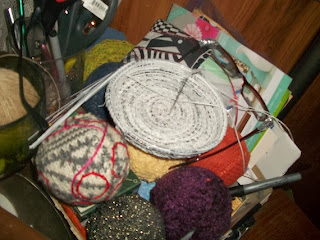 I'm still working on the broom bristle coiled basket. This picture was taken three days ago. 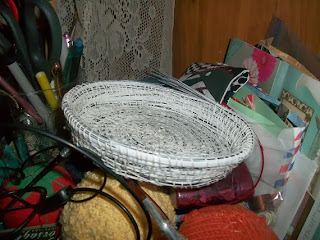 This one was taken yesterday. I've added two coils in three days. It's coming along though. 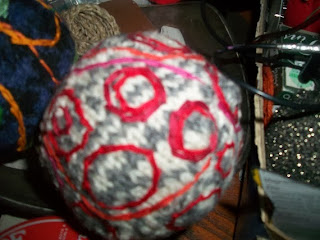 I'm slowly getting all the wool balls embroidered. I don't think this one is actually done even though the last time I laid it down I said it was done. It needs a few more colors added to it, I think. 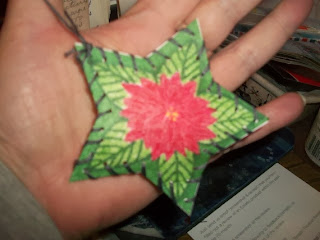 While playing around with the fabric for the stars below, I got tired of scoring all those lines and decided to see what would happen if I sewed two star shapes together after doing some marker drawing on the stars. It works, but it isn't anything special if you ask me. 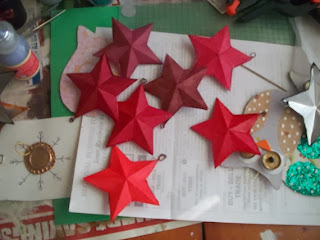 Apparently there are nine of these since the last post where you saw, I think, 7 of them. 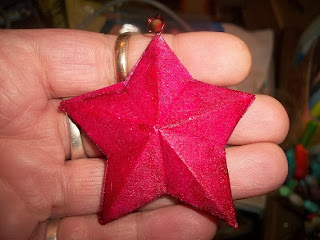 These are really easy to make and scoring those lines really isn't hard to do. 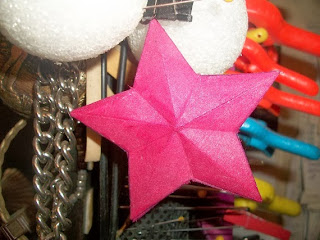 All are made from a mystery fabric I got at a yard sale. The fabric is on a roll like wallpaper...it's about the same size as a standard roll of wallpaper. I don't think it is wallpaper though. It really doesn't matter what it was made for originally nor what the heck it's made from. I won't be using it as it was intended anyway! 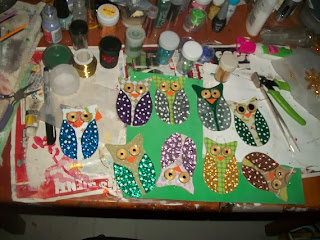 And I made nine more owls like the ones in the last post. I'll not bore you with an individual picture of each of them. 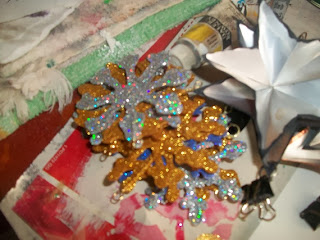 I made another dozen of these glittered glue snowflakes. This pile of snowflakes is the first batch made. The second dozen aren't done yet. I still need to peel them off the wax paper, add a hanger and glitter the backsides. 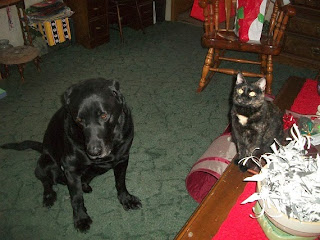 Fred and his kitties are all doing fine. Here's Tippy sitting on the coffee table in the living room staring at the Christmas Tree and Fred wondering why he likes kitties so well. 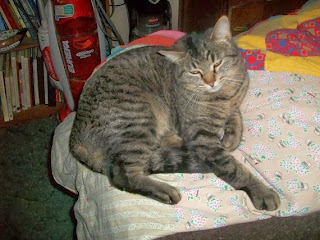 Murray asleep on the foot of my bed. Her favorite sleeping spot. 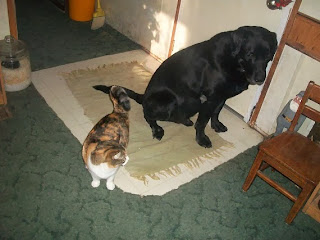 Fred and Lola hanging out by the front door. 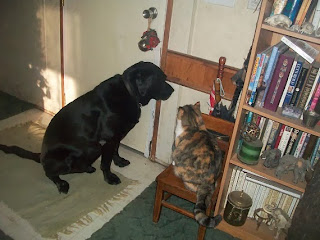 They both want to go outside.

Thanks for stopping by and reading my ramblings!
I hope the new year holds many blessings and good love coming at you each day!
Remember....
be good to one another!
It truly matters!
Peace
831