Some Trees, Some Bugs and Sunset

Hello Readers!
I don't have much art to show since the last post. The muse is fleeting these days for some reason. She insists on sewing instead of drawing or painting. And she insists on doing absolutely nothing creative some days.
Today was not a creative day. The day isn't over yet and I may actually get that baking soda clay bowl on the kitchen table done this evening. It just needs one more color of paint, a half hour of drying time and a coat of sealer.

Right now I'm going to ramble on about trees, grasshopper sex and some other things to do with nature!
A little background.....If memory serves me correctly those trees have been growing now for five years, maybe six. One hundred and forty seven little evergreen trees were planted by my 2 sons and their wives on a Saturday probably in May or June. Took most of the day for the four of them to get it done.
There were 150 of them but for an unknown (by me) reason only 147 of them got in the ground.
It has been ages since I took a walk to inspect those trees. Some of them are taller than I am! A few only come about waist high to me and one of them is a short little bugger that really looks like it might of been a volunteer that just happened to occupy a bare spot dead in line with the others. It's a tiny little thing compared to all the others! It only reaches about knee height to me. 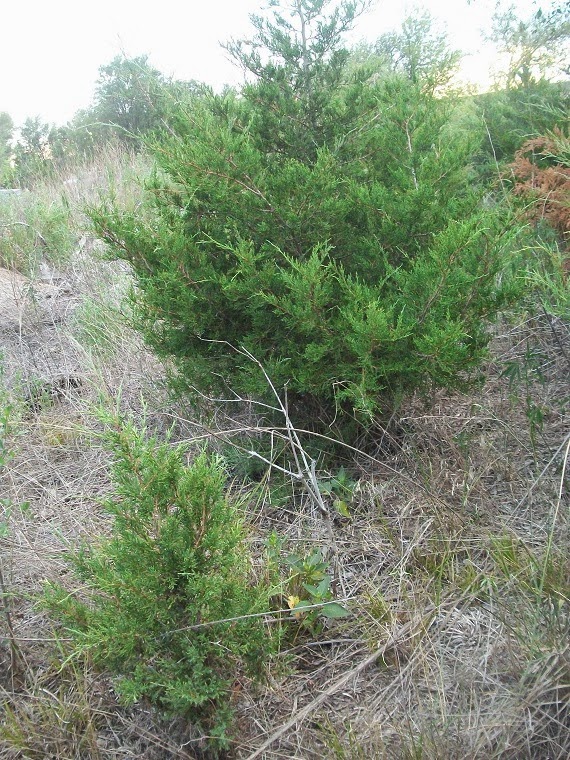 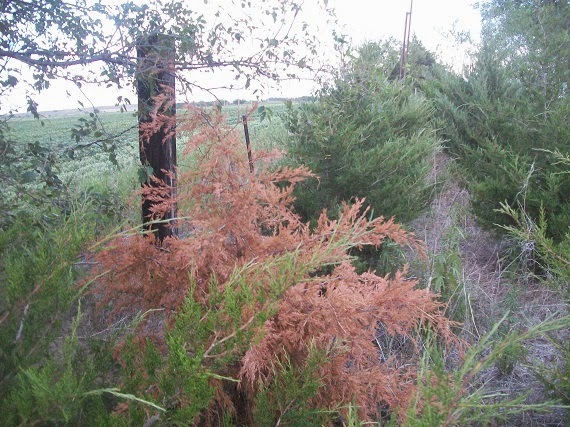 I found only one tree that was dead. 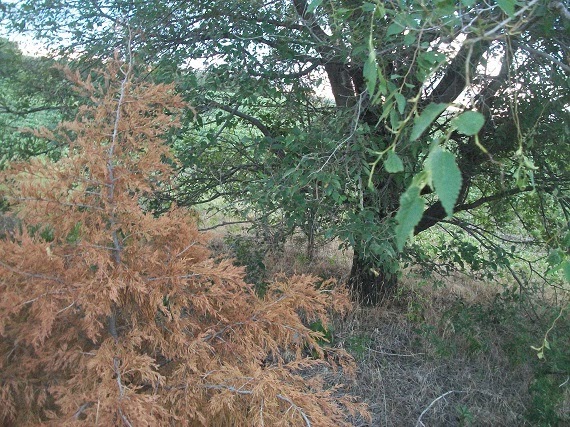 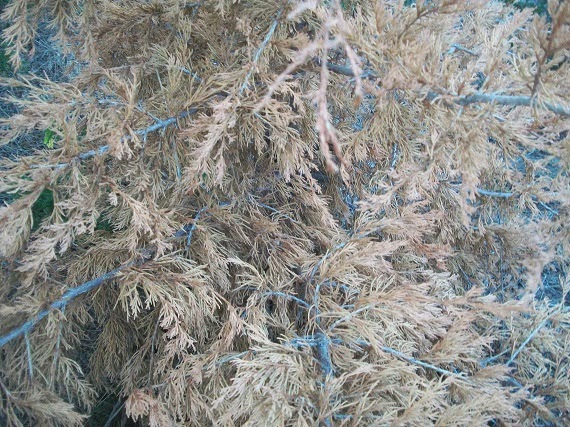 The title to this picture is:

The color on my monitor is all off! This tree is more red than tan. It's a gorgeous color but my photographs do not do it justice. I suspect someone should go out there and cut that tree down. It's a fire hazard. That little tree would explode into flames if it were to be struck by lightning!
It's far enough away from the house it wouldn't be a danger but the other trees around it would be fried too if it caught on fire. I think the elm tree it was planted under is what killed it. Not enough sunshine on it. 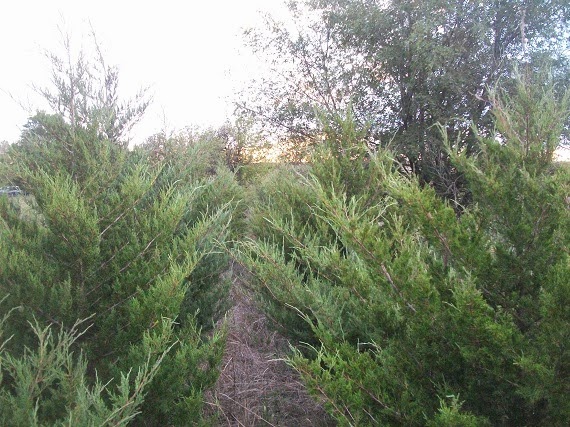 I'm sure after walking the length of these trees I will have to check for ticks! Next year those trees will be too big to walk between. It would be cool to cut a tunnel out of the middle of the two rows! No one would know you were in there!
Most of these trees are just a few inches taller than I am. None over six feet tall. I'm about 5 ft 7 in. 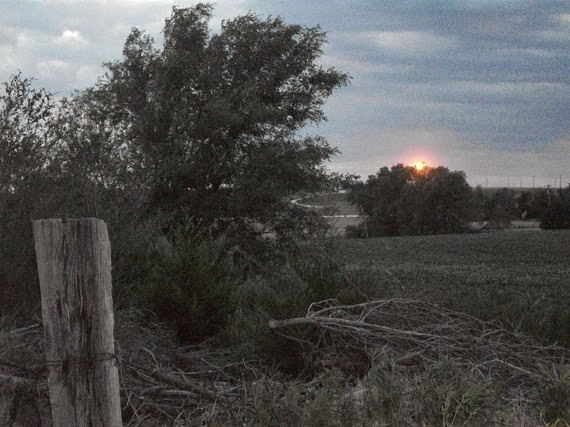 Along the front boundary of these trees is a trench filled with debris from years of people discarding things there. The trench used to be where the sewer system was years and years ago. You cannot get to the trees from the other side of the trench so you have to go on the other side of the fence facing the field to the north of the trees. There's always been a break in the fence. I've known this property for about 20 years and the fence has always been open like that. Sometimes the man who owns the field will put cattle on it but when that happens he erects an electric fence couple yards north of the wire fence to keep the cows in.
This picture is looking west as the sun is fixing to set. It was around 8:30pm when I took these pictures. 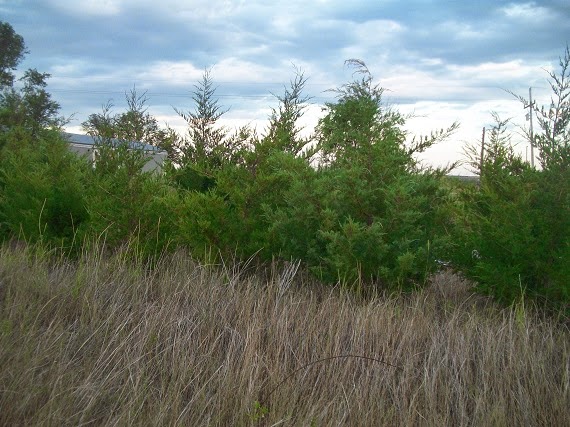 Looking south at the evergreen row. 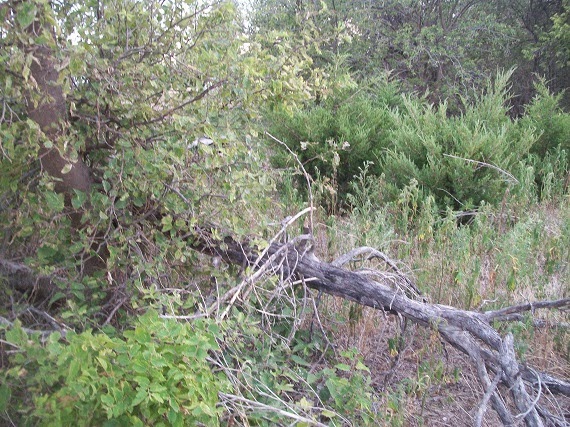 I told you all about the storm in the middle of June. Showed you all the pictures of the downed trees in the yard. I hadn't taken a walk to see if any of the trees in the tree line had been damaged. This one is as dead as it can be but I don't remember it being there the last time I did take a walk out in the North Forty. Most of the trees looked pretty good out there. It's quite thick in the over growth back there which probably helped some. 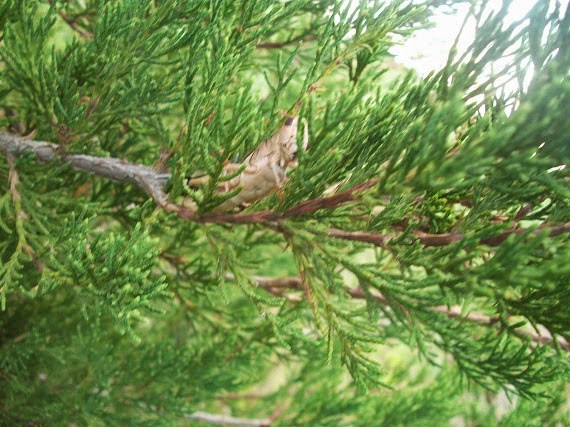 I'm glad grasshoppers do not eat evergreen trees. Those damn pests are every-freaking-where! 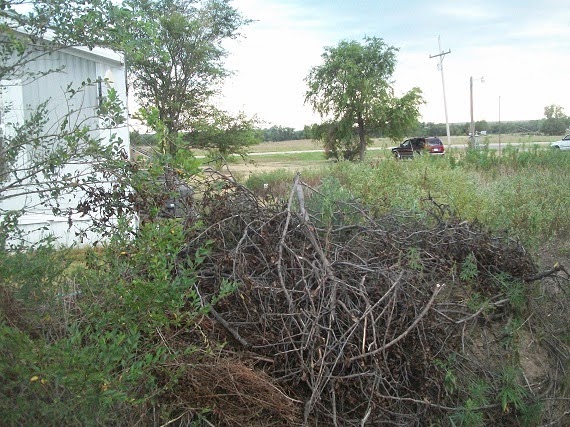 Beings the evergreens are planted along that trench, whenever we get storm damage to the trees, the debris goes in the trench. These are all the branches from the pear trees and the plum bushes. 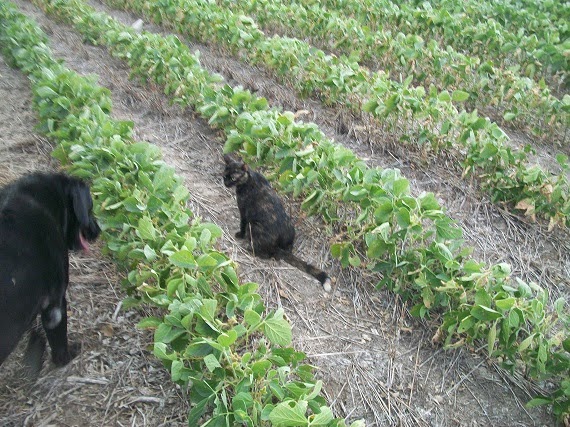 I had tag-alongs who don't realize they shouldn't be tramping around in the soybean field! That is Fred dog and Tippy cat.Fred was worn out by the time we got to end of the row of evergreens at the pear and apple tree behind my sister's house. (She just lives next door.) There's no telling that dog a long walk wouldn't be good for him. He had to tag along anyway. He's moving a bit slow this evening after that long walk. 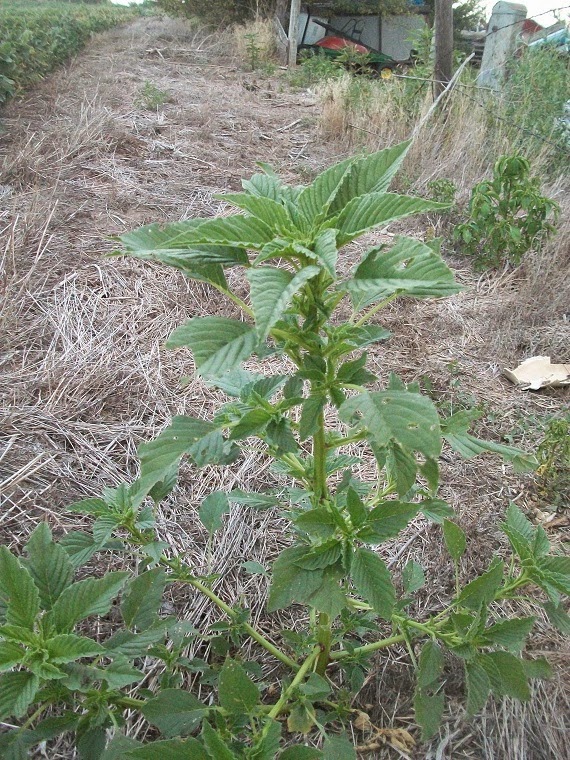 I think this is pigweed. I took the picture to make an identification. I have yet to do that. 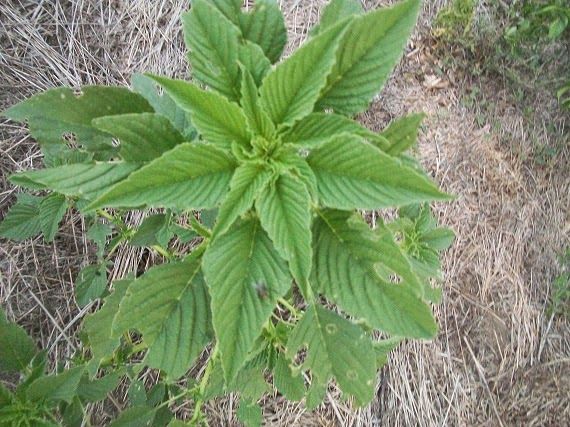 Same plant as above. 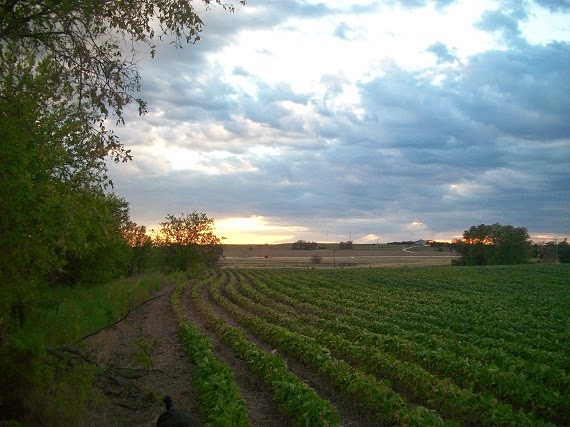 I wish those clouds were bearing some rain. We could use it!

I walked all over the yard after I took a stroll to inspect the evergreen trees. I found these grasshoppers doing their thing on the bamboo stand along the patio out back of the burned house.  I probably took 20 pictures of these two. They acted as though they didn't even know I was there till I reached down to hold the stem still when a whiff of breeze came along. And then the bottom one just moved around to the back of the stem. Guess they don't mind being on display! Exhibitionists! I once knew a man who was an exhibitionist. He was so much fun! Fearless! Who'd of thunk that grasshoppers doing 'it' would bring back such pleasant memories?
Ah, the wonders of nature! 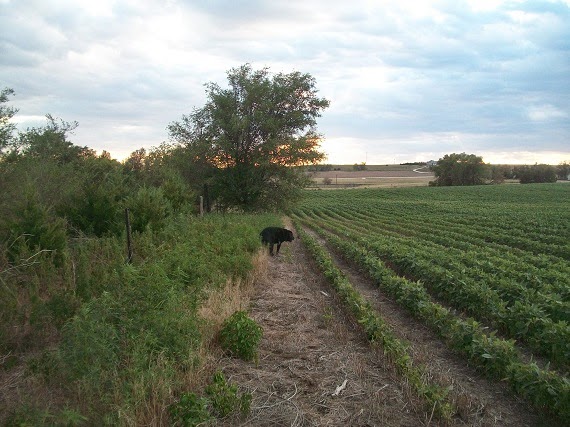 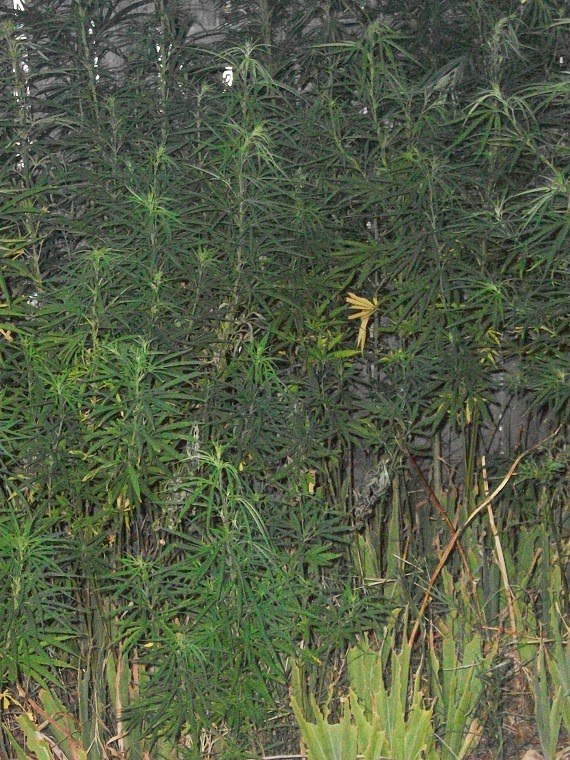 This is the weed crop in what used to be known as the patio flower bed. Weed has taken over! That's marijuana in case you don't know what weed is. As you can see they've taken over the iris bed and grasshoppers have eaten most of the irises. The irises still bloom every year so I know the weed hasn't chocked them out completely. Why, you ask, do I have marijuana growing in my flower beds? Well, the answer to that is because that's where it decided to grow and I really don't have the energy, not the inclination to get rid of it! Could the cops come and say "You can't have that there!"? Yep, I suppose they could. Am I worried they will? Nope. It's been growing all over my property for years! Can you smoke it? I suppose you could, but I would't advise it...it's just ditchweed. It voluntarily comes up where the hell it wants to. It's a nice filler! Pretty green and quite large, some of the plants. 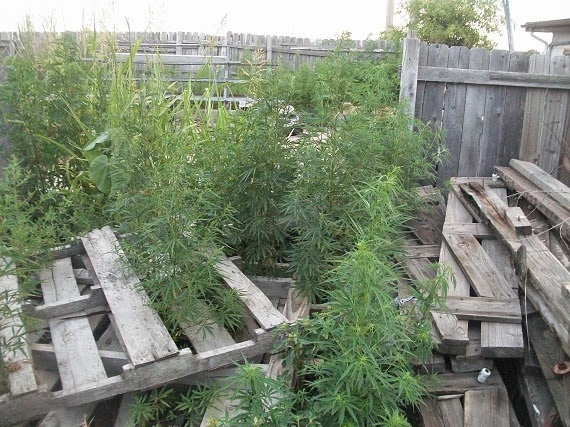 The wooden fence at the background of this picture is where the weed in the previous picture grows. And look! There's an even nicer stand of it on this side of the patio, growing among a pile of pallets that got scattered by the wind. 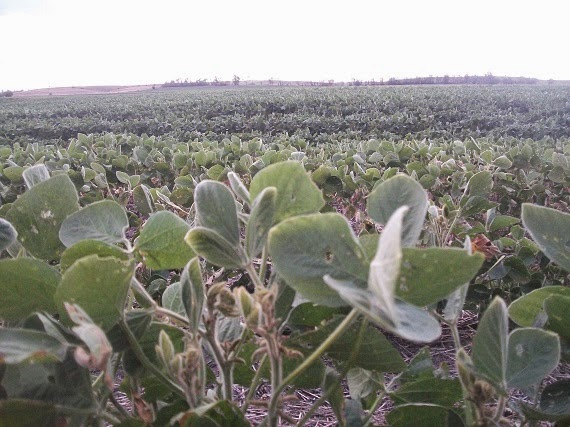 In the post before the last one I showed you all the field north of the house. I showed you two pictures of it, four days apart. I said I didn't know for sure just what was growing in the field but I thought it was soybeans. It is soybeans. Already has the beginnings of little soybeans forming. 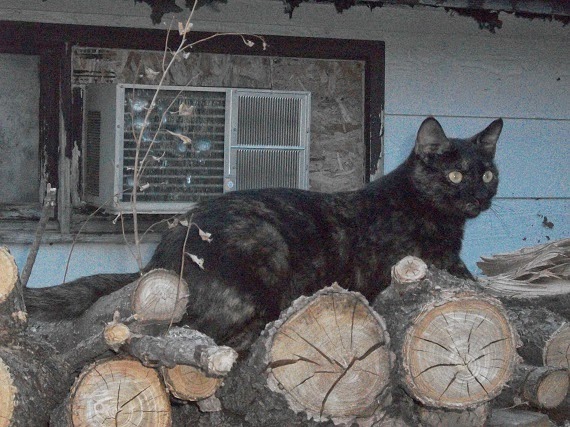 Tippy cat followed me all over the yard and out into the trees. Here she is behind the burnt house, on the patio, on a stack of firewood. A lot of this firewood came out of the front yard when the storm did all that damage to my beloved trees. Least the wood won't go to waste....not all of it anyway. 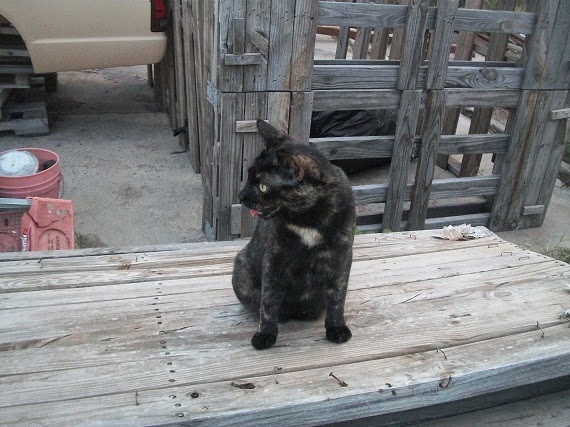 Here's Tip panting after that long trek from the trees. 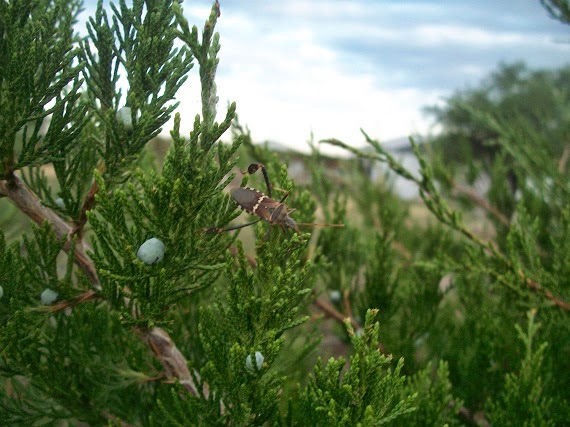 This one got outta whack and I don't know how to fix it so it'll just have to be out of whack. This a really cool bug I found on one of the evergreen trees. This is an assassin bug so I know he's not eating my evergreen trees. He's quite a handsome fella! Stank to high heaven though! Assassin bugs are like stink bugs. Same family of species. 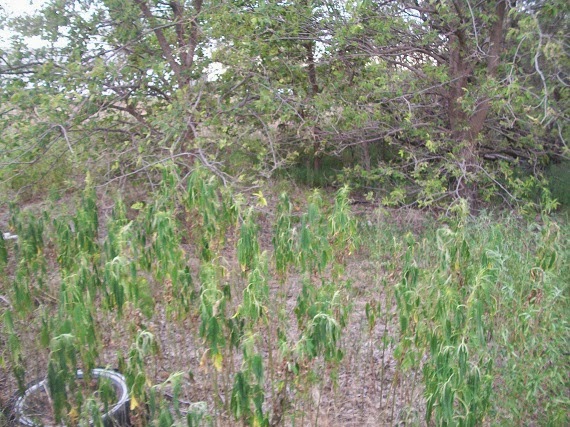 A sorry looking stand of marijuana out in the evergreen row. I think this weed looks like this because of the herbicide used on the soybean field. I can't think of any other reason this stand would look like this when the stands on the patio and elsewhere on the property, looks great! I know you can't see a single evergreen in that picture, but trust me....this is out in the row. The trees in the background are a stand of about a dozen trees of various kinds and heights. The evergreens stop just before this clearing and continue on the other side of this stand of trees. I did not go past these trees. 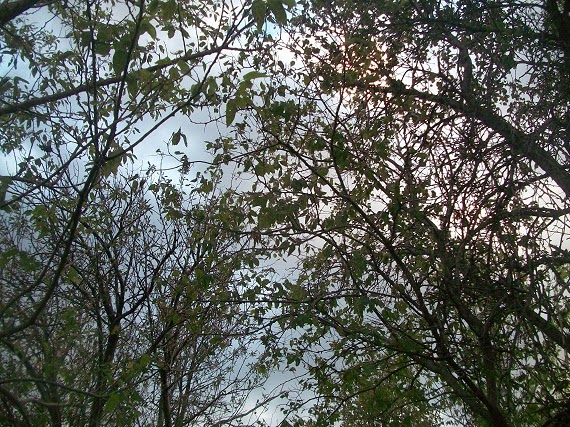 I was getting tired and it was time to head back to the house. This picture is looking up through that stand of trees to the sky. The tree on the left is a pear tree and the one on the right is an apple tree. Neither have any fruit on them to speak of! That storm in the middle of June did a number on the pear trees in the yard so it doesn't surprise me that these trees are in a similar state with the fruit crop. I didn't have my glasses on so I couldn't see way up in the canopy. I did see a few apples on the tree, but not near a many as there should have been. I saw zero pears in that tree. 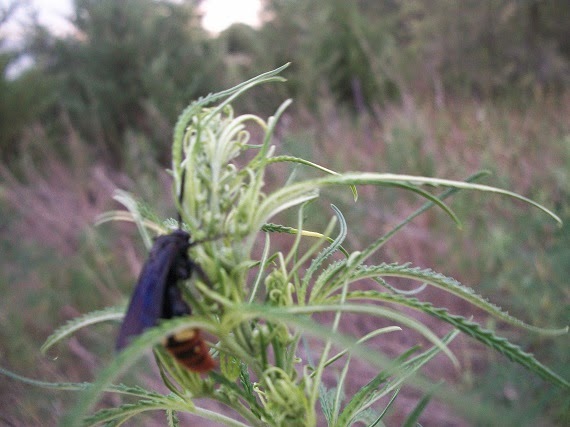 Coming back to the house, I came upon this beautiful wasp pollinating a marijuana plant. He didn't mind my meddling anymore than the naughty grasshoppers did! Never seen a wasp that looks like this one. Will have to see if I can identify it. 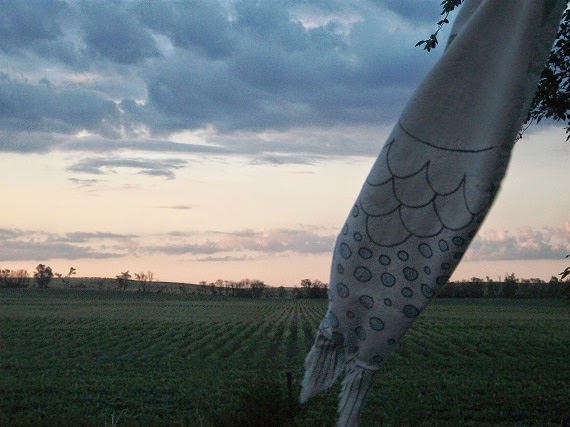 Looking north off the front porch at the soybean field. There was a bit of a breeze. I really wish it would rain.

The sun was getting low in the sky and it was time to call it a day for walking outside.
I absolutely LOVE my little chunk of paradise!

thanks for hanging on till the end!
Remember....
be good to one another!
It truly does matter!
Peace
831