We are going to look at clouds to start this blog post off. We had a pretty good storm in my neck of the woods on 21 August. That would have been last Thursday.
I got some good video of the storm in progress. It's mostly black except when it lightnings. We lost electricity for a couple hours. 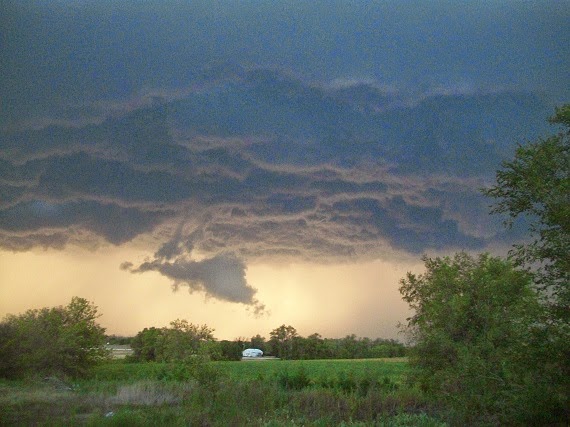 This is looking to the NW out my back door. 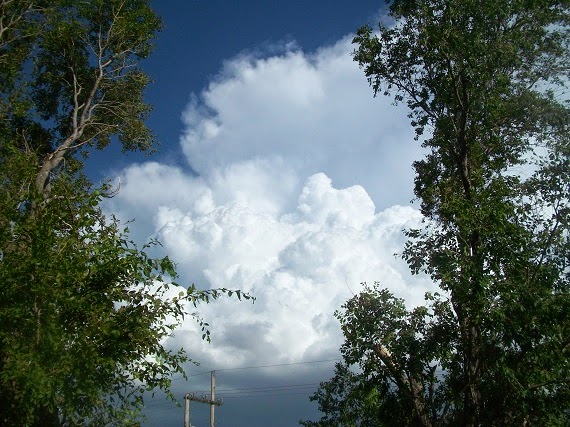 These pictures are not in any particular order because the smart card refuses to save my pictures in chronological order if I shut the camera off between picture taking sessions. So you all will just have to deal with it cause my old brain doesn't exactly remember the sequence at this point in time.
The pretty white clouds showed up first though. 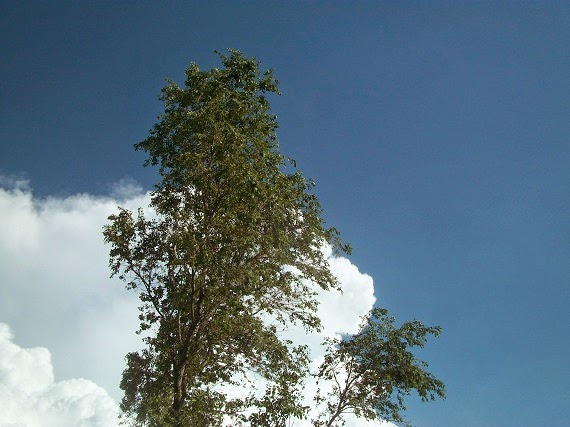 These big thunderheads were beautiful! 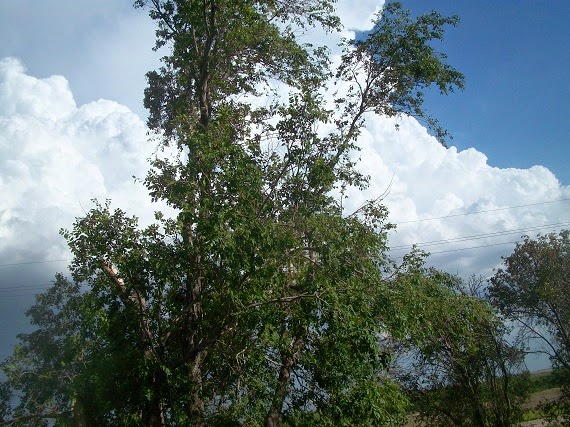 And they grew like nobody's business!
The previous three pictures were taken standing on the front porch. 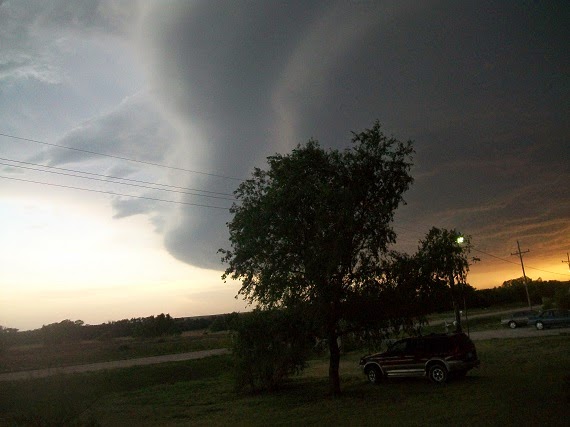 This is looking out the backdoor to the west.
The 'mothership' had arrived. 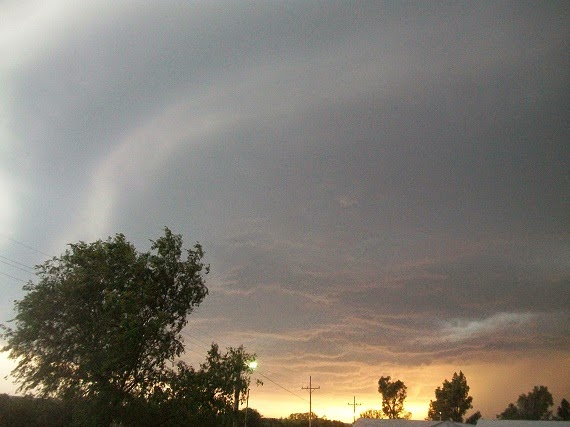 This thing dropped a small tornado a few miles to the north. It touched down in the middle of a field and did no damage. My nephew got a video of that tornado. Sorry, I don't know how to embed a video. 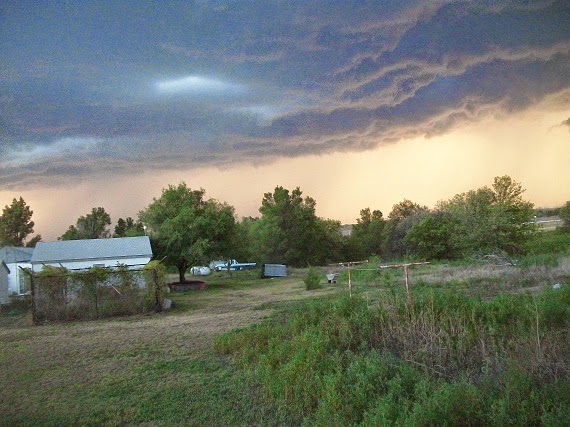 I love how, when it's fixing to rain, everything looks so green. 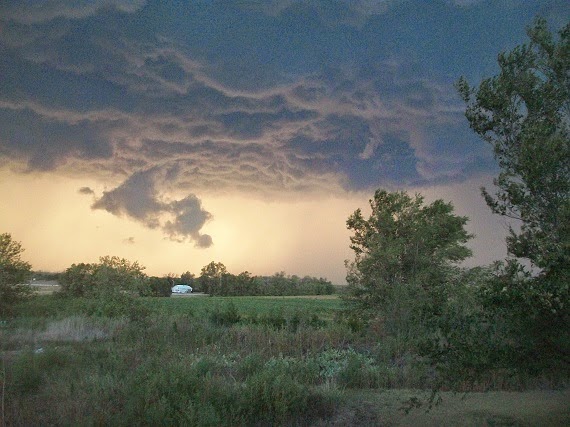 These clouds looked very angry and it got cold really fast. 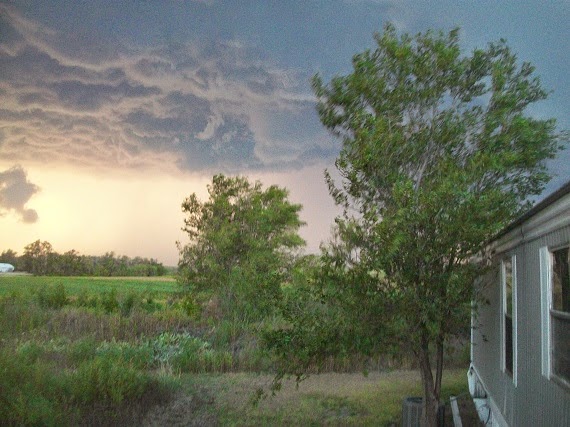 This is pretty much looking due north out the back door. 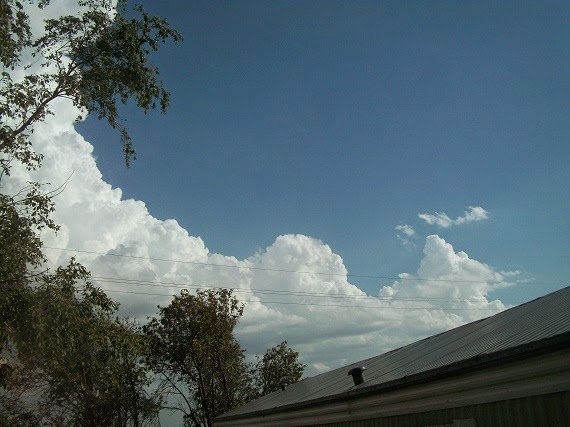 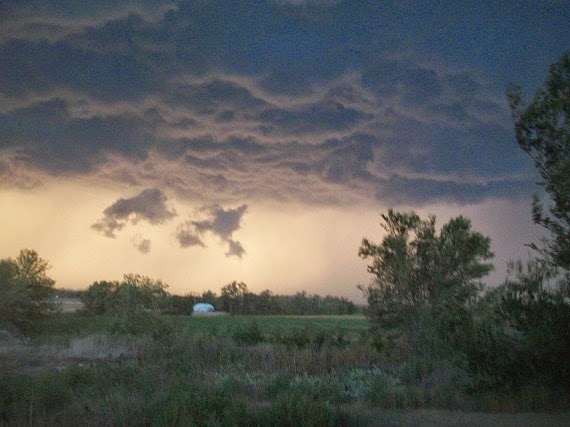 I was glad to see that cloud hanging low break up when it did, instead of growing bigger! 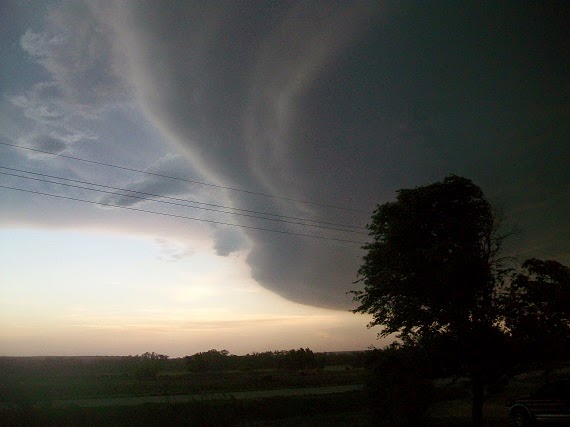 This big cloud on the edge of the thunderstorm was really pretty. And it did remind me of an alien spaceship! 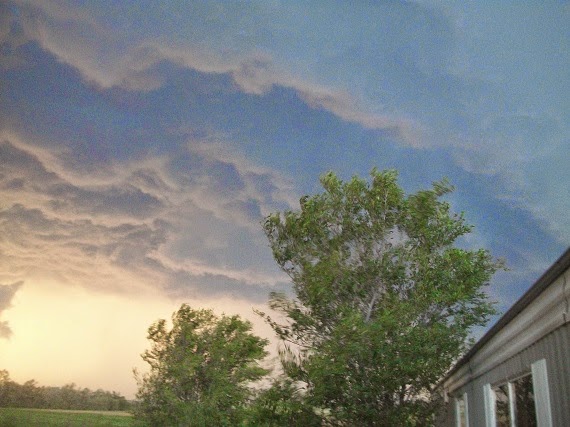 The wind blew a lot. It rained an inch or so. Nothing major except no electricity at the end of the day. This storm started around 8:30 or so and the electricity went out about 9 or so. It was our for a few hours.

I have done some art since I was here last. Not a lot of art, but I've not been totally idle. 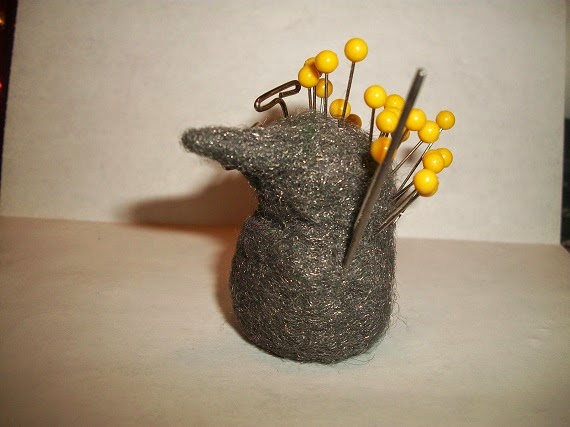 I told you all about this little guy the last time I was here, I do believe. He's made out of steel wool. I needle felted the little bird. He is stuck to a magnet on a steel tray on the shelf beside my computer.
It isn't hard to needle felt steel wool. You can buy a package of steel wool at the hardware store for about $3 and end up with more steel wool than you will ever needle felt.
I found that felting steel wool makes you itch! And one really should wear a pair of goggles while doing so. Not cause the steel wool flies everywhere, but so you don't go rubbing your eyes while felting. I made a starfish out of steel wool too. Wonder where I put that thing?
There was a break of about a week between the two projects. This is the postcard I sent to Trinidad and Tobago to August partner over at AFA in the Envie Addicts group.
There are two more postcards waiting to be finished still. You all saw them in the last post. They don't look much different now than they did then. This is done in acrylics, pearl watercolor and marker on matboard. 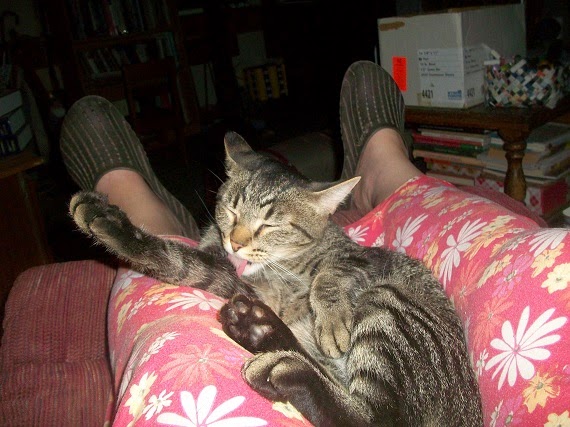 Murray taking a bath in my lap the night the lights went out. I sat in my recliner, shining the flashlight around the room, taking pictures with that stupid camera. I've retired that stupid camera! I got a new phone that takes MUCH better pictures! The damn thing is smarter than I am but I'll figure it out eventually. My son decided I needed to come out of the dark ages of electronics into the now.

I played in the Treasure Hunt a thon over at AFA last weekend. I made a few fishes. 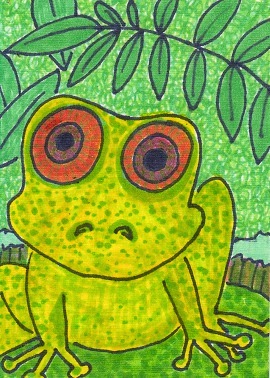 I made an ATC that went to live in Michigan.

Another fish from the athon. 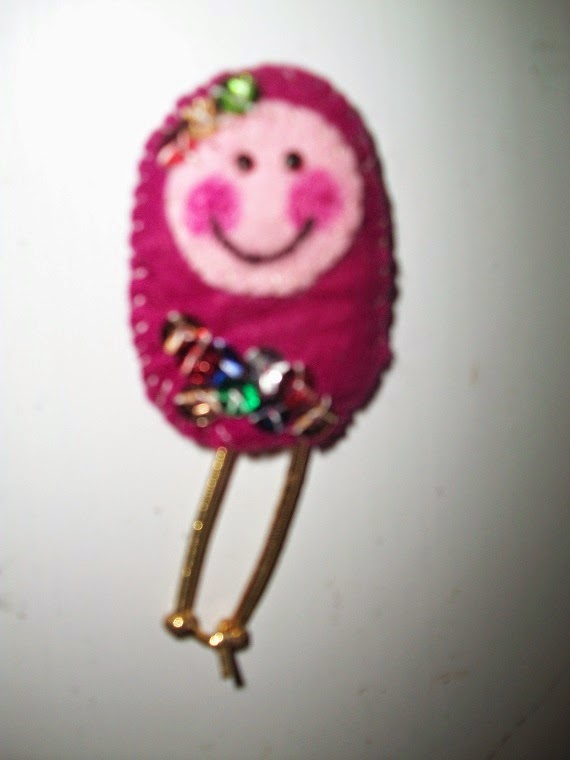 Someone in the Envie Addicts group posted a tutorial on how to make little dolls out of aluminum pull tabs. I made this little dottee doll magnet over the weekend using a large pull tab from a can of chili. She's about an inch and half long minus her legs. She's made from felt sewn over the pull tab and gold elastic for her legs. She also has seqins sewn on her. Her facial features are drawn on with a sharpie. Her eyes are two tiny seed beads. 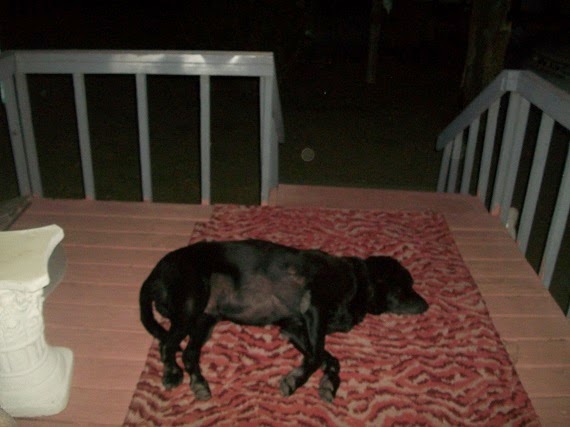 Poor old Fred has had a hard week! And he doesn't have sense enough to come in out of the rain either! He fell twice the other day. Those back legs of his are giving him some trouble some days. He's had trouble with the stairs today but didn't fall.
This afternoon he wanted to play ball so I threw the ball four or five times for him. Used to be he'd play ball for hours! Not so much these days. He was none too happy I wouldn't let him get in the van this afternoon when I opened the back hatch to get something out of there. He thought we were going for a ride. He's not been for a ride since the episode at the state lake a couple months ago when couldn't walk for two days. He's getting to be an old critter and I'm none too happy about it. I will miss this old dog one day. At the moment he's on the porch all laid out just like he is in that picture.

That alien cloud pic is crazy...I haven't experienced the type of weather that you have out there...I woulda paniked! Murray cat and Fred dog...so adorable. Pull tab doll...you did it! I'm a sucker for fishies....yours are crazeballs!