It's been about six days since I was here last. I really don't have much to show for six days being gone! I've been asleep mostly for the last three days. Not to worry! It happens sometimes that the sleep monster shows up and stays for a bit. I've had sleep issues for the last 14 years, so this is not really anything new. Everyone needs to sleep 18 hours a day every now and then, yeah?

At any rate, all is well with me, more or less. The old body went into rebel mode but the sleep monster helped out greatly in that aspect. I didn't, however get much accomplished in progress on my many projects. I really wish I could create while I sleep! 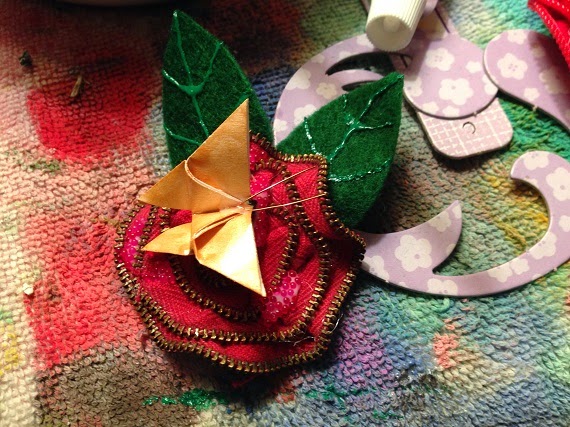 I still have zippers scattered all over my work table in the kitchen. No more roses have been made, but butterflies have been added to 14 of the roses you all have already seen! I ordered some more magnets earlier today. Even though I have tons of magnetic clips I could steal the magnets from, those magnets are a bit strong for a zipper rose! I found a place to buy magnets for 20 cents a piece that are perfect for zipper rose magnets.
I have plans to attack those zippers again in the near future and produce some more junk owls and I might try another felted piece with zippers as well. 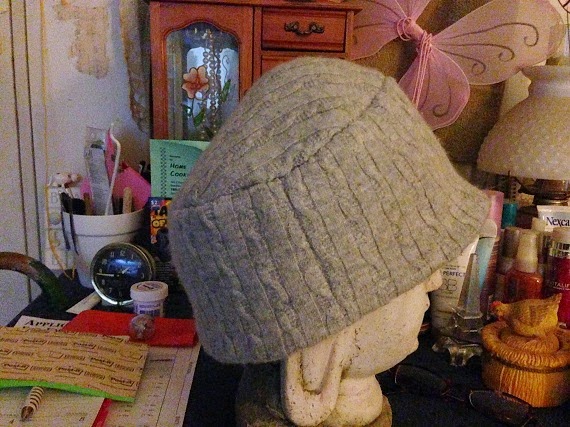 I made a nice conservative gray cashmere sweater hat. It doesn't really have a bump on the top of it. That's Buddha's head the hat is on and Buddha has a knot of hair on top of his head. I had to go to my sister's house and borrow Buddha for the photo shoot. I really thought I had a styrofoam wig head somewhere around here. I looked out in the burnt house. I looked in the cutting room, in the deskroom and every other room in this house and I didn't find one! I'm certain I have one somewhere though. The burnt house is full of stuff and one can't find anything out there! Other's have decided it is their storage shed. They ask. I say sure! Every time I go out there, there is something new I've never seen before!

I was sitting here minding my own business a few nights ago when the phone rang. 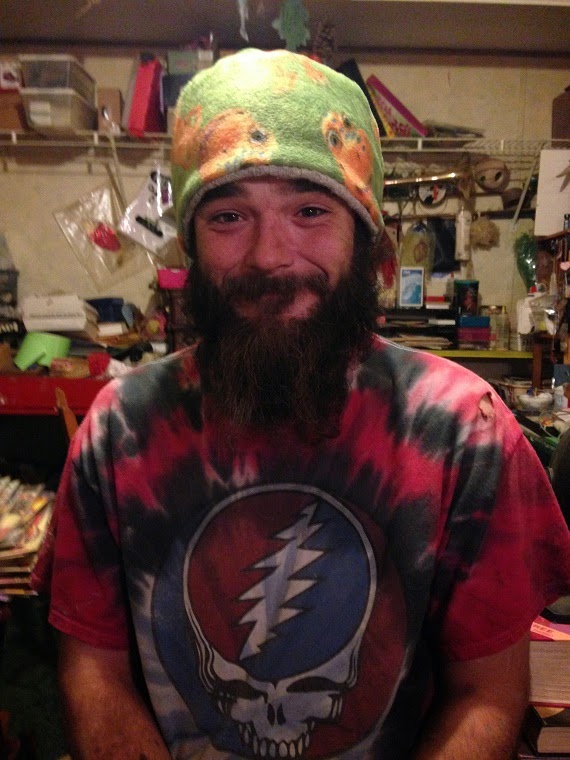 It was this guy! That nice conservative gray hat became his. He liked the lining of the hat better than the cashmere side. Dinosaurs from some movie on fleece suit my youngest son much better than conservative gray does! Nothing mild about this boy! He's always been the wild child. His brother is the mild mannered child. Ronnie would never be caught dead in that hat!
I had never sewn a hat before. Rich thought it was a really cool hat and he was sure it would keep his ears warm under his hardhat out in the oil patch. That cashmere will indeed keep his ears warm, as will the fleece with the dinos on it. I should know what movie those dinos are from but I haven't a clue! I bought that piece of fleece on clearance at Wally World sometime last year.
I'm glad Rich likes his new hat! Just to clarify, I did not make this hat for Richard. He saw it laying on my desk and put it on his head while saying, "This a really cool hat, Mom! I need a new hat, one that will keep my ears warm." It became his at that point simply because he'd already claimed it as his own!
I have another bucket hat in the works. The wool sweater layer is all sewn and I'm working on the black velvet liner.

I've had three sales in the Etsy stores this past week. I don't usually make the packages pretty but it seemed appropriate for the things ordered to be sent in cool packages so.... 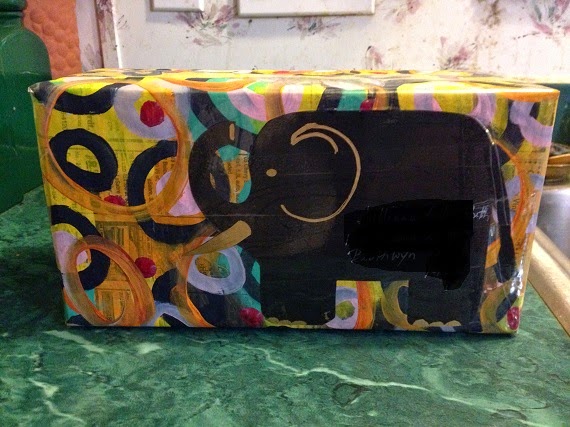 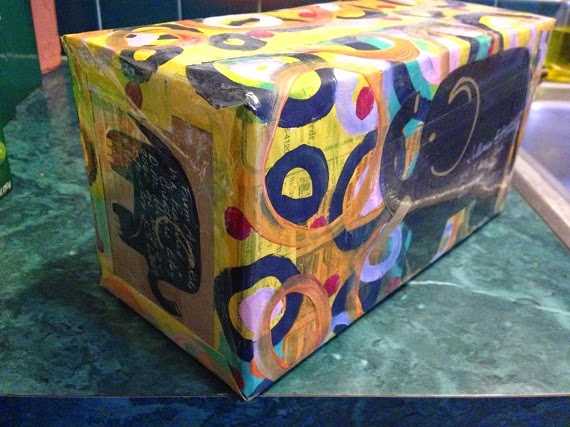 A toy plastic elephant being sent to a three year old for her birthday got the royal treatment with painted newspaper and an elephant address label. There is a handmade card with a cute little elephant on it inside this package that I forgot to take a picture of before I sealed this package. 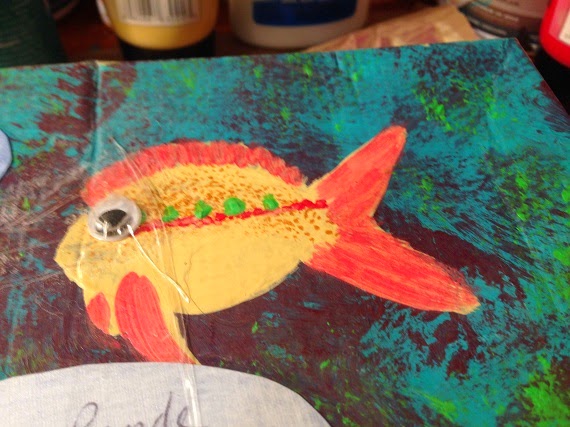 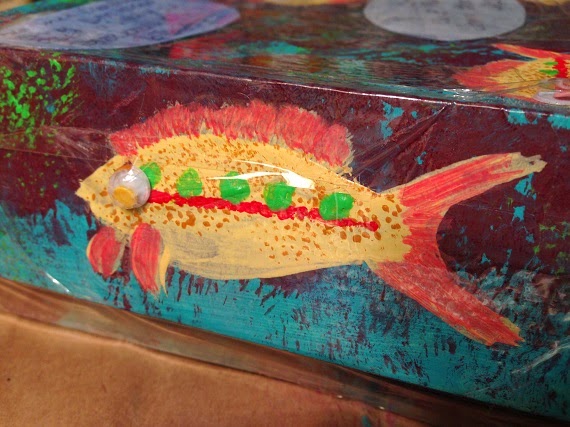 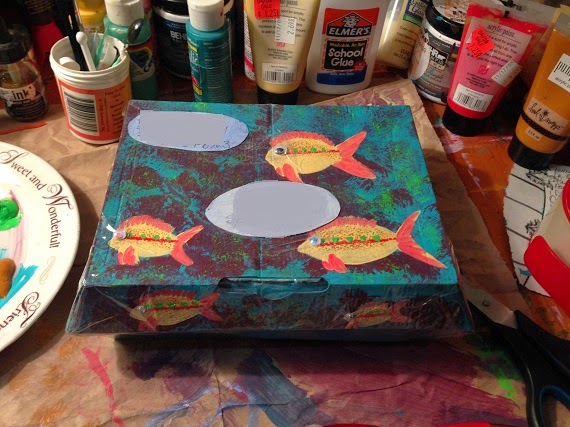 And a fish bottle opener got the fish treatment. This is a painted breadstick box from Pizza Hut. No breadsticks ever say it though. It isn't exactly square on the sides....I just taped it up good and will hope for the best on its journey to its new owner. Yes, I did put googly eyes on the fishes! And then taped over them with packing tape so they stayed attached during the journey. The box is painted in acrylics.
I am in hopes that the recipients like their colorful packages.

The other package got prettied up as well but I didn't really do any artwork on it! It's a UPS envelope with promotional photographs of 1980s country music celebrities in it. I don't think UPS would appreciate my using one of their envelopes to send something through the USPS so I covered up all the UPS logos with scrapbooking paper.

I will get back into the 'swing of things', art-wise, here in the next few days. I'm trying desperately to turn my nights and days back around so I am sleeping in the dark and awake when it's light outside. Wish me luck on that! 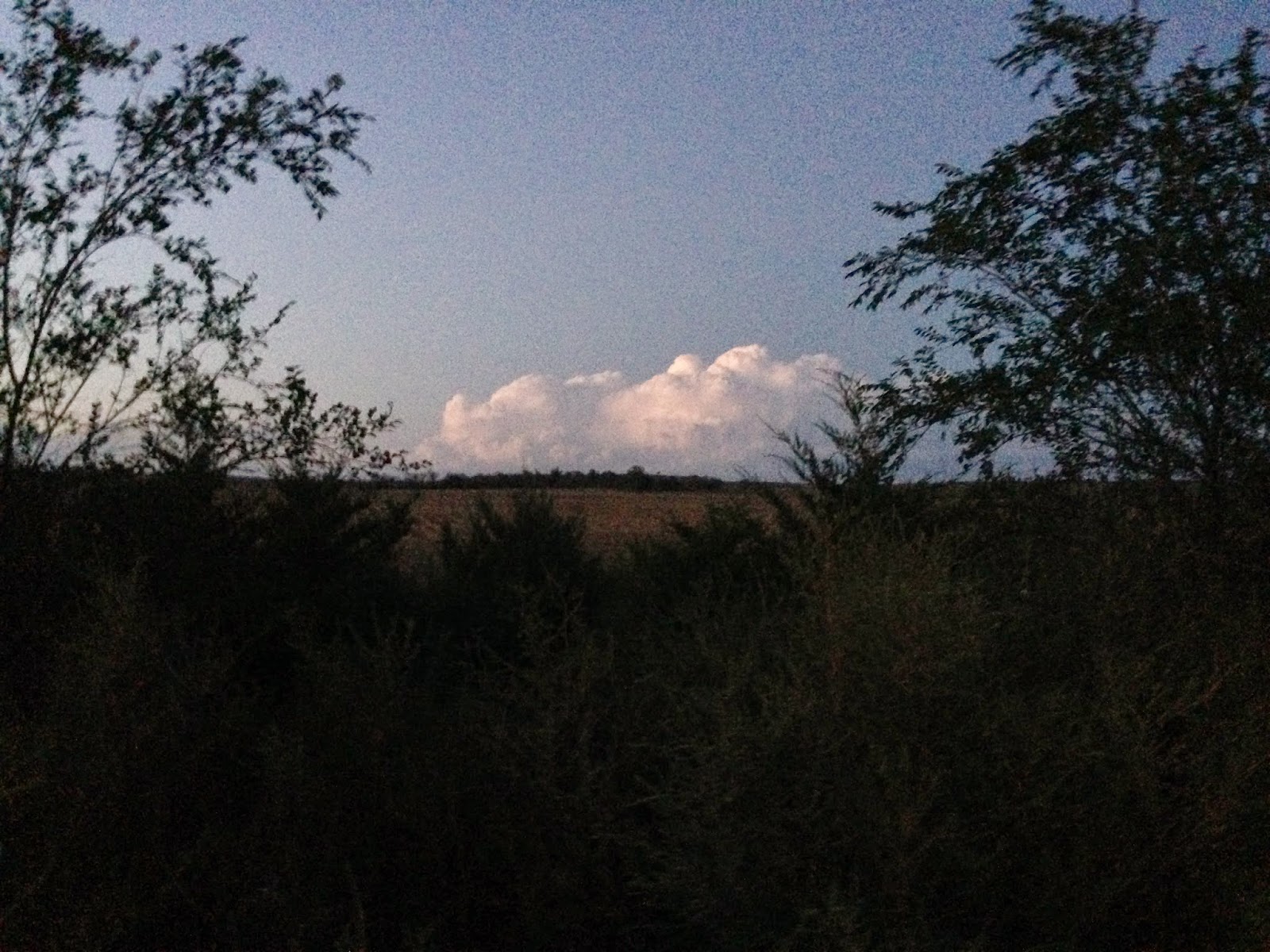 It hasn't rained in days but there was a gorgeous storm in progress to the north the other evening. This is your picture of the soybean field for this post. I've been asleep for days, no light to take a proper picture of the field. I'm pretty sure they haven't harvested the field yet, though to be honest, I haven't looked to see that that is the case. I will be awake for part of this day and I will get another picture of the field before the sun goes down!

Sheesh, I would be honored if one of my kids picked up something I made and claim it as theirs. Mine are hard critics.

Congrats on the Etsy sales! Lucky folks with beautiful packages! I love that Elephant one the most. :)