A Fish Picture, Some Flowers, Some Birds and Some other Stuff

I hope everyone had a great Thanksgiving! I spent the day at my sister's house next door. Both sons were otherwise occupied so I didn't get to see either of them. I did talk to them both though.

I got it in my head last Wednesday that I needed to complete just one more fish picture for 2014.
I have a bottle of purple wall paint (sample) that has been nagging at me for a few weeks. The bottle was almost empty and when a bottle gets down real low I think I have to use it up as quickly as possible. So that is why the fish picture is heavy on the purple. 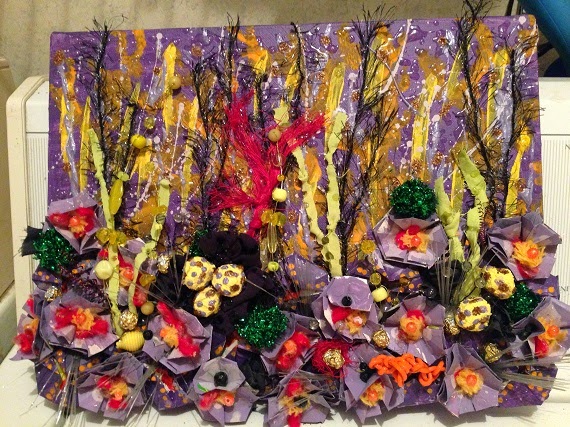 I had made a couple of very big (soccer ball sized) bucky balls earlier this year and they sat on the shelf in my livingroom through the heat of summer. The humidity did a number on them and they ended up collapsing. It took me better than a couple of weeks to make those two balls! I kept them both on a shelf in my cutting room waiting for an opportunity to put some of those units to use. A fish picture was that perfect opportunity. 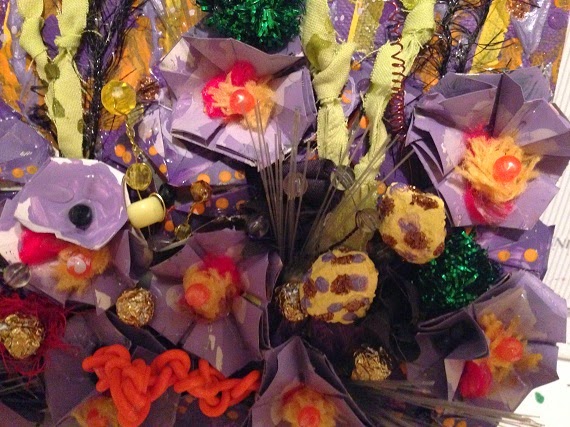 I painted the units with that same purple wall paint. They were originally pages from a 1972 college yearbook.
When a fish picture is made, all sorts of odds and ends are incorporated. The little yellow spotted balls came from the last fish picture. I made them when I made components for the last picture anyway. I don't believe I actually used any of them then. There are still a few left in the box where I put all the odds and ends when I save them for future use.
The yellow tufts inside the purple units are from the last fish picture. Leftovers. 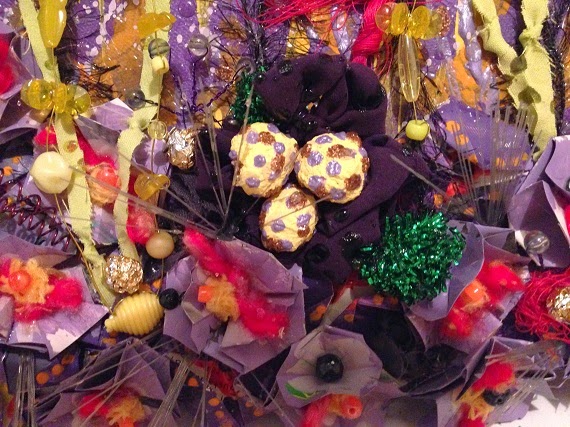 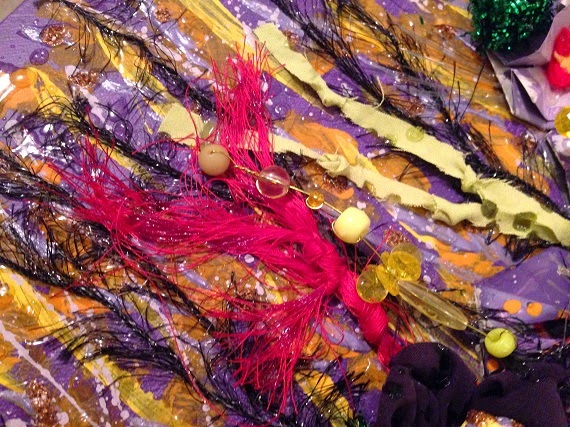 The red is sewing thread gathered and knotted and cut into an organic plant like shape. The green fuzzy things are wired garland for a miniature christmas tree. I had previously crocheted it into a round intending to use it on a fish picture. I cut it into smaller shapes and then rolled it between my palms to make a small ball.
The yellow beads are strung on wire. 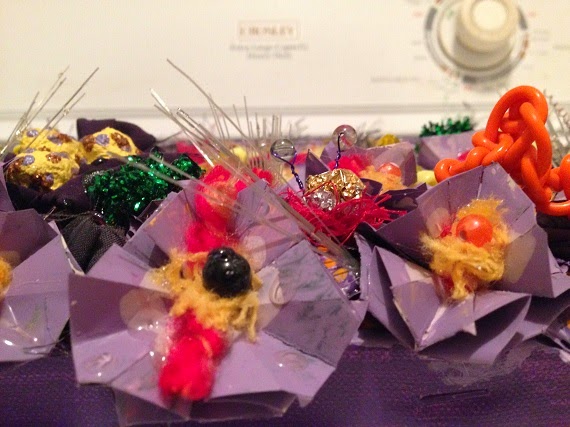 The little sticks poking up are broom bristles. The bright orange thing in the right side is coated wire tied into knots and made to look like it belongs in the sea. As the saying goes.... I use everything but the kitchen sink when making a fish picture.
On an individual basis, none of this stuff looks like it belongs in the sea, but on a whole, put together, it seems to work as a seascape. 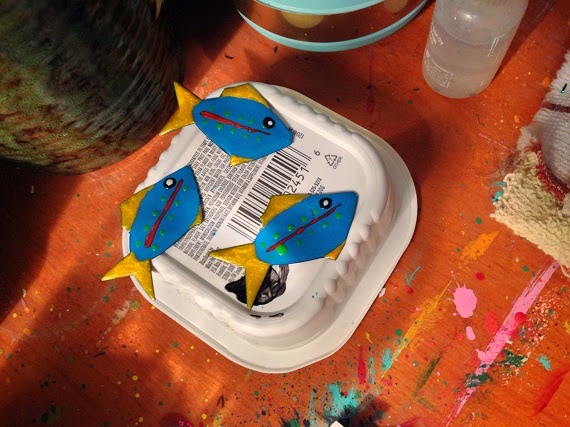 These are the fishes that will go on the fish picture.
I've actually already put them on the canvas but I forgot to take a picture of it before I downloaded the camera to the computer to do this post. The fishes are black cardstock painted with fingernail polish.
This is a small fish picture. It is a wrapped canvas measuring 11 x 14 inches. 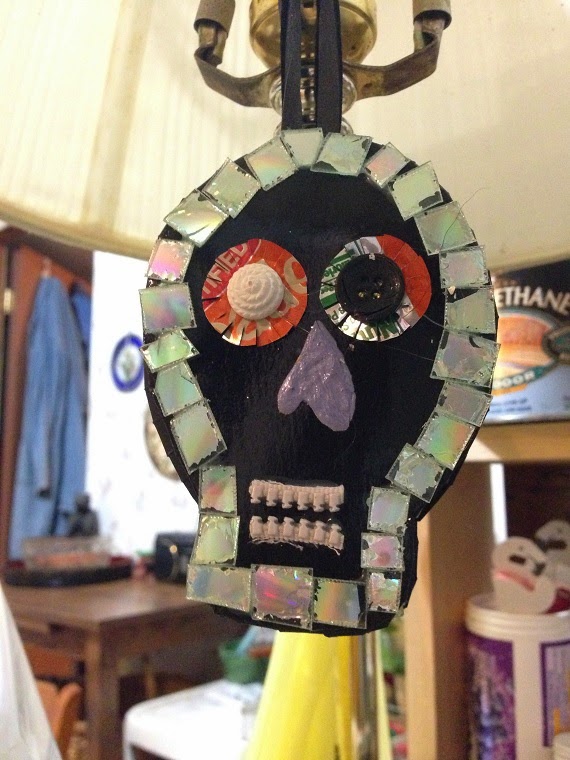 All of the skulls are now finished. I didn't show you both of the hangy skulls. You've already seen them all anyway. I put two skulls back to back and glued them together with a length of leather thong in between them for a hanger. 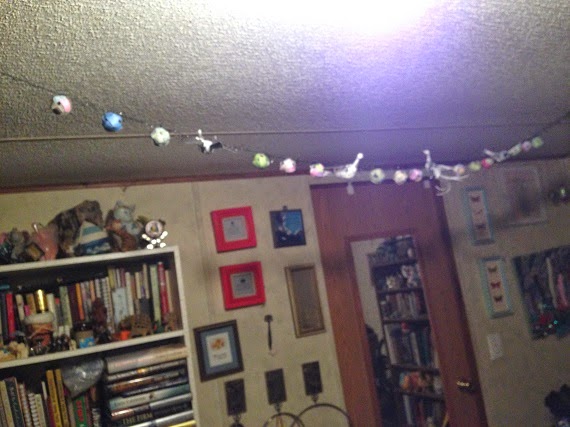 I strung a garland as an experiment. 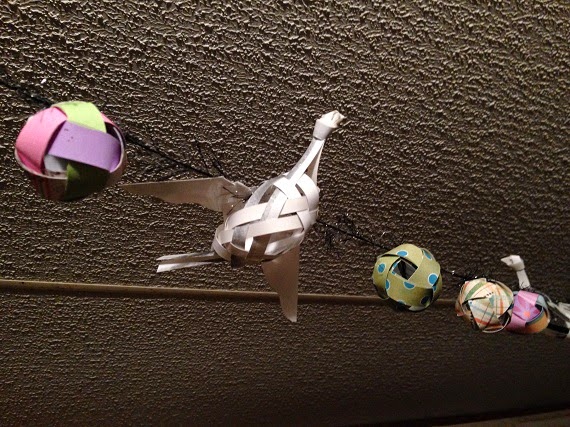 I dragged out the woven paper birds and the woven paper balls I made sometime during the past year. The balls are knotted to the string (eyelash yarn) but the birds are just strung on the string.
It looks pretty cool in person but getting a decent picture of it will take someone with MUCH better photography skills than I possess! I think this garland will end up on my Christmas tree when I get around to setting up. 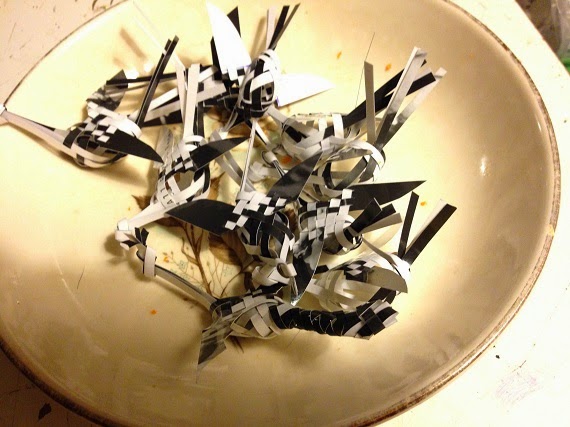 I made all of these tiny birds and one dragon on Thanksgiving day. I don't know how many are there. A dozen or so... I sent five of them to my friend Cherri yesterday. These little birds are only an inch and half wide. They are made exactly like the birds in the garland. Those birds are about 3 inches wide. 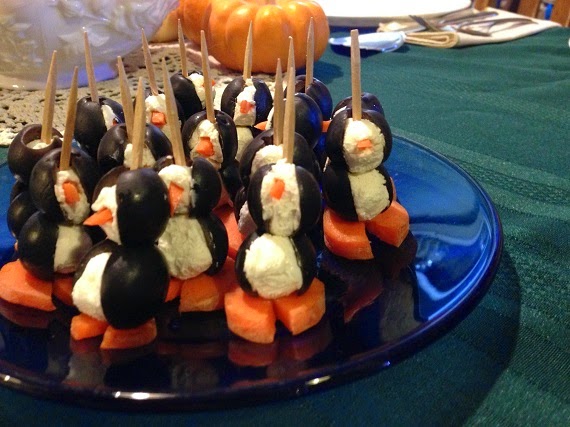 This was my offering, along with Pistachio Pudding for Thanksgiving Dinner.
Cute little buggers, aren't they? :) They were a big hit with the kids! The pistachio pudding must of been a hit too cause the bowl was empty by the time I was ready to go home! These guys are made from cream cheese, black olives and raw carrots. 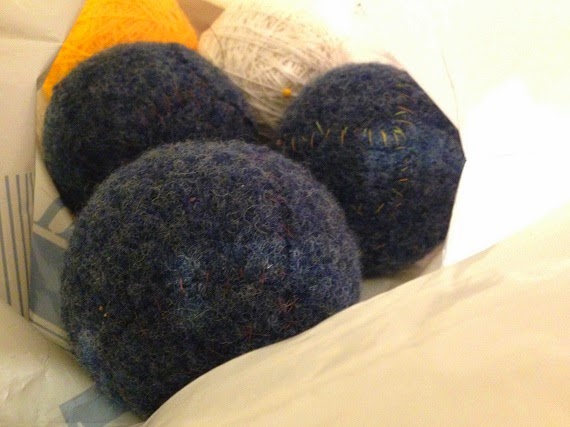 I'm still working on the wool balls. Three down, two and half to go. There's one laying on my desk that has about half of its wool cover sewn on.  Once all six are done I'll begin embroidering them. 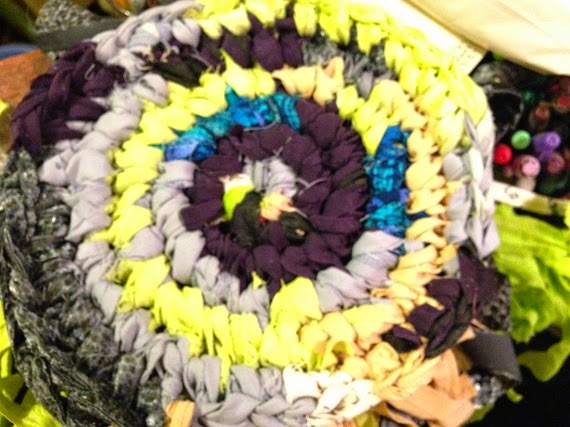 I'm still plugging along on the crocheted seam basket. I added another round to it the day before yesterday. 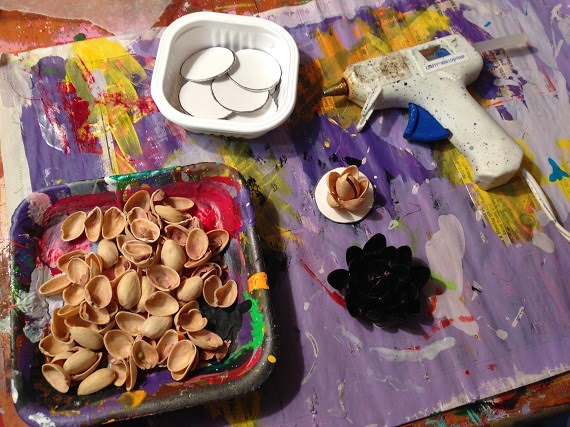 The pistachio pudding resulted in pistachio shells (and a nice little snack of the leftover pistachios not needed for pudding). 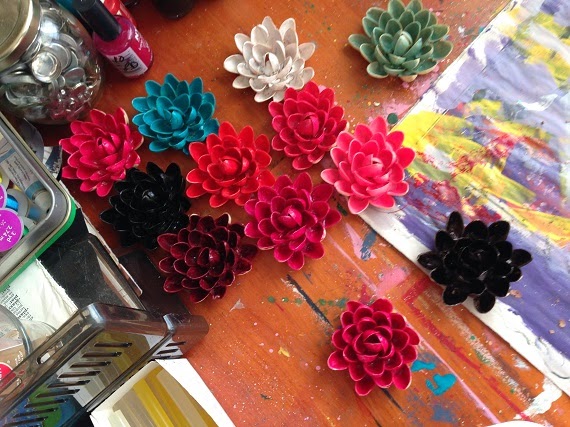 Pistachio shells make beautiful flowers! I painted these with fingernail polish. My favorite one is the seafoam green one up in the right hand corner. It looks like porcelain. Only one of them is actually black. The other dark one is really brownish gold color...almost black but when you see it you know it's not really black. All of the pink ones are a different shade. This picture was taken before the flowers were completely done. I only finished them a few moments before I decided it was time to do a blog post. I'll show them off with the finished fish picture in the next post.

Arts and crafts will slow down a bit until after the new year. I have some unartful projects to work on in the coming weeks as well as working on the Christmas festivities. Arts and crafts won't stop entirely. If that happens, I have croaked! I'm not ready to croak just yet! I'll just be busy with other things and arting won't be high on the list of things that gotta get done!

I have things in progress as you all know....You will probably see some folded paper trees in the next post. And I hope to have worked on the red ribbon basket/tote/whatever the devil it becomes. I put a roof on one of the little chipboard houses earlier today. We'll see about what happens with those in the meantime too.

For now, this is all I got!
Thanks for hanging around and
Remember...
Be good to one another!
It matters!
Peace
831

Wowzers! You have so many great projects going. I love how all of those items make a reef! The 'stacio flowers turned out gorgeous! Great idea to use that garland on your Christmas tree. :)