A Whole Bunch of Critters!

It's been two weeks since I made a post. I don't really have much to show in this post except a bunch of critter magnets and a couple of books. I haven't downloaded the pictures from the phone today so there will be another post soon (like REALLY soon) when I get that done. For now though, let's just go with what is downloaded.

My sister called me on the phone one day a week or so ago to tell me she had a problem. She's an arty person just like me and is playing mad scientist all the time as well. She started making fish magnets (mixed media) and had sold some of her fish magnets to some folks she works with. She's the lunch lady at an elementary school...anyway Mr. Somebody-or-another (I forget his name) asked her if she could make him some chicken magnets to send to his mother out in Arizona. She freaked! She told him she doesn't do chickens but she knew someone who could do some chickens for him. She freaked cause it took her by surprise that someone was asking for something she had never made before and she (says she) doesn't know how to draw. Well, ANYONE can draw! I keep telling her that but she doubts me. So the task became mine cause she just wasn't going to even give it a try! 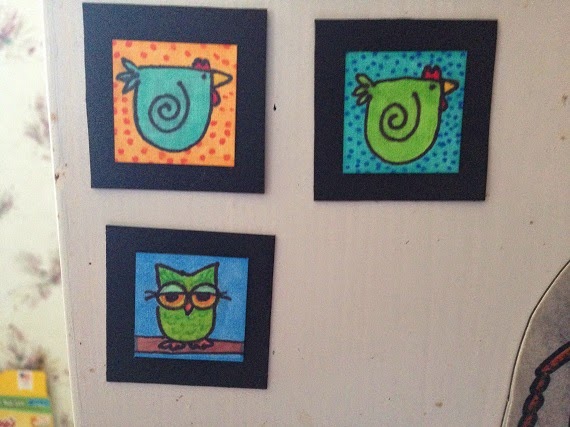 It was so fun putting those little magnets together I drew up a bunch of twinchies and inchies and odd sized tiny pictures to make into magnets.
The two chickens and owl in this picture are all inchies. 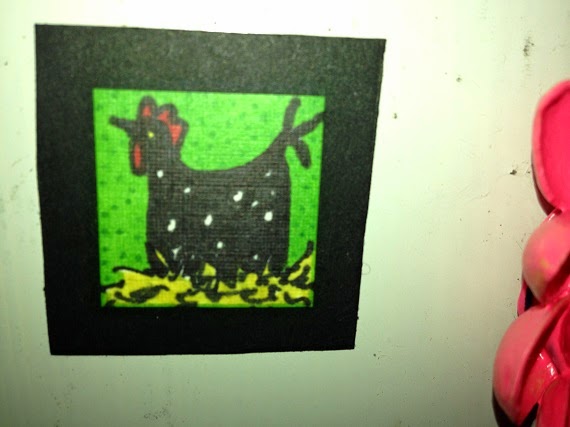 I sold this one to my oldest sister Elaine for $2. Took me all of 5 minutes from start to finish to make this one. That includes drawing and coloring the chicken. This one is an inchie. 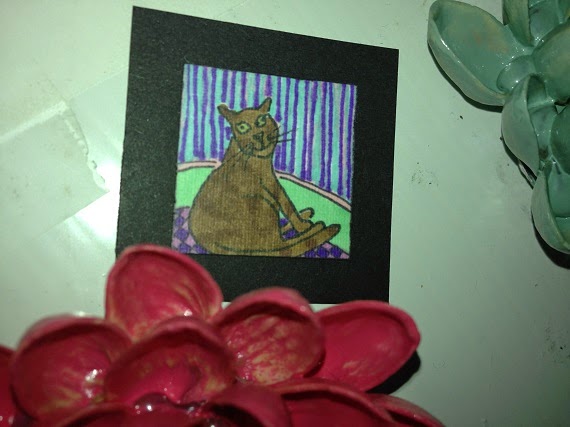 Beings I really need practice on drawing cats, I drew a few of those as well. Those are pistachio shell flower magnets in the picture with this cat. 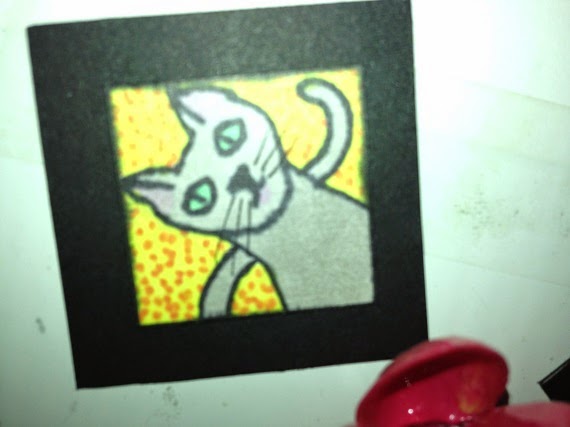 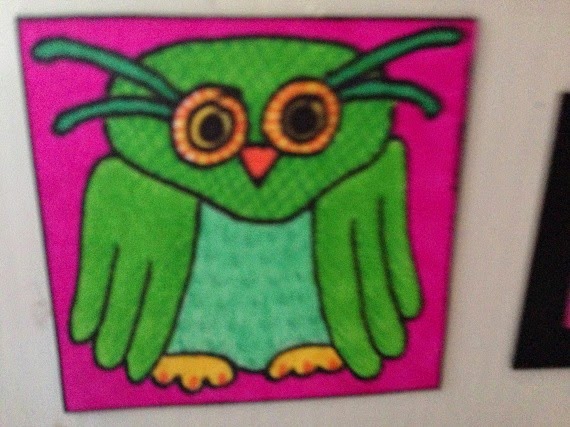 Owls need practice too!
This one is a twinchie with no cardstock border. All the others are mounted on cardstock and then adhered, with double stick tape to an advertising magnet that was cut to the size needed. 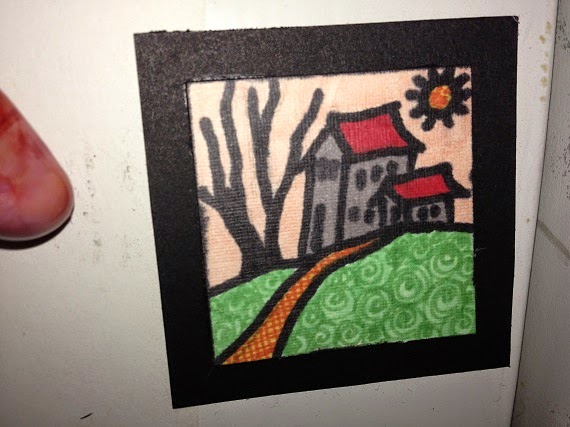 this one is a twinchie 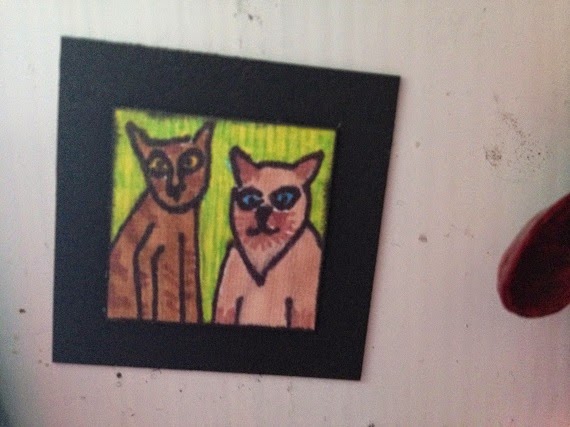 I sent these two characters to my sister, Jeanny along with all the chickens in this post. Except the one I sold to Elaine. 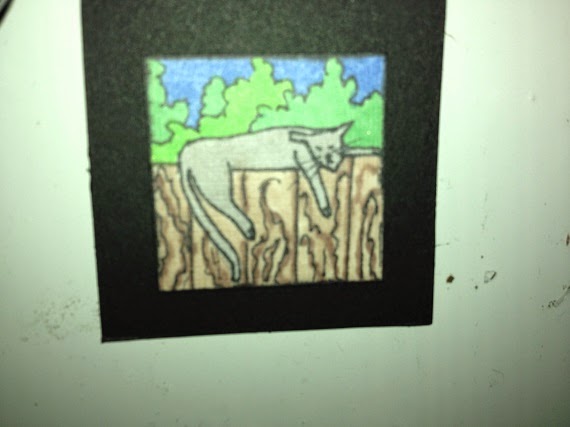 this one is an inchie. 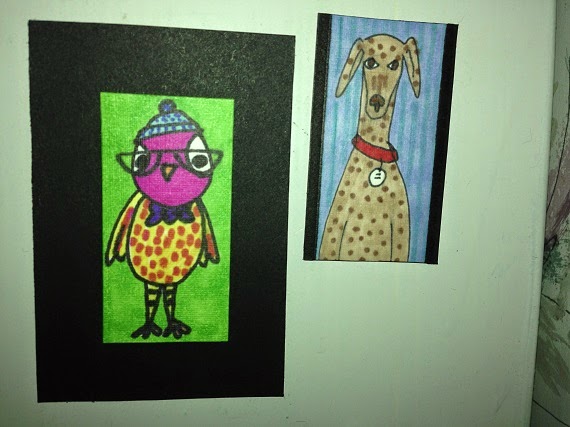 Then the owls got strange! Not sure what size that one is. 1 x 2 inches maybe? not counting the border. The dog is the size of a moo card. 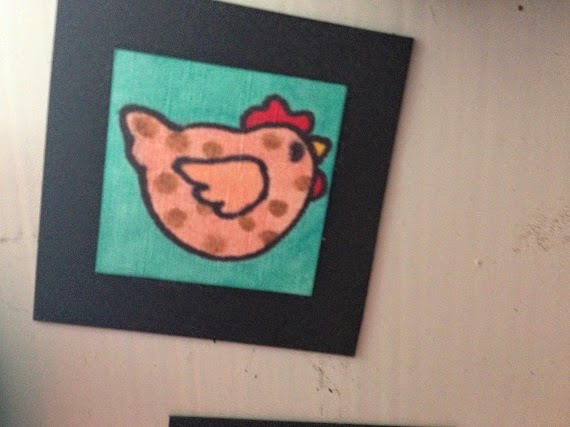 All the little chickens were snatched up by Mr. Somebody-or-another for his mother. 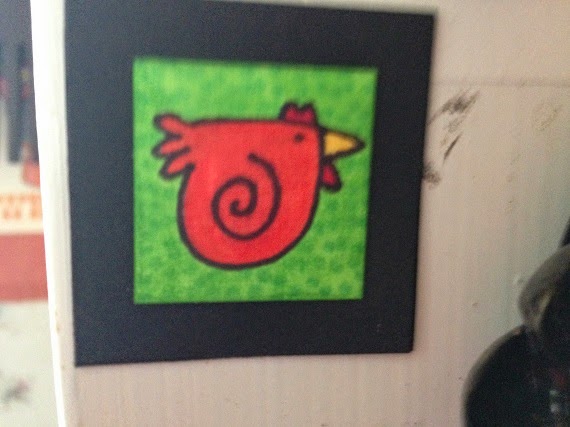 This one too. All the chickens are inchies. 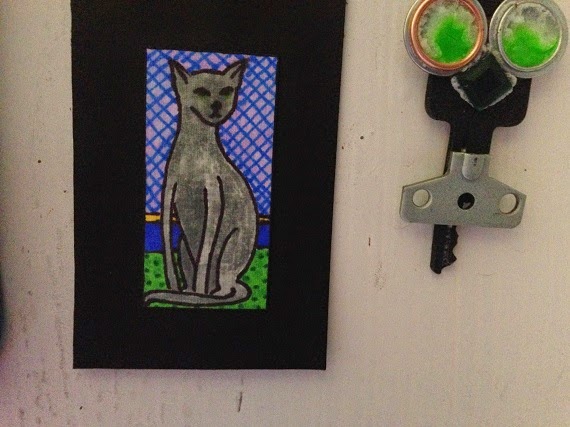 this one is moo card size, I think.  The little key junk magnet beside the cat was done a few years ago. It was a failed experiment as far as I'm concerned. Nothing special about it for sure! 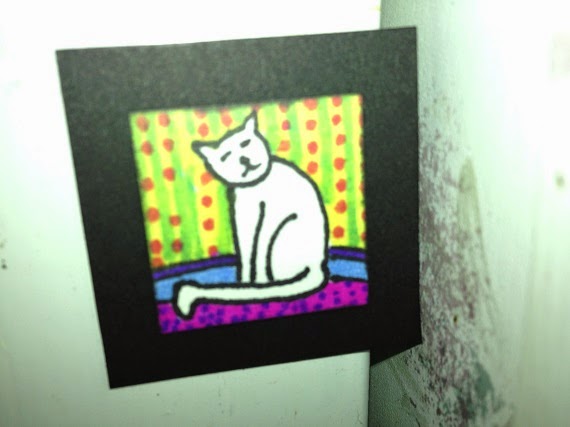 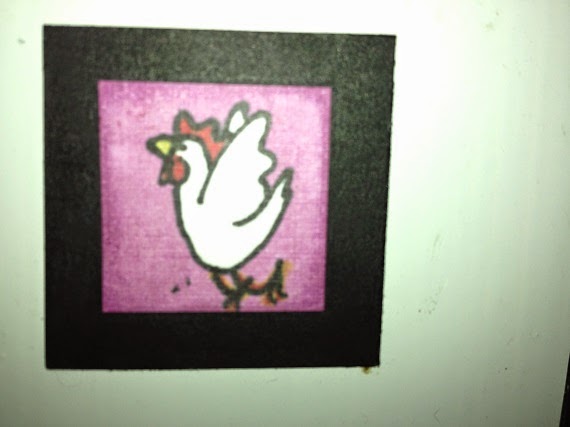 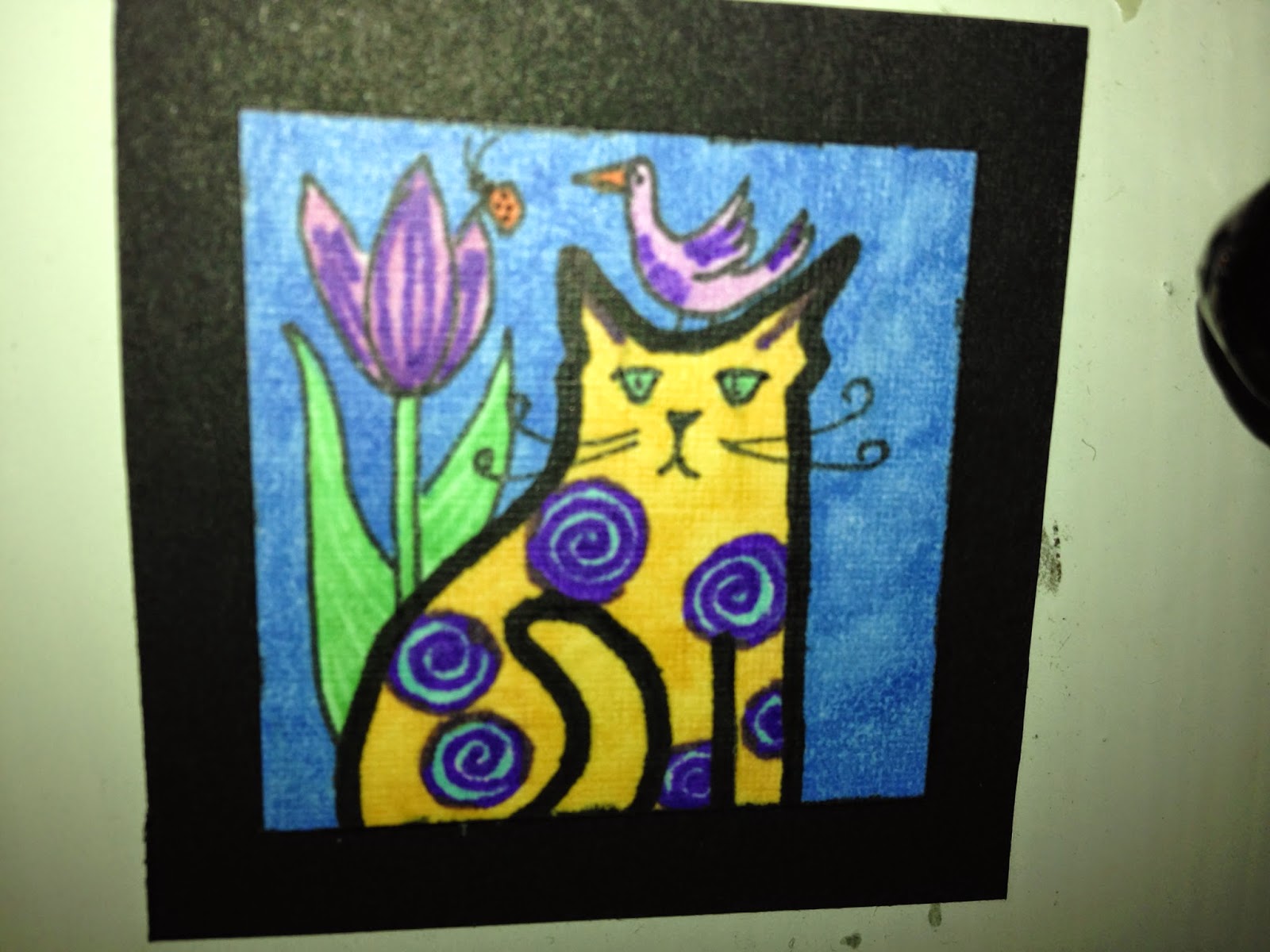 this little yellow cat is a twinchie.
All the drawings are done in marker on cardstock.

I found some double stick tape at AS&S that is reasonably priced and works like a charm! Sticky, sticky, sticky! Great stuff! I got mine on sale for $1.50 a roll, but even at $3.50 a roll, it's a heck of a bargain! That link will take you right to the tape I'm talking about here.

In the post before the last one...last one was the tutorial for the embroidered balls, I showed you all a stack of paper destined to become books. 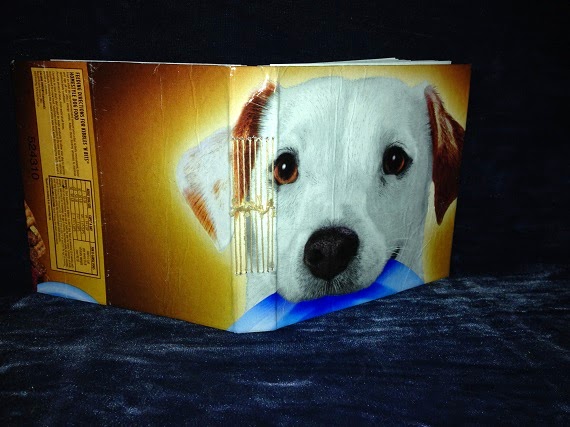 We have books!
This one is 6x6x1 inches. No art on it as such....It's cover is part of a dog food bag. Sewn in the pamphlet stitch. It has about 140 pages of computer paper pages. I stiffened up the dog food bag paper with some cereal box chipboard. I used that double sided tape to adhere the dog food bag to the chipboard.
Some books don't turn out as well as others. There are sometimes sewing issues. This dog book turned out wonderfully in the sewing department! Nice and tight!

I have more pet food bag books in the works. Not sure how many books that will end up being. I should be able to get at least two books out of each dog food bag. (Fred gets a variety of dog foods, not the same kind every time I buy him food. I never remember which one I bought him previously! Trust me, he doesn't complain! So long as the bowl is full, he's happy! And changing his food doesn't seem to bother him any!) So stay tuned for more books! 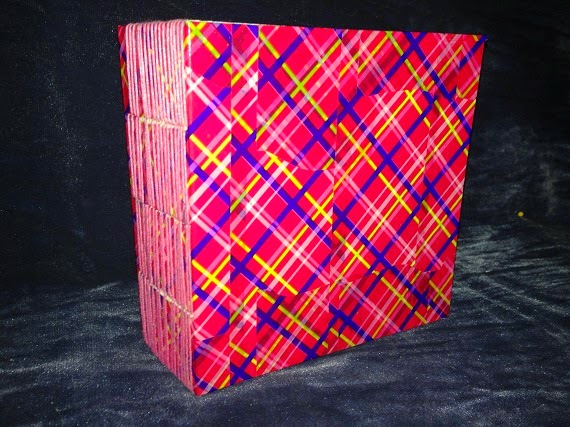 And last but not least of the books is this one. I've no idea how many pages it has. I started out with 24 signatures to sew in but still had quite a gap when those were done so had to sew in another five or six or so. This book is almost 3.5 inches thick.

That's it for now. I'll be back again either later today or tomorrow to show off the stuff not shown off in this post.
I finished the big fabric basket. I've made some wool rocks for a project that I don't know will work out or not. Need to make some more rocks before I know if it will work as planned. I've made a few envelopes and some other endeavors occurred as well.

Thanks for hanging in there!
Remember
be good to one another!
It matters!
Peace
831

You're always so busy! Fabulous that you are selling too!

The chicken from the first pic are so cute!