Isn't that the name of a song? Here I am again on my own....la la la la....it's a fleeting small voice running through my head at the moment. I may still be delirious ..... Haven't felt right for weeks!  I will be singing that song in my head until I figure out the rest of it!

I really haven't been feeling right since the bout with pneumonia mid April. The creative endeavors have slowed down considerably! I'm still making things, but I'm sleeping more than normal and as I've always said, "Oh how I wish I could create in my sleep!"

The calendar says today is Thursday. I could have sworn it was only Wednesday. I've lost a day somewhere along the line.

For the last couple of days I've been making fabric yarn from different garments I took out of my closet that I never wear anymore. 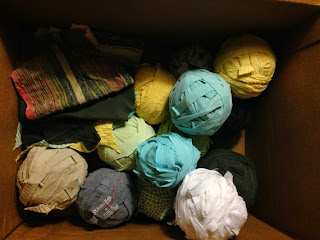 13 balls and counting. I'm saving the larger pieces of fabric that couldn't be turned into yarn also. I'll use those smaller pieces in art doll projects, fish pictures or something else. 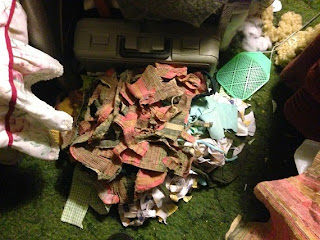 I've also been making a major mess on the floor by the recliner where all this disassembly of garments is taking place.
The fly swatter is a necessity. I killed a June Bug with it earlier this evening. Then Fred promptly had a snack of June Bug. I told that silly dog that when June Bugs are eaten, and there are people who eat them in the world, they are usually cooked first. Fred didn't care about the cooking part, he likes them raw apparently.
Eventually, once I get enough seams gathered, I will make something out of them. Last box of seams I had, I made hot pot pads out of them by weaving them all together on a circular hoop.
What I really want to do with them probably will not happen. I'd like to sew them all together into a fabric and make monsters. I don't relish the idea of sewing them all together by hand. And beings I can't seem to get along with a sewing machine to save my soul, the seams will probably end up in another weaving project. 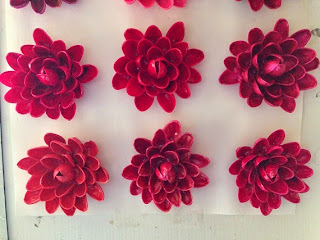 I spent a couple of days making more pistachio flower magnets. All of these pink ones are a different shade of pink. 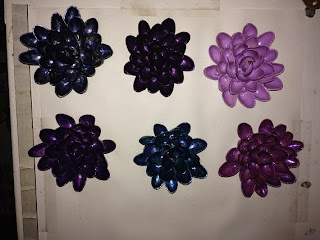 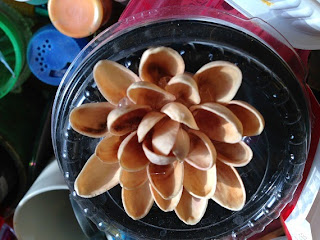 Here's a 'naked' pistachio flower, before painting.
Easy peasy things to make! I'm almost out of pistachio shells. Note to self: Buy some pistachios, you need more shells!
I really do like making these flower magnets! 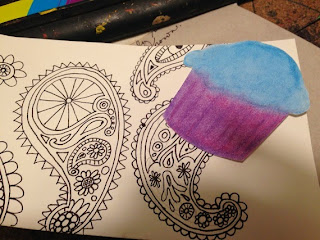 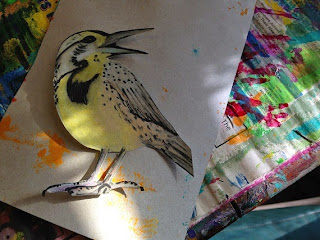 So I attempted a bird. I like how my Western Meadowlark turned out! He's the state bird of Kansas and I see them frequently in my yard. His tail is cut off cause I didn't have enough room on the paper for it! I cut the bird out and it will end up on an envelope, I think. 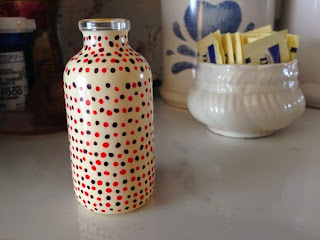 Then we have this cute little rubber coated glass bottle that I painted with acrylic inks a week or so back. I have 20 of these little bottles. I bought them because they were CHEAP and because I thought they were a lot bigger than they actually are. That bottle is only three inches tall. There will be more of these in future posts. I'll probably paint the others. Maybe some landscapes, flowers, animals? I don't know! Whatever the muse says when the time comes to paint them, I guess.

That ends the art part of this post. Perhaps the muse will get her crap together soon and the art endeavors will speed up a tad!  Lord knows there are enough projects in the works to keep the muse busy! I don't know what the heck she thinks she's doing running off on vacation without me!

There has been activity in the soybean field! 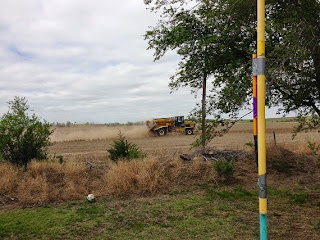 I was sitting at the kitchen table four or five days ago, working on the pink pistachio flowers when I kept hearing this awful noise! The fourth time I heard it, I got up to go see what the heck it was. It was this guy zooming all over the soybean field, spraying something. 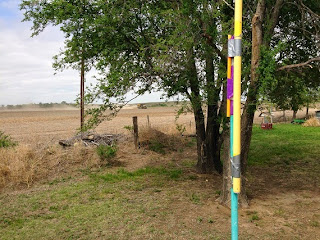 Thankfully the wind was blowing to the north and all that dust and whatever the devil he was spraying blew away from my house. 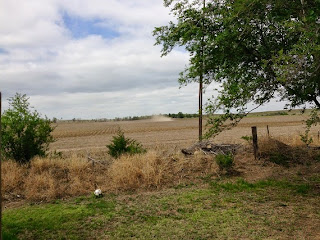 He really was zooming all over that field! Just guessing, I'd say he was going about 40 miles per hour. He wasn't dilly dallying at all! 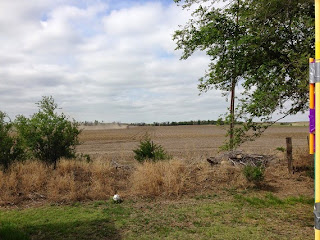 I don't know how many acres that field is but it didn't take him more than hour to cover that entire field! 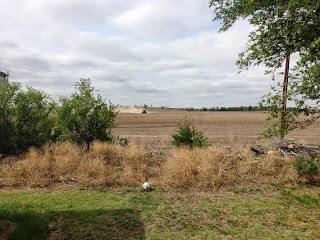 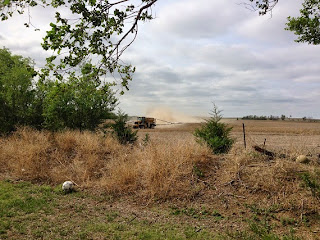 He went all around the field, six or seven passes, and then started going in lines across the field. I guess he just wanted to change things up? I have no idea what his reasoning was.
My brother says he was probably spraying the field to kill musk thistle. There isn't anything except soybeans in that field though. I have no clue what they're doing in the field. I'll keep you posted.


These next pictures were dated 6 May 15. It rained that day. 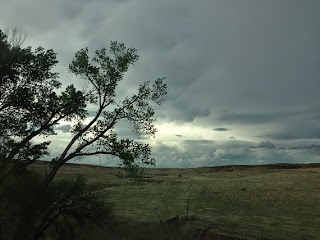 It didn't rain at home though. We had to go looking for the rain. Ma came over and said, "Let's go for a ride." I seldom say, "No." to my mother so off we went down the highway to the east. 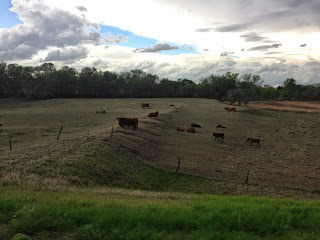 Lots of pretty clouds. Lots of green grass, wheat and cows. Brown cows! We say some black cows too but they were too far from the highway to take their picture without stopping to do so. The brown cows were photographed while going down the road at 55mph. 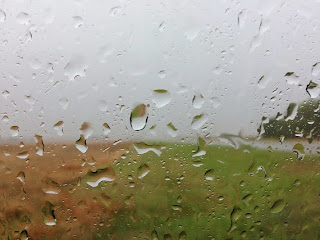 We found the rain about 17 miles east of home, in the next county over. It was raining so hard we HAD to pull off the highway. 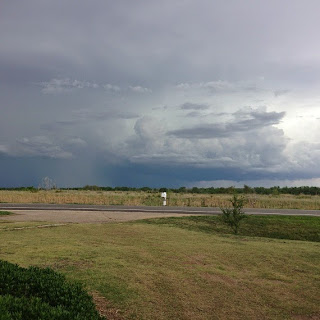 Back at home, the rain was all to the south of us. Raining like crazy in Natoma! The dark cloud center picture is about 25 miles away. Give or take a few. All we got out of that storm were a few sprinkles.
It has since then, rained cats and dogs here at home. Last three nights it has been rainy. Nothing severe thankfully. Rain is quite welcome! 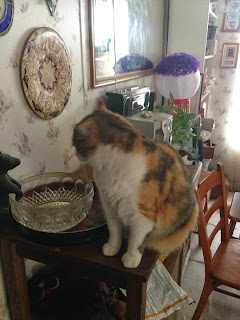 When I got up yesterday, this cat was sitting by the empty food bowl, scowling and yowling to let me know it was indeed empty. I told Miss Lola cat that she would have to wait until I made a pot of coffee before her bowl would be filled. 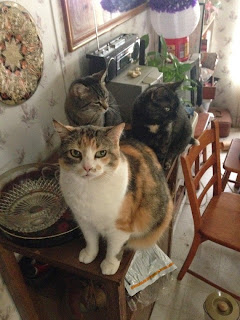 She went and got reinforcements. She's none too happy about that bowl being empty! What the heck was I thinking, not filling it before I went to sleep?
If looks could kill, I would have never got to make coffee that morning!
LOL

You all will be happy to know, the food bowl was filled and those three felines ate till their bellies were full and then they all went to my bed to take a long nap.
I only fill that huge bowl about once every four days or so.

That's about all I have for today.
Thanks for hanging in there to the end!
Remember....be good to one another!
It matters!

An excuse to eat pistachios! Love that...
That Meadow lark it Ah-some!!

Hmmm, wonder what will go in that field next.