The muse is still quite fickle these days. Slow going in the art department! 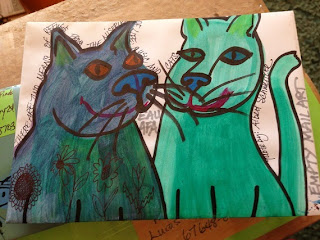 These two characters went Newfoundland, Canada a few days ago. Sometime last week. I'm having a devil of a time keeping my days straight right now. The fibro fog rolls in and I'm lucky to remember my name, let alone what day it actually is! 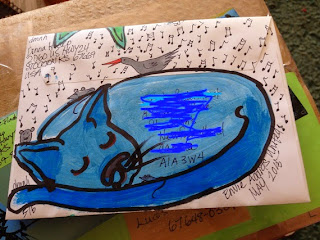 I painted the envelope some months back. I added the words and some of the little stuff with the cats the day before it went postal. I hope Cecile likes it!

I haven't really painted anything for ages! Unless we count the brown paper I painted another shade of brown this afternoon. We'll visit that endeavor some other day. A painted brown piece of paper is rather boring at this point. I need to pretty it up a bit first. 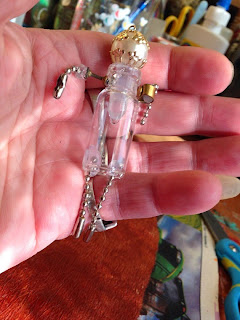 I made a couple of glass vial dollies. This one has ball chain for arms and legs. Her arms also include a screw back earring back and a brass clip of some sort that I stole out of brother's brass bucket out in the garage. 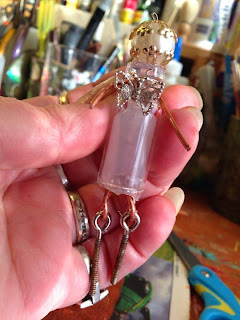 Another glass vial dolly. This one with copper wire arms and thighs. Her lower legs are eye screws from an old piano. The butterfly is a lone earring I removed the post from. Both glass vial dollies have plastic beads with brass bead caps for heads. These two need a jump ring in their heads so they can hang around somewhere. 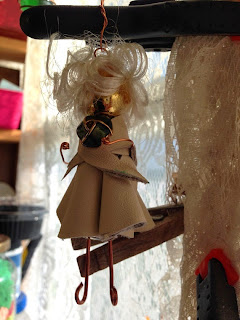 I may have already shown you all this one. She's made with a glass vial also but she has a different head and she's clothed in a white leather dress. Her arms and legs are copper wire and her head is a glass Christmas bauble.
All the glass vial dollies are about three inches tall. 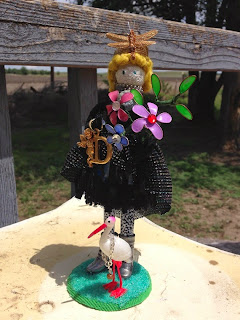 This is Darla the Dragonfly Queen and her sidekick 'Stork'. Either she is a giant or Stork is a mini! (Real storks are about 4 feet tall!) Stork is a plastic cupcake topper with his stick removed. I started her on Saturday and finished her this morning. Her body is a fingernail polish bottle with the cap still attached. She has a couple of tiny sea shells for boobs, her head is a styrofoam Christmas tree bauble. Her hair is thick yarn. She's dressed in the plastic bag my new glue sticks came in (petticoat), some black lace hem binding, various different black ribbons and yarns and some sparkly black material that was once a blouse. Her legs are a ballpoint pen I took apart. Her legs are attached to a milk bottle cap that is attached to the bottom of the fingernail polish bottle. I painted her legs with acrylic ink to cover up (mostly) the blue writing on the white plastic parts of the pen. Her feet are a pair of Barbie boots that I painted with fingernail polish to better match her outfit. They were light blue in color. She doesn't stand straight so I had to attach her to something that would help her stand. I covered a metal juice can lid with green fabric and then glued Darla and Stork to the green fabric with hot glue. I added green glass beads (tiny, holeless beads) with tacky glue. the colors are a tad off on my monitor, but the green glass beads pretty much match the green fabric. I gave Stork some bling with a bit of chain and a wooden bead. Her big D with the angel used to be a key ring. Her crown is an oval shaped earring with a stamped brass dragonfly added. The dragonfly was broken, had no rear end, so I added some glittery puff paint to make it look like it had a rear end all along. Darla stands about 7 inches tall or so. I made the wire and fingernail polish flowers and leaves over a few months time. I put the bouquet together this morning while having my first cup of coffee.
I make wire and fingernail polish flowers every now and then. I keep them on the shelf in the kitchen in a block of styrofoam till I need them. At the moment there are about a dozen flowers, 8, maybe 9 leaves and some wire frames that still need the fingernail polish treatment. I like her! 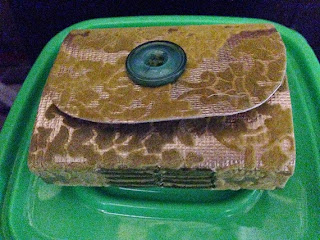 I made a book today. This one has flocked wall paper for a cover. I glued two sheets of it back to back so the inside of the covers look the same as the outside. This book is about 3 inches square, though it isn't actually square. The colors are all off in this picture as well. I sewed it together with green embroidery thread. It has five signatures of different kinds of paper. I just used the little scraps of paper that were cluttering up the shelf by the paper cutter. The button is plastic. I should have given it a different closure. This one is hard to get opened and closed again.

That's all the art I have for you all today.
I'm still cutting fabric yarn. I think there are about 18 balls ready to start crocheting something with. I haven't decided just what that something will be. I'm thinking a rug for by the front door, but it may end up being something entirely different. I just don't know what the fabric yarn will end up as.
And as usual, I have 'fifteen' other projects in the works as well.

As I was working on Darla and Stork this morning, I kept hearing a vehicle. I kept looking out the kitchen window to see who was here. Wasn't anyone here each time I looked. I should have known what I was hearing was in the field. 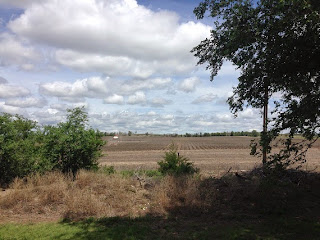 I didn't get a good picture of the truck spraying that god awful smelling stuff he was spraying on the field. I stepped out on the porch and the smell gave me an instant headache! 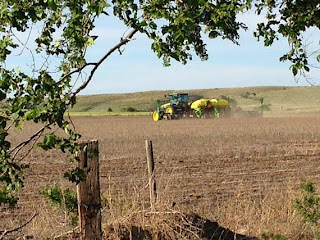 Then later this evening...it's now almost 11 pm... the green tractor showed up around 7pm. He's still out there as I type! I do not know what he is planting. I was going to go out there to the field and see what kind of seeds were going in the ground, but when I went out there at 9:30, he was still out there, plugging along in his John Deere, planting with the headlights on. 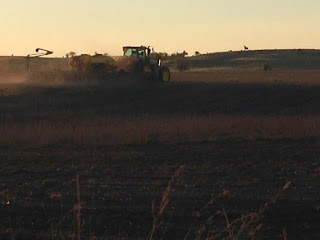 Sun's going down.
I tried to download a video of that green tractor, chugging around that field. I apparently do not know how to do that as I couldn't figure out how to download a video to youtube so I could download it here. It's taxing my brain way too much to figure it out today so you all will have to wait to see the video. 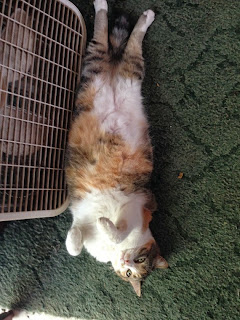 Instead you get this fat cat brat, Lola. 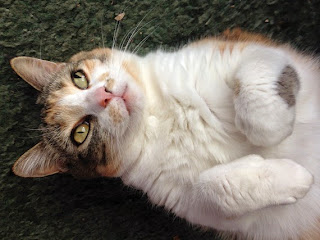 With her wonky eye! She laid in front of that fan for almost three hours in that same position, taking a nap till Fred dog came along and woke her up. 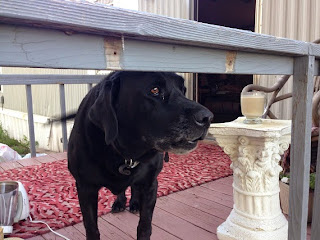 I wanted to show you all the video I took of Fred last Saturday when I had a house full of people. My sister Linda put a tiara on him. He was none too impressed but we all thought it was hilarious.  But yet again, this machine thwarts my efforts at entertainment! 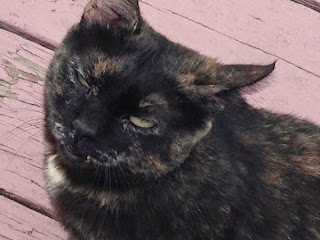 Tippy is none too happy with all the racket that big green tractor makes when it comes to the south end of the field. That's way too close for her comfort! 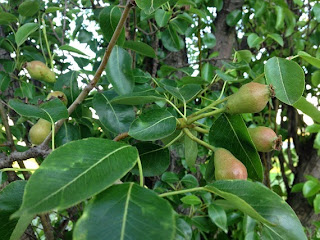 I took a walk out to the pear trees to take a good look at the baby pears. There seems to be a nice number of pears on one of the trees, but the other is rather sparse on the pears. They're looking pretty good for the time being. Now if we can get through the next three months with no major wind storms, I might end up with some pretty good pears this year! 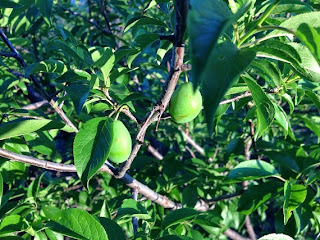 I do not have similar hopes for the plums. The plum bushes never produce a decent crop of plums. I have four plum bushes and not a one of them has more than a dozen or so plums that I could see. They are a beautiful color of green at the moment though.

That's it for me today!
Thanks for hanging in there!
Remember....
be good to one another!
It matters!
Peace
831

Those glass vial dolls are kewl! ...The flocked paper book looks like fabric...really fabulous. It's fun to also see the goings on at your place...your cats, Fred and the field! :D