It has been 25 days since I was here last so let's just get on with this. theres not a whole lot to show actually.

I got a lot going on but not a lot being finished. 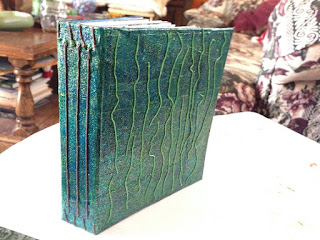 Except for this book. It started out as a box that frozen veggies came in. I painted it, glued some string on it and 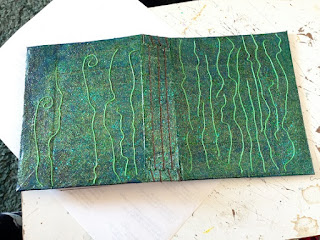 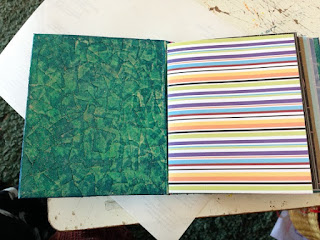 I filled it with random papers. Mostly scrapbook paper but there are some sheet music and other pages in there too. I think there are four signatures of six pages each. It's all sewn together with the same string I used to on the covers. 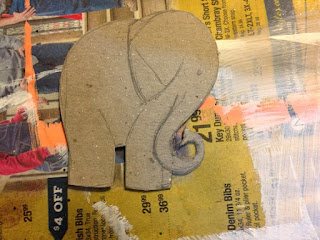 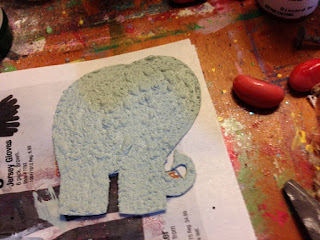 This elephant is a tiny little thing at only three inches high. I put it on the front of a book made from a jello pudding box.
Books have been hot and heavy on the muse's radar here of late. I really wish she would get with the program and finish sewing together the little books that are ready for sewing instead of starting new books! But that isn't how she sees things so I just go with her flow and try not to fight it. 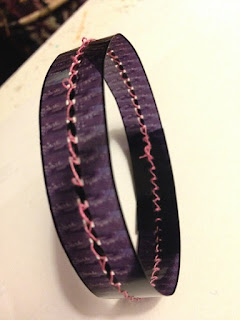 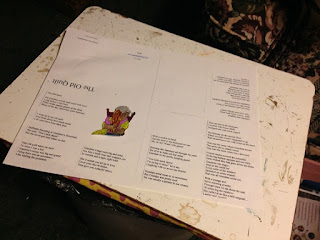 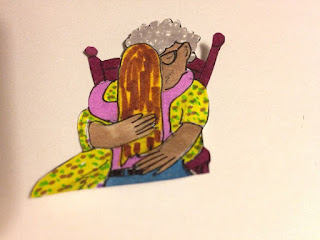 Grandma's hugs were always the best!  This drawing will go in the zine. The newest zine is the story of a quilt with memories from the past in the form a long poem. I wrote the poem some years ago. 2005 I do believe. More of the zine once it's done. 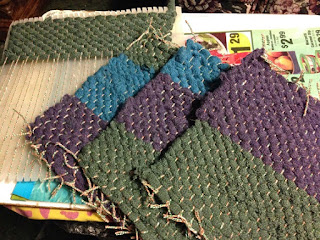 And as is usual with me, I have yet another unfinished (UFO) thing going. These woven panels will eventually become a market bag. I made the loom out of a lid to a square tupperware container. I found the lid out in the burnt house in my lid box.
The lid box is another work in progress. At this point I'm just collecting lids and bottle caps. The goal is to collect enough of them to do a lid mural on the side of the burnt house. I still have at least a year of collecting to have enough lids to start the mural. I have an army of collectors helping on that endeavor. It's odd how each of the collectors collects different lids. 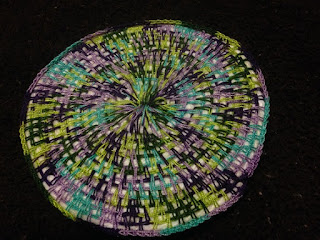 I made this hot pad trivet on Easter Morning while having coffee. It's macrame cord crocheted in a spiral with variegated crochet cotton thread. My monitor isn't showing the true colors at all. It's purple, blue, yellow and green in real life.  It measures about 9 inches across. 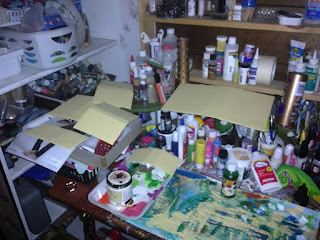 My messy work space in the kitchen with six book covers in the works. All are made from boxes that food of one sort or another came in. There's a cracker box, a couple of jello pudding boxes, frozen veggie box and a couple of candy boxes. I'll pretty them up with something or another eventually.
At this point they have been covered with masking tape and painted with wall paint. 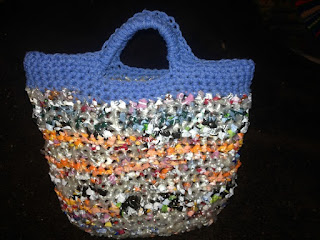 This little bag is crocheted from plastic bags and cotton yarn. The plastic bags are bread sacks, bagel sacks, ice bags and potato bags. I'm not going to save the potato bags with the black on them anymore because they were a pain in the ass to crochet! I do like how this little bag turned out though. It stands about 10 inches tall, is about 6 inches wide and 4 inches thick. I used cotton yarn at the top to give it a bit more strength in the handle.

I have been crocheting up a storm! 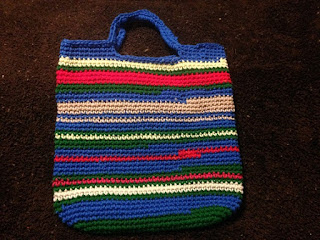 I have worked on the kitty book. Glued a couple dozen kitties in it this afternoon.

I started painting a little round box. Not sure where this is headed but we'll find out soon enough.

I've worked more on the crochet project I started three days ago. Give me four or five days more and that project will be complete! It's a 'let's use some of this crochet cotton up' project. It's coming along nicely. So long as the sleep pattern sticks to the pattern its on, this project will be done in a few days. I work on it when I get up in the morning. I've gotten up long before the sun has for the last six days.

And I got a new toy in the mail today that I will be playing with on a regular basis as well. You all will get to see the result of that playing once I have something to show you. The new toy is a rainbow loom. I don't intend to make a bunch of bracelets. I intend to figure this sucker out and make my own patterns of stuff. I have to admit that the cupcake I attempted, with a tutorial earlier today, was total and utter failure! We'll see what happens. I have about 10000 little rubber bands to work with so something should come about eventually!

I'm sure there are other projects in the works as well.

That's all from me today!
Here's hoping you all are well and happy!
Remember
be kind to one another
it matters!
Peace
831
Posted by Donna at 7:03 PM

I love the first book you showed. (It has a great color!) Bah! You're on your second Zine?! I gotta make one too...(I wanna trade for your newest one!)

Wow! So many goodies in one post!!! That book is awesome!!! I need to try this Zine thing...

Wow, you are always working on something or other, well done! I love the little Elephant...