Critters, Art and What is to come....

Hasn't been too many days since I was here so there isn't a lot of art going on but I'll show you some anyway.
It's been a busy critter day at my house so you'll get to hear some tales and see some pictures of some critters too.

We'll start off with the critters. If you are here for the art, just skip over all my critter ramblings! 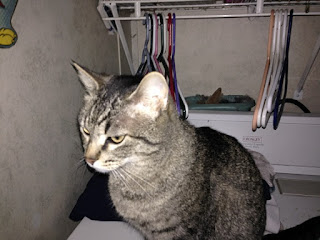 This Murray cat has been a mess for the last three days. In that time I have received gifts. Gifts I don't really want, but thanks anyway Murray. She brought a lizard in the house about ten days ago and it got away from her. I suspect it is dead under the china hutch where it fled. I haven't seen it since!
No gifts for a few days, thankfully. Then she shows up three days ago with another lizard that got away from her. I found one dead on the kitchen floor. I'm uncertain if that is the one that got away from her or if that was another lizard all together.
I have the front door open today to let the breeze in.....air out the house a bit. I was sitting here at my computer, reading, when I hear that cat coming down the hallway making noises I know mean, "Looky what I got!"  That one got away from her too! It went under the bookshelf behind my desk. I went after it! It came out from under the shelf and I caught him and put him outside under the porch. Murray was still in the deskroom trying to locate the lizard under the shelf! That one wasn't too much the worse for wear other than he'd shed his tail on his flight from the cat. I'm pretty sure he'll live to see another day. 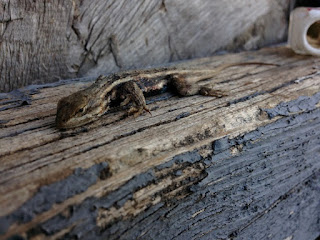 A couple hours later, here she comes again!  I'm sitting here in front of my computer, minding my own business. Murry's hurrying down the hall yelling, "Looky what I got!" That one got away from her too! I coaxed him out from behind the shelf where he promptly ran right past the cat, down the hallway with the cat right on his tail, and into the cutting room. (Room of Many Abysses!) Murry got confused about where he'd gone. She was headed back down the hall from the way he came. I followed him into the cutting room where he promptly disappeared.
I thought he was gone forever. Then Murray was hollering that "Looky" noise and she's got him in her mouth. I made her give him to me. She didn't want to but she dropped him. He's pretty beat up. That's him in the picture above, sitting on the porch railing, out of reach of the cat. I don't think he will make it.
These little lizards are, apparently, quite abundant this year. They're pretty little things. I think they are skinks. They have blue patches on their undersides up by their front legs and along the side of their necks. The biggest of the three I've seen in the last few days was not much more than 4 inches and he got about half as long as he was once he gave up his tail for his life. That tail will grow back so no worry. 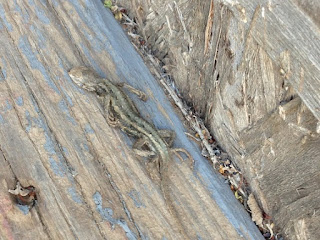 This is the little fella I found dead on the kitchen floor. I have a natural history collection going and this guy is sitting on the porch railing, in the corner where lots of air movement happens. He's mummifying.
In addition to all these lizards, Murray has gifted me two little mice also. She doesn't announce the arrival of mice like she does with the lizards. She's right proud of those lizards! I really wish she would keep the darn critters out doors where she finds them.

As I said, I had the door open to let the breeze in. 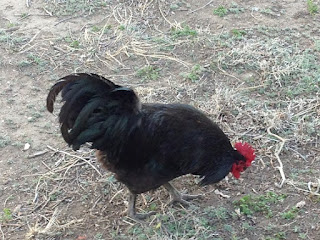 Eric brought his harem over this afternoon to see if there were any scraps to be had outside the front door. 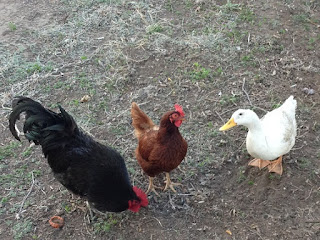 Eric and his harem of 2.
There were no scraps outside the front door. The scraps were outside the back door where I threw them yesterday. 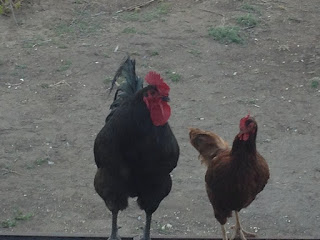 I do not trust Eric any farther than I can throw him. I cannot throw him at all cause he'd never let me get close enough to get ahold of him! He and Henrietta decided they were going to come up on the front porch. I didn't think chickens would climb steps but I have been schooled that they do indeed climb steps! I stomped my foot on the porch trying to get him to go back down the steps before he got all the way up them. That only made him come one step higher. Every step up he went, Henrietta went as well.
They were on the top step of the stairs when I took this picture. I shut the door behind as I went inside.
I don't want that rooster on my porch. And I sure as hell don't want him in the house. He's tried to attack me in the yard. I can only imagine the havoc he'd wreck in the house! I don't care if he roams the yard. He can have the yard. I'll give him all the space he needs, but the porch is mine!
I know he doesn't like the umbrella so I took it out of the umbrella stand by the front door, opened it up and went back on the porch to scare him off. Henrietta took off running like Wyle E. Coyote was hot on her tail. Daisy Duck took suit and followed after Henrietta. Eric stood his ground atop the stairs and just looked at me. I turned the umbrella upside down and sat it at the top of the steps. He flew down the four steps to the ground and crowed like he was just mortified I would dare not let him on the porch.
I don't like that rooster so much at close quarters! I left the umbrella at the top of the stairs and Eric joined his girls in the back yard. 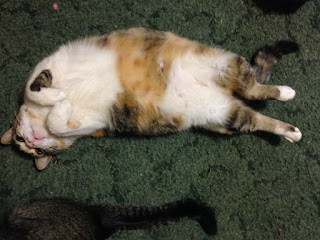 And Miss Lola Cat could have cared less about all the animal drama happening around her. That cat needs to go on a diet.
Murray had laid down next to Lola and was telling her all about her finds of the day.

Never a dull moment at my house with all these critters to entertain me!

OK---on with what little I have to show in the art department: 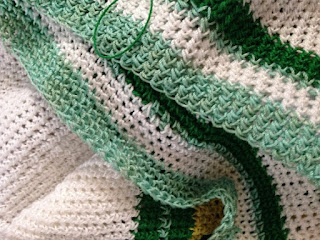 This is the crochet project I talked about in the last post. It will still be a few days before it is finished. That is all crochet cotton thread. It has taken awhile to do all that crocheting! You'll get to see this again probably in the next post. Hopefully it will be done soon. 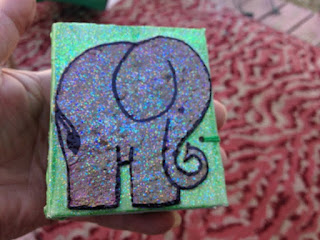 This is the elephant I showed you all last post. I said I didn't know what had happened to the book....well, the book wasn't actually a book yet when I said that. I'm getting senile in my old age apparently. It was in the bag with the rest of the little books that need to be sewn together. 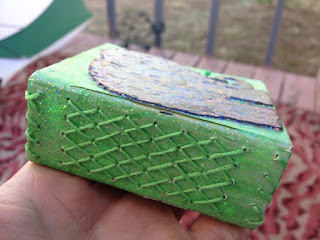 It is made from a jello pudding box. I learned a new way to do a decorative stitched binding. I love how it turned out! I don't usually put that many holes in such a little book but I do like how it turned out. I probably should have used a different color of embroidery thread to do the binding. I didn't realize just how closely the thread matches the color of the spine. And the stitching along the ends of the spine? That was a total goof up! I tried to fix that goof up by putting a line of stitching across the top and bottom edge. 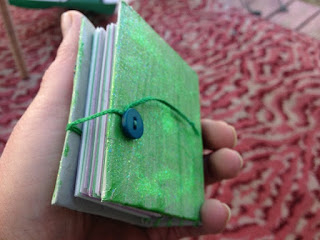 It didn't want to stay closed on its own so I sewed a button to the back cover and put a braided string on the front cover. Wrap the string around the button and it stays closed nicely. This book is roughly 3.5 inches tall, 2.5 inches wide. Somewhere around there.

That's about the extent of my arting endeavors since the last post. I did paint a couple of those book covers I showed you all last post but they are nowhere near ready to show off.

I leave you with a clear blue sky this second day of April, 2016!
I've no idea what will happen with the north field this year. It is the time of year when I should be paying attention to see what the farmer decides. 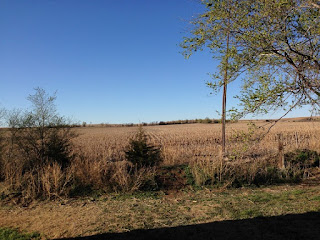 Ha! Your critter's are too funny! I was thinking the "Sesame Street" thought with the pic of the rooster, hen and duck..."One of these things is not like the others..." LOL! Cute pic of Lola? The cat that was lying on it's back. :)

Is the first knitted project going to be a blanket? The new book binding is gorgeous!