It's 4 o'clock in the morning. I've been awake since 1:30 when Murray Cat decided it was high time I got my hide out of that bed and fed her. Course, it WAS high time to get out of that bed, I fell asleep yesterday evening around 6.
So here I sit in the wee hours taking stock of what the heck I've done all month.

Better get a cuppa something and settle down for a spell. I've been busy, as usual.

The kids came for an overnight visit this past Friday into Saturday. RJ and Terah went to Hays for the night to celebrate their anniversary. (Hays is about 40 miles south) Annie spent the night with me and we played with paper and glue on the coffee table in the livingroom. I have no pictures of this endeavor unfortunately. It was a gluing good time! I added pages and pages to my glue book and did away with six or seven magazines in the process. Annie glued something on every page in the 20 page notebook I gave her to use as a glue book. We played with stickers as well. Her daddy gave me the 'eye' when he realized I had given the girl a big ziplock baggie full to the brim with stickers! (And didn't put a dent in my sticker stash...) We had bacon and eggs with toast for supper on Friday and then again for breakfast on Saturday. That little girl would live on eggs if you let her. Eggs are easy! She likes hers 'runny'--or as the rest of us would say--over easy.
This was the first time in her six years that she has ever spent the night alone with me. It went very well. I only wish she hadn't woke up when I came back from the bathroom at 6 on Saturday morning. It was almost 11 when she finally went to sleep. She wore me out while she was here! It was a great wearing out though! They went home early Saturday afternoon.

I've seen my other boy a couple times this month also. He's gone back to work in the oil patch so he's a happy camper. RW is a flighty man. He pops in and out at all hours of the day and night. I never know when he's going to show up, but I'm always glad to see the boy. He'll be getting off work here in a couple hours. I may yet see him today.

Eric the rooster is gone. He was tasty. Henrietta is a bit confused with him gone. She doesn't seem to know who to follow. Daisy the duck and Henrietta the hen stick close like they always have but Eric was the leader of that pack. Now Daisy and Henrietta are hanging out with a bunch of young white ducks that look like Daisy. The flock now containing Daisy, Henrietta and five nameless ducks. I suspect they will in time get names. They were just fluffy yellow ducklings a few short weeks ago.

Soon there will be a great flock of fowl fettering around the yard in search of grasshoppers and other bugs. Brother Sammy has four or five more ducklings that are growing and 11 more chickens that aren't quite big enough to give run of the yard just yet. I have no pictures of the little birds. Or the ones running the yard with Henrietta and Daisy. Sooner or later they will all figure out who is the boss and life will continue on. I'm looking forward to the days when the little hens start laying. I will get fresh eggs frequently.

RW, my youngest son, had 11 laying hens. They layed all through the winter. Most hens slow down on laying when winter rolls around. RW was doing something right. The boy had more eggs than he knew what to do with! He brought me fresh eggs almost every week. He's down to three hens that are laying now. He lost all his layers to a hunting dog that showed up and decided killing chickens would be great fun! RW was fit to be tied! The fella came and got his dog and paid RW for those dead chickens. RW bought himself some baby chicks and a few ducklings to replace the dead ones. The boy cracks me up! I don't know what he traded my brother for, but Sammy ended up with 3 little black ducklings from RW. He needed something or other and Sammy had it.

It has been quite rainy for the past few days. My old body has been in rebel mode and I've totally screwed up the sleep patterns again.  That means art happens mostly while the rest of the world is asleep.

It has been about 20 days or so since I was here last so there is a lot that has been accomplished. Let's get on with it!

I made another zine. I've yet to do a first printing. It's on some odd sized paper, not even sure I can print it and get it to come out right. I wrote all the haiku. I have written hundreds of haiku over the years. 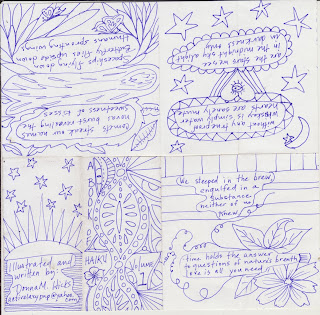 I put together some books... 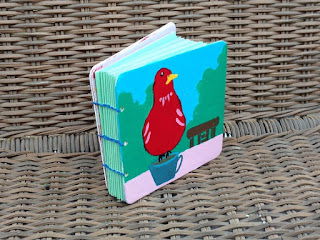 This one is 4x4 inches, made from paperboard beer coasters that are painted in acrylics. I did the paintings on this one five or six years ago. It is sewn together with waxed embroidery thread in the copic stitch. One inside of each cover is an envelope pocket made from envelopes from the stationary 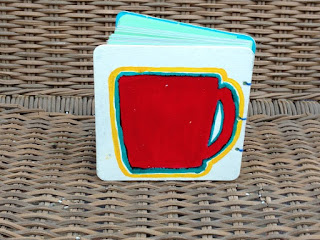 paper the pages were cut from. This is the backside. It has quite a few pages--9 signatures of 5-- so around 90 pages. I got the stationary, 5 different colors of it, at the thrift store in Hutchinson. I used green and purple for this red bird book. 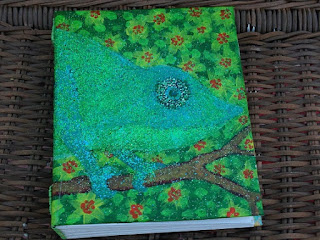 This one is made from a frozen veggie box. I painted it in acrylics and glitter paint. It measures 6x5 inches and is about an inch and a quarter thick. 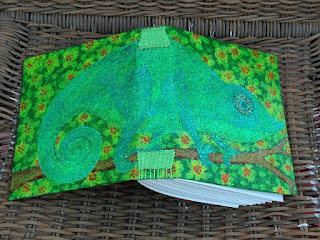 I sewed it together with thin cotton cordage in the long stitch. The spine is woven. It has 9 signatures of 6 pages, giving it roughly 100 pages in total.
I really like painting on the box books. Ready made book covers from boxes! I love simplicity! 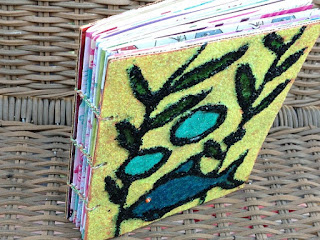 This one is made from corrugated cardboard from a box of some sort. I painted it with various layers and then made the fish design in glue and glitter. The book measures 5x4 inches or so. It has various types of paper in it. Mostly scrap book paper, map paper and sheet music. It's sewn with waxed baker's twine in the copic stitch. It has about 90 pages total. It isn't one of my favorites. All that glitter makes it a very rough book to touch. I varnished it well so it doesn't shed glitter but it isn't a fun book to hold. 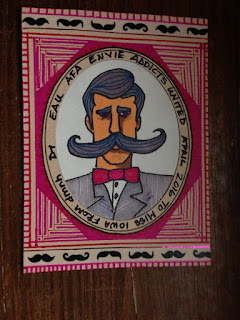 This is the postcard I sent to my monthly partner over at AFA in the Envie Group. He's done on an antique paperboard photo frame. I drew him on drawing paper and colored him with markers before inserting him between the two halves of the frame. The frame was then embellished with washi tape, striping tape and markers. He was well received! 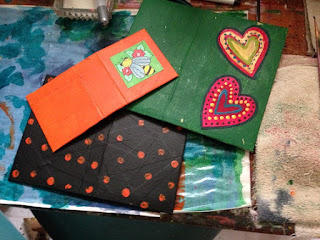 Three box book covers in the making. The top two are pretty much ready for paper to be cut. The one on the bottom needs some  more work. The hearts are fingernail polish painted on watercolor paper that I did back in 2014. The bee drawing is markers on cardstock. It is a twinchie. (2 inches square) 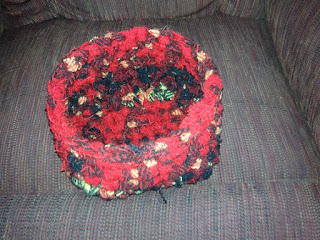 I cut a piece of tartan plaid wool into yarn and crocheted this little basket. It measures about 6 inches across and three inches deep. I still have a large piece of this plaid material but I won't be turning it into fabric yarn. I believe some plaid monsters will come into being from it instead. It crocheted up nicely, worked great for yarn, but it will sew even nicer! 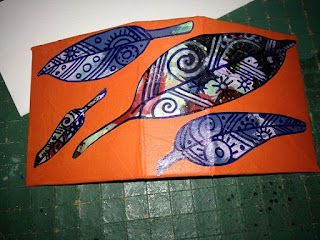 You all know about the painted newspapers that accumulate from my painting at the kitchen table. I turned some remnants into feathers. Or leaves, if you like. I was going for feathers, but some of them do look like leaves! This is a box book, a jello pudding box to begin with. 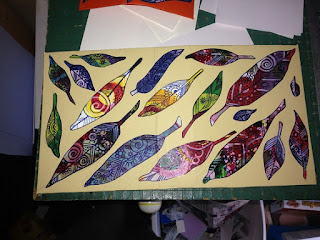 I made a LOT of feathers! Another box book cover. This one a frozen veggie box. I attempted to cut book pages the night before last, but that wasn't going to well. My old brain mucked up the first measurements and I cut the pages wrong so I gave up cutting book pages at that time before I mucked up too many times. I'll give cutting another try perhaps later today. I do have a few book covers needing a page block! 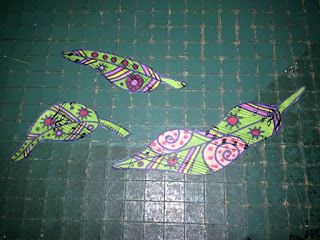 These three are not painted newspaper like the rest of the feathers. These are drawn on sheet music with markers. 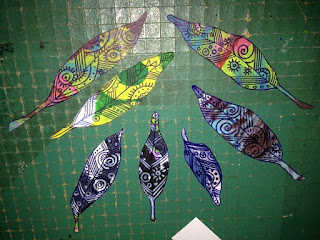 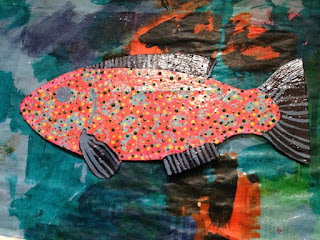 I've painted a couple of fish. This one still needs his eye completed before I can say it is done. 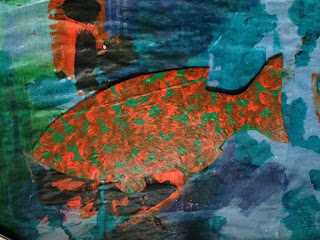 And this one just needs to be done!  I have a stack of these fishes all cut and ready for painting. They are cut from chipboard boxes, think cereal and such, and then painted with wall paint before the acrylic goes on. 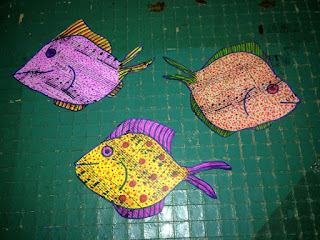 And apparently the muse was fascinated with fishes because yesterday I did these spotty fellows on sheet music with markers while I sat here in front of my PC watching Dancing With The Stars reruns. 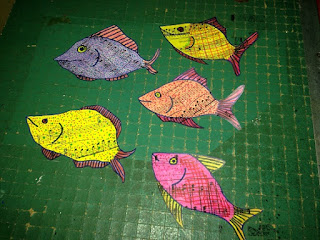 A couple of these were done the day before the day before yesterday. And there are two more that have materialized since I took pictures of these guys! They are all done on sheet music from the early 1900s. 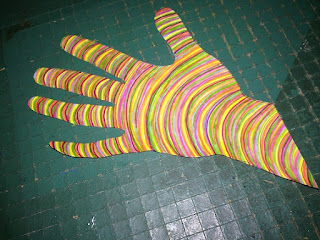 On Saturday after the kids went home, I sat here in front of the PC catching up on my television viewing, making this striped hand on copy paper. It's an outline of my hand. It is going to end up in my glue book. I'll show you all the glue book some day. I really wish I knew where the first glue book I did is. I have no idea where I put the thing! It still has empty pages to fill too..... 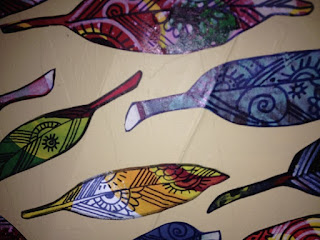 Here's a close up of the feathers/leaves, whatever you want to call them.

I've worked on the Kitty Book a bit. No progress to show you though.

I've made four envelopes to send things in. I'll show you all those next time.

I drew three tiny chickens on drawing paper with markers. I forgot to take a picture of those.

I did two marker drawings on 5x7 inch paper. I forgot to take a picture.

I have not finished the crochet project I showed you all last post. Haven't even picked it up since then.

I have cut seven fabric yarn balls out of garments.

I made a pan of peanut butter cookie bars. They were very very yummy! I will be making those again!

I guess that's all I got today! Thanks for hanging on till the end!

tee hee! Love my Winging Mustache Man! He's watching me right now. :) And I love that little bird book made out of coasters! I have a bunch of that size coasters, I've just never done that kind of stitching to make a book out of them. Fabulous work, sister!