A Bit of Art, A Trip to Nickerson and Me Rambling on About it All

There isn't as much art as I usually show you cause art wasn't on the forefront of my latest adventure. Do enjoy what I have to show!
I'll ramble on about the trip after art.... 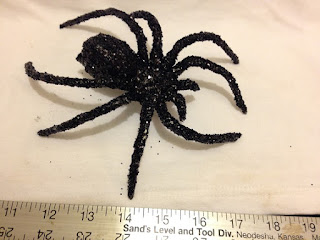 Mr. Spider has come a ways since you all saw him last. I put the black glitter all over him before I headed to my son's house. I've been home for four days now and I haven't done much of anything to him except add some brown fingernail polish to his thorax. He will make another appearance here on the blog before too much time passes. 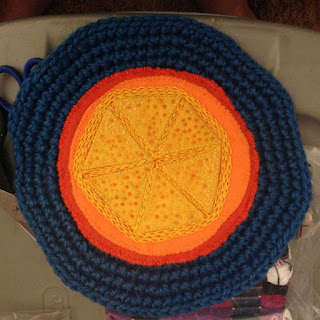 I was very busy with other things the 12 days I was gone. I took enough stuff with me to keep me quite busy with making something or another but if truth be known, I didn't dig any of that stuff out until the last two days of my trip. This is the only thing I have photographed that got done at RJs house. I crocheted the blue backing a couple months ago. The abstract citrus is embroidered felt. It measures about 10 inches across. I call it a hot pot mat. My daughter in law Terah, says it looks more like pizza than oranges. 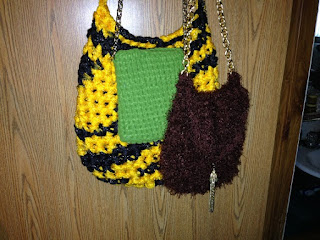 These are the three bags I have crocheted in the last two days. I have another small bag similar to these that is about done that I started yesterday. It will be done before the day is out!
The yellow bag is made from some very thick, soft yarn I acquired on my trip. The green bag is made from some ribbon like yarn, and the brown one is made from thick fuzzy yarn. The brown one has a gold metal necklace tassel to keep its flap closed. Both green and brown bags have reclaimed chain for the handle. Not sure if that chain came from belts or purse handles. I got it from my sister on this last trip.
I spent two days at her house during the trip. We had a yard sale. I took a couple boxes of my junk with me to try to hawk at her sale. I came home $42 richer and minus some useless stuff, so I was a happy camper about that. One guy paid me his $8 total in gold coins. Not sure what those gold dollar coins are referred to as. I  happy to take them off his hands. Coins fascinate me and these are some I don't see often. I won't spend them. They will go with the rest of my stash of coins.
I did bring home a rather heavy, large box of art fodder from Sis also.

All the drawings that follow were done a couple days before I left to go to Nickerson. All are done in markers.  And none of them are larger than 3 x 4 inches except the palm tree and the blue dog. 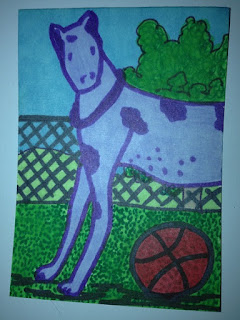 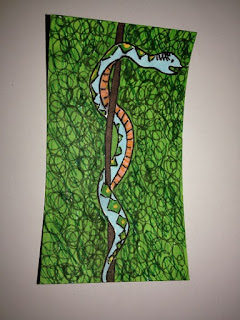 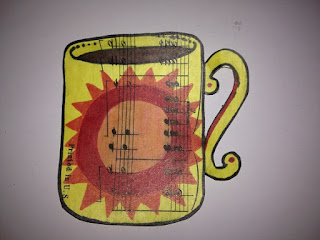 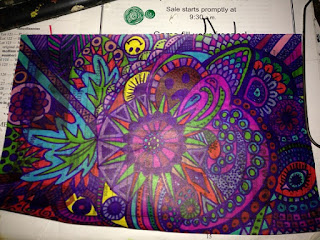 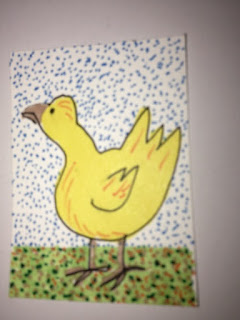 Terrible picture, sorry!
I called this a duck but looking at it now I see it has chicken feet so we'll have to change that duck to
Chicken 2x2 inches on drawing paper. I'm not certain it is actually 2x2 but its close. I just cut these papers from my little papers stash, I didn't measure. 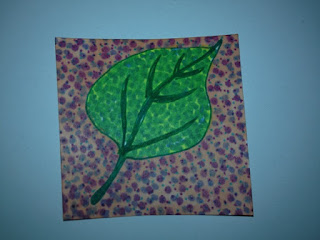 leaf, same size as the Chicken 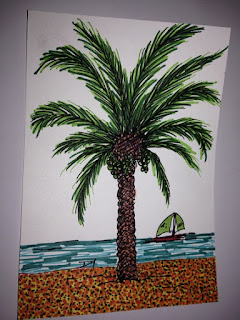 You all saw this one last post with no color on it. Palm Tree markers on cardstock 4x6 inches

I found a tutorial teaching one how to draw strings with the over and unders correctly. 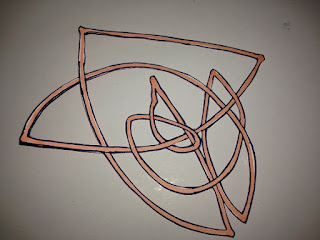 I don't know that I got it correct but I gave it several tries. 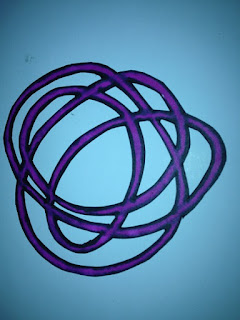 These would all fit within a 4 inch square. They are done in markers on drawing paper. 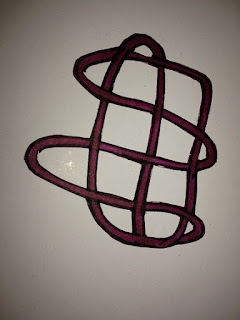 And then I cut them out with the xacto knife. 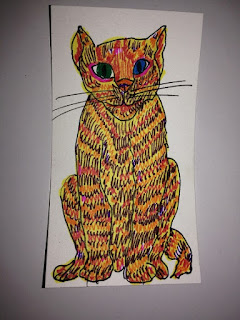 All of these drawings were drawn and colored within hours of one another except the coffee mug and the palm tree. They were done a week or so before the rest. I colored them with this batch. 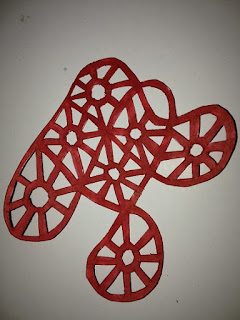 And I tried my hand at this. Just shapes on drawing paper with marker. I then cut it out with the exacto knife too. I think the strings will end up in my glue book.

I took my glue book apart last night. It is in a composition notebook. Composition notebooks are sewn down the center of the book and that thread will come right out of there if you start at the right end. It was a bit like opening a bag of dog food to get that string out of there. So now my glue book is out its cover, which it was outgrowing anyway, and into 8 signatures that will be sewn back together and put back in the Composition notebook where the pages will once again fit nicely.
Gee, just what I needed. Another project! LOL

That's about all there is to the art part of this entertainment. I did finish the pink and black paper basket. I took pictures of it but the camera refused to download them to my pc. I'll give that another shot when I get something else done that needs to be photographed.

No one ran off and left me to my own devices while I was away is the reason nothing got done in the art department in 12 days time. Only 2 things finished and both were worked on the last two days I was there. And at the last moment of the last night there, Annie wanted me to make her and Bailey a braiding  disk. Those two little girls were headed to bed and I was leaving first thing in the morning. Long before they would be awake. I don't know if the effort put forth with the braiding disks was successful only on my end of the deal or if the girls finished the braids I had started on each of the disks. None the less it pleased me greatly that she needed a braiding disk, let alone two of them! I will have to ask the son if she finished the braiding.
Annie and I played with the rainbow loom and the rubber bands (which I call rubbers. I see no reason to add bands. I have always called them rubbers. It sometimes confuses people when I do that, not thinking beyond what I know. So here I will call them properly!) We made a couple bracelets and I added about six inches to my fishtail string. It's maybe 12 feet long. I've never measured it. I really don't know what else to do with the 10000 rubber bands I bought for that rainbow loom other than turn them into a giant long string.  I'm sure I'll show you the rubber string sometime or another. Annie dragged it out from the sofa where I sitting, across the room and down the hall passed the bathroom door. I'm totally guessing that that is about 12 feet. She thought it was pretty neat. She only plays with her rainbow loom when I come around. Rainbow loom lasted a few hours and we neither one touched our loom the rest of the visit.

These folks wore my hide out! We went here and there and everywhere!
I have no pictures from the fourth to share. That's not to say I didn't take any...oh there were many many many terrible shots of fireworks! But we won't see any of them today. 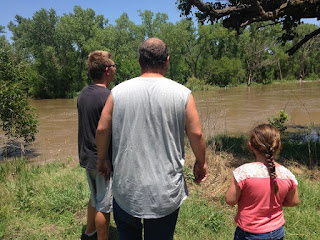 On the 5th of July...I think...it rained like 6 inches in twelve hours of time. It rained like a cow peeing on a flat rock early that morning before the sun was up and still raining come noon. The later that evening the deluge came again. This time with tornados along for the ride! Luckily I only heard about the tornadoes, I didn't see any. It again rained like a cow peeing on a flat rock for a few hours. The river came out of its banks! This picture of RJ and the younguns was taken on the 8th I think?  The Arkansas has been not but a small brook running down the middle of the riverbed for quite some time! All this water is wonderful, but not so good when it comes all at once! 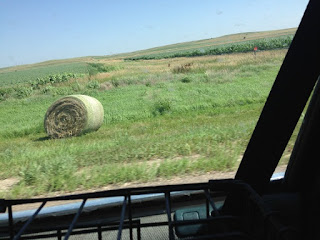 On the way home driving the Old Blue Beast with Fluffy Frank in tow, we discovered cow chow everywhere! 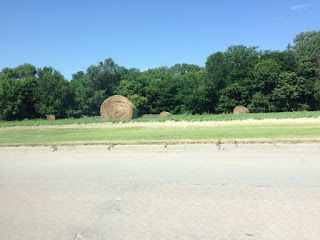 Hay bales. Wheat biscuits. Cow Chow.
I can't tell you where these pictures were taken. I took the usual route home other than skipping the short cut because of potential flooding upstream. Might be the road between Luray and Osborne. Or it might be between Lucas and Luray. 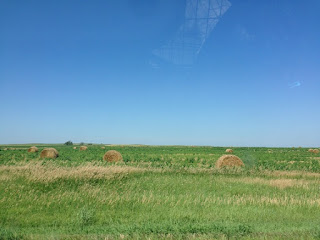 And some more cow chow sitting out under a clear blue sky! bbbb
I am thankful for air conditioning in a car that the windows will not roll down in! 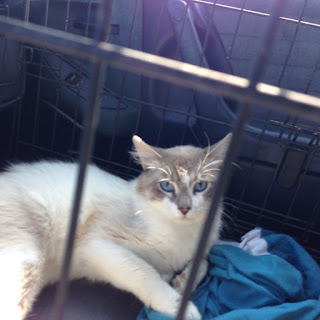 Fluffy Frank was ready for this trip to end and at this point had only gotten started! 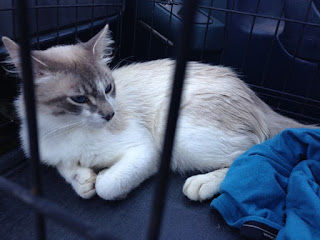 His name was Fluffy when I put him in the car. It still is his name when Annie comes to visit, but I call him Frank. He has some beautiful blue eyes! 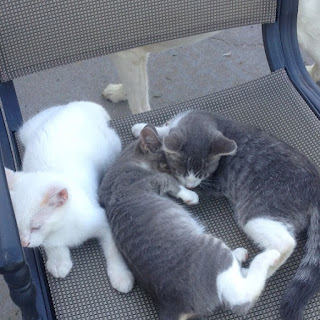 It took everything in me to not bring one of these little guys home with me and Frank. 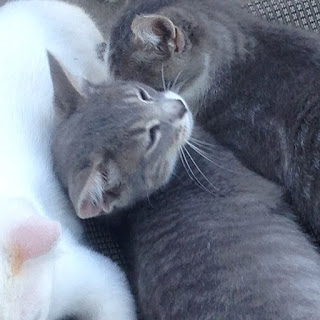 There are four of these little guys. Two girls, two boys. Not sure where the other white one was at this time. I love kittens!!! Who doesn't love kittens???
Annie had a meltdown upon my departure. She knew Fluffy was going home with me. I had him fixed five days before I came home! She was cool with Fluffy going home with me until I woke her up to say goodbye. She gave Fluffy some lovins , crying the whole time....I gave her hugs and told her I'd take good care of him. He's settled in quite nicely and no one has beaten him up.
Ma says we have to fatten the boy up! He is skinny compared to Murray and Lola. Everycat is skinny compared to Lola though.... He's a nice boy. I think we'll keep him. The girls will learn to love him. 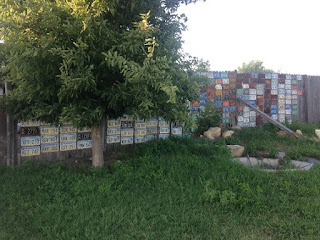 My fence with all the license plates attached. It has nothing to do with this post at all. I showed it someone and realized I hadn't shown it to the blog. Well there you are, a fence of license plates.

On my drive home I had a minor emergency which required stopping the car to ensure a major emergency did not occur. Mission accomplished! I'm still here to finish the story. 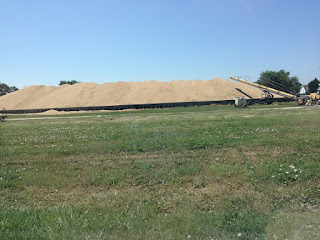 Almost every morning there is a brief airshow at my son's house. 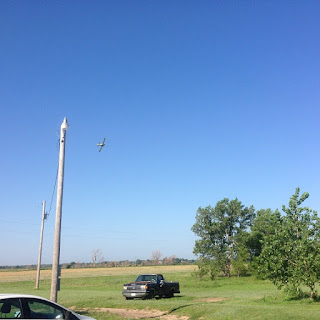 The man who flies this little yellow machine lives around the corner....about three fourths of a mile as the crow flies. He takes his plane for a short run and turns around above the field across the road from son's house. 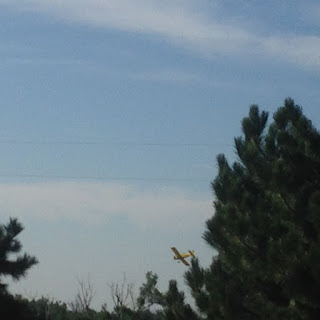 He basically makes a circle from his airfield and turns around half a mile from where he started. 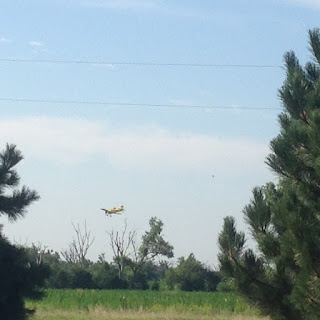 there he's headed back home.  It's a crop duster plane. 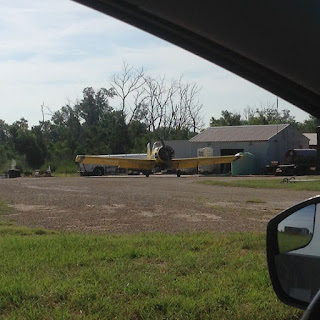 Me and RJ were making yet another run into Hutch as he was flying over the house so we drove by the airfield on our way to town. Which we would have done even if he hadn't been out that morning. It cool to see. I saw the air show, as I call the morning flybys, three times while there. He usually made only one pass by the house. The morning I got these pictures, he flew by three times in a row. When we went by the airfield he was working in the engine. I hope he got it fixed good.

That's it for today. I have another blog post to write before calling it a day so....
Remember to be good to one another!
It matters!
Peace
831

Holey smack, you were busy! Sounds like you had a really good time! Frank is a handsome dude...and I love your fence!! :)