I've not been very artistic this past week. Fibro has kicked me very hard! I've laid in my bed, reading for hours on end for the last three days, sleeping when I wasn't reading. The three days previous I rode around in my brother's truck getting bounced around on chalk roads (having myself a fine time, at the time!)
Fibro set in and I went down. Art shut down on Sunday and has yet to return. The want to is there, but it isn't very strong. Art supposedly heals pain...it doesn't if you hurt too much to sit in a chair and actually do art. There is an upside though. I can add another book to my books read list.
It was an excellent murder mystery. I thought I had it all figured out last night when I was about 3/4 through the book but when I finished it this morning, I was way off on my assumtions.
I feel pretty good tonight. I still hurt like crazy but not so much I can't sit in this chair for a bit and get caught up on this blog. I probably won't get caught up on anything else though. It's a quarter after midnight and I will probably have to drive my sister to Salina sometime tomorrow morning. I'm not sure she's even going to want to go to that doctor's appt tomorrow...
I need to get caught up though so.... I've some art to show that was done before the muse flew south.
There was an ATART (all types of art a thon) over the weekend. I managed 5 ATCs for that wing ding. Traded two of them. 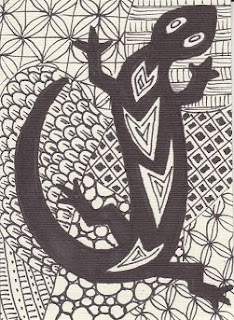 Zen Lizard
ATC
21 May 2010
Black Sharpie on recycled cardstock.
This is one of the traded. 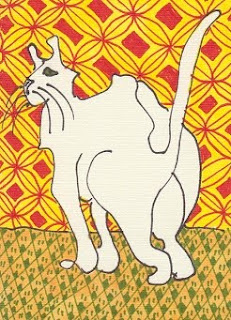 Zen Cat
ATC
21 May 2010
Markers on recycled cardstock.
This is the other one traded. 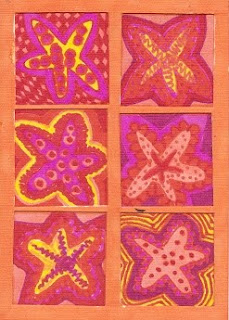 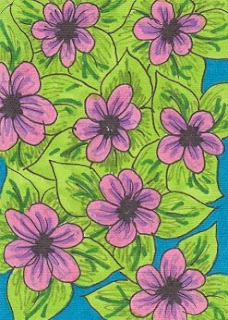 Pink Flowers
ATC
21 May 2010
Markers on recycled cardstock.
I worked some on the fish picture as well. This fish picture is giving me fits. I think about coral daily. I think about how to replicate it to work it into this creation. It has been daunting.
Progress is happening though. I have crocheted some fishing line into little disks that resemble coral. Well to me it looks like what coral MIGHT look like....I've never actually seen live coral of any kind and the stuff I've crocheted really doesn't look like any picture of any coral I've seen either but I think it will work.
The muse hasn't been cooperative as I said. As you can tell I've not gotten much farther on the sea floor. I'm trying to accomplish the effect that viewer is looking out from inside the sea cave. Much work is still to be done on this piece.
The fishes were the easy part! 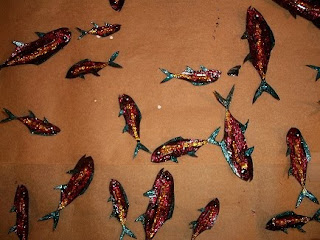 Sorry it isn't a great picture. They now have some color and eyes.
Pictures were not going into the post correctly tonight. Probably operator error but it wasn't working like it usually does. So here's another of the ATCs done over the past weekend. 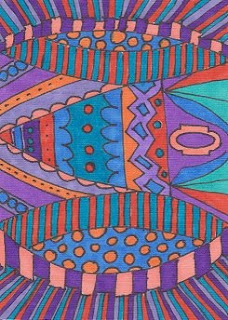 2 Ring Circus
ATC
Markers on recycled cardstock.
If I felt better, I'd show you some of the 595 pictures I downloaded from the camera today. I can't sit in this chair much longer for two reasons; 1). My back and hips are killing me! and 2). I can't keep my eyes open much longer. Perhaps in the next post (whenever that may be) I'll show you some scenery.
Get your hugs! I'm collecting them too!
Peace
831
Posted by Donna at 12:37 AM