keys, flames of tape, an update, coffee and perhaps a bit of chatter---

I've been arting!
I made these keys shortly before Christmas. The dog magnet is my personal favorite. It now hangs on my refrigerator. I gave a bunch of these to my family for Christmas. 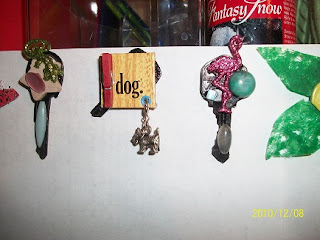 Each of them has a key with the magnet attached to it. You can't see the key on a few of them, but it's there.
flamingo is a button. the gemstones are polished stones of varying varieties. dog is a charm, dog tile is from a Scrabble Sentence game. little wooden clothespin.
I had fun acquiring the magnets. I went out to the burnt house and got a basketful of Brook clip magnets and took them to the garage. I stuck them to the vise by the magnet on the backside and whacked em with the hammer. The biggest damn hammer I could find! One or two whacks was all it took and that magnet popped right out of there! Some of the clips had more than one magnet. I crushed a few of the first magnets cause I was a little heavy handed with the hammer. Didn't know I was that strong! lol....I smashed, in two sessions, round about 60 magents. Still have a case and half at least. That's about 750 of them. No need to go buy magnets for the keys with a supply of strong little magnets just sitting there hold one another together in that box. Have you priced magnets lately? 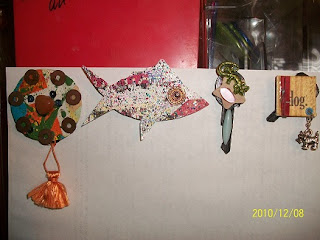 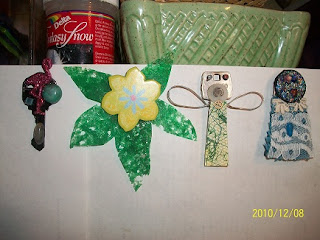 flower is printed heavy chipboard, leaves are ironed easter grass....tiny gears from an electronic of some kind, copper wire, fabric paper...this one hangs on my fridge too.
blue one is a wooden disk with gemstones and glitter paint with fabric for her dress, bit of lace and another gemstone. 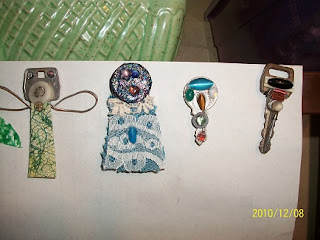 the other two just have gemstones... 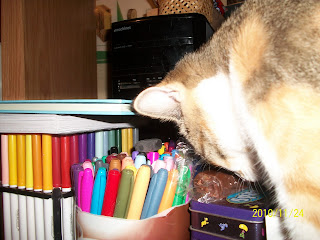 Lola being nosey. She's after that swiss roll there by the markers.
This cat was a holy terror a few nights ago!
She goes a bit stir crazy when she can't go outside for a few days. It snowed. Snowed a bit...four - five inches or so. It was cold! COLD! She didn't need to be outside.
She made a mess of a cup of pens, pencils and things of that nature by trying to jump up on a skinny little shelf. Pens, cup ...all on the floor, scattered! Then later she dragged out a bunch of ribbons and such out the drawer I left open a few inches....holy terror!
She did get a bite or two of that swiss roll. She's got a sweet tooth. 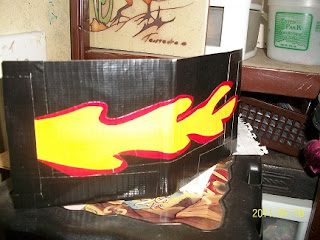 I made this duct tape wallet since the last post. It was surprisingly easy to make! Took me about an hour, maybe! I always forget to look at the clock when I start a project. I get halfway through it and wonder how long I've been at it...didn't take terribly long though.
I gave it to my nephew. He was thrilled with it. Especially the flames!
On the to-do list is a wallet made from the printed circut boards from keyboards. Should be interesting. Nephew thought the idea very cool!
I did a bit of drawing today. I got up at 4 am, made coffee in my new coffe pot for the first time and got busy making the charm on the chunky book down the line here. Then I drew the pictures. All day I've been drawing when I haven't been driving down the road or eating or playing a game or two of collapse.
The muse was PRESENT! 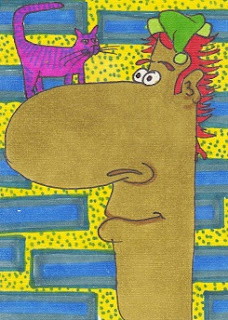 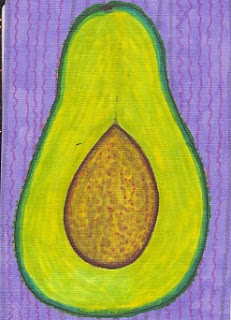 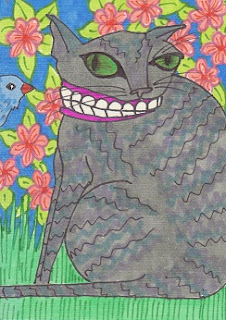 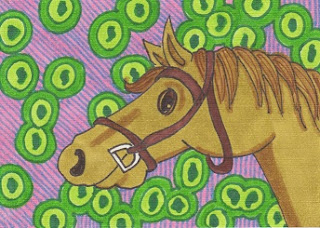 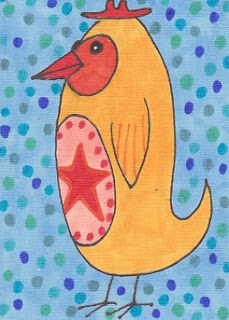 Red Hat Bird #2
ATC
markers on cardstock
This was the first ATC of the morning. I was putting black marker  along the edge of the card of #1 and the marker slipped off the edge and put a black streak across #1's beak....dang! had to redraw this orange guy so he could journey to Finland along with his damaged twin. The first guy was much cuter in my thinking. 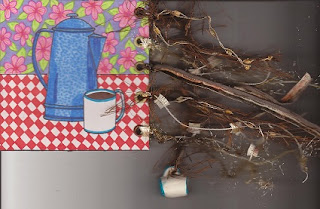 The little cup at the end of the string is made of polymer clay and the blue is marker. I made a fish along with the cup while my morning coffee was brewing and drew out the picture while they were baking. This is a chunky page, 4x4 inches.
I haven't taken a picture of the fish as of yet. It needs painted before it's finished.
I broke my crop-a-dile a week or so ago. I should have known better than to think it would ACTUALLY punch a hole in the handle of that spoon. I gave it all I had and the spoon went one way while the chunk of pot metal from the tool went another. Brother glued it back together with JB Weld and let it set for three or four days. I used it on this chunky page this morning to punch those holes for the rivets. I won't be trying to punch holes in spoons anytime soon with it, but it works great still on chipboard.
That crop-a-dile would have been a much sturdier tool had it been made of steel instead of potmetal. Granted, it's pretty strong and it does have its limits, but it would have handled that spoon handle easily had the body of the tool been made of steel...like pliers and hammers .....it was a mighty pricey tool to be made from potmetal.
I was in a funk last week. I was arting, just not functioning any other way. It was sad. I'm glad it's gone on its merry way cause I couldn't take that much 'joy' on a daily basis for long!  I just did not have a lick of energy and I did not give a shit. Plain and simple. I did a lot of paper folding while watching every episode of Chicago Hope that hulu would let me watch! I think there were like 26 of them...I watched a couple lifetime movies too. I folded hundreds and hundreds and hundreds of magazine papers cut to 2x4.5 inches to make paper chains. I learned how to sew them together to make containers. I have no pictures yet. I'll do show and tell soon though.
The water pipes froze on Friday afternoon and didn't thaw till Sunday afternoon. That debaucle didn't help my frame of mind at all. There was a thick blanket of snow on the ground. It's only a thin, patchy layer now!
That snow did little to change the art bundle I hung out in the pear tree. The twine seems to be holding up fine. Course it's only been out there since the 6th I think. It got wet...it rained last night again. The pages in the bundle that are exposed don't seem too affected with it as of yet. Next week I'll take a picture of it.
And I'll do another show and tell.
In the mean time....you all be good to one another. Flash those smiles! Give out some hugs, collect a few.
Keep it real. Keep it simple.
Peace, my friends
831
Posted by Donna at 9:25 PM