Another Little Book and More Monsters

I've not been real busy with arty things since the last post.
Kansas fell into HELL the last nine or ten days. Temperatures were well into the 100F degree range and it was quite miserable without any air conditioning. A/C is now fixed so artwork commenced. 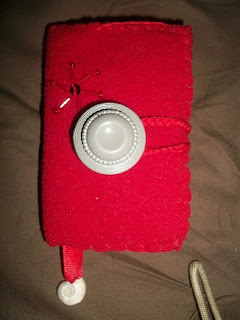 I made this little book and the cover for it yesterday.
Pictures are screwed around but you get the idea. 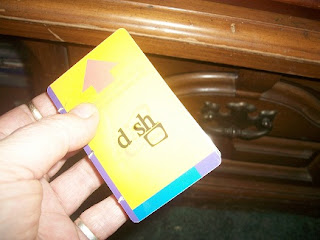 I used two plastic credit card-like cards for the covers. These two happen to be dish network cards. Not sure what they call the cards...these came out of dish network equipment that my brother junked.
I used the needle tool to poke the holes in the cards to sew them to the page block which consists of paper that came out of a kit of some sort for making greeting cards. The papers I used were 'practice sheets' for getting the printer to print on the paper where you wanted your design to go. I think I used the cards that came in this kit for mailing out art trades, not sure really where this paper came from!
One loses track of where all their crap comes from when one has as much crap as I do! 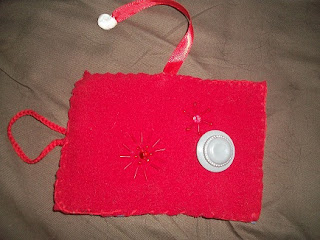 I didn't do any measuring with a ruler. I just eyeballed the size of felt I'd need for the cover. That red material isn't felt. It is part of an old fleece shirt I used to wear! The beading (which is hard to see in the picture) was already on the fleece when I decided to use it for a book cover.
I blanket stitched the gray felt to the red fleece with embroidery thread. The tie is braided embroidery thread sewn into the cover. The button is plastic but it's a nice button for being made out plastic! And it worked great cause it's gray! The bookmark is a length of satin ribbon sewn into the cover. I glued a freshwater snail shell to the end of the ribbon but that snail is not there now. Should have left well enough alone cause I was messing with it and broke the shell! It's OK though, I have about 300 of those little shells that my grandsons brought me from the lake so I'll put another shell on the end of the ribbon and it will look just the same. 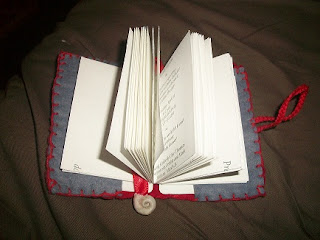 Once the page block was sewn to the covers and the felt cover was done, I just slipped the plastic cards into the pockets on the felt cover and voila! a new book is born!
This little book will be used to record my blood sugars everyday.
It has 30 pages. Only 8 of those pages look like the one you see in the picture above with writing all over it. They are all blank on one side though.
Recording blood sugars is a necessity, but keeping those records on pristine paper is just a stupid idea to me. Why not reuse other papers when all I'm going to do when the book is full, is throw it away?
It isn't me that thinks those things need to be recorded anyway. It's the doctor who wants to see what the numbers are looking like. My A1Cs are always fine so I don't know why she thinks I even have diabetes! I play along though cause if I don't play along, she gets upset with me. My blood sugars are the very least of my worries where my health is concerned! 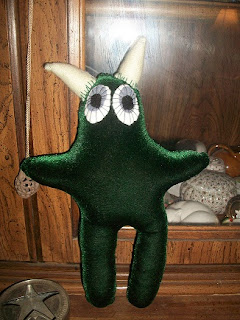 But anyway....
And then there were monsters.
This one is made from dark green velvet (used to be a little girl's party dress) and cashmere sweater material for his horns.  Felt for his eyes and he's stuffed with fiberfil. He's about 9 inches tall. I'm guessing on his measurements. I didn't really measure him! 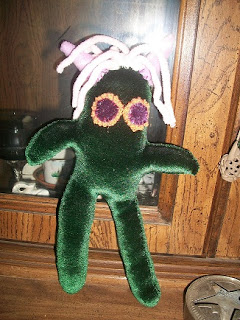 This one was started on the 29th but finished yesterday.
Again, green velvet for the body, purple fleece (used to be a pajama shirt-I still wear the bottoms of that set.) His eyes are orange polyester sweater and purple velvet. (Orange was a sweater my sister gave me to cut up for other uses and the purple velvet was once a skirt.) His hair is thick nubby pink yarn. He's about 7 inches tall. This is the least favorite of ALL the monsters I've ever made. To me, he's just ugly. It's the eyes, I think. And the fact his arms are all wonky and one of his legs is longer than the other one. Poor thing doesn't stand a chance in a beauty contest. Good thing this isn't one, yes?

I've done a few drawings since the last post also but none of those drawings are completed yet. They're just line drawings in black sharpie. One is an ATC the other two are Moo cards. You'll get to see them next time perhaps. 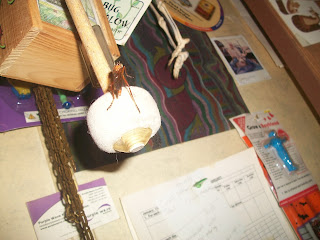 Can you find the monster in this picture?
He flew into the desk room and landed on my hand as I was playing Mahjongg and scared the living daylights out of me. It didn't take me long to realize that it was just a robber fly and he was not going to hurt me in the least! It feels rather strange when they walk on your skin though cause they have barbs on the end of their legs for feet. They stick good to whatever they're standing on. He's flown off of me and onto the felt drumstick that hangs on the wall by my desk (along with other various strange things). This was the best picture I got of him. Late last evening I found on his kind, dead in the dishwater sitting in the kitchen sink. :(
Robber Flies are very useful critters! They eat other bugs.

Here's a GOOD picture of a robber fly that I found on Google Images.
Be good to one another!
It matters!
Peace
831