Hello Readers!
Thanks for stopping by to see the newest creative endeavors I have been up to.  Grab a cup of something good and settle in for a long post. I'm rather chatty today.

I think some times I go too far out in left field in the art department when it comes to an All Types of Art Athon, also known as an ATART. I know that sounds impossible to do in light of the title of the Athon, but this last athon...the one going on right this moment, seems to me to be less accommodating to my muse than previous athons have been.
This doesn't stop me from creating, it only stops me from offering all of these creations up for trade. This doesn't mean they aren't up for trade (though some of these are not up for trade because I never intended for them to be for trade), it just means they aren't up for trade in the athon. It isn't any fun to participate if you feel unwelcome to do so.
This being said, I am feeling rather down these days and this may be some of the reasons I'm feeling this way today. No one person participating the athon has caused these feelings. They come from within me, not from something anyone did or did not do.
My daughter-in-law brought me a giant smile early today with her news via telephone that I will be kidnapped come the middle of September. I will enjoy that kidnapping tremendously, especially if both of my sons are involved in it! That remains to be seen though.

In addition to the creations in this post I have been working on polish stars, paper flower balls, mug rugs and other sewing projects. There is always preparation for the next project in progress. I have way too many projects in progress....that's a whole other story though and we are not going there today!

On with the art.....
I hope you enjoy the journey! 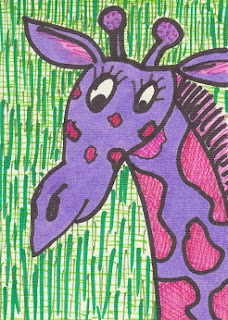 A lesson in cartooning a giraffe. Markers on cardstock. ATC
I never have been one to stick to any kind of rules. Giraffes are some times purple in my realm.

I was cleaning in the cutting room...OK, I was digging around in the cutting room a few days ago and ran across a small box filled with 5.5 inch floppy disks. Floppy disks from the age of the dinosaurs (in computer terms anyway). Books have been on the muse's radar for a couple weeks now and when I picked up that box of floppies, took a good look at them, it hit me that these would make fabulous book covers with a bit of altering, disguising and innovation.
I wasn't disappointed. 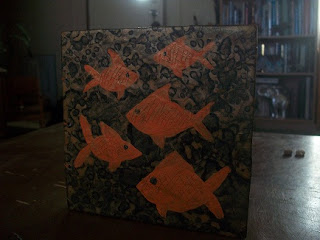 Sorry for the terrible goldfish pictures.
I took 13 floppy disks to the kitchen table where I proceeded to cover them in book pages with white glue as the adhesive. This process stiffened those floppies right up! The next day as I watched hour after hour of America's Got Talent on hulu, I stuck stickers all over both sides of each floppy to stiffen it a bit more and to use up those stickers and to give me a good surface for painting on. I still have three floppies laying naked on the kitchen table, waiting for their tranformations.

I have to tell you about the stickers. When RJ came down to see about the water pump, month or so ago, we went to the Dollar Store for something or other. While T and I were in the store, he looked in the dumpster to see what might be there. Well, he found a bunch of 'good' stuff! These stickers were among the 'good' stuff. Six, maybe seven rolls of these little tiny blank price stickers. They have Dollar General and the word price on them in black ink. Mostly white though.
He was just certain I could use them for something. I covered five floppy disk books with these little white 1/2 inch by 3/4 inch stickers and I still have four and half rolls left to figure out something to do with.  Wish me luck on that....

The boy also found a broken clock and about 150 little plastic fasteners. The clock is useless, but the hands and the clockworks themselves...ain't a thing wrong with them. You'll be seeing a clock in one of these posts soon as I can figure out what exactly to make the clock out of! 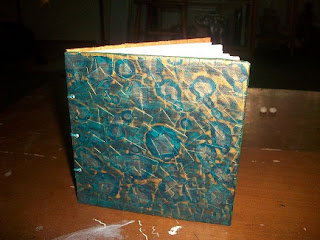 The blue and gold book and the goldfish book are both painted in acrylics. There's a fish picture on the inside back cover of the blue and gold book too but it is a terrible-TERRIBLE- goldfish painting so there's no picture of it.
The finish on them is a technique using acrylics and 91% alcohol. I found the tutorial for it somewhere...I forget just where....and finally decided to give it a shot. What you do is thin acrylic paint down to a watery consistency and paint your surface. While the acrylics are still quite wet you spritz 91% rubbing alcohol on it and it does some wonderful transformations! I laid down the dark blue, black for the goldfish, and let it dry before putting a layer of gold metallic acrylics and alcohol on.
The texture of the stickers kind of takes away from the wonderfulness of the painting technique but it's still quite a nice effect. Both books look much better in hand than the photographs make them appear! 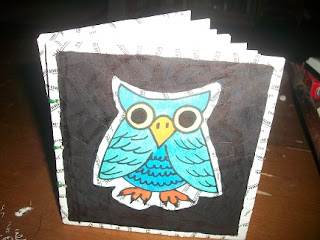 For the owl book and the two cat books, I drew the animals and then painted them with watercolors on paper. They are outlined in black sharpie. I cut them out and adhered them to the front covers and colored the black around them with a big sharpie marker. 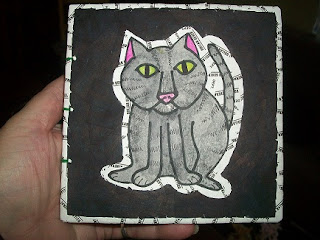 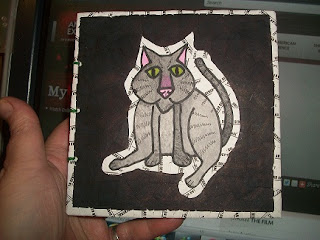 The back covers are simply the stickers showing.

I've a feeling the price stickers on these three books won't last near as long as the ones on the fish books simply because I neglected to seal these with anything before I sewed the books together. I'm not sure if the adhesive on the stickers is going to hang on as long I am hoping it will. The fish books, I'm not worried about the stickers coming off. I painted over those with at least two layers of acrylics. They're not going anywhere!

They're all sewn in coptic stitch with crochet cotten and have copy paper pages numbering 50. They are just over 5.5 inches square. 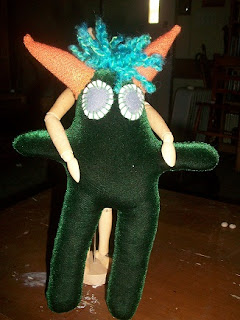 A few monsters were born.
This one is orange sweater material, green velvet and felt. I found some new nubby yarn for hair for the monsters. 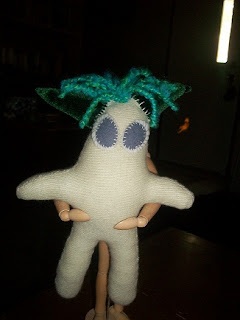 This guy is green cashmere sweater material and green velvet. I found four different colors of the nubby yarn at the thrift store for $2.

These two monsters are under 10 inches tall.
Art is insisting he likes the monster photo shoots so we will continue to allow him to hug monsters for the masses to see! 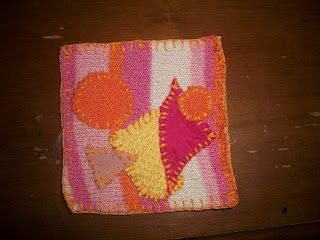 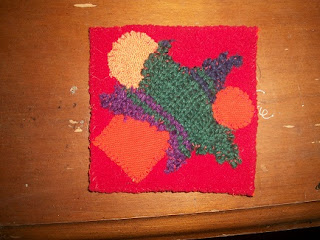 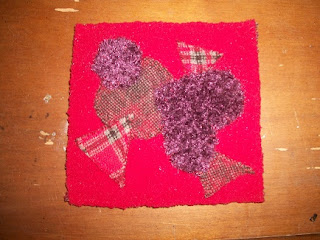 I sewed a few mug rugs day before yesterday.
My sewing skills are improving with all the monsters and mug rugs I've made. 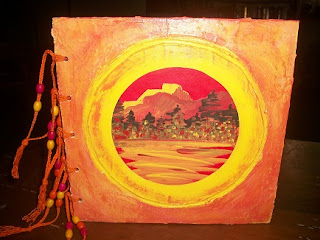 I FINALLY finished the red mountain board book.
I added the red, yellow and orange beads to the orange braided ties that hold it all together. 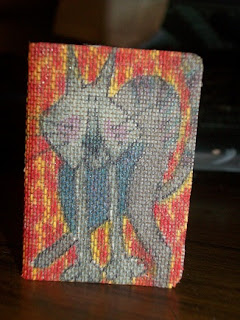 I can't tell you when I made this little book. It's made from a piece of plastic that came off a hard floppy disk. I've made lots of little books out of the hard floppies and I've always removed that black square of plastic that wraps around the edge of the hard floppy. That's what this is made from. I drew the cat on book cloth with sharpies and glued it around the thingamabob. I've no clue what to call the dern thing! I'm not sure how many pages it has....probably around 20 or so. The pages are a grid paper...graph paper. Vellum-like paper. I glued them in with white glue. The book is usable though it doesn't open at a comfortable level to do any serious writing in it. Though if you were determined to do so, it could be done!
I can't tell you when I made it cause I found it on the shelf above the scanner the other day. It was buried in crap that covers the surface of that shelf at the moment.
Been months since I last laid eyes on it! Had forgotten I'd even made it. 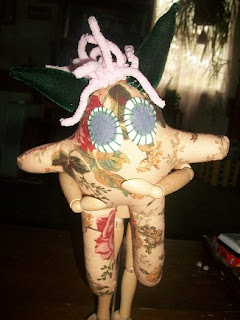 While digging around in the cutting room the other day, I ran across a take out box filled with fabric pieces I'd acquired somewhere, sometime. Five fat quarters of flannel and two other hanks of material I'd bought brand new sometime in the past. I made flowered monster out of half of one of those fat quarters of flannel. You can't see them well, but he has green velvet horns also. 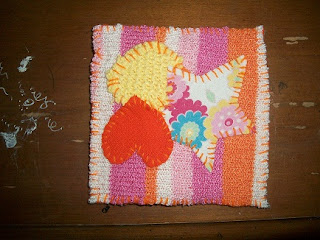 Today is Evelyn's birthday.
I sewed her a mug rug last night. 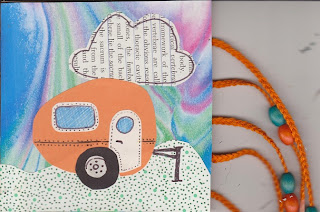 And finally a chunky page!
It's collaged. I don't do well with collage. Someone sent me the paper used in the background. The orange trailer is part of an envelope. The text comes from a medical text book, as does the door and the window and hub of the wheel. The ground is scrapbook paper with more green dots added with a sharpie marker. The wheel is just black paper and the hitch is drawn with a marker. I used the remnants of the braided cotton string from the Red Mountain Book along with the the same wooden beads used on it. The base is recycled chipboard from the back of a pad of drawing paper. Backside is just orange envelope paper with my info written in black marker. 4x4 inches.

Thanks for taking a look!
Be good to one another!
It matters!
Peace
831