Monsters, Some Flowers, the pink sea and Dinner (of sorts)

Yeah, I know, I was just here yesterday!
Things happened.

It's 5:40 p.m. I've been awake right at 24 hours now so if some of this makes no sense whatsoever, pay it no mind, take your laugh and leave it at that. I'll probably laugh tomorrow when I re-read it myself!

Monsters were on the early morning agenda. 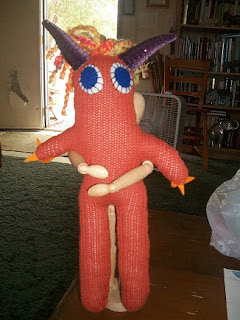 I made this orange fella while watching re-runs of Antiques Roadshow around 4 this morning. He's about 13 inches tall, made from an ugly orange/rust sweater, felt for his eyes and fingers (yeah, that's something new on a monster!), velvet for his horns and nubby yarn for his hair.
He REALLY needed hair. My goodness, his head looked like a zombie had gotten ahold of him and then a mad doctor sewed him back up! His hair hides my terrible stitchery!
The fingers were an experiment. It was a failed experiment, considering I sewed half of his fingers in the seam at the end of his arm. I'll give fingers another try to see if I can get them to turn out how I think they should turn out. This ain't it, though!

You see that big gouge in the door on the left side of the picture? I have Fred dog to thank for that big hole! Who'd a thunk a dog could tear through a fiberglass door? If he'd a worked just a tad harder, he'd a made it clean through that door! No one was home at the time this happened. He wanted in the house and apparently there wasn't anything that was going to stop him! Except the screen door latching when he took a break from trying to get in the house.
I have only myself to blame for this fiasco. I didn't latch the screen door when I left that morning to go to Hays with Ma. We were gone for a good 6 hours that day. It was nice outside though... not terribly hot out. I've no clue why that dog thought it was paramount he get in the house. He probably would have gone all the way through the door had the screen door not shut completely when he walked away from the door. 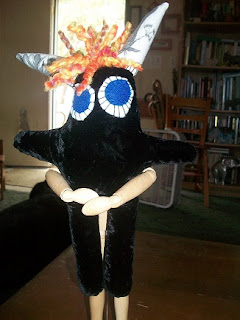 One monster wasn't enough for the morning....
I sewed this fella between 10a.m and noon, waiting on Ma to show up to take my hide to town. He's made from black velvet, his horns are t-shirt with flower print, eyes are felt and his hair is nubby yarn. He too needed some hair, but not quite as badly as ol' Rusty up there did! This one is about 8 inches tall.

I told you all about these flower balls yesterday.
Here's some pictures as proof! :) 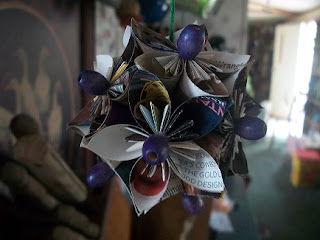 It took me a few days to actually finish this ball. I could only glue one bead at a time on. Had to wait for glue to dry completely between each so the beads would stay attached. They aren't really stuck, stuck. They're stuck, but a good bump and that bead IS GOING TO FALL OFF! I kinda like the flower balls with beads! 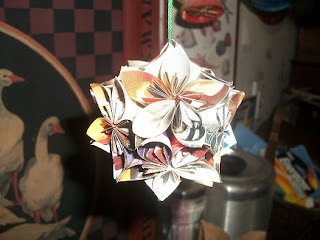 And here's one without any beads. I made it five or six days ago.
magazine paper
There will be more of these in the near future. I have almost enough units made to put another one together. If I get down on my hands and knees and search the floor under the desk, I may find I have plenty to put another one together.
That fool cat, Lola, knocked the little box off the table by the desk that holds all the units while I make enough of them to assemble a finished ball. They went everywhere! I picked up a lot of them, but I didn't look really hard for any that I couldn't reach from sitting in my chair.

Progress was made on the Fish Picture! 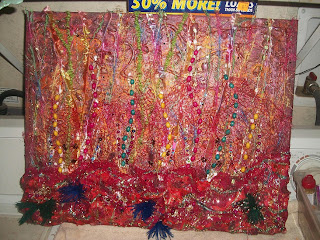 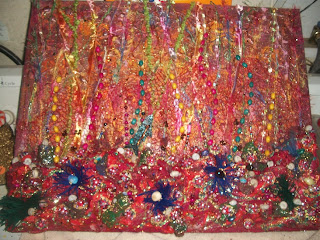 This is what it looks like at the moment.
I didn't do anything to the upper part. I added a bunch of stuff to rock shelf though.

I have not really worked much on it throughout the day. I should have been figuring something out with the fishes, but it will have to wait till later. Not much later...I have to have it completed...that means DRY GLUE by Monday afternoon! 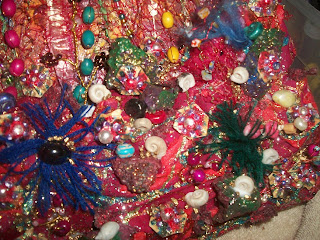 My sister Jeanny hooked me up with the gemstone beads.

The failed bucky ball units are those hexagon shaped things (there's one about in the middle of the picture and I count nine of them showing...they're folded of paper [origami] with gesso piped into them and a fake pearl stick in the center. I then painted them with red and blue ink and  early this morning I put some purple dots around the fake pearl).

The freshwater snail shells were a gift from my grandsons. They brought me a boatload of them from Webster Lake a few months ago. I put a dent in the cache with the ones  used on this picture.

The little gold rocks came from Ma who bought a jelly jar full of them at a yard sale for a quarter. There are enough little gold rocks in that jar to last me and ten other artists for a lifetime! Someone took coarse sand and spray painted it gold. Least that's how I think they achieved that effect. I'm really not sure how, nor even why, they got that sand gold, but that is what it is! Gold sand. It worked great as a filler in of odd spaces on this fish picture though! 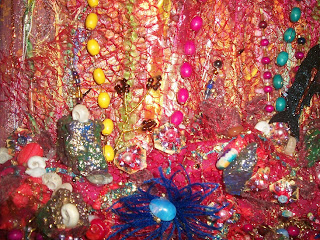 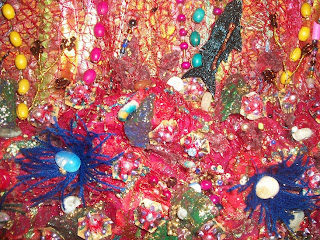 Pay no attention to that fish! He's not supposed to be there!
I had all the fishes laid out on the canvas where I thought they should go to see if I had enough fishes and when I took all the fishes off, this one got away from me! I didn't notice he was there till after I'd taken about 6 or 7 pictures! 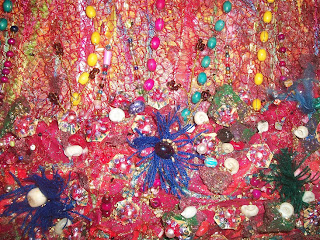 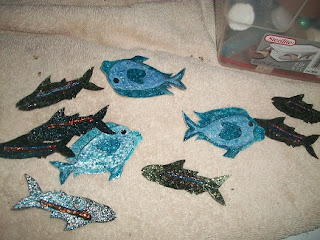 Fishes.
Ma thinks I have too many fishes. She said take away one blue one and three black ones. I think it needs all of the fishes. At least all of the fishes of one kind. I'm rather partial to the left over blue fishes from the last fish picture. They're a different color on the other  picture.
To be honest...even though I am at the eleventh hour, I'm not sure just what will happen with the fishes. I might just make a whole new school of them. These fishes just don't act like they want to be in the pink sea.
I am leaning towards green fishes....but it's still up in the air with the fishes.
Stayed tuned!

I was ranting about food earlier elsewhere. Guess I'm not quite done, yet. 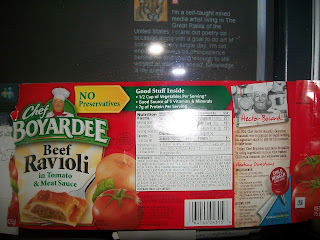 This stuff tastes like something one would throw out in the garbage! I can't believe I actually paid good money for it!
I used to LOVE this stuff! Could eat it by the case....now it isn't fit to eat.
I think they changed the formula.  That ingredients list should of been my first clue to leave it on the shelf where I found it!

It's ravioli. Why does it have to have all this crap in it that I can't even pronounce?
ConAgra and Monsanto are in cahoots!
If that was beef, I'd hate to see the cow it came from! Cause it sure the heck does not taste like beef!
I ate five raviolis out of the bowl and gave the rest of it to Fred. He gobbled it right down. He's a dog though, we can't even consider his recommendation. Trust me on this one! I know this dog! He will eat shit!
I had a nice fresh chunk of cantelope instead!
My spell checker says that is not how you spell cantelope. One of the suggestions it gave me is "can't elope". Nope. I sure can't! One needs another to elope with if one is going down that road! It made me laugh! 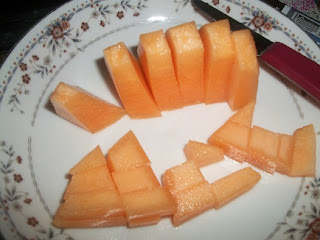 I've rambled on enough for one day!
I think I hear my bed calling....gotta fix my fan before I climb between the sheets though. Dern thing died on me this morning when I turned it off. It won't turn back on now. I knew it was on its last leg...I need the fan to sleep though.

You all behave yourselves, be kind to one another and show a little more love today than you did yesterday. Love comes in a never-ending supply. All you got to do is hand it out and it comes back ten-fold!
Peace, my friends!
831