Paper Stars, A Magnet Makeover and Some Altered Envelopes

Hello Readers!
I've been busy in my cutting room, still putting things away from the overhaul. I can't easily find everything I'm looking for these days but all in all, the overhaul was an excellent plan and it is showing fruition.
Now to get that pile of beads and beading supplies gone through and in some semblance of organized...I keep looking at that pile and finding better things to do than tackle that chore!
Soon. Soon the beads will be on the empty shelf intended to hold the bead collection. Can't say just when 'soon' will occur, but soon! :)

In the meantime, when I haven't been asleep. I've been sleeping a lot here of late. I've been busy folding little brown sheets of paper into what you see in the picture below. 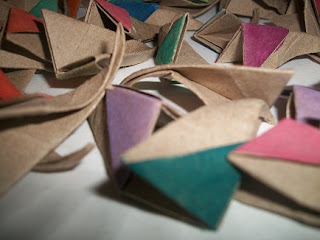 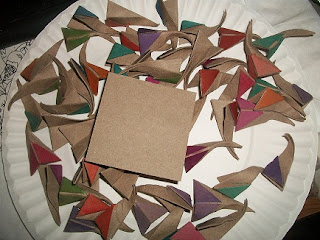 They start out as a 3.5 inch square of brown kraft paper. Paper bags would work beautifully for this project. That is what she's used in the tute I followed. I just happen to have a stack of heavy brown kraft paper. Not sure where I acquired this paper. I have about 30 sheets of it, quite large they are. 24 inches by 18 inches? I'm guessing there, forming my hypothesis on the size as in comparison to my guillotine cutter. The sheets had to be torn in half to be able to use the cutter on them. The cutter is 16 inches wide...at any rate, I cut the squares on my cutter and put two sheets of that stack of paper to good use.

Here is the link to the tutorials I used to achieve the end result.  If you want to know how to construct the stars out of any old paper you have hanging around, and not do the painting on them, then just go to the first link. It will show you how to fold the units and assemble them simply into a star without curled ends as mine have. If you want the curled ends and to know how to do the painting, then you'll have to go to the second link to find that info. 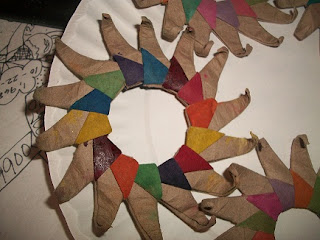 This was the first of the stars completed. They are just under 4 inches across. I didn't know how easy it was going to be to fold the units as I've never made this origami project before. I discovered it was a cinch to make! Time consuming, but really easy.
You do have to keep your squares as square as is possible when you cut them as that makes it easier to fold the individual units needed.
My painting could have been a little neater, which it isn't on the last four either, but it could have been neater!
I used pan watercolors to paint them. Just plain old school watercolors like the kids use in grade school, nothing fancy or expensive. You could essentially make these out of things you have laying around! I think they'd look exceptional with fingernail polish instead of watercolors!
Wish I'd thought of that before now! I have a box of better than 100 bottles of nail polish in more colors than you can shake a stick at! 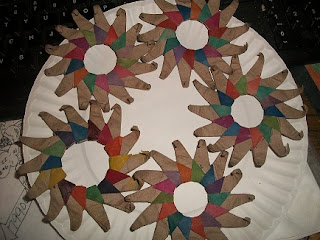 You don't have to use glue on them. They will stay together without it, but I glued mine together so they can have a hanger put on them to hang somewhere. I'm leaning towards fishing line for the hanger.

I'm not sure why the one at 8oclock in the picture is bigger in the center than the others. Might be the paint? I used two different sets of paint on them. Didn't really notice that difference till now when I've been sitting here looking at the picture!
Edit:
The reason that first one is so much thicker, thus larger in the center than the others is because I did as was suggested in the second tutorial where she shows you how to paint the things. I crumpled my brown paper and then ironed it out flat before cutting it into squares. I did not crumple the paper on the others.
Give making them a shot. I made three others that I forgot to take a picture of that have flat points and are made from scrapbook paper and magazine paper.
The scrapbook papers hold together quite tightly with a bit of depth to the finished star. The magazine paper is quite flat in comparison to the scrapbook paper. The brown paper gives the most impressive dimension to the finished star of all the papers I have used to make them. Any paper will work though.
I believe this would be a fun project to do with kids. It does take a little while, and a bit of practice to get the units folded, but you only need 14 of them to make a star. I used all of the units I made, even that first one. The more I made, the easier it got to fold them.

My muse is fidgeting when it comes to ATCs. She seems to want other sizes to tackle. I always keep the scraps from cutting blanks and book pages. I have lots of little pieces of paper that are not big enough for an ATC, but still big enough for SOMETHING. Least that is what the muse says and I have to follow where she takes me. Keeps me sane! :)

Going through things in cutting room, I ran across five little matboard magnets with folk drawings on them. Outdated, mass produced. They begged to have a makeover!  And I didn't have to cut the paper to fit in them. 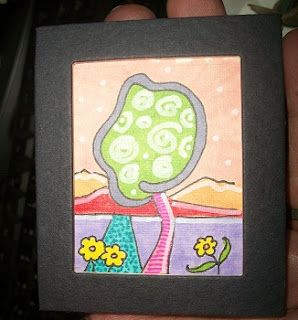 This is the only one done thus far, but the others are laying here waiting for a new drawing to grace the opening in the mat. I did the drawing on cardstock in markers and white paint pen.

The frame is 2 3/4 x 3 1/8 inches. The inside of the frame measures 1 3/4 x 2 1/4 inches. I don't know the size of the paper the drawing is on. It fit in the space allotted perfectly so I went with it.
Before doing the drawing I traced around the inside of the frame lightly on the cardstock with pencil and only colored just passed those lines. The pencil were erased after the drawing was done. I then glued the backing to the frame and put the magnet back on with fresh glue.

The remaining four of these will have a piece of acetate covering the opening in the mat. I always think of the good stuff after the fact!  With the acetate covering them, I can do collage if I feel the urge for a challenge.
Next post you'll see the rest of these magnets.

I did a couple of altered envelopes day before yesterday. 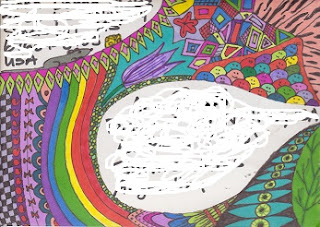 This one flew off to Argentina.
I didn't get the back side of this one even started. It is plain white like the front started out being. Mail run day came before it was done.

My young friend, Daniel will be getting this colorful envelope any day now. I made a three for three ATC trade with him. His first trade of any kind in the mail art world. I'm hoping it becomes an addiction for him!
I've known Daniel since he was about 14 years old. He and my youngest are very good friends. We've discovered, just recently, how much we have in common though our art.

My zentagles aren't usually quite this colorful...I used dang near every color of marker I own with the exception of the browns and greys! I decided to send Daniel an altered envelope in the hopes that getting a really cool envelope in the mail, that contained other cool things, would truly entice him to delve deep into the universe of mailart!

I watched a few documentaries on various subjects while completing these two envelopes. I learned a few things while doing so.

I'll be back another day with more things to show.
I'm still working on the felt ornaments. No progress has been made on those at the present moment. I'm also still working on the pink velvet monster. Progress has been made on it. Not much progress though and none to speak of really. So, that being said, we'll see if I can deliver on those with the next post beings I totally missed it for this one like I had mentioned!
Someone had to do the laundry though!

Be good to one another!
Thanks for stopping by!
Peace, my friends!
831
Posted by Donna at 5:34 AM