It's a chilly morning in NW Kansas. I've been awake for about an hour and a half now. It's about a quarter to eight, the sun not quite high in the sky. I don't think it is going to be very warm today.
My back is giving me a lot pain so I'll probably spend a lot of my time today laying in bed reading The Appeal by John Grisham.
Ma brought me that book the other day when I saw her. It's a first edition and one I've not ever read! I am trying to collect a copy of every book John Grisham wrote. I'm only missing a few of them at this point. First Editions are a bonus! I started reading it yesterday afternoon when the old back decided to be a bear of a companion. I'm hoping it's just the fibro acting up and there is nothing actually wrong with my back. Back problems run in the family and I don't want major back problems, I already have enough other medical problems to deal with!

I made origami stars yesterday.
LOTS OF ORIGAMI STARS! 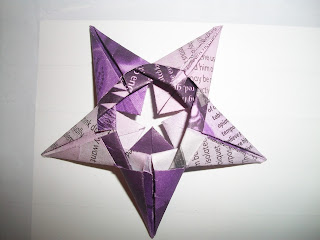 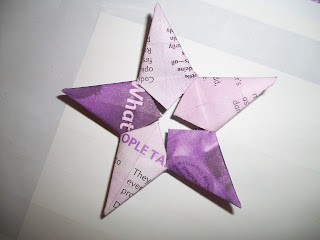 and the other side.
This one is made from newsprint paper. Getting some more use out of the drug pamphlets the Chief gave me last year. I still have a LOT of those pamphlets to something with. You'll probably see more of these stars made with different colors of paper from those pamphlets. There are 10 pamphlets in each box and each pamphlet is a different color I do believe. 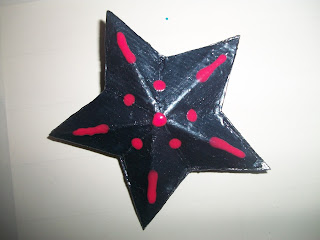 I got the 3D watercolor paper star to do what I wanted it to. This is the white star from the last post that I said wasn't put together right, wouldn't stay glued together...I'm not sure just how I fixed it, but I did. Then I painted it with dark gray nail polish and bright pink dots of the same. There's a magnet inside this one so it will stick to a metal surface. That's one powerful little magnet inside this star! Overkill really, for something that weighs next to nothing! I gave this star to Ma day before yesterday. 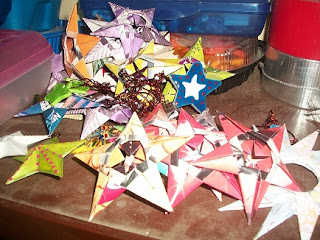 A pile of stars.
This is all the stars I've made since I started this star project. Most of the origami stars in this picture were made yesterday. The ones in the front are are made from magazine paper. As soon as I figure out which ones are going in the swap, I'll take another, better, picture of them. 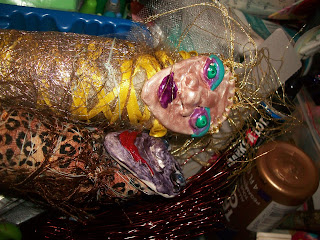 I just don't know about these two dolls. I painted their faces with fingernail polish yesterday and I'll do a bit more (of something) today. Not sure just where they're heading. They're taking their sweet old time about going though! This is not the last of these two characters!

I promised to show you all the flock of cranes I've folded. 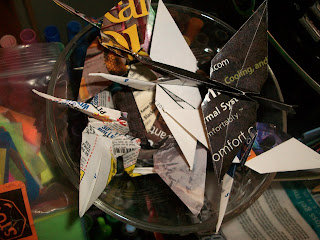 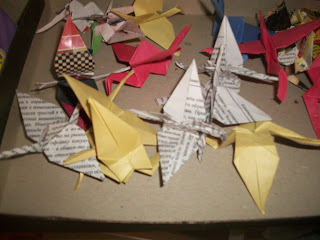 The flock has not grown in size since I last spoke of them.
I will fold more cranes in the near future. 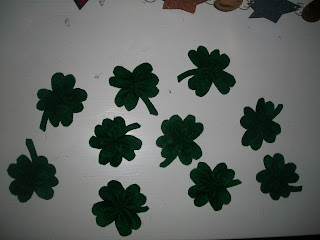 I ended up with 10 felt shamrock magnets. I gave 5 of them away to three of my sisters, my mother and my aunt at the St. Patrick's Day Party my aunt threw.

I glued magnets to the backs of the bottle cap junk magnets.

I'm not sure what is on the agenda for today. I need to get mail ready to go to town tomorrow. Need to make out bills...don't need the sheriff coming after my hide for not paying my property taxes. Someone should attempt to do the dishes. There are 12 million different things that need done, but having the energy to do them is next to impossible today.
Maybe I'll sew some little books together today. I still haven't done that one I gave you a sneak peek at the other day. And there are a couple more little books ready to go to the next stage as well.

We shall see how my back and my muse play together today, if they play at all!

Thanks for coming round today!
Be good to one another!
It truly does matter!
Peace
831
Posted by Donna at 8:12 AM