As I opened the window to make this post I realized those half finished angels on the kitchen table didn't get their picture taken for this post. So...Angels are pending!
I was here last on the 9th of April. It snowed later that day and into the next. We had rain, sleet, snow and hail, in that order, with thunder and lighting to accompany the symphony for a few hours in the afternoon of the 10th. My front porch had a two inch layer of ice, snow and little pea sized hail balls. The bulk of it hail balls. Took almost 48 hours before all traces of the symphony were erased with sunshine and decent weather!
I'm sorry to say I have no pictures of the weather and the havoc it wrecked.

I took a roadtrip with Ma to Hays on Thursday. The furkids were grateful. They were completely out of food, all of them. The cats ate every single crumb in the bowl! I really didn't feel like going shopping but it had to be done so I did it.

Ma and I were on our way to the thrift store in Hays when we both spotted a pile of junk down an alley. We whipped around to the pile and found some useful things. There was much more there than we had room to take with us! Ma got a nice big decorative urn for her yard and two metal patio chairs.
We had to leave behind the good junk cause we still hadn't gone grocery shopping.

We sold the chairs at the thrift store. Hadn't planned on that happening but it did. I had bought a bunch of books, (no surprise there but hey, they were half price!) the lady behind the counter carried the box of books out for us and she saw the chairs in the back of Ma's truck and asked us about them. We told her we'd just picked them up in an alley on a trash pile. She offered us $10 for them. We were then a good 50 pounds lighter with our freight! And Ma was $10 up on gasoline!
It was a good thing we got rid of the chairs because we filled the back end of the truck with groceries.

I bought a new cabinet to sit beside my desk here. I didn't take a picture of it either....I'm slipping, apparently. It's a four drawer plastic chest on wheels. It does not hold near as much as I wish it would. I need another drawer for my paints, oil pastels, inks and the like. I think next month I will buy it a mate.
I got side tracked with cleaning off the cd case that sits on the right side of the desk here before I ever got around to putting the new cabinet together and doing away with the wooden TV tray that sat on the left side of the desk.

I was dreaming of paper mache projects on Wednesday and thinking about that new cabinet I'd bought the day before and my muse was hollering WE HAVE A BUNCH OF BOXES! I couldn't argue that point! 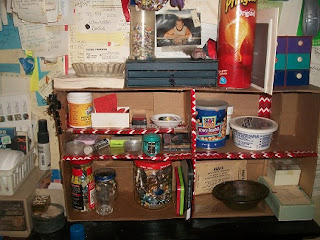 Two birds killed with one stone! I got my paper mache fix....well, sorta... I could take this little cabinet a LOT farther with some paper mache added on! And I got the cd case cleaned off and organized which lead to even more organizing. And there's still organizing to do. Sigh.  Progress was made though!
I had 5 boxes all the same size. This shelf here ended up being 22 inches long x 11 inches tall x 4 inches deep. I cut off all the flaps and used them as dividers/shelves. It's simply taped together with duct tape. The long shelf at top left is two thicknesses of cardboard taped together before being taped to the sides. That shelf won't hold much weight. The heaviest thing there
is the little white porcelean bowl on the right side.
What was in this cabinet's place before was a big jumbled mess!

I got all this paper organized that was running amuck in the chaos of my creative space and decided, after seeing a picture of a kusudama ball that was 8 inches in diameter, that I needed one of my own that size. 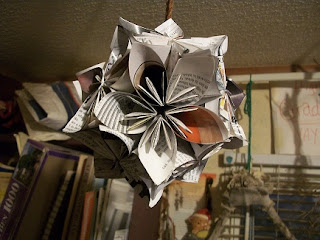 6 or 7 hours later... I had a sleep in the middle of making this one! I ended up with a ball not quite 8 inches in diameter, but much larger than any other kusudama ball I've made. And I've made about 24 of them. It looks pretty cool hanging from the ceiling in my deskroom. It's just magazine paper folded to make the units and then all 60 units are glued together to form this!  The other's I've made are about 3 inches in diameter. They take a lot longer to make than this bigger one.

I was actually playing around with this woven paper ball tutorial I'd skipped across while surfing the www when I said let's make a kusudama instead. I later came back to the woven paper ball. 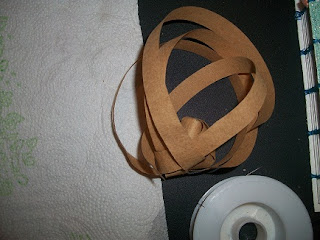 Which as you can clearly see has not gone well at all!
The premise of this woven paper ball is that you braid 4 flat pieces of paper into a 4 strand braid. I got that skill down pat using pipe cleaners! Yep. whipped out two 4 plaited braids with no trouble at all!
I cut the paper 1/2 inch wide and 12-13 inches, I don't know I didn't measure that. I  taped them together at the end and cut the end to a point. It just didn't work. I spent HOURS trying to braid this paper into a ball! It's kind of a ball but I couldn't figure out what the hell to do with all those loose ends. You're supposed to weave them into the ball but it eludes me just how one might accomplish that. So, no successful woven paper ball out of me this post. I will conquer the woven paper ball.

I sat on my butt all day today folding origami cranes and watching episodes of Pure History. I can't remember what any of the four episodes I watched were about. At this moment, I haven't a clue. I know I folded 23 cranes in four hours time though. 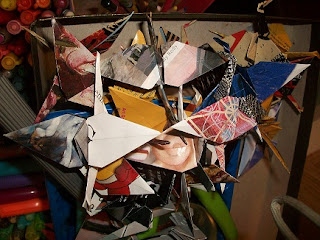 And that is the bulk of my creative endeavors in a 5 day time span.
It means I'm still alive and kicking!
:) Yeah me! I tell you some days I feel as though the old body is just going to say 'screw it, I'm out of here'. The past week has been one filled with sleep and this old body of mine in rebel mode! That meaning I hurt like a Big Dog from the top of my head to the tips of my toes. Not generally all at the same time, just parts of me. No rhyme. No reason. Fibro sucks!
I am quite thankful the headaches have ceased. Not had a bad one in months! Keeping my fingers crossed!

Thanks for stopping by and reading through to the end!
Be good to one another!
It truly does matter!
Peace
831