More Baskets, An Update on Soybeans and A Couple in the 'Pond'

Art endeavors are going slow these days. As usual, I have many irons in the fire but here in the last few days, nothing much in the art department is getting done.
I've been working on my September partner's envie surprise for the past few days and I can't show it to you just yet cause, 1). I'm not quite done with it just yet and 2). You all can't see it before she does! So next post, maybe the one after, you all will get the lowdown on that surprise.

I have been busy with more baskets though. Not gungho busy, but slow and steady busy. 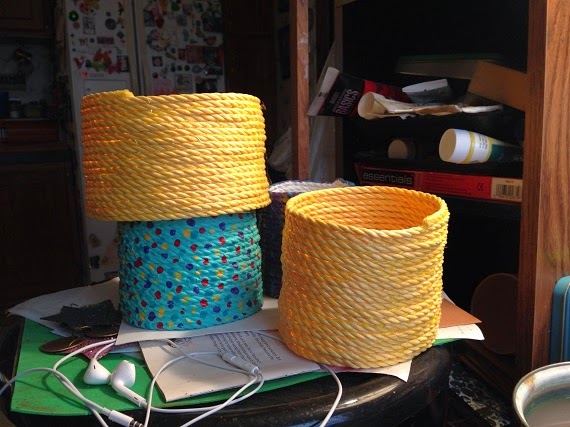 One of these days I will be able to say, "All the polyrope is used~!" I can't however say that today as there is still a boatload of it to do something with! Two more yellow baskets made! There is actually another yellow basket made too but I made it late last night and haven't taken pictures of it yet. It looks pretty much like one of those in the picture except it isn't quite as deep and it is oval shaped.
You all saw the spotted blue basket last post. It still looks the same as the last time! Not sure if it's done yet or not. The yellow ones are NOT done though. 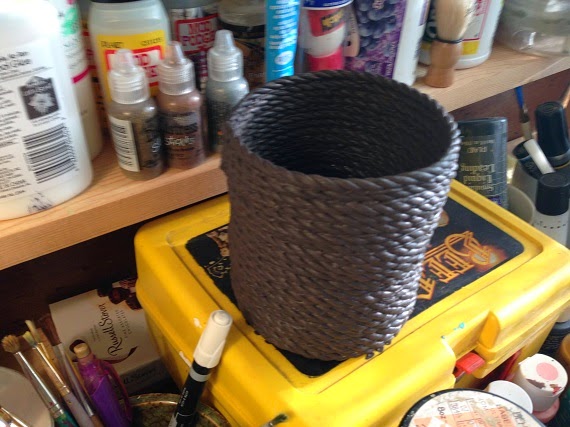 I painted both of the newest yellow baskets with brown wall paint. 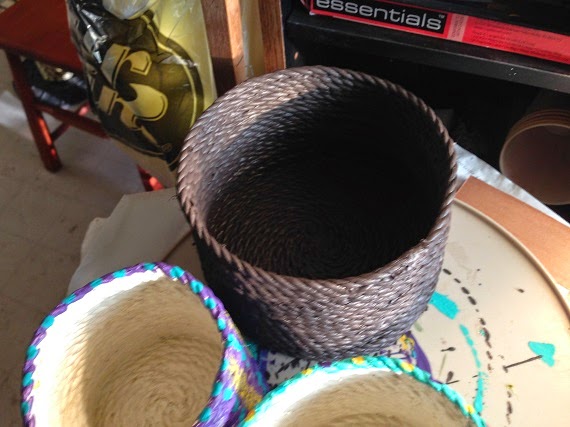 And didn't get any farther done with those yet. I'm thinking Halloween baskets for these. We'll see what happens with I drag out the paint brushes and get started again on these!

I wanted to point out my Bee Gees lunchbox. The basket in the top picture is sitting on the lunchbox. In that box is where I keep my hot glue gun and extra glue sticks. Lunch boxes make excellent storage containers! They're roomy, durable and they have a nice handle for carrying! If you come across one at a yard sale or a thrift store, don't hesitate to buy it! Last count, I had about a dozen lunch boxes. Some of them are collectors's items, like the Bee Gees lunchbox, but to me, they're more useful holding things than just sitting on a shelf collecting dust! I already have plenty of things that sit around collecting dust! 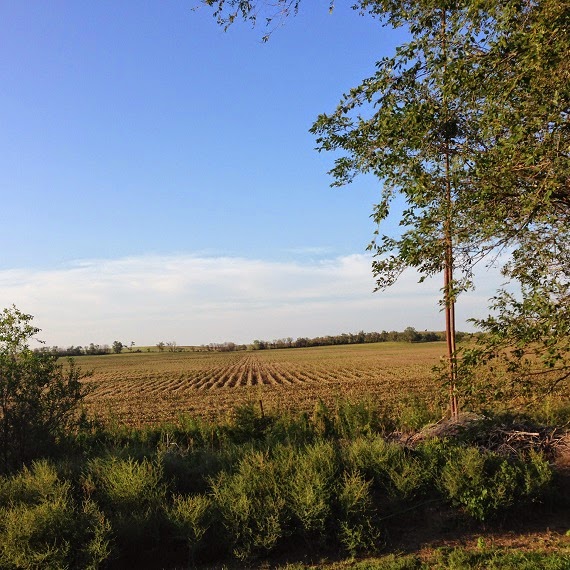 Update on soybeans......
the whole field is now turning brown. I'm still not sure just when they'll harvest this field, nor what machinery will be used. I'm assuming they will go out there with a combine but I don't really know! I'll keep my eyes peeled and take pictures of that process if I'm awake when it occurs. This picture was taken on 16th of September. 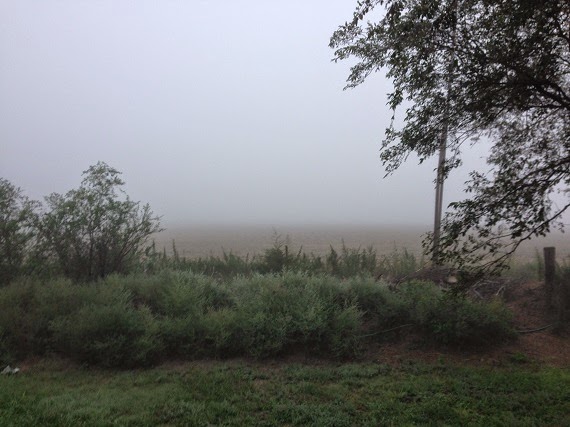 And when I woke up early on the 17th, this is what I saw looking out over the soybean field. That fog was beautiful that morning!

I had  visitors on Wednesday. My daughter in law and her four boys came to see me. Her dad was along for the trip as well. He was their the chauffeur as the kids had some bad luck with their vehicles early in the week. Son's car started leaking oil like mad and Lue's van just wouldn't start! So they are without wheels for a bit. The kids had to go to the eye doctor for new glasses--all four of them wear glasses--and Gramps was the only driver available with a vehicle to get them to Hays to see the eye doctor.

As is usually the case when the kids come to visit, the boys traipsed all over the property, looking at all kinds of things. Out front of the privacy fence is an old fish pond that my sons and I put in some years ago. Putting that pond in is one of my favorite memories! My two boys were in their early, early 20s--before either of them were married. I had been whining about getting the hole dug to drop the octagon bathtub into and the boys showed up with a big bottle of rum, some Coca-Cola and two shovels at 1 o'clock in the morning, saying they were ready to dig! We got so sloshed on that rum and coke, out there under the yard light, digging and giggling like school girls. I didn't do much digging that night but I drank enough rum and coke to get a tad sloshed. I traded a wheelbarrow full of limestone rocks for that fiberglass octagon bathtub.
That pond is still out there but it hasn't actually had water in it for about five years, maybe longer. It isn't visible from the highway as you're driving by the place but it looks a bit out of place when you're standing beside it cause it is empty except for a little water when it rains. It won't hold water now because apparently fiberglass bathtubs aren't meant to last forever! We have some holes and cracks that will not let the water remain.
One of the things the pond is good for now is collecting bugs. Lots and lots of bugs. And where there are bugs, there are spiders to eat those bugs! And in case you all aren't aware..... I LOVE BUGS!
The grandboys were doing their thing and came across a giant spider in the pond. I didn't have the phone on me at the time so I didn't get a picture of the female wolf spider with a grasshopper in an embrace. She had one leg wrapped firmly around that grasshopper that was almost as big as she was.
I wouldn't let the kids kill the spider. I don't have a problem with spiders. Spiders are very useful creatures and if you leave them alone, they will leave you alone as well. Both of my daughters-in-law are deathly afraid of spiders. Lue wasn't getting anywhere near the pond with that gorgeous wolf spider in it! The grandboys and I just laughed at her.  Not mean laughing, just teasing her. She expects it! As does my other DIL. No mercy for scaredy cats when it comes to spiders! Especially little spiders! Come on, Girls! They're just little spiders! 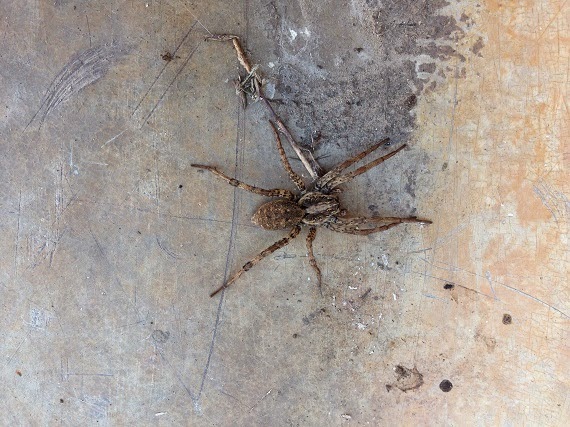 OK, these two weren't so little ..... This is the male wolf spider who wasn't in the pond when the boys found the female. He had about a two inch leg span. 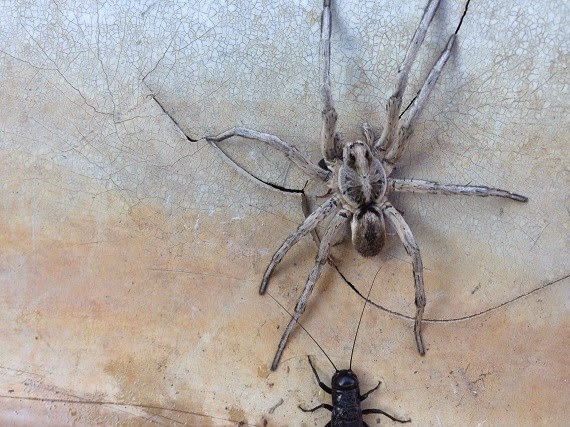 She is a LOT bigger than the male. 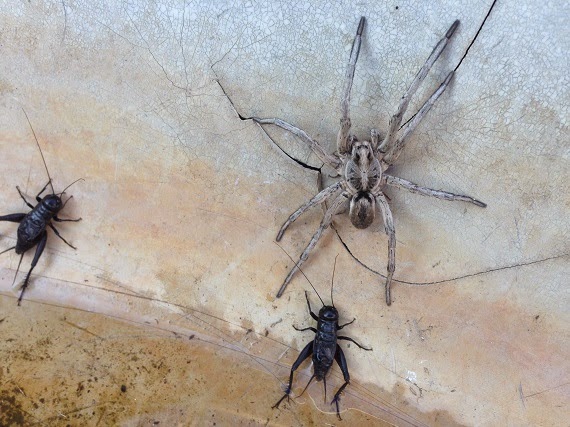 I tried to put my finger there beside the female but I need both hands to take a picture with that phone. The crickets are about an inch and a quarter; maybe an inch and a half long. That gives you some idea of her size. Somewhere around 3, maybe 3 and a half inches. I've no clue where her grasshopper got off to. I came back out to the pond after the kids had left and the spider was only in the company of crickets, dead grasshoppers and big black beetles with pinchers (that one doesn't want to mess with! They bite! And it hurts like the dickens!!!) I really wish she had had an egg sac with her! Wolf spiders do not weave webs. They carry their egg sacs on their backs and when the eggs hatch, they carry dozens of baby spiders on their backs until the babies are able to survive on their own. It's the wrong time of the year for baby wolf spiders though! Wolf spiders do bite and it is a very painful bite but wolf spiders are not aggressive. You have to really piss that spider off by being mean to it before it will resort to biting.

Today I am going on a treasure hunt with Ma. Here in NW Kansas there is what is called the Highway 36 Treasure Hunt each September. It's a whole bunch of yard sales all along Highway 36 through Kansas for three days. This year, it is this weekend, beginning on Friday. That's today! We will be driving Highway 36 when we go to Smith Center later this morning. Ma needs a couple new struts for the lid on the back of her pickup truck. She says Smith Center is the only place to get them. So wish me luck on finding some great bargains along the way!

It is going to be a long day! I got up a couple hours ago at 2:30 a.m. I'll be ready to crash come this early this evening. I was asleep by 6pm last night. That would explain why I was wide awake at 2:30 this morning. Yesterday it was 1:30 am when I woke up. I can thank Fred dog for my early awakening yesterday.
Fred isn't doing so hot these days. The last couple of days his front legs have been giving him as much trouble as his back legs. Poor old thing is having a time getting from one spot to another. I've doped him up on Bendadryl and aspirin trying to keep him from acting like a puppy. Dang fool critter can hardly walk some days yet he still wants to chase that softball. I won't throw the ball for him when he's not moving too well, but that doesn't stop others from being sweet talked by that dog.

Time for me to get busy and accomplish something before the sun comes up!
Thanks for hanging around till the end!
Remember.....
Be good to one another!
It matters!!!
Peace
831

Wolf spiders look just like the cane spiders that we have back home in Hawaii...only those wolf spider's look a lot thicker and more menacing. I'm not afraid of bugs unless they land in my hair or in my clothes....but even then I manage to keep my composure.

I feel bad for Fred dog. Hopefully he will have more good days than bad.

I'm excited for your thrifting trip! Hope you take some pics! Good luck on finding all those treasures! :)