It was five or six days ago I made the last blog post. I've been busy since then.
I finished sewing the Day of the Dead Skulls. 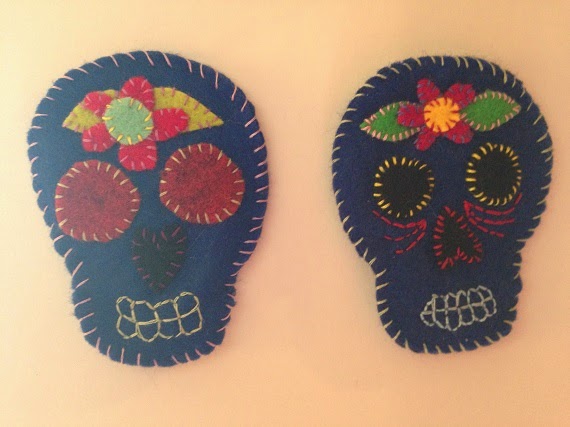 The one on the right was the first skull I sewed. It has a different magnet inside of it than all the others do. The others also have an insert of chipboard to stiffen them up a bit and so there was a place to glue the little button magnet to. 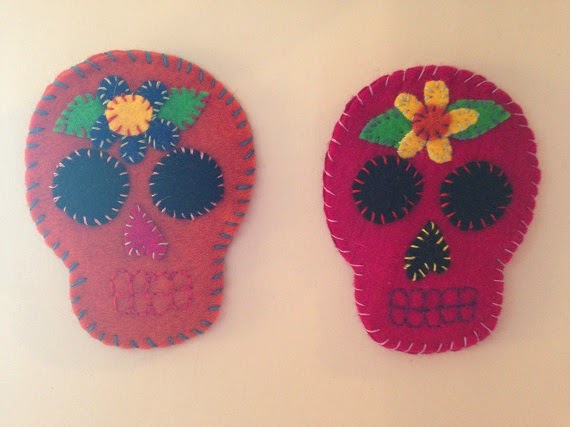 These pictures suck because it was the wrong time of day to be taking pictures in the kitchen! 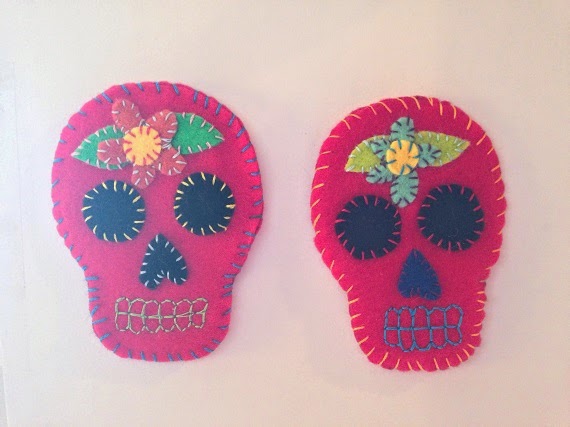 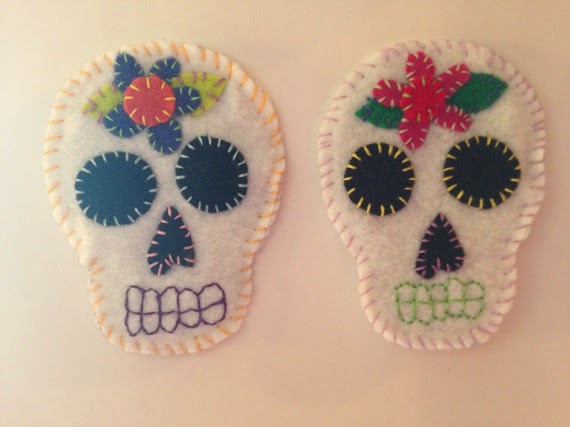 The white ones are my favorites!
I will more than likely (sometime in the future) make more of these. 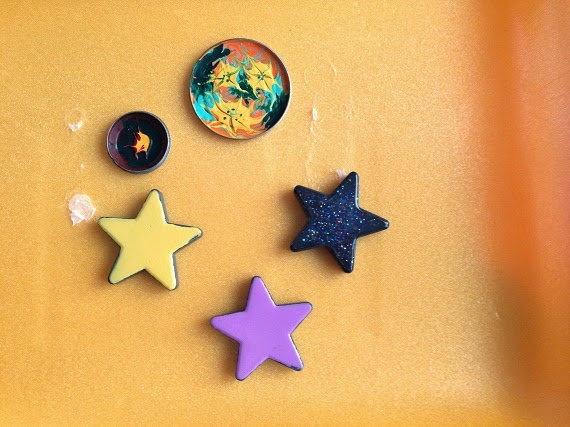 Some random magnets.
The round two are watch backs with acrylic paint in them. I still have to put a coat of dimensional magic on them and stick a button magnet to the backside of them.
The stars are ceramic magnets painted with fingernail polish. The sparkly one is covered with only sparkly dimensional magic. The DM looks exactly like the FP. I still have about 2 dozen watch backs and another 7 star magnets to do something with. I don't think the yellow or purple star is quite done yet. They'll probably end up with dots and dashes of various colors. 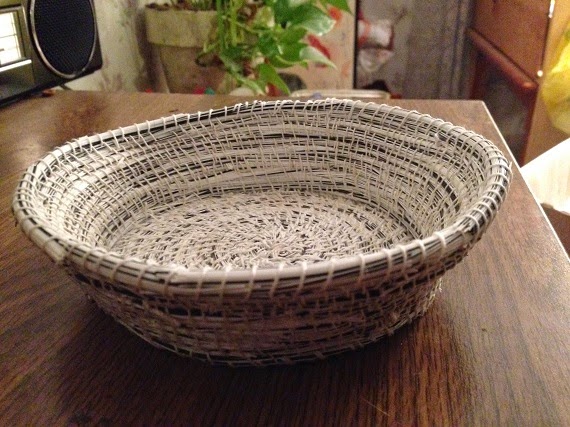 I finally finished my broom bristle basket. I'd only been working on this thing since summer of 2013. For having worked on it that long, it really should be MUCH larger than it is! It measures about 5 inches across and all of 2 inches deep. I am going to start another one of these baskets. This one took so long to make because it hurt the old hands something awful to sew too many rows in one setting. It also was not easy working with the broom bristles. This is the first coiled basket I had ever made with multiple strands to sew together. This one is made exactly the same way pine needle baskets are made. I have never made a pine needle basket but I think pine needles would be way easier to work with than broom bristles! The next one will probably take just as long to finish as this one!
I didn't even put a dent in my supply of black and white broom bristles! I haven't figured out anything else to make out of them. I'm thinking about trying to weave some of them into something or another....They'd make great cat whiskers....

I made a few tree magnets yesterday. 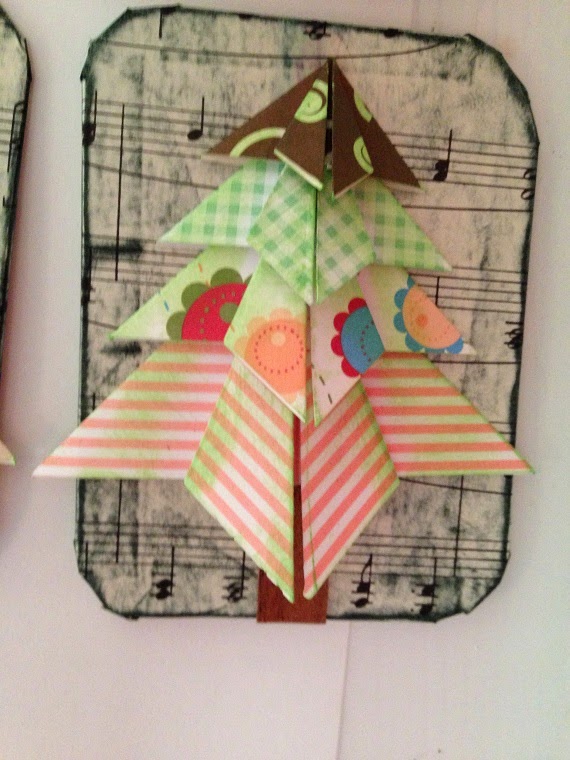 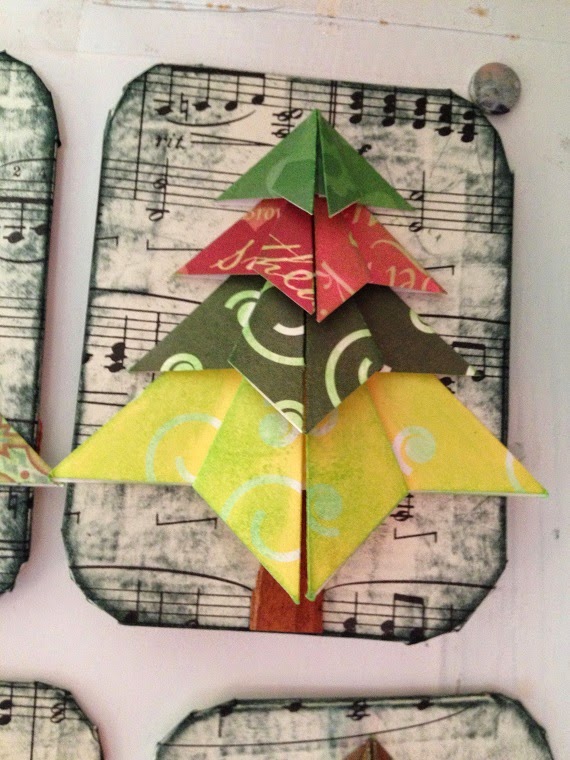 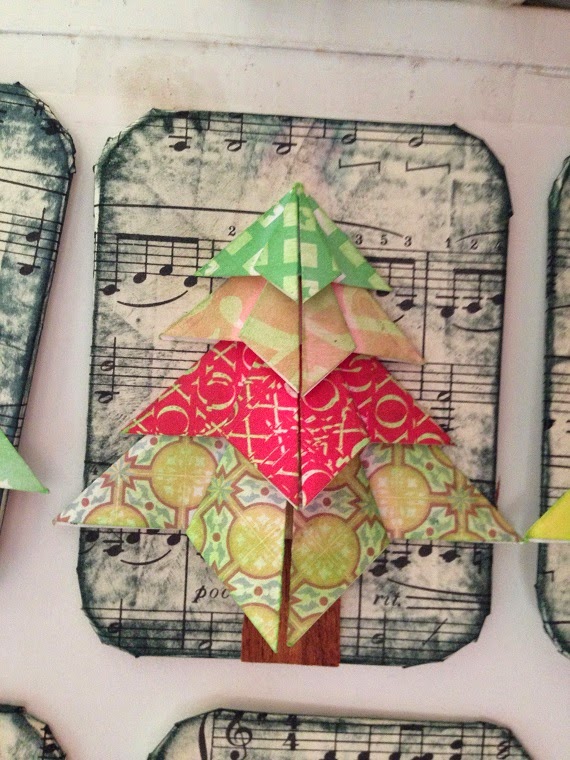 Scrapbooking paper folded into tree shapes from this tutorial. 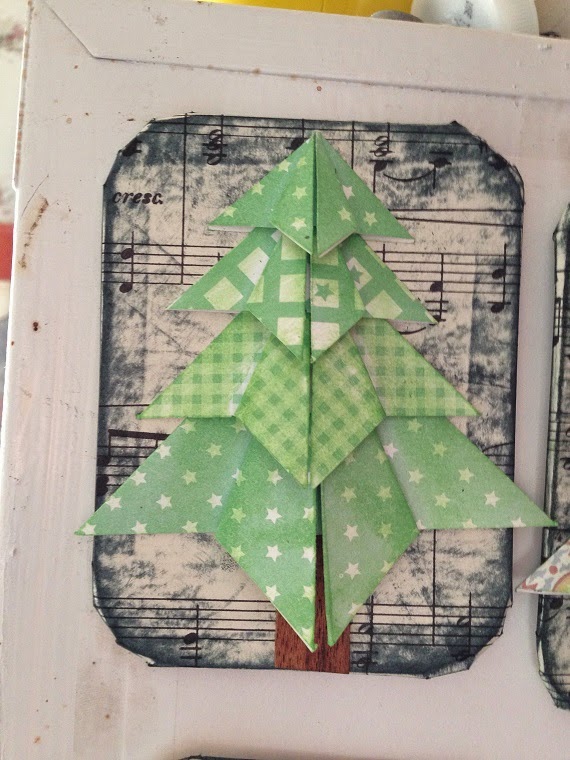 Cellophane tape...the stuff you use to wrap gifts. 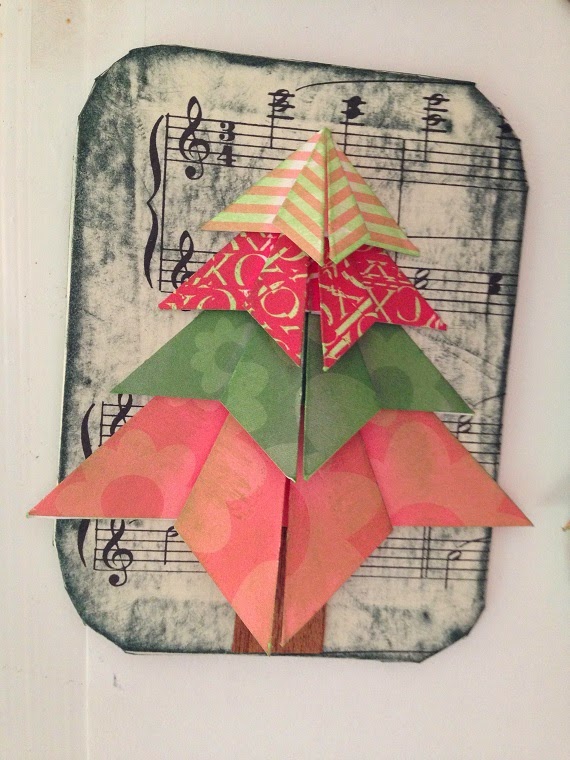 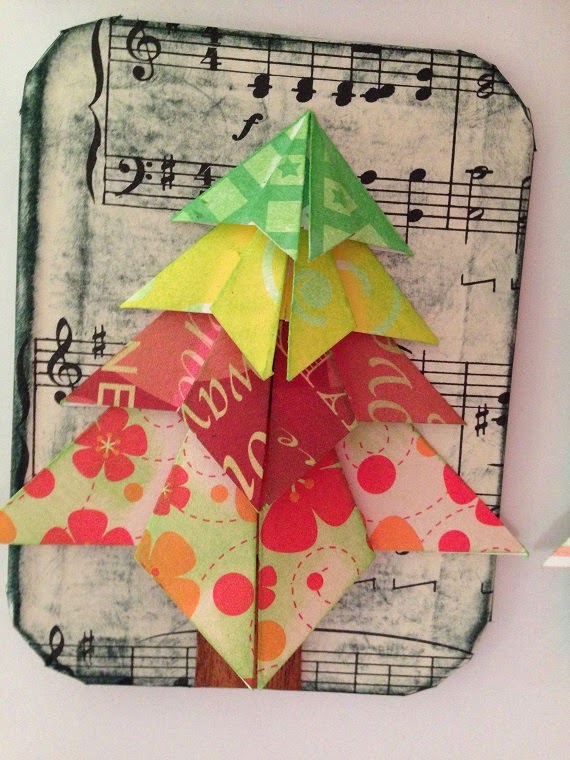 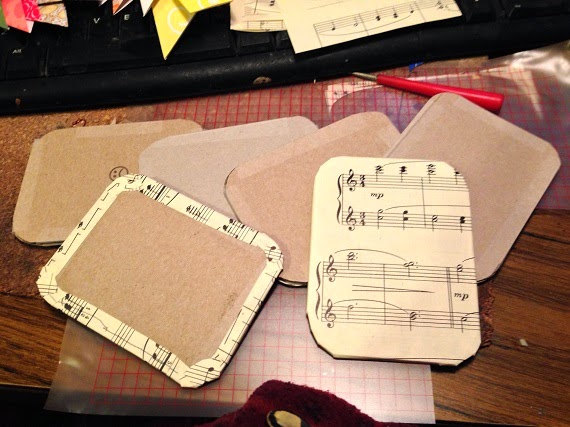 This is what the backs look like. I cut four rectangles (3x4 inches) for each tree. They're taped together with cellophane tape. The sheet music is glued to the chipboard with glue stick. I cut the tree trunk from wood veneer and glued it to the back with quick drying glue. Any glue would work. I was in a hurry. The trees were inked with the green stamp pad and the sheet music with the black.
The tutorial shows these trees being made into tree ornaments for Christmas. Mine aren't so Christmas-y. And mine are magnets.
I'm thinking to make more trees but instead of rectangular backings, I'll cut them tree shape and but an origami tree on both sides to make it into an ornament!

The reason for all the magnets is because I let out my frustrations on about 60 magnetic clips to harvest their magnets day before yesterday.
I really don't have a lot of frustration in my life. I take most things in stride and totally ignore a whole lot of things that would bring others frustration. I do like going out in the garage and smashing things. There is something liberating about destroying things! My right arm was killing me the next day though. That six pound sledge hammer I use to hit those plastic clips with gives me a really good workout! One that lasts till I need more magnets in a couple months!

I have no idea where I saw this idea. I was surfing the web, somewhere.... 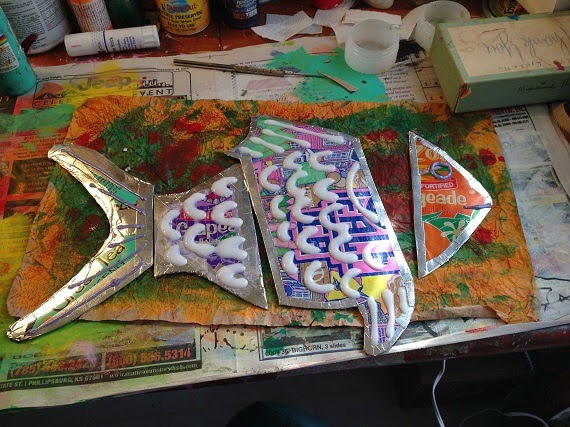 Yard Art!
This fish is made out of a cereal box, three aluminum cans, a bit of puff paint (that's glue in the picture above, but that didn't work out well) and silver foil tape. I thought about leaving the graphics showing from the aluminum but I decided I liked it better all silver. All those layers make the fish quite thick and sturdy to withstand wind. Foil tape makes it waterproof. 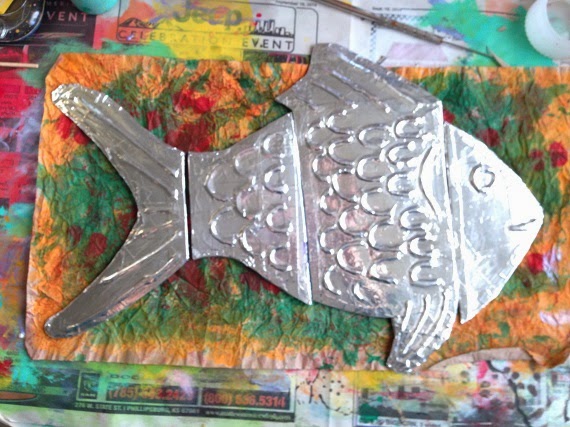 Once the foil tape is burnished over the puff paint, all the details really pop.
The fish is about 12 inches from tail to nose and about 8 inches top to bottom. There isn't a pattern for my fishes. Each one was free hand drawn on the cereal box. I cut two fish from each box, taped them together sandwiched between aluminum with the foil tape. Then I free handed the puff paint, let it dry and covered the whole thing with foil tape.
This is the second of these fishes. It still needs eyelet holes punched and chain attached to hang the bugger. 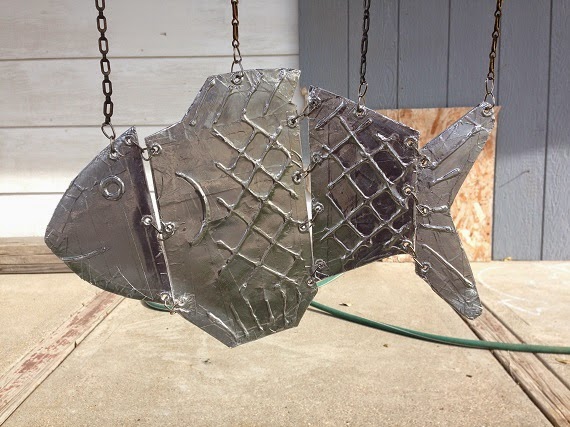 I hung this one from the west porch railing to take its picture. This brass chain didn't work out so well....I need to shorten and rearrange just a tad to make the fish hang properly. The second fish will have some silver colored chain that was originally meant to hand a florescent light fixture. He's supposed to sway in the breeze as though he's swimming through water. It was breezy when I hung on the railing and he does look like he's swimming!
The second fish (the one in the first two pictures) I will be giving to my Mom. I will probably make more fish again too. 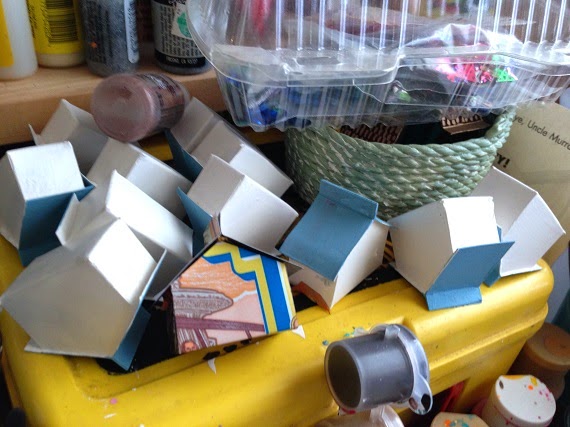 My little house are still unfinished. It appears as though a big wind came along and scattered them willy nilly but I'm guessing it was a cat that knocked them askew! Murray cat is notorious for wandering all over my work space just to see what is there and so she can sample the paint water! One day these little houses will be finished! 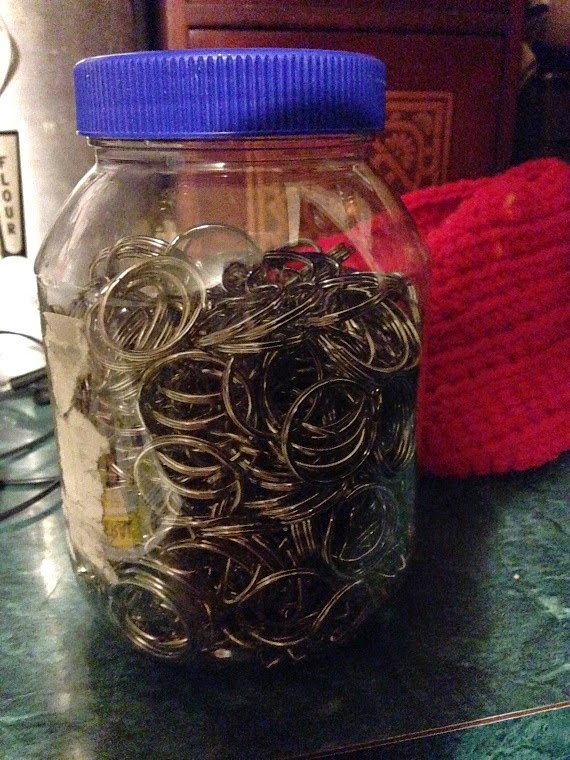 While out in the burnt house retrieving magnetic clips to destroy, I discovered the gazillion key rings out there. Ma helped me take the rings off a bunch of them. These rings will eventually turn into a basket. That's a quart mayo jar they are in. I didn't count them but I'm guessing there are more than enough in there to make another basket as large as the last basket made from the rings.
I also saved the jump rings from the key rings. I used some of those to put the wind fish together.

I'm working on some dotee doll magnets, a wooden basket (an experiment I conjured up when I found a brown paper sack full of wooden ice cream spoons), and a bunch of other stuff. If you've read this blog for any time at all, you should know I always have something in the works!

I leave you with a spider whose days are numbered and counting down fast! 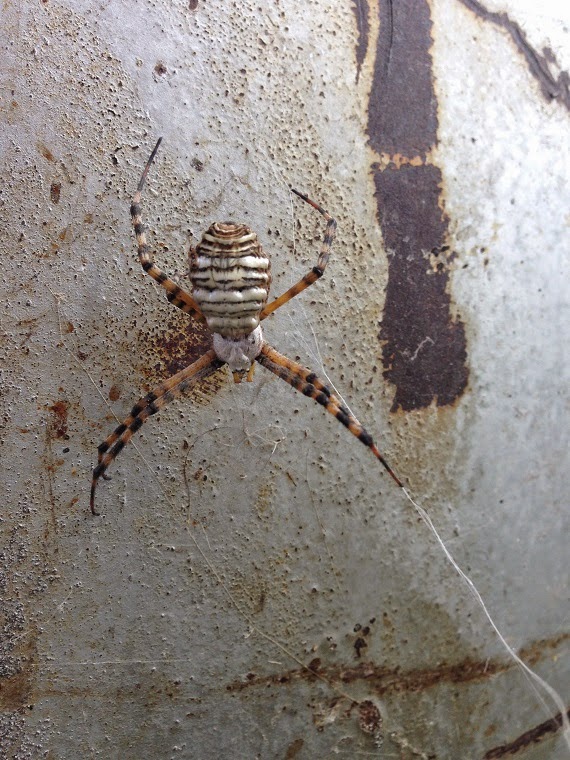 This guy has two buddies (that look remarkably the same as he does,) hanging out in the flower bed with him. I think this one is a male. The other two, that I didn't get pictures of, are females. This one has built a sloppy web in the space between the ground and the lower part of the propane tank. He's a lot smaller than the one I found in the garden cart yesterday morning and the one that took up residence on the west porch railing about a month ago. She has a beautiful orb web woven between two posts on the railing. I love garden spiders! These guys are harmless. The one in the picture has a leg span of about two inches. The other two were a good half inch bigger than this one.
My youngest son and his wife were this afternoon. Lue has no love for spiders at all. Both my daughters in law are afraid of spiders! She said, "There's a giant ugly spider on the porch railing!" She shuddered (while I chuckled) when I told her there two more of them out there! She would have freaked out royally if she'd been around when I moved the latest one to appear, from the garden cart to the flower bed near the other two.
I think spiders are gorgeous creatures!

Guess that's it for me today.
Remember to be good to one another!
It matters!
Peace
831

The broom basket is so beautiful. I love the colors in it.

The skulls are fun, but I really do like your little Willy Nilly neighborhood of houses! LOL!

Your fish looks cool shiney, but if you liked the distressed look, perhaps some kind of watered down paint treatment that you can rub in and wipe away the excess. It might make the texture pop more.

I saw a thing on Pinterest that was really neat for spider webs. The person took black card stock and sprayed some kind of tacky adhesive on it. They went to a spider web and slowly let the wed settle on to the paper. They cut out the paper into their desired shape and placed it into a bezel. They filled the bezel with resin and used the piece as jewelry. perhaps you could try this with one of your magnets....since your outside with the spiders anyways! LOL!