The Bachelor Pad, Some Skulls, Some other Art and the End of Soybean Updates

Hello Readers!
Not a lot to show today, but maybe a lot to say....
The old body is still in rebel mode and I usually feel like something the cat dragged in. The changing of the seasons, cold creeping in and my sleep pattern (or lack thereof) is causing me some discomfort. I either sleep too much or not enough. No happy medium to it. And the old body hurts from head to toe in one degree or another all the time.
I will live! And try not to complain about it too much. Complaining doesn't change a thing and only makes folks wish I would just shut up about it already!

I have company this week for a few days. Brother John showed up last evening. He's staying out in the bachelor pad so I won't see a lot of the boy. He's come up for a few days to go bow hunting for deer. He had his binoculars out this morning, checking out the tree line on the far side of the soybean field for deer. That isn't his hunting ground though. He'll be headed east about 8 miles to the Diversion Dam to set up his tree stand and see what comes along.

I had a bit of a scare this morning when I got up around six. The toilet wouldn't flush. No water in the house! I've had more than my fair share of water problems over the last couple years and being without water is a terrifying thought to me cause I don't have the money to fix it if goes out again! I didn't really panic though. I knew Brother was the cause of the water not working! So I grabbed my cane and hobbled my old body out to the garage and fixed it. Brother was standing in the yard, looking through his binoculars to the tree line on the other side of the soybeans. He unintentionally shut it off while trying to get the bachelor pad's lights on last night. It was fixed in nothing flat there's not a thing wrong with the well pump. Water's flowing fine! Thank Goodness!

The bachelor pad is an old camper caravan that's attached to the side of the burnt house. Looks like this from my front door. 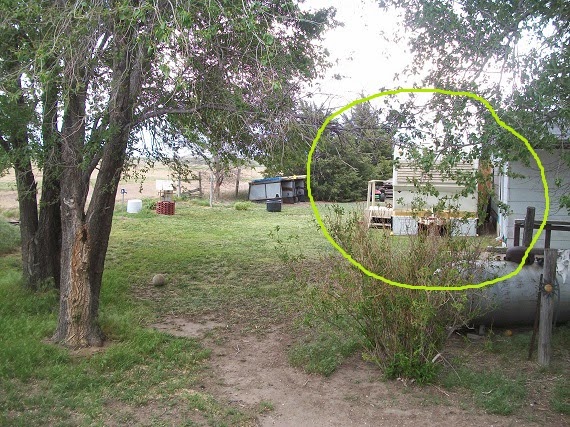 It's a nice little set up. Pretty much like a cheap motel room without a proper bathroom. They just come use mine when the need arises. We are talking about boys here, so you all know that big evergreen tree back there has gotten its share of watering!
I had coffee with the boy on my front porch. He provided the first cup of coffee. That was nice. Didn't have to make my first cup! That never happens!!! We threw the ball for that fool dog, Fred. He was adamant someone should throw it for him and John nor I could hear the other talk over Fred's insistence.
Fred was in fine form this morning! He slept the entire night and never once asked to go out! I got a long, uninterrupted snooze in the dark for once!
I call my brother, boy, but in reality...he's a grown man of 40some years. I refer to most men, as 'the boy'. I've always been this way.

I was sitting in front of my computer watching documentaries about serial killers yesterday, minding my own business when sister Jeanny called me. I had to turn off the serial killers for the time being cause I can't talk and watch videos at the same time. I decided I would continue with my sewing while I talked to sis.

I'm a little late in starting this project but skulls have been on the muse's mind for awhile now and I'm just getting around to moving on that notion. 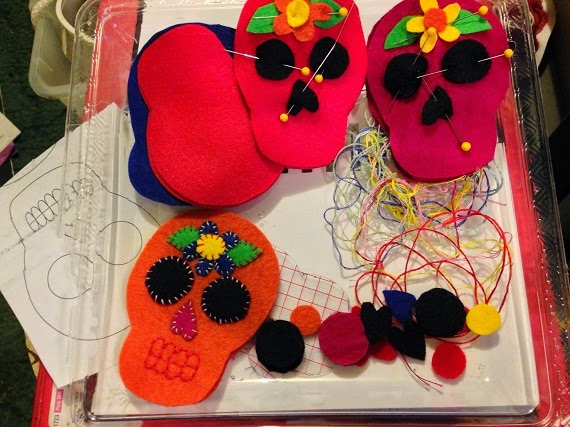 I found the template online here. 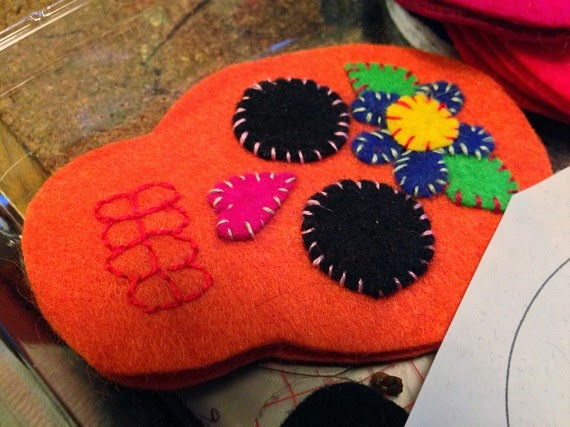 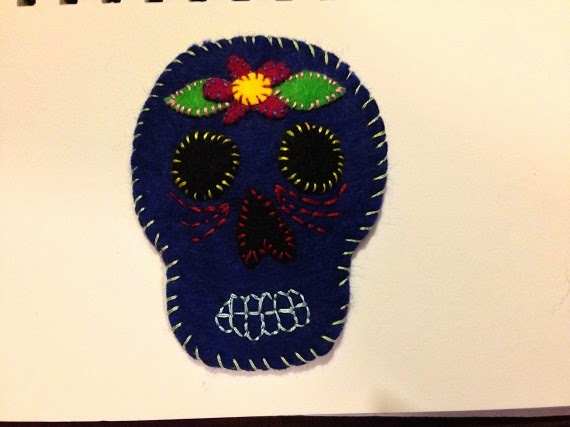 The tutorial is for a sachet but I put a magnet inside of mine instead. They're about three inches tall or so. I freehand embroidered the teeth and the lines under the eyes. Teeth are tricky to freehand! I cut out enough pieces for 8 of these. Sewing is on my agenda today after I've had my coffee and once the dishes are done.

I'm still working on little houses. The chipboard houses are not finished. They're sitting there on the kitchen table still with white walls and blue roofs. 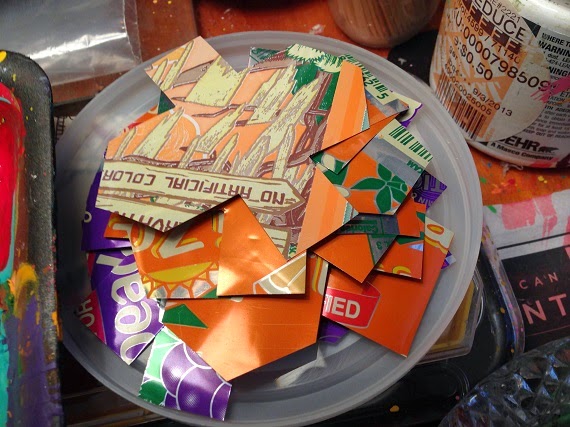 I cut a bunch of house templates out of aluminum tea cans. 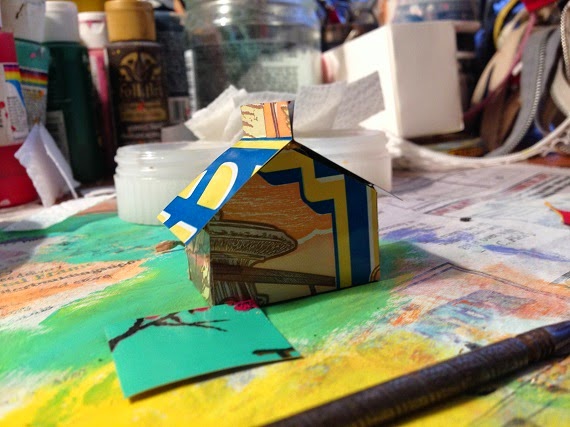 This is the only one that is complete. I glued it together with hot glue. Aluminum is not as forgiving as chipboard and there are gaps between the roof and bottom of the house. 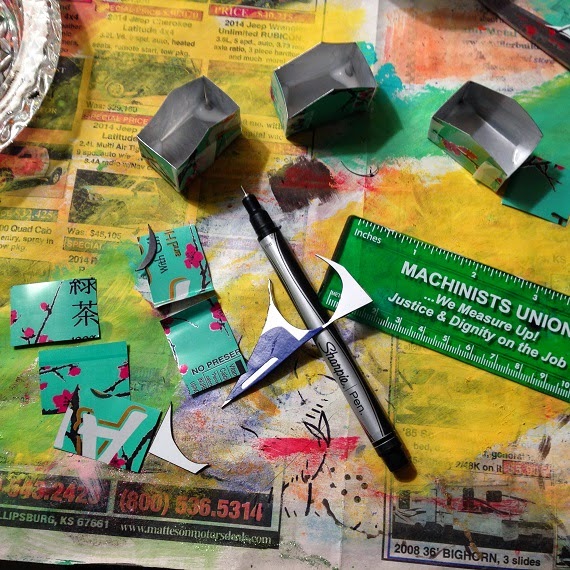 These guys are glued together with tacky glue. It took them days to dry enough to take the tape off of them. 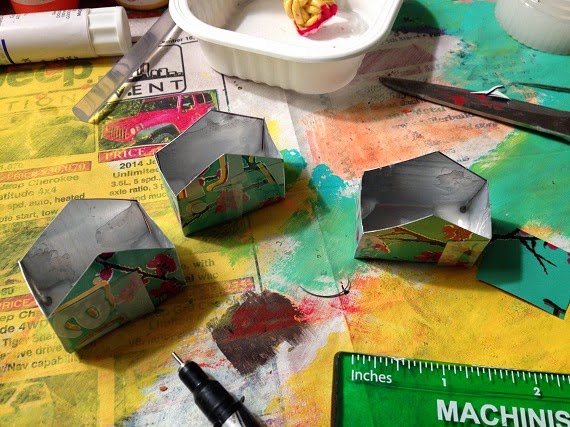 I had trouble with the roofs on these aluminum ones too. If you bend the roof pieces too tightly, they snap apart and are useless as a roof piece then. I'll put the rest of the houses cut together but I don't think I'll be making more aluminum houses than that. I'm going to leave these with the graphics showing. 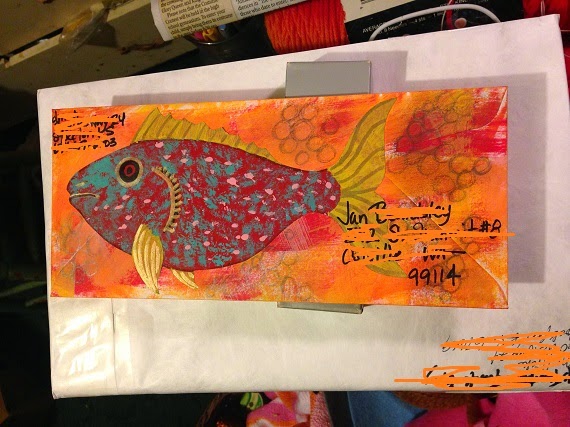 I sent out another fish in a fish envelope. No picture of the fish inside. I don't even remember which fish it was to be honest! You all have seen the fish inside before anyway. 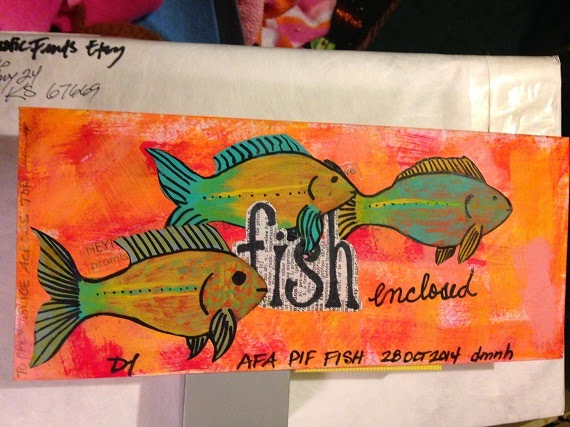 Here's the backside of the envelope.
I don't know why I like painting fishes so much. I'm a Taurus. We are land people! I don't even know how to swim! I am not fond of water at all. Yet I do love painting fishes! 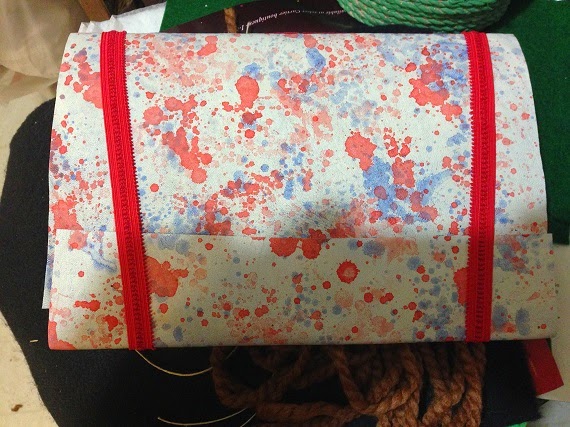 Here's the leather covered sketch journal I forgot to take a picture of for the last post. It has 20 sheets of drawing paper in it. The red straps are underwear elastic. Never used underwear elastic. I have a ton of this stuff in six or so different colors. I tried crocheting that elastic but it didn't go well. This is the first project I've really used the elastic on since I got it last summer.

I still have a BUNCH of that white leather left and it will be used for book covers eventually. I really need to make more books. My supply of those is running quite low! The gift shop will be wanting more books in the spring. 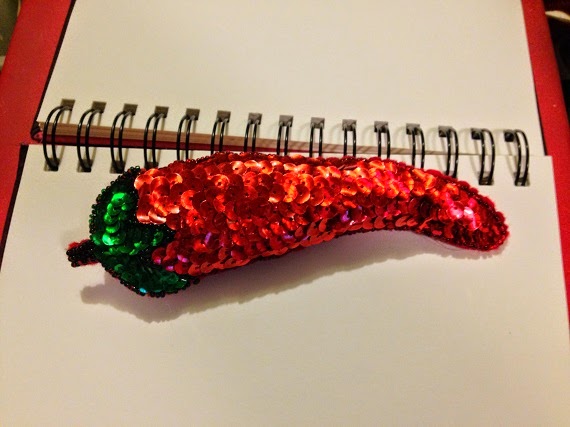 I made this thing a few days ago. It's a sequined patch. I cut a backing from red felt, sewed it together, stuffed it with fiberfil and called it an ornament. I still need to add a hanger to it. It's about 5 inches long or so. I didn't make the patch. 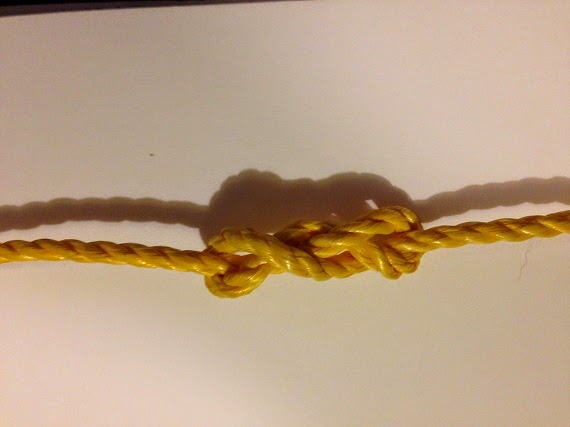 I learned how to tie a new knot a few days ago. Once again, I forgot to save the tutorial. There is no way I could figure this knot out again without the tutorial!  I'm going to turn this knotted length of polyrope into a bracelet for my niece. 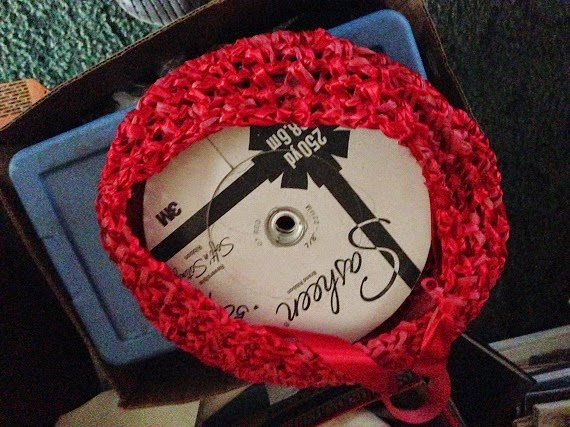 The red ribbon tote/basket (not sure which it is just yet) is coming along slowly.

I have other things in the works.....I'm still playing with the origami butterflies. I have some star shaped magnets in the works being painted with fingernail polish. There are paper mache birds on the kitchen table that have been waiting for legs for almost two years. And the zippers are still strung all over the kitchen table as well. Never a dull moment at my house! Or at least never an idle moment.

While having coffee on the front porch, brother and I discussed that soybean field to the north. He says they will not cut the rest of the field because there are no beans in the middle of that field. Apparently it wasn't a very good crop!
Unless something does happen with that field, this will be the last you'll hear of the soybeans for this year!
Here is what the field has looked like over the last week: 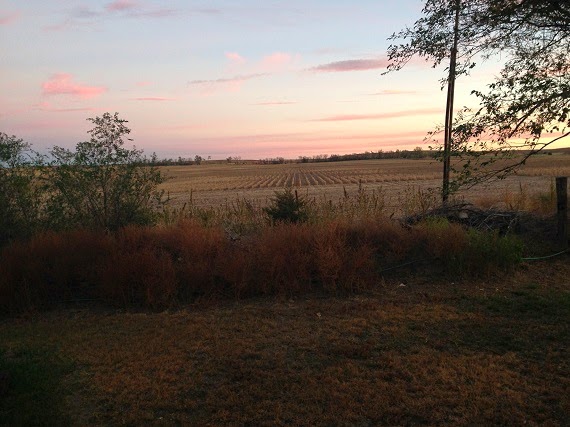 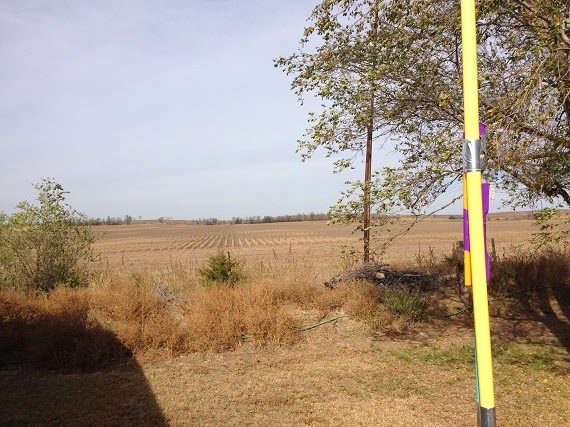 2 November 2014
Brother says the middle of the field has no beans on the plants. It doesn't show well in the pictures but the middle of the field is a different color than the edges. I'm betting we won't have soybeans in this field next year. Brother says the farmer will probably not plow this under till spring when he decides what he will plant in the field. I'm really hoping it will sunflowers! He's never planted them there before but then he'd not planted soybeans before either. I'm thinking he's being adventurous in his farming practices. I'm going to keep my fingers crossed for sunflowers!

Dang, you might sleep a lot, but you also do a whole lot more than I do on crafts.

...Sunflowers would be cool!