Works in Progress and Some Finished Stuff

I promised I'd show you a few things I couldn't show you in the last post because I hadn't taken pictures yet. You'll get to see those things later in this post.
First off we have a bunch of altered envelopes. I put out a call for takers of some plastic doilies I had laying around, taking up space and all seven of them were claimed by folks in the altered envie group so I figured what the heck, we'll just jazz up some envies to send them in! 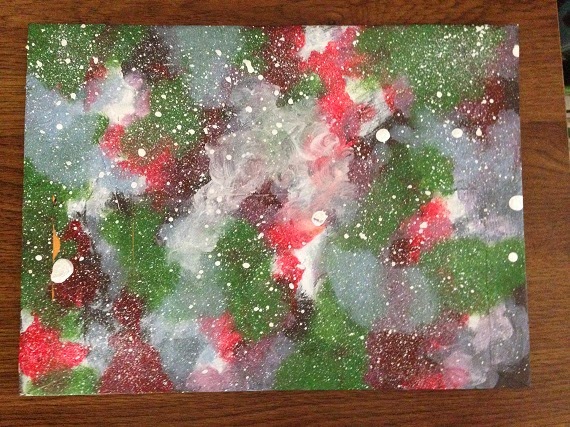 This is another attempt at the galaxy print painting. 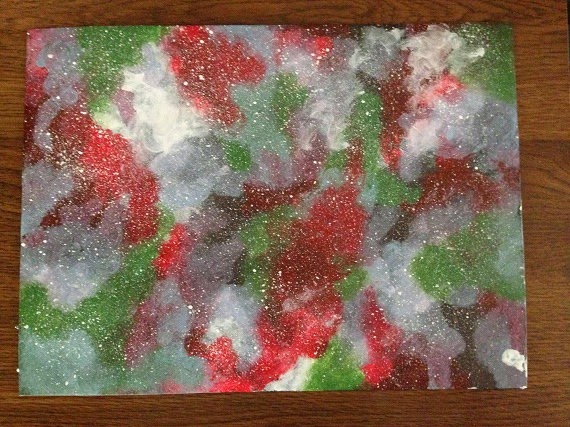 I still don't know how to make good galaxies!
This is a 9x12 manila envelope. 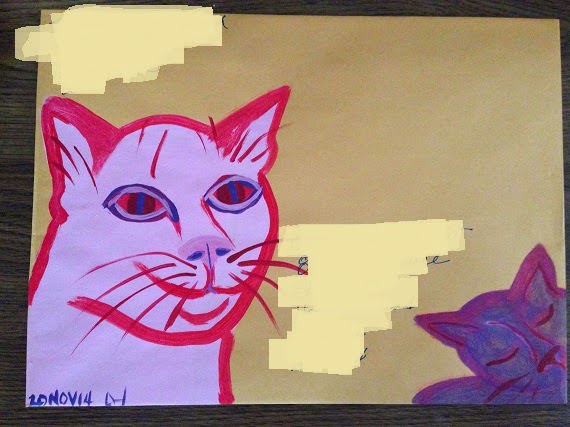 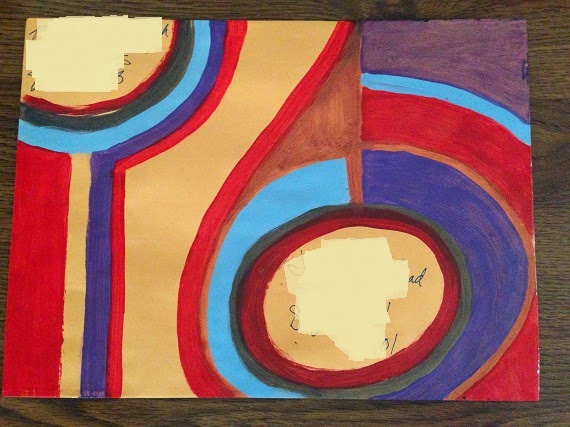 This is the frontside 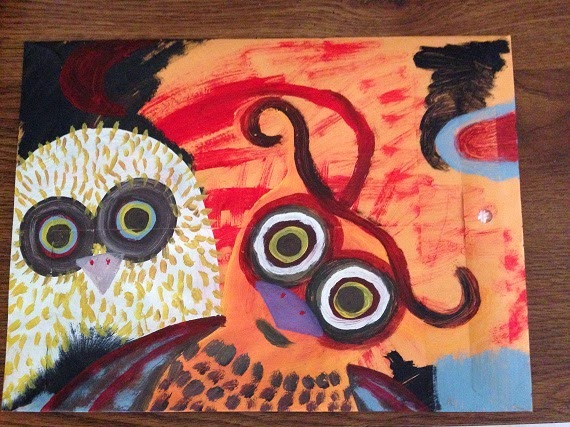 and this is the backside. Again, a 9x12 manila envelope. 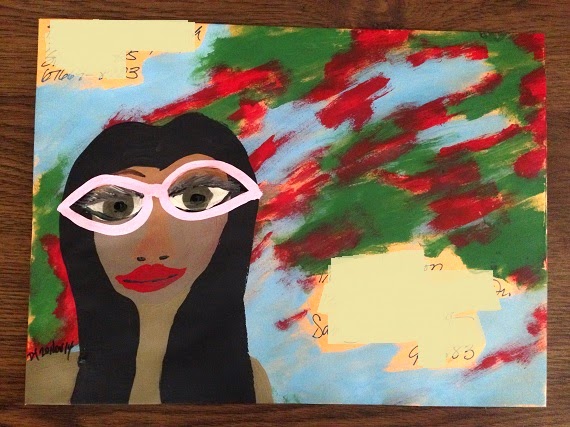 This is the front side. Her eyeglasses have dimensional magic for lenses. Doesn't show up at all in the photo, but looks pretty cool in hand! 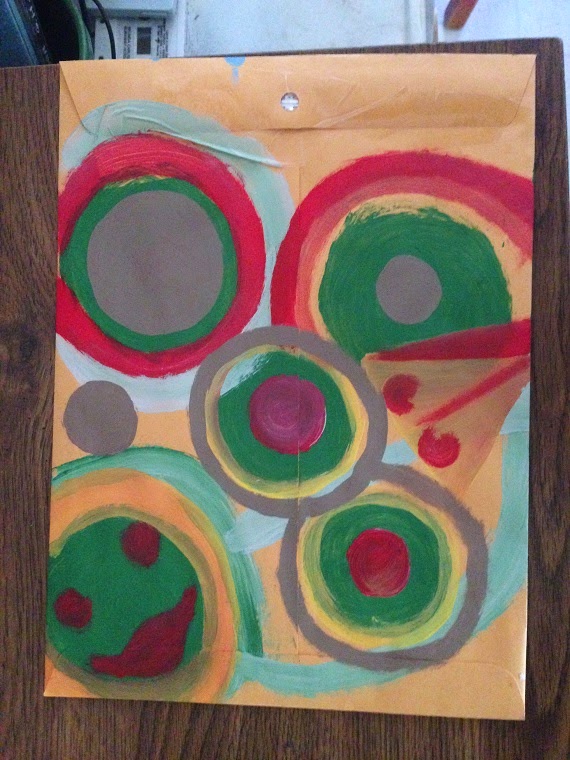 And this is the backside of the girl with the pink cateye glasses. 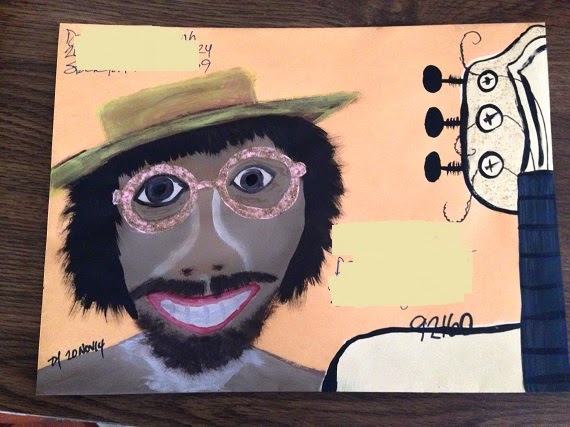 This fella's glasses also have dimensional magic for lenses. He reminds me of my old, friend, Doug....wild and crazy. May he rest in peace always. Man's been gone for about 27 years or so. This one is also a 9x12 manila envelope. 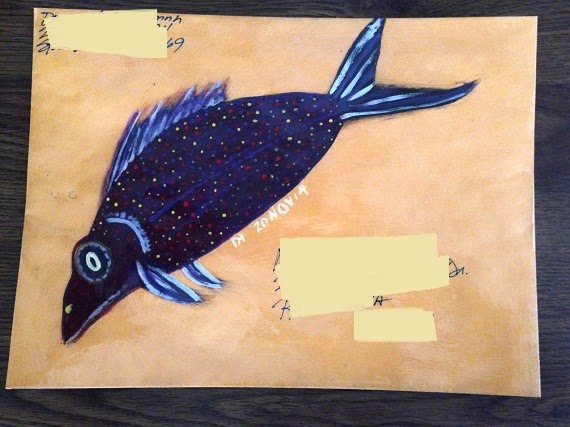 A fish for Mel! I originally put dimensional magic only on the fish, but I was way heavy handed with it and it was pooling outside the lines of the fish so I just spread it all over the front side of this 9x 12 manila envelope and called it good. Sorry, Mel. Your envie is a mess up! I do love that fish though! 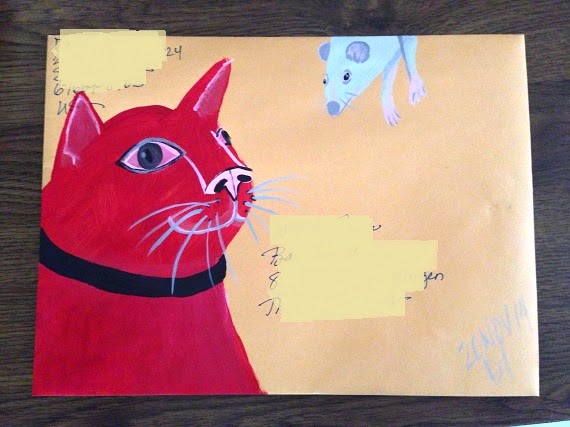 Unfortunately the postal meter strip that went on this envelope covered up a tiny part of the mouse at the top. Another 9 x 12 manila envelope with a doily in it. 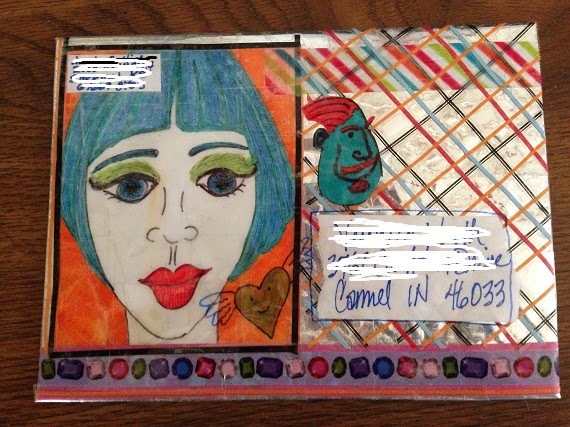 This is the front side of the envelope I made for my November partner in the envie group. I did make this envelope from the start! I usually just use a ready made envelope and pretty it up. This time we started from scratch with a mylar bag that chocolates came in. I've already eaten all the chocolates except for a few of the caramels. I drew the faces on separate pieces of paper and colored them with markers. They are taped to the mylar envelope. 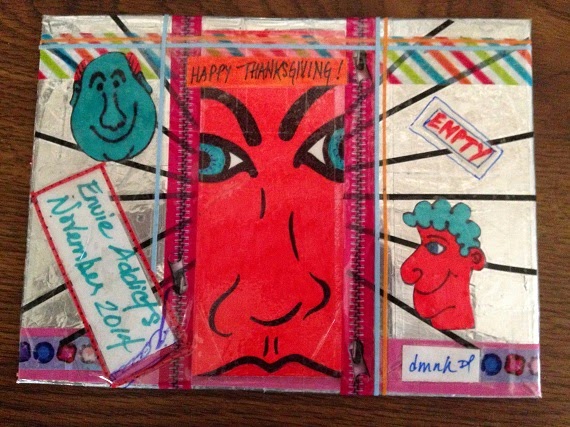 There is a lot of tape on this envelope! A lot of it! All those lines are drafter's tape...the skinny lines. The rest of the lines are tape as well.  It says it is empty but it does have some chipboard inside to stiffen it up.  My partner likes the colors orange and teal together so that's the reasoning behind the color scheme. 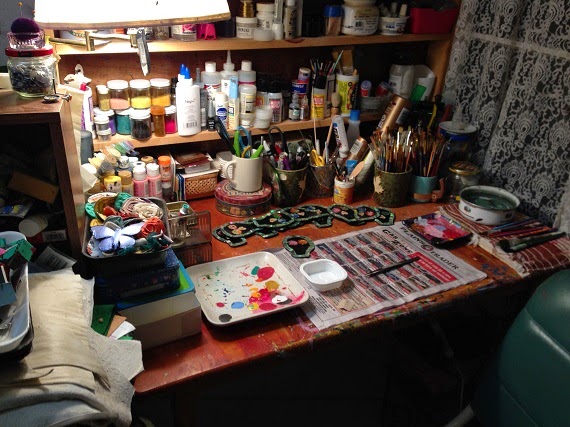 I unearthed these guys when I cleaned off the table. The fish needs a paint job and the four little paper mache birds need some wire legs. And that dish they are sitting in needs to find a new home! 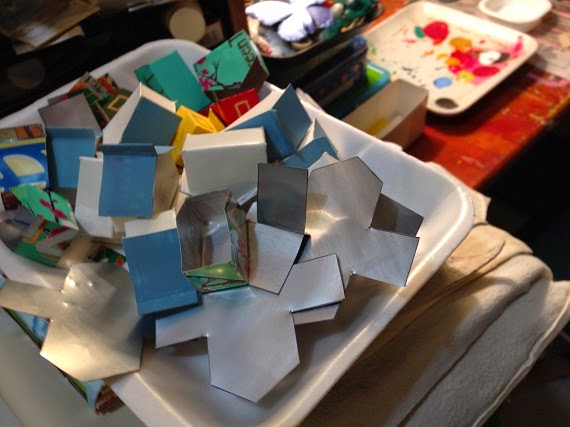 The little houses have been moved off the table to a dish of their own, waiting on me to do something with them! I cut out some doors and windows for them last night. I used aluminum for that. I don't know if the doors and windows will actually be aluminum or not. These little houses are truly a work in progress! I'm wanting to Christmas them up a bit and use them as ornaments. I'm thinking the aluminum houses will never materialize into houses. Not by me anyway. We shall see what happens. 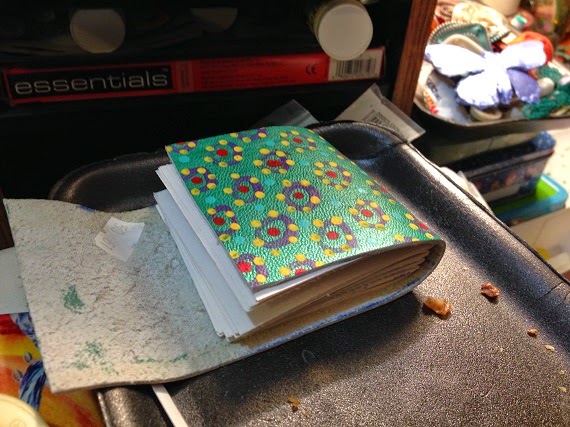 This is the little book I sewed together at my son's house last week. I still need to add a button closure to it before I can call it done. I have good sized bright yellow plastic button that I will be using for the closure. Just have to locate that button, cut a slit and sew the button on!

While I was cleaning off the kitchen table, I was putting little things into a jar. Little things that I knew would come in handy for a mixed media work. 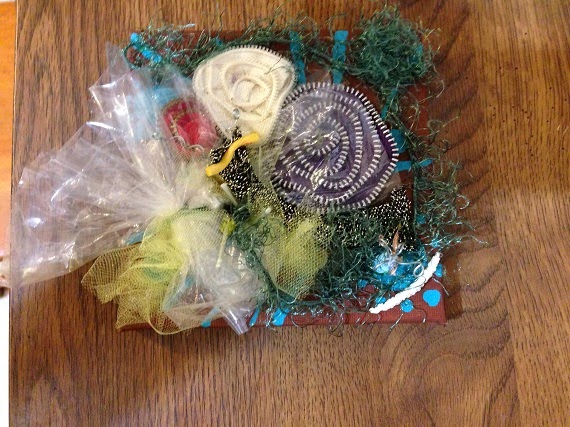 That blue and brown 4x4 inch canvas has been sitting on the shelf in the kitchen for ages, waiting for me to do something with it! I took all those little bits and bobs and put them on this canvas. I made the white rose out of some remnants of zipper that weren't long enough for much. The red rose was made the same. I took the purple rose out of the pile of already made zipper roses. There's some yellow tulle there from the bumble bees I made a few weeks ago. A couple of ends of plastic bags that I was saving for a fish picture, some green eyelash yarn leftover from the ugly mermaid from a few weeks back and some other crap that was running rampant amongst the cups and boxes holding all my tools on the table. 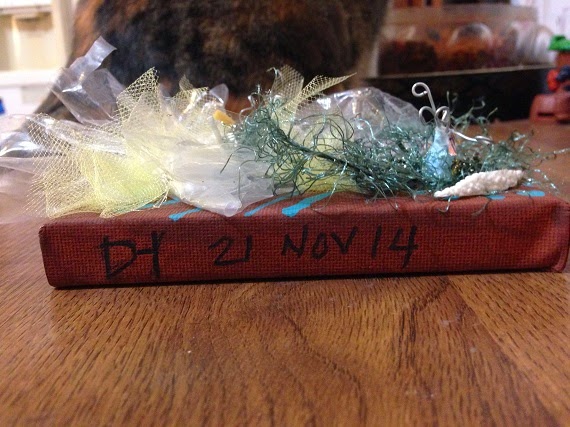 I like it! Not sure what the heck I'm going to do with it, but I do like it! I might put it on the wall in my bedroom. 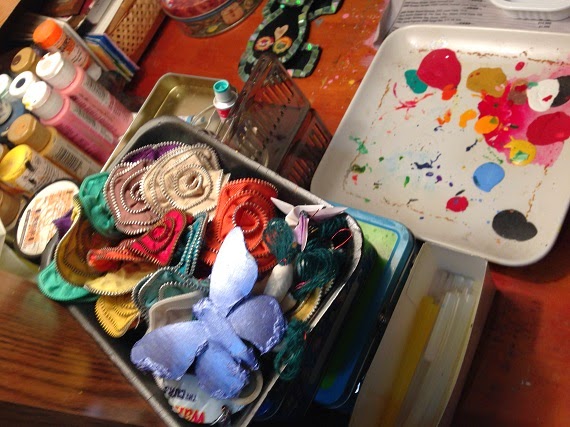 And more works in progress....that paper mache butterfly has been on that table for better than a year. And you all have seen those zipper roses more often than you care to remember! I'm going to get those roses off my table and done in the next few days. 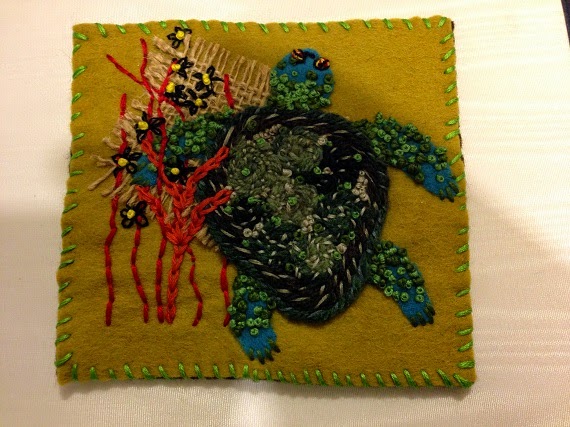 This is one of the mug rugs I did while at my son's house last week. SOrry about the horrible picture! 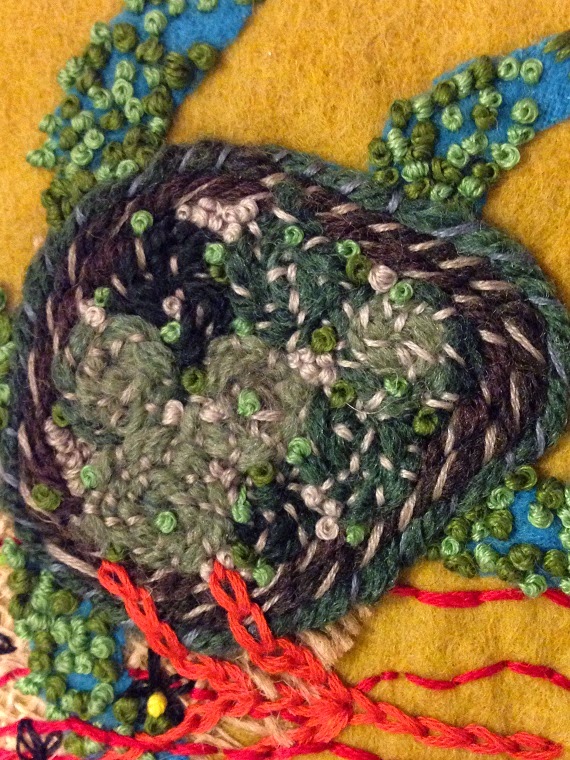 Here's a close up of the stitching. It has crouching, chain stitches and french knots mostly. I do love doing french knots! I really like how this little 4 x 4 (roughly...I never measure when making mug rugs) turned out. 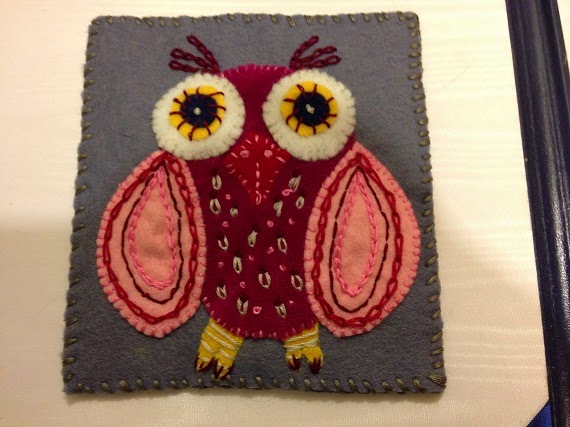 This is the other owl mug rug I made last week. 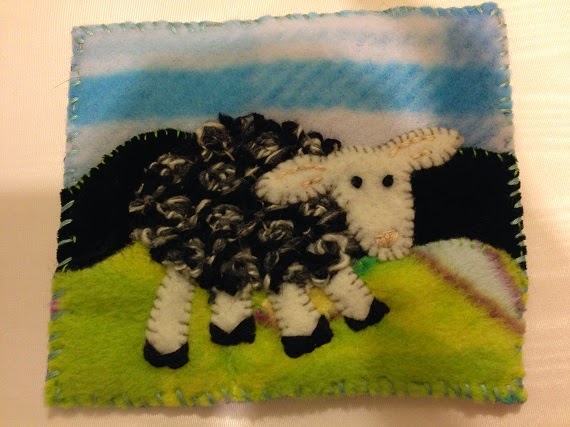 And lastly on the mug rugs, is the second sheep I did. I sent this one off the Oregon yesterday. 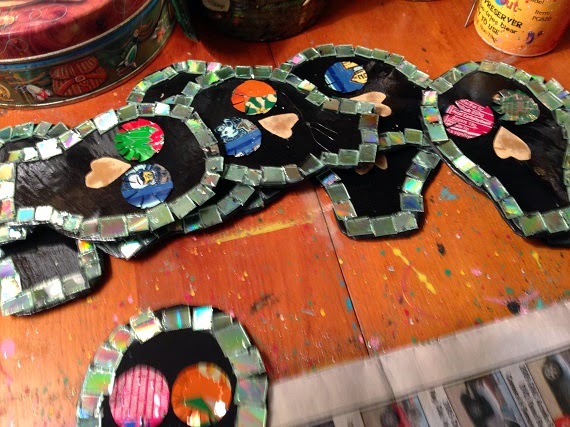 At the moment this is what is all over the kitchen table. I haven't decided if they will be ornaments or magnets. I'll show these off and tell you how they're made in the next post!

Stay warm! Thanks for hanging around till the end!
Remember...
Be good to one another!
It matters!
Peace
831

Ooh, I luv my Envie! Thank you! Sheesh lady, you do so much crafts!