The Muse Has Returned and The Farmer Planted the Field

Long time, no see!  I've been around, just haven't had much to show you all.
this post will be filled with many fishes, some rugs and the tale of the planting of the field  continues from the last post. I made that last post on the 26th of May so it has been a little while.

We'll start off with arts and crafts before we delve back into the planting of the field. Better get a cuppa something and settle in. It might a long one.

I started (and finished) some rugs out of the fabric yarn I showed off in the last post. 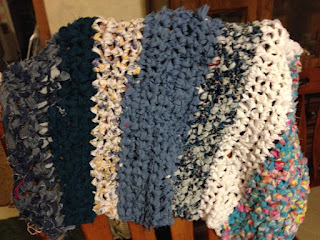 These rug pictures are in backwards order. This is the third rug made with the Q size hook. It's about 30 inches long and 30 inches wide. It isn't exactly square, but close. None of the rugs crocheted up nice and square. This one is made from all cotton materials from a couple of blouses and 4 and quarter dresses.   The other 3/4 of that dress is in the second rug. 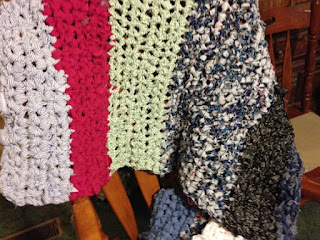 This is the second rug. It's about 3.5 feet long and 30 inches or so wide. It is made from cotton material also. This one the material came from 5 dresses. I used most of the dress from the first rug in this one. Can't really tell but all of the fabric in these stripes have patterns on them. 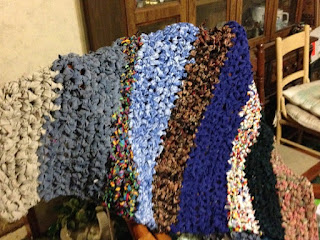 This is the first one I crocheted with the Q crochet hook. It's about 4feet long and 30 inches wide. I didn't actually measure any of the rugs. This one is made from cotton material from 4 (and a half) dresses and 2 blouses.

The rugs kept getting smaller and smaller.... 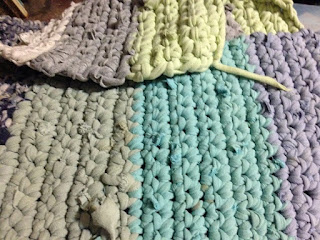 This is rug number four. It is made entirely of t-shirt material. Not all the garments used to make this yarn were t-shirts. There were some long pants and capri pants in that bunch as well. I'm still working on this one. One more ball of t-shirt yarn left to put on it. This one was crocheted with the size N steel hook.

Day before yesterday I was fast asleep in my bed at 3 o'clock in the afternoon when my son and his wife paid a visit. I never laid eyes on either of them but I talked to the boy for a minute or two. Can't remember what he wanted. I think he was telling me about my new front porch steps but I'm not sure. When I finally woke up around 9ish or so that evening I found this box sitting in my livingroom. 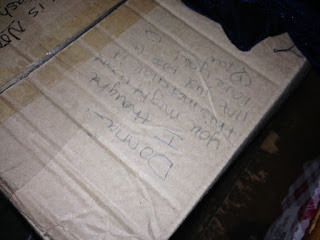 The note written on the box says: Donna I thought you might want this material. If not just toss it. Love you. Lue. Lue is my daughter-in-law. 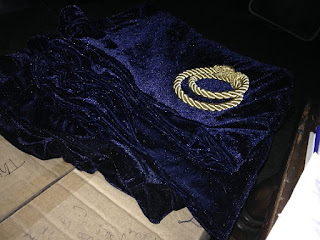 The box is filled with velvet. Most of it is clothing that has been cut in one way or another and there was one large piece of chocolate brown velvet ad this set of blue velvet curtains. LOTS of velvet to do something with! My brother brought me the gold rope curtain tie backs. There were three of those but my sister Susan came along and said she needed some curtain tie backs so I gave her the other two. I also told her how to make a vent cover so all the cold air from the A/C went out into the room instead of up behind the drapes!  She said I was a genius! :)
I have no clue what will happen with all that velvet. I had a stash of velvet...a large stash...when the house burnt 10 years ago. It was all lost. I've been collecting velvet since then but didn't have very much of it. I really want to make a crazy quilt from all that velvet but I haven't a clue how to make quilts. Something will be made from it eventually.

I promised you all lots of fishes in the title of this post so we ought to see some fishes.

I started another fish picture. I forget what number this one is really. But I think it's #16 so that's what we are calling it for now. 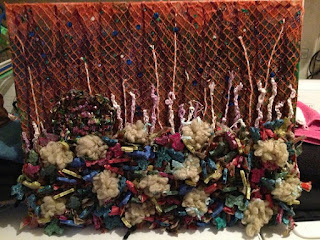 I started this thing ages ago....couple months ago anyway. This is a terrible picture! You get the idea though. Still lots to do on it. 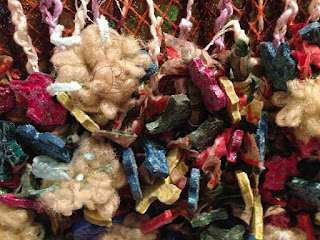 Here's a close up of the painted puzzle pieces and fluffs of weird yarn that were a failed experiment. Almost everything on this fish picture is either a failed experiment or something others wouldn't bother saving to use in artwork.
Those puzzle pieces would have been a bear to put together into the puzzle. I got the puzzle from Carrie's yard sale. It was made in the late 30s, early 40s, I'm guessing. Those puzzle pieces are about 3/8 of an inch thick. I painted them both sides with acrylics and then put glitter glue on them as well. 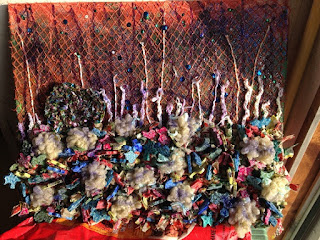 I got a box of art fodder from Ma the other day that included some fabric spray paint. Guess what Donna did with the purple fabric spray paint. That's right! She went against the instructions to use it on fabric and sprayed it all over her newest fish picture.  The big round thing at the left hand side of the picture is a chipboard cracker box cut into yarn (nothing is safe from being made into string) and I crocheted it into a round. I was actually trying to make a small basket out of that cardboard yarn but that's easier said than done so I chucked the cardboard crochet basket idea and said, hey! this will work great on the new fish picture.
This fish picture hasn't really been talking to me at all since I started it. I look at it numerous times a day just to see if it's gonna say anything. It's coming along slowly. I'll probably finish it in a flurry of ideas. I'm on a fish kick at the moment so fishes for this picture will probably be made soon. I may have already made them and not realized it.
You'll see what I mean here in a minute. 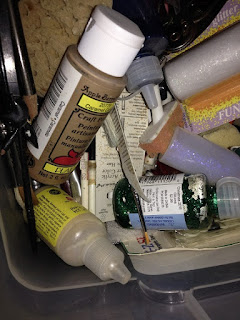 This is the box of art fodder Ma dropped off the other day. All kinds of stuff in there!
glittery paint, glitter glue, craft acrylics, 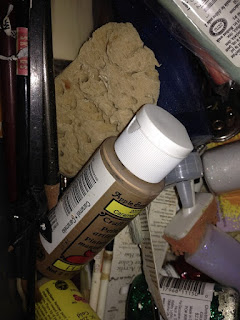 a sea sponge, some other sponges, 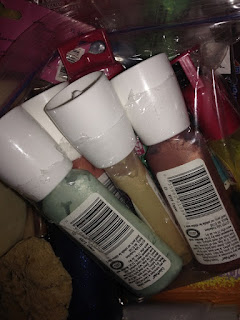 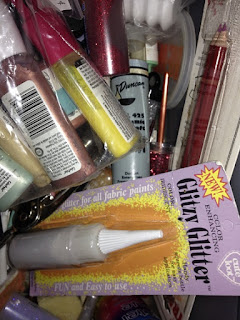 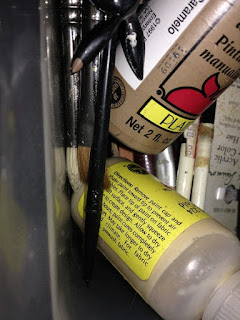 and lots and lots of paint brushes.
I needed the paint brushes. I'm terribly hard on my paint brushes! I try to keep certain ones for glue and gooey paint but I always break that rule and end up using one  of my better brushes for such and end up ruining them for painting.
I'll put this stuff to good use. 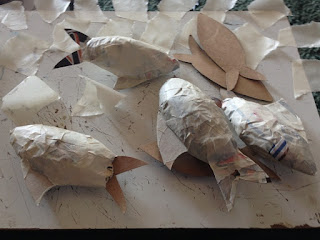 I entered a fish swap over at AFA. Open media, fishes no longer than 3-5 inches. These here fishes are right at 5 inches. They are a lot larger than they need to be. 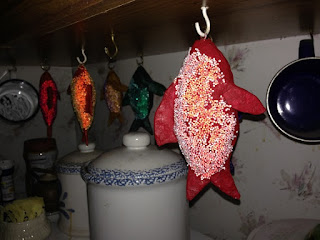 I forgot to take pictures of them in their plaster casts before I covered them in tissue paper and painted them all with acrylic ink and then gave them some bling with a coating of german glass beads. They don't really shine like that! That's the flash on the camera hitting those glass beads. I tried to match the color of the fish to his glass beads but that didn't work out so well with all of them. The red fish in front actually has pale pink beads and the brown fish has red beads. It all worked out in the end. 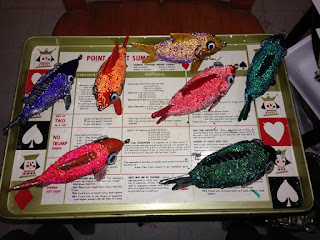 I painted the lines in their fins and tails with silver acrylic ink and gave them all some googly eyes held on with gray stained glass paint. (Kinda like dimensional paint. It came from a kit.) They're your run of the mill paper mache fishes that are entirely too big to be sent to California.
So I said well heck! I gotta make some different, smaller fish for the swap.
These came about: 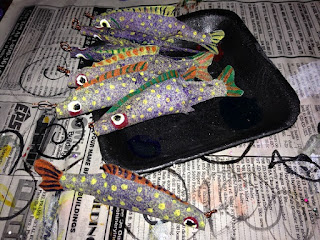 Miniature fish windsocks. Ma says they're just as cute as they can be! I'm rather enamored of them myself! They're the right size for the swap. But I wasn't satisfied, I needed to make more fish. 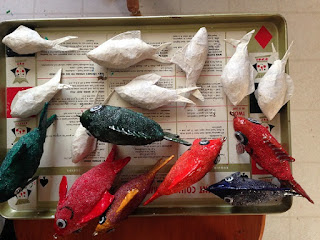 So I made another school of smaller paper mache fish. Eight of them instead of seven. I didn't mean to make eight of them but that's what happened. I'm thinking maybe...if they don't go to the swap, these newest fishes ...at least a few of them, will end up on my fish picture. They're the right size for it. They still need a few layers of tissue paper and a paint job. And I need to figure out a jump ring of some sort.
Anyway, fishes are on the radar hot and heavy!
More on fishes to come in the near future!

In the last post I showed you the activity in the field north of the house. 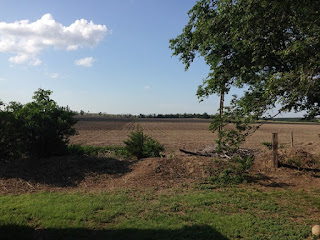 There are little green sprouts popping up all over this field on the 6th of June. They don't show up real good in the picture, but believe me, they are out there! 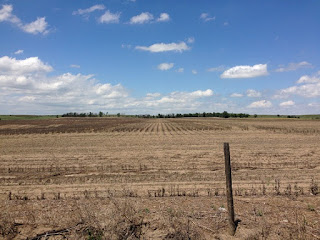 And on the 7th of June, the field has a tinge of green all over it. Still doesn't show too well in the picture but I swear those sprouts grew double their size from the day before! 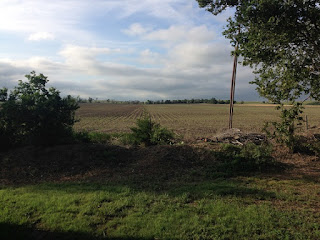 And on the 11th of June, the field is really greening up! I wish I could say those sprouts are sunflowers. But that is not the case, sadly. Those little sprouts are milo. I'll take a hike out to the field in the next few days and take a picture of the sprouts so you can see them. And we'll keep an eye on the milo field throughout the growing season. I could be wrong about those little sprouts being milo. They might be sorghum or some such thing. Guess we will all have to wait and see. 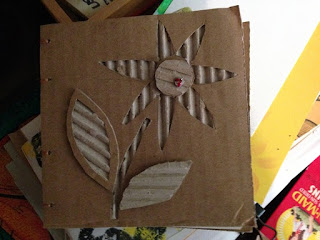 I forgot to show you all my newest cardboard book. This one is 6 inches square. It has a tiny metal enameled ladybug on the flower and a small pink glass gem on one of the leaves. Pages are copy paper sewn in the coptic stitch with brown embroidery thread. I think there are six signatures of 5 sheets giving the book 60 pages.

I got a very encouraging note in the mail today from the director of the Grassroots Art Center. A lady from Colorado bought all of my embroidered balls they had and wanted more. She's in luck~! I have a bunch of embroidered balls that can be hers!
It still amazes me people will give me money for things I make out of trash! The balls aren't made entirely of trash. Just their innards, but still it amazes me!

That's about it for this post.
Might be a few weeks before another post appears. A kidnapping has been scheduled and I don't know how to do a post from my phone yet. Not even sure it can be done.
At any rate...thanks for hanging around to the end!
Remember....
be good to one another!
It matters!
Peace
831

Oooh, those fishy's are so fun! Love Love Love! ...I'm jelly...you make way more art than I do and they are all fab and fun!

What is Milo? ...on my trip I saw a field of Red Clover growing. At least, that's what the sign said. I didn't know what Red clover would be used for, but it turns out it's a cover crop. Something they grow to make the soil better...or to keep it rich. I thought of you when I saw it. :)

How nice it must be to have peeps bring ya all kinds of arts and craft supplies!