I'll just get with it and show you all the happenings in my world since the last time I was here.

The kidnapping mentioned in the last post did not happen for various reasons, but the main reason is my son's  car crapped itself. Damn thing just went out of warranty and the transmission took a dump! A brand new car, still 11,000 dollars owed on it and it is useless now.  That just don't seem right! One would think a brand new car would last at least until the damn thing is paid for!   So no kidnapping for me. No  grandkid time for me. No visiting for me.
I stayed home and rearranged my work space in the kitchen instead. 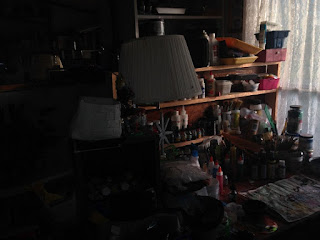 The mess before the rearranging. 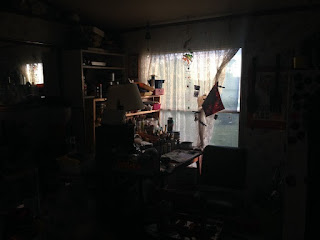 Again, before. Not sure why these pictures are so dark.... 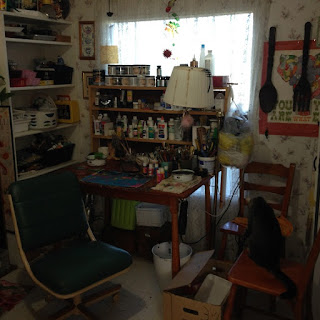 And after Ma and I moved the table around in front of the window. Now I can get to the tall white shelf on the left of the table. I also threw away two boxes of junk I didn't think I needed any longer. Murray was a good helper....sticking her nose into anything and everything!

I promptly got busy and painted after everything was back in place again. 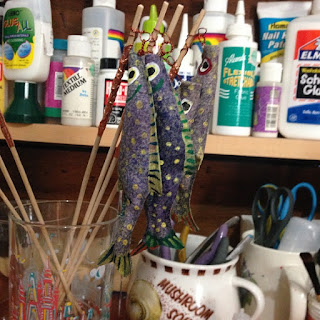 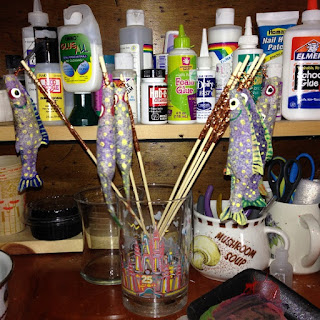 Seven of the little critters. They are made from some kind of satin material that was once the lining of a prom dress from the late 60s. It started out white but I painted the fishes after they were cut from the fabric and before they were assembled. They are glued together. They have a copper wire ring at the top with another copper wire through that ring to secure them to the bamboo skewers. That's copper foil tape around the skewers to hide the copper wire ends. The fish are about 3.5 inches long. Each one has  a tiny bit of polyester fiber stuffing inside to make them puffy. I painted them with spray fabric paint, acrylic inks and acrylic craft paint. 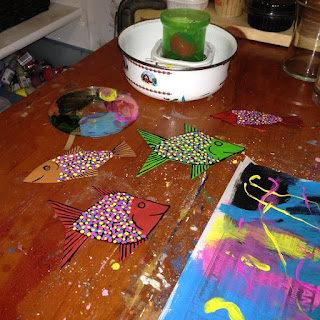 I really can't decide if I have the fishes for the swap over at AFA yet or not. I keep making more fishes! These four are made from toilet paper tubes. Painted with acrylic inks and acrylic craft paint. They still need some googly eyes.

A helpful tip:
If you have a bunch of dead CDs, use them as paint pallets. Works wonderfully! Disposable too! Or if you're like me, after use as a pallet, save for art fodder. I think the CD in this picture is going to be made into a book cover. I'll have to research how to make a round book before that happens, but yeah, I do believe that's a new book cover. 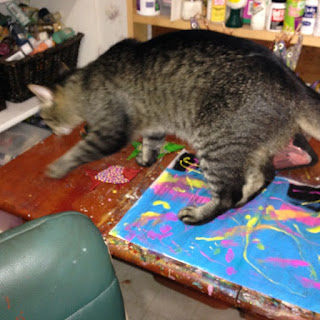 Murray cat being snoopy again. This is the only cat out of three that insists my work table is for her to run around on. She drinks my paint water too.
The painted newspaper she's standing on (which was dry at the time, thankfully) will also become a book cover in the near future. 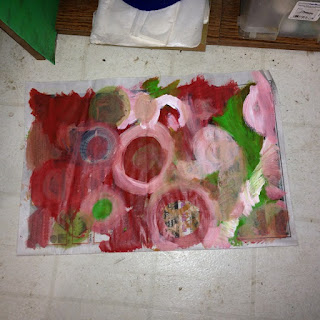 As will this painted newspaper. 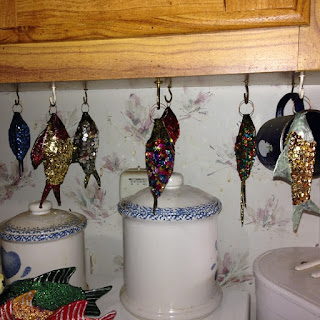 More fishes. These guys are paper mache, painted with acrylics and then covered with sequins. I've added googly eyes to them since this picture was taken. Seven seems to be the number for fishes.
And I'm still not sure which of the fishes I've made this month will end up in California to be dispersed across the Globe. 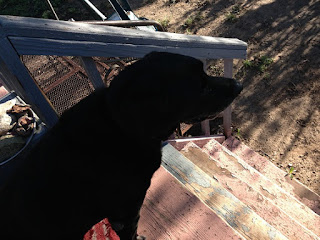 Fred Dog is still with us. I've had a chat with the vet and he has agreed to come here the time comes for Fred Dog. I think I may have jumped the gun, thinking his time was up. He seems to be doing pretty good this morning. He wasn't too uncomfortable the last few days when the temperature got up to 100F or more. I'm going to play it day by day a bit longer before I call the vet to come out and do the deed. I'm really not ready to say goodbye to Freddie just yet and I really don't think he's ready to go just yet. 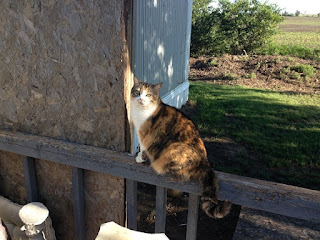 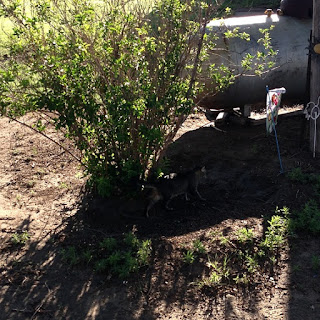 That's Murray walking past the Forsythia Bush in the front yard. I really wish I had caught the scene a few seconds later when she was walking past the flag there. It was flapping in the breeze and she attacked it! Was snarling at it! Had her claws sunk into it. Fred hates it when the kitties wrestle and make those snarling, meowing, yowling noises. He bounded down the front steps and made that cat leave that flag alone! I laughed so hard at the pair of them. Murray scooted off after giving Fred a look that should have dropped him dead! 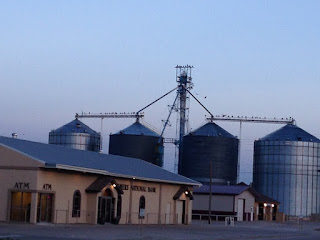 The vultures returned a few weeks ago to their roosts atop the co-op silos in the center of town.
If I'd have been thinking, I could have gotten some pretty good close up pictures of vultures yesterday afternoon. I went out with my sister to the oil rig my son works on. It's out in the middle of a pasture about four miles south of town. On the chalk road to the rig there was a dead baby deer that someone had hit. There were a gang of vultures cleaning it up. They all flew to the other side of the road, landing on the fence posts, waiting for us to move along so they could resume their feast. Must of been a dozen or more there. 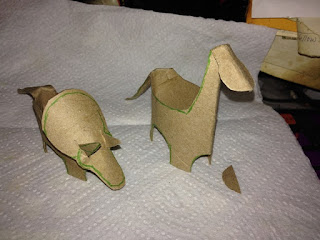 Toilet Paper Tube Dinosaurs
You can make your own!
I still need to carry mine to the kitchen so they can be painted. 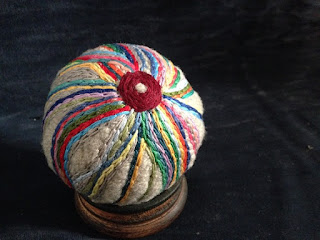 In the last post I was so excited about selling some embroidered balls, I had to make a few more!
I didn't have to make the balls themselves. I'm still flush with made balls....got about a dozen of them ready for embroidery. 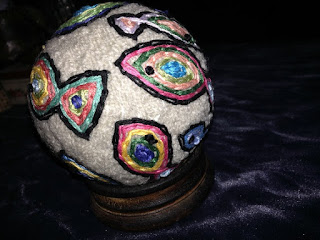 This one has fish all over it.
Fish are really on the muse's radar!!! 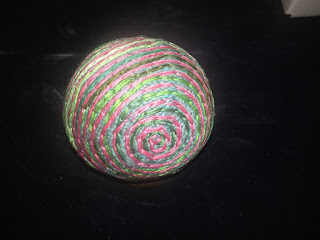 This one didn't take near as long as the other two. That fish ball took me about 8 hours total embroidery time. This one took maybe three hours. 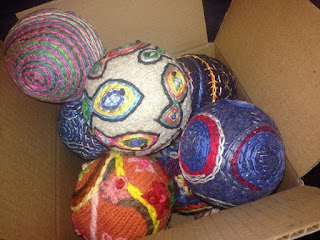 A whole box of embroidered balls! I sent off eight balls to Colorado yesterday. I've another ball in the process of being embroidered. When I watch Coronation Street later today, I will add to that embroidery. 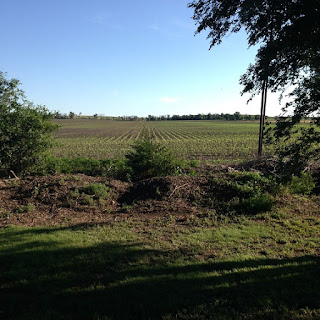 Milo field on the 17th of June.
I'll take a walk out there once the sun is fully up in the sky and take some close ups of the sprouts out there. I'm pretty sure it's milo, but I could be wrong.
That's about it from my neck of the woods.
I leave you with a problem child... 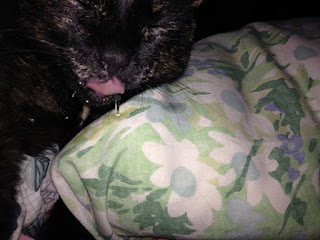 Drooling Tippy
I've never had a cat who drooled like this cat!

Thanks for wading through the ramblings and arriving at the end!
Remember....
Be good to one another!
It matters!
Peace
831
Posted by Donna at 6:28 AM

You're slaying me! Those fish are tantalizing!

Fred dog looks good...hope his days are fair and fun. :)

Oh, gosh, I have a cat that drools terribly, like he had swallowed a shoe or something. Love your workspace, I am thankfully not the only one with very little space for arting. Give a big rub to Fred dog from me...