Another Installment of Crazy..

I really don't have a great deal of stuff to show you today. I've been busy making plarn and crocheting mostly.  Better start again after having looked back at all the photographs you will see shortly. I really haven't accomplished a great deal since the last post. That was a week or so ago? Making plarn takes up a bit of time. While making plarn I sat in front of this pc watching Forensic Files, Divorce Court and Street Food videos from around the world on YouTube. I guess that beats the heck out of wasting my time sitting in front of this machine playing useless games. I do that enough on my phone!
I did get a bit of crocheting done since I was here last. I try to crochet in front of the pc but it always goes astray and I end up playing those useless games instead of crocheting. I listen to podcasts on my phone in the livingroom while crocheting. My phone updated itself almost two weeks ago and my podcasts wouldn't play, nor could I listen to NPR. Last Wednesday I went to the nextech office in town and had the girl behind the counter set it right again. They don't call those things smart phones for nothing. Mine's surely smarter than I am in a lot of areas!
A lot of these photos are of stuff I made weeks ago and forgot to include.

I was certain I had taken a picture of the north field since the last post but there were no new ones to show. I will try to keep up with the field throughout the growing season, which will not end till next July. I suspect, no, no, I HOPE we get some cows to look at during the winter. The field is as green as it can be right now. Growing like crazy! Grazing cows would be a nice addition.

Mr. Possum came for a visit at 5 o'clock this morning. I was sound asleep when I heard a noise in the kitchen. I thought it was the cat climbing on stuff she shouldn't be climbing on. I hollered at Lola to get down from there! A bit later I heard a bigger crash and came fully awake. I got up to see what the hell that cat was doing. Wasn't the cat at all. She was sitting in the livingroom right outside the kitchen when I came out of my room. Mr. Possum was on the shelf beside the table where I do painting. He was sitting smack dab in the big basket of craft paints that sit on the second shelf up from the floor. He had knocked my strategically placed piles of projects in the works....right on the floor scattered everything on the table and somehow managed NOT to spill the paint water. How he got on the table, I don't know. He was awfully quiet about it all as it happened. Remember I was asleep until the crash happened.
He sat there, just looking at me as I calmly asked why the hell he was in the house. Then he bared his teeth at me as though he were smiling. Looked like a kid caught with his hand in the cookie jar. Possums aren't aggressive in the least. I wasn't that close to him.  He had knocked a ball of yarn off the shelf onto the floor along with a boatload of other stuff. I picked it up and threw it at him. He seemed not to care. I couldn't do anything but wait for him to leave. Lola was having nothing to do with this circus. Murray was MIA. She didn't even bother coming home last night. I went back to bed. Shut all the lights off and crawled back between the sheets and left Mr. Possum to his own devices. I'm sure he filled his belly with cat food while he was here. I should have taken his picture but I wasn't thinking. I was half asleep. After I had gone back to bed, five minutes later I heard him leave. I got up to make sure he had indeed taken the route out he'd taken in. He was headed down the front porch steps last I saw of him. It's about that time of year, I won't be leaving the front door open at all hours. I have only myself to blame for the kitchen mess. Possums don't know any better!

I stepped out on the porch in the grayness of dawn to see Mr. Possum on his way. There was a thick fog all about. It was still dark at 5:22 a.m. but light enough to see with the light of the moon and the yard light. It was almost as pretty as the moon was last night. It was chilly this morning, in the lower 40sF.
At any rate. You all won't be seeing those sights unfortunately.
I do have a few things to show you though, so we better get on with it!
Enjoy!

Last post I told you all the things I forgot to take pictures of that you may see in a future post. This post contains some of those things. I think I missed one or two....
At any rate these are all 4 x 6 inches. Markers on colored writing paper. I don't know if they'll end up being postcards or book covers. Or something entirely different than that. Who knows! 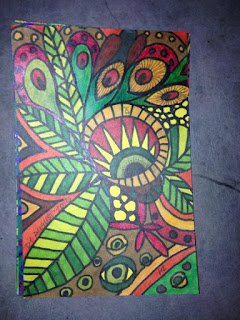 The paper started out orange. 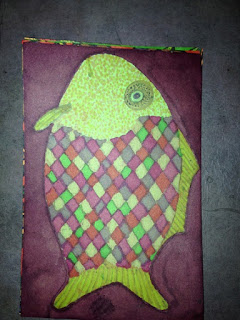 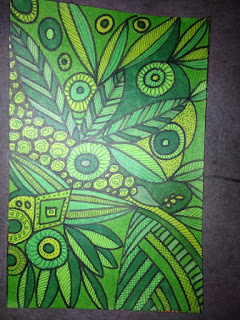 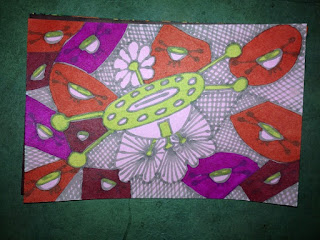 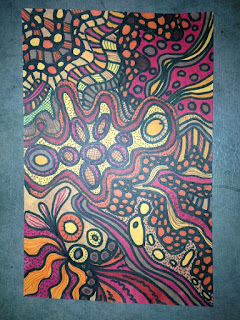 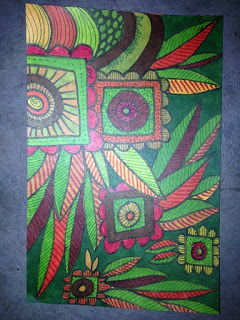 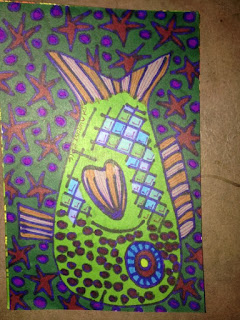 I am pretty sure I had all these pictures oriented correctly before I added them here. What's up with Blogger changing things up like that? 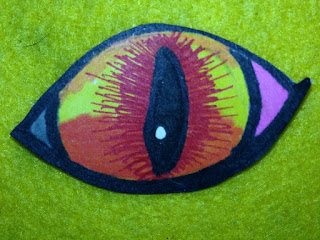 The eyeball is upside down too....
This eyeball was going to be the eye for a cyclops cat but the eye is all that materialized so far. It's a little less than two inches across. Markers on book page paper. (end papers) I did the eyeball three or four days ago. I don't know, they all run together sometimes. 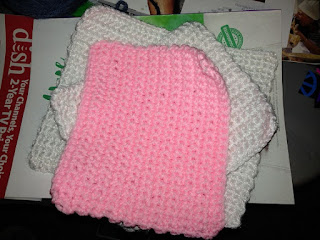 I am not fond of the color pink! I have a boatload of pink yarn and a boatload of white as well... I decided to make some backings for mug rugs. I'll do applique on felt with felt and sew them to these instead of using felt like I usually do for mug rugs. The bottom on is a bit big to be a mug rug so it will be a hot pot mat instead. I made these earlier today. 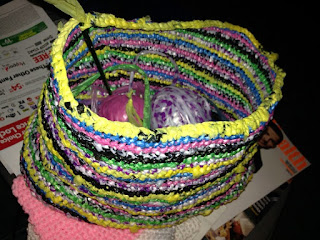 Actually I've spent most of yesterday and today doing little more than sitting on my backside crocheting. I started this plarn bag yesterday. I ran out of yellow plarn so will have to make more before I can finish this bag. It needs a couple more rows of each color. It's a bit short at this point. 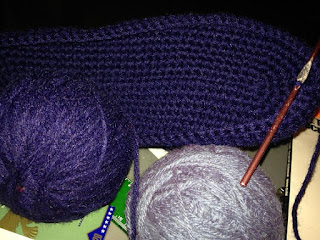 When I ran out of yellow plarn I started crocheting with acrylic yarn. This will be a small market bag within a day or two. The colors look totally off on my monitor. They are dark blue and a grayish smokey blue color. I've no idea what size hook I'm using as it had been rubbed clean of that information when I acquired the hook. For some reason someone scratched it off. I use this hook a lot with acrylic yarn.

The day before yesterday I dragged out my scrap bag of felt and made some felt brooches for the swap instead of the ones I showed you all the last post. 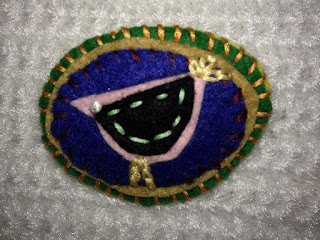 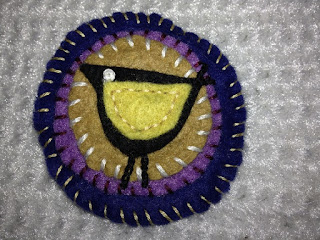 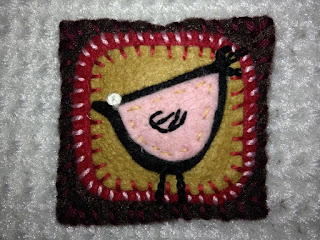 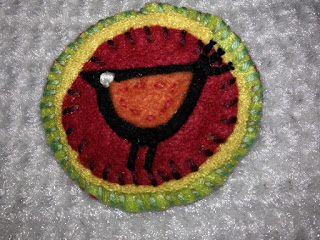 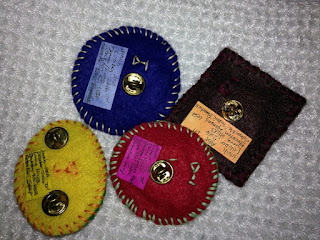 I don't know if the lapel pin backs are acceptable per swap rules but they were done by the time I thought to check. I wrote my info on a sheet of white paper and colored it with markers to match the brooch. I then glued those little papers to the brooch. 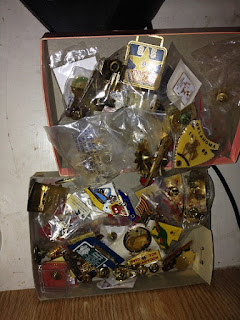 I used some of these metal lapel pins for the innards of the bird brooches. I have a shipload of these lapel pins. Some of them are worthless as far as monetary value. They work great for this application though. I also have big safety pins that would have worked but the lapel pins were on the shelf six feet away. The safety pins are way off in the kitchen, pinned to the inside of my wool bag that I sometimes take along when I leave the house. 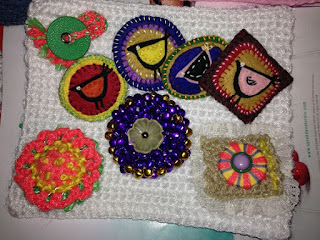 Either way, I'm set for the swap. I really like the bird pins the best. I'd trade the others. Though I really do like the purple bells. 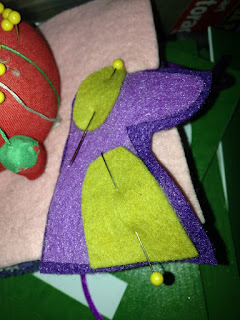 This will eventually become a little brooch too. Dog made with scraps of felt. I'll sew him together with embroidery thread and put a double pronged lapel pin inside him. 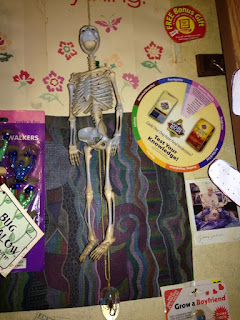 This is about as Halloweeny it's going to get around my house. This little rubber skeleton hangs from the ceiling in my deskroom year round. He's about a foot tall. He's hung in that spot for years!
Yes, that is a Grow a Boyfriend and a scorpion in acrylic. All kinds of weird crap like this on the walls of this room where all writing takes place. The fella with the deer is Jimmy Johnson, says so right on the picture. My youngest son brought me this photograph maybe 10years ago. He said he got it at the bait shop in town. He's a stinker of a boy, used to be a bigger stinker of a boy when he was younger. He didn't come right out and say he swiped it, but that's what he did. He doesn't know who Jimmy Johnson is anymore than I do. "But look at that deer, Mom!"
I drew the abstract behind the skeleton shortly after I moved into this house, so about 11 years ago.
I got the Grow a Boyfriend from my sister for my birthday a few years ago. Best kind of boyfriend to have! Just keep him locked up in his packaging so he can't give you no shit! I haven't heard a peep outta this one EVER! LOL
I'm pretty sure one of my sons gave me the scorpion. I have several scorpions.

OMWord! I would be so scared of the Possum! Don't they sorta look like big rats...

...I love the green floral painting and your bird pins! Maybe I'll get one of the pins in a swap. :)

It is always good to have a new friend :) we have a headhog and he eats cat food and my Muri just sits there and is very friendly. I love you work and the brooches are beautiful!