The Possums Who Come to Dinner

In a previous post, might of been the last post...? ...anyway in a previous post I told you all about that fool opossum that thought my painting table was a good place to explore in the kitchen. He's a she and she has a friend who is a tad smaller than she is.

I've only seen her little friend once. I found that one on the kitchen table as well.
And once again, I have only myself to blame because possums don't know any better! You leave the door open and they think it is an invitation to come right on in and wreak havoc if they're so inclined.
I got busy ....not really busy...more like engrossed on somethings or another on the world wide web the other evening and lost all track of time despite there's a clock on this screen. It was dark outside before I closed the front door. It is hard to see outside in this room so I hadn't noticed the sun had gone down.
I was headed to the kitchen to fill my cup when I realized, too late, that it was dark outside.
I closed the door anyway cause I really didn't want possums in the house. Still don't want possums in the house!

Just because I prefer they stay outside, doesn't mean they will when I give them opportunity to come on in and make themselves to home! This one was considerably smaller than the one that sat in the basket on the shelf where paints are stored. That possum is a nice plump specimen! This guy was little in stature, not skinny, just little and stank to high heaven! Unlike the one caught in the paint basket, this one did not grin at me. This one snarled and growled and raised his hackles at me. Then it promptly knocked a container of odds and ends tools off the table, across the kitchen floor! His mama taught him well, put up a fight! But his little spectacle didn't really concern me too much. He only did it once and he really didn't have his heart in it!

I went on through the kitchen, right past that belligerent youngster, into the laundry room to turn on the light and open the back door to give Junior an escape route.

This little possum has appeared to have moved on as this is the only encounter I've had with it. And I do not have pictures to show you....darn! This happened four or five days ago.

The other one though....yeah she's sticking around. There's free grub on occasion! 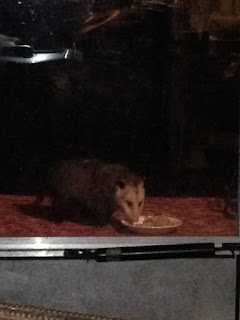 Last night she had leftover rice with ham chunks and bell peppers. I wasn't real crazy about the combination either! That's why Lotty, that's what I've named her, got it. She took her sweet old time eating this stuff. She came back three times that I know of. She runs whenever she sees me walk past the door and if I'm not quiet about walking through the house, she runs when she hears me so I only see the back end of her going down the stairs. I dumped some oil from a can of tuna onto that rice when she wasn't looking. She wasn't on the porch at any rate...It must have improved the taste as the bowl was licked clean by morning. Except she didn't eat any of the green pepper. Those chunks were scattered all over the rug. No biggie, really. I just swept them onto the ground and the chickens came along and cleaned them up. 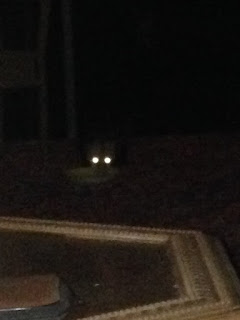 Don't try to take pictures of a possum on a dark porch, through the front door glass while you're sitting in the dark as well. Especially don't use the flash. It makes that table top look like I haven't dusted in 20 years! And it makes possums turn into demonic looking creatures.
Course, if that's the look you're going for....well, that's how it's done apparently.
That's Lotty looking all devilish, eating a bowl of leftover scrambled eggs and zucchini. She doesn't like zucchini any better than she likes green peppers.
She's a bit of a messy eater. The porch always needs swept afterwards. 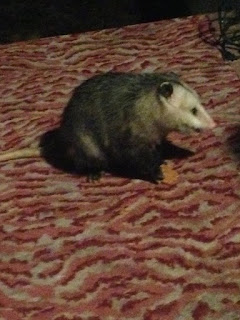 But look at that little face! She loves cookies. Linda was right about that!
Linda is my sister. She is the one who provided the white chocolate chip cookie to give to Lotty.
Linda used to have her own resident possum. His name was Tony and he lived on her front porch. She generally fed him cat food but Linda's husband used to go to the store specifically to buy Tony Oreo Cookies. He lived on their front porch in a small dog house Linda had put there for the neighbor's cat who wasn't allowed inside. Tony moved in instead. He stayed for a few months and then moved on on his own accord. When I told her about the possums she said Ma had already told her. She offered up the advice that I MUST feed them cookies! "They LOVE cookies!" she said. She gave me the cookie, I gave it to Lotty. 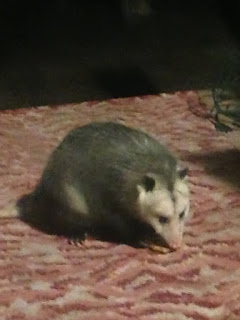 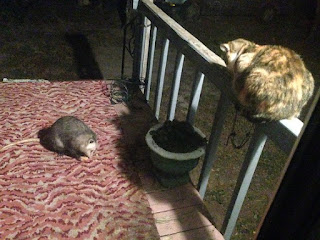 And when we pan out to see the entire scene... Lotty has a spectator. Miss Lola had checked that cookie out right after I put it on the porch and deemed it not to her liking. She didn't need that cookie! Look at the size of that cat! She must of been on the porch when Lotty came to visit. I doubt Lola arrived on the porch after the possum. 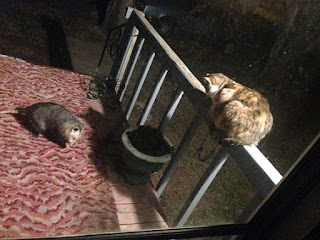 Lotty has snarfed down every crumb of that cookie and is now washing her face with her front paws. She has fingers on her front paws much like a raccoon. She licked all her little fingers clean and then washed her snout. Lola watched from the porch railing.

When Lotty finished her bath, she snuffled around the perimeter of the front porch, presumably to check for additional cookies. Upon finding nothing of interest she ambled on down the stairs. 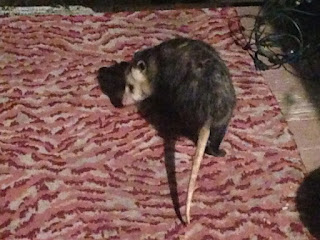 I know Lotty is a girl because when she went down the stairs, I could see the underside of her belly. She has a pouch. Boy possums don't have pouches.

If I continue to offer her leftovers, she will probably stay through the winter. But she's a mind of her own and I'm sure what I want or think really doesn't matter to her.
I will enjoy her while she comes around and be happy she chose to stay as long as she does.

I do want her to stay out of the house though. Opossums are not allowed in the house. Under the house is OK, but not in it.

Thanks for reading about Lotty and the Juvenile Delinquent. I am in hopes JD has moved on and won't return. I think one resident possum is plenty. But if he does come back, I guess he and Lotty can fight it out where it works for them. I don't know that JD is a boy. I just know he's a youngun.

I'm sure there will be more chapters in the saga of The Possums Who Come to Dinner.
Until then....
Remember....
Be kind to one another.
It matters!
Peace
831

Do they move fast? Do they bite? I thought that it was a big animal...but your cat is bigger. :)

They can move pretty fast when they want to but generally they just lumber from here to there, taking their sweet old time. I suspect if you got close enough and the possum was in the mood, yeah, you'd possibly get bitten. They do have some knarly teeth! Possums aren't well known to carry rabies so it probably wouldn't be as bad as it could be if one should get bitten. I find them to be quite endearing animals. That may stem from the fact I had a baby possum as a pet when I was a teenager. She didn't bite, but she didn't like being held either. And I was a terrible possum mama at the time. I ended up giving Petunia to my Chemistry Teacher (he was also the biology teacher).
And yes, Lola is fatter than the possum, but the possum is longer than the cat. Possum nor cat seem to mind one way or another about the other.