Hello Readers! Yeah, there's art today, not a lot though...I've had a toothache for the last few days and didn't much feel like doing art. That and my muse flew the coop after all those kids birthed last weekend! And I'm still birthing the little guys!
It was a beautiful day today! Bank Clock said 65 at 12:00PM. I didn't take one picture outside today either. Not sure why I forgot the camera for the trip to Hays. Guess it just wasn't needed. Anyway....a trip to Hays was had. I asked my brother to go with me. We had a great time...shopping at Wally World and lunch.
I bought a new set of markers at WW. My grays are fading quickly and needed some new ones. I thought perhaps that would bring the muse back quicker but it really didn't. She's here but the spirit isn't in it.  Not where the markers are concerned anyway. Oh, no, she's busy birthing bottle cap kids and others of that variety.
We'll start with the half-attempts the muse made at making art yesterday and this morning. I was three days behind on the 365 Project. These get me caught up there, thankfully. I don't like to be behind on that! 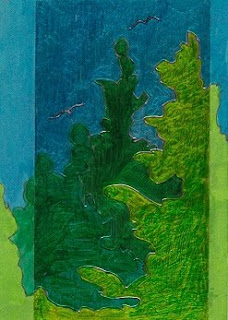 A Clear Afternoon
ATC
4 March 2010
Markers on foil tape attached to recycled cardstock.
This was an experiment. I like the effect of markers on the silver foil tape. I'll be experimenting with this technique again.
365 Project #62 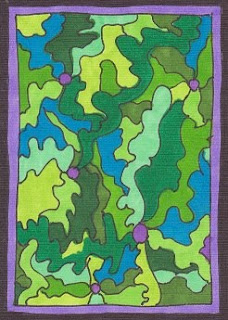 A Note From Nature
ATC
5 March 2010
I drew this picture sometime last week and colored it in on Friday. Markers on recycled cardstock.
365 Project #64 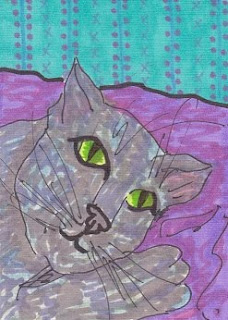 Fraser
ATC
4 March 2010
Markers on recycled cardstock.
Fraser isn't feeling too well. He looks a little 'green around the gills'.
365 Project #63
Day 60's card is Fuzzy Wuzzy.
Day 61's card is Green Collage Fish.
I had to resort to using older ATCs for the 365 Project for earlier in the week. I didn't want to get too far behind. I prefer the cards be done on the day they are for, but the one's used still fit in the guidelines. There were made this year.
And the Bottle Cap Kids have me obssessed! I was out in the garage again this morning digging through the screws and what have you out there! I even took a look at what WW had to offer that would work for kids. I didn't buy anything of that sort at WW, but found some things that I think my brother may have some of somewhere.
There's a three gallon bucket out in my garage where Sam throws little doodads that he takes off of junk. It isn't anywhere near full, you can still see the bottom of the bucket. I need go out there and go through that bucket. Some of that stuff is useless to me but brother has his heart in the right spot when he tosses crap in that bucket.
On to the newest additions: 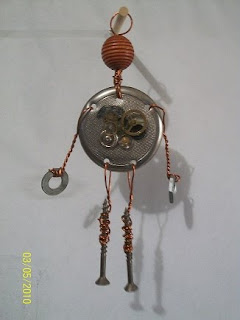 Gabriel Logan
Bottle Cap Kid
3 March 2010
Gab isn't really a bottle cap kid, but he stays in that category anyway. His belly is the back of a pocket watch with watch parts glued to it. His arms, legs and neck are copper wire salvaged from a vaccuum sweeper. His legs are wood screws, his hands, a washer and a nut, his head a wooden bead. He stands just over six inches tall. He is designed to be hung. 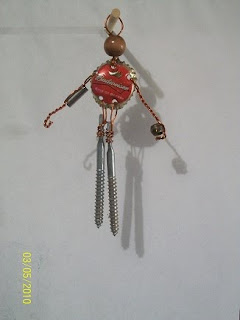 Olivia Jane
BCK
4 March 2010
Her belly is a Budweiser metal bottle cap. Her arms, legs and neck are salvaged copper wire. Her legs are fancy-dancy screws that I'm sure have a specific name, but danged if I know what it is! They have holes in one end instead of a head. Her arms also have pieces I've no name for. One is a chrome tube and the other is a small brass coupler. Her head is a wooden bead. She stands at about 5 inches. She is designed to hang. 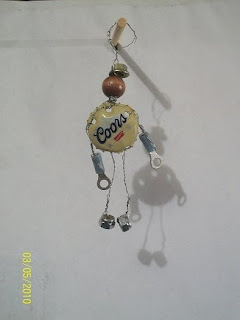 Shorty
BCK
5 March 2010
Shorty has a brass nut atop his wooden bead head. His belly is a Coors metal bottle cap. His hands are connectors and his feet are plastic lined nuts. The wire used to hold him together, I have no idea where it came from. Salvaged from something.  Shorty stands about 4 1/2 inches. He is designed to hang. 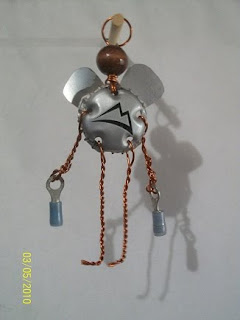 Sugar Angel
BCK
5 March 2010
Sugar's head is a wooden bead, her hands; connectors of some sort, her arms, legs and neck are salvaged copper wire. Her wings are cut from a Mountain Dew can. I should have glued them on with the graphics from the can showing instead of showing the inside of the can. It says 'with sugar' across her wings, hence her name. She stands right at 4 1/2 inches. She is designed to hang.
I think I'll be putting wings on a few more of the kids. Just depends on what moves the muse at the time.
You'll be seeing at least 2 kids in the next post...whenever that happens. I have two that are put together but their bellys are not quite dry enough to hang them up to take a picture of them. So they'll wait to be named and photographed till I get around to blogging again.
That tooth still needs attention, but it doesn't hurt like the dickens anymore so I'm a happy camper with that.
I snagged a stack of yellow colors of paint chip samples while at WW today. I find yellow collage materials hard to come by for some reason. It is the least found in the color scheme in my experiences.
The mail brought me four envelopes of art, two newspapers, my electric bill, some drugs (legal ones. It's not a good idea to get the illegal kind through the post office. I think they frown upon that.), and two letters for my youngest son.  It was a good mail day with the exception of the electric bill. I got to pay that thing by Monday!
I did away with my house phone. (If truth be known, I forgot to pay the bill and they shut the dang thing off yet again! So I decided to heck with it! I don' t really need a land line.) Lost my infamous number! :(  Now I just have a boring regular number on my cell phone. The last four digits of my phone number used to be 6969. It really surprises me that I did not ever get one prank call associated with that number. My friends have always given me a hard time (in a good way) about it though. When I first got that number I was sitting at my friend's diningroom table using her phone to arrange for my phone to be installed. They gave me the new number at that time. When I hung up I said to H, "Guess what my new number is!" She said, "6969?" It was just too funny that she guessed it on the first try and she didn't even really THINK about what it might be. That was dang near 15 years ago! I'm going to miss my infamous number....
I still haven't learned my cell phone number. Good thing it's plastered on the backside of the phone! My thoughtful son, RJ, made sure to ask them to put it there so I would know what it is! Brat, but a good brat nonetheless.
I haven't talked to that boy for a few weeks. I've talked to Terah though. I know he's fine and so are she and the kids. Need some new pictures of that little Miss Anabel!
Talked to RW earlier this evening. He called to tell me about things he knows I could care less about. I hadn't talked to him for a few days. He's such a silly kid. Lou and the youngun's are fine there too.
Get your hugs! I didn't get any hugs on Friday. "( I'll get extra tomorrow! :)
Peace
831
Posted by Donna at 1:13 AM

these bottle top kids are just getting better and better, i love them, what a great obsession to have lol. is gabriel logan still around? i would love to have him or any other with a watch part! thas is just so neat...what could we swap for of mine???