This, That and Little Bit of the Other....

Hello Everyone!
My muse is still abundantly creating.
A few projects to show you all today.
I'm working on a gift for my youngest son for Christmas right now. Thought I'd show you all the progress thus far. 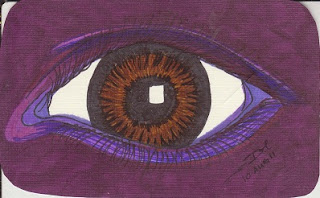 This eye is done in markers on cardstock and has been glued into the drawer of the wooden piece below. 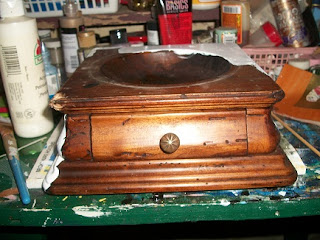 I should have taken a picture of it before I took the ashtray out, but I didn't. It has a large brass tray that goes in the circular indention on the top of the box. That's a drawer in the front. In this picture I've already started painting it. It is no longer white now though. I've painted it a sparkly metallic black. I have intentions of putting stars all over the outside of it. After it's done, I'll put the brass tray back in the top. There on the left hand corner it appears as though a dog decided this wooden box would make a good chew toy. Sanding didn't smooth that out all too well. I'll show you the completed project when it's done sometime within the next week or so. I want the black paint to dry thoroughly before I put the stars on and put a coat of varnish on it.
Dotee bodies got transformed into actual dotees in the last few days also. 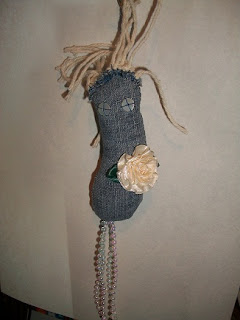 Blue Denim Carnation Dotee
She's made from a pair of old blue jeans, a satin fabric carnation, mother of pearl beads for her eyes, cotton string hair and stringed fake pearls for danglies. 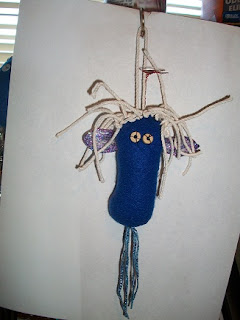 Dark Blue Felt Angel Dotee
Her wings are made from fine mesh netting (used for tying up rice/birdseed for a wedding),glitter glue and copper wire. She has silk ribbon for danglies, wooden beads for eyes, thick cotton string for hair and a copperwire halo. 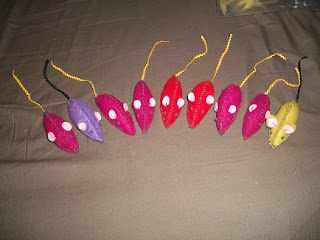 Over the weekend, I went to a yard sale and found a boatload of felt for $2. I've been busy making mice. Catnip mice to be exact. I've given 2 purple and 1 yellow one away so far. 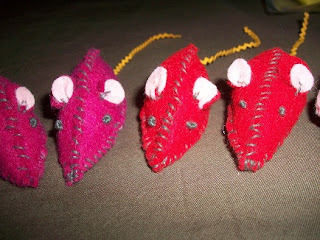 Here's a close up.
They are made from a pattern I drew myself after an internet search for things to make from the felt. They look a whole lot like the ones I drew the pattern from. Mine are about 3 inches long, 1.25 inches tall. The first ones I made were filled with fiberfil, but I've since been filling them with 100% cotton Cotton balls. They each have about 1/2 teaspoon of dried catnip in them as well. There are no beads or anything like that for a cat to choke on on them. They have mini rick rack tails and french knots for eyes.
I can report that having two cats in the house while making catnip mice is, let's say, challenging! I had more help with these little guys than I actually needed! Billy and Lola both tried to run off with numerous mice and they were johnny-on-the-spot when it came time to put the catnip in the mice. Those two felines could be at the other end of the house the whole time I was sewing but when it came time for the catnip, it was like they'd been paying attention and here they came running to stick their noses in the tin of catnip or try to run off with the mouse before it was even completed!
I have about 2 dozen of these little guys cut out, ready to sew. There will be many more mice!
I am sending them to the flea market in October.
And then there were more dottees..... 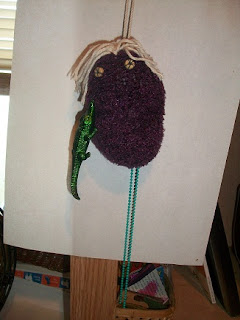 Purple Fuzzy Alligator Dotee
She's made from an old sweater, has wooden beads for eyes, cotton string hair, bathtub chain danglies and a plastic alligator bead sewn to her tummy to keep her company. She's a fat dotee!
(I have one more alligator bead that will probably end up as a dotee embellishment.) 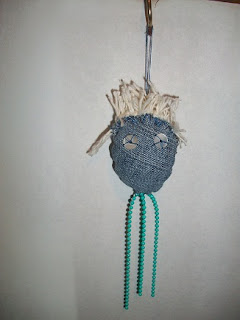 Tiny Denim Dotee
She is a tiny one! Less than four inches from the top of her head to the ends of her danglies. She is made from an old pair of jeans. She has mother of pearl beads for eyes, cotton string hair, and bathtub chain danglies. 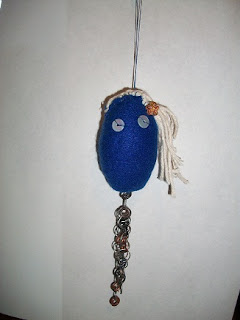 Blue Felt Pony Tail Dotee
She's made from thick blue felt with cotton string hair, mother of pearl beads for eyes, a sparkly plastic flower bead in her hair and danglies made from squished grommets and stainless steel wire jumprings. She's a little one too. 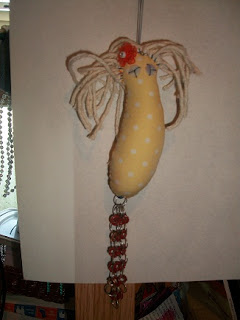 Yellow Polka Dot Dotee
She's made from an old cotton shirt I used to wear quite frequently! It went through the washing machine with bleach one day and ended up with bleached out spots so I cut it up for the fabric. She has danglies made the same way as the dark blue felt ponytail dotee. Cotton string for hair, mother of pearl beads for eyes and a little orange ribbon flower in her hair.
I was getting tired of sewing together mice the day before yesterday, so I went back online to see what else could be made from the boatload of felt I've acquired. I came across this snake on the same site as the mice, I do believe. The tutorial showed you how to make your own pattern for the snake. I'll be making some more snakes, they are cute as they can be! Will have to figure out another way to do the eyes though. I'm not crazy about the sequin and seed bead route I took with this fella. He's a tiny little fella. Only about an inch and half wide at his head, and as he's made in a spiral shape, he's not more than 6 inches wide when he's coiled up. He's stuffed so tightly though that he stands up on his own. He was a fun one to make! 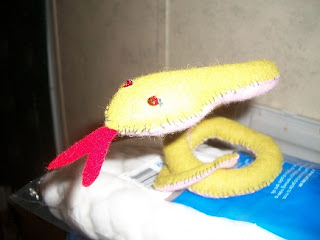 With the scraps from cutting out all those mice, I made these two lenths of tiny pennants. Not sure just what the heck I'm going to do with them.... I may use up the rest of the pennants already cut from those scraps and put it on my Christmas tree come December. I'm not sure what will happen with it. 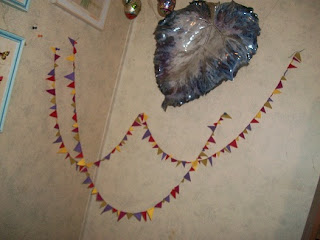 And here's the paper mache box I've been rattling on about for the last few  posts.
Nothing special. Just a box made from food packaging chipboard and paper mache clay. That thing is so sturdy, if you turned it upside down, you could use it for a step stool! I wouldn't suggest doing that as it's only  a 10 inch cube, basically. Not quite big enough to be standing on! I'm using it to hold all those newspapers that arrive weekly in my mailbox! 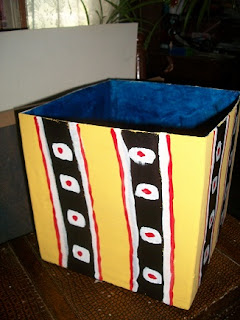 I used artist grade acrylic paints to paint it. 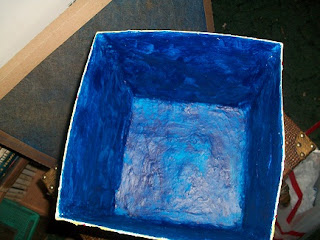 It's blue inside because blue is the color that needed to be used up! It was getting quite thick in the tube. Mission Accomplished. That blue acrylic tube is now empty and I've a lovely shade of blue inside my new newspaper box!
Making more paper mache clay is on my list of things to do!
I suspect there will be more creative endeavors to share before too many days go by!
The County Fair starts on Monday of next week so there will be at least one Fair Post. I don't know how many days I'll make it to the fair....I will make it there on Monday though cause I need to take the fish picture I gave to Evelyn for her birthday there to enter it in Open Class.
Until next time.....
be good to one another! It matters so much more than we casually accept. Be kinder than necessary. There's always someone battling bigger demons than you are!
Peace
831
Posted by Donna at 10:10 AM