I've been home now for right at 48 hours. Wish I could say I've made tons of progress and have pictures to prove it. Some of it, you will just have to take my word for! 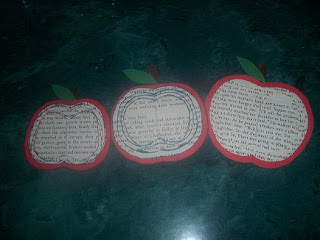 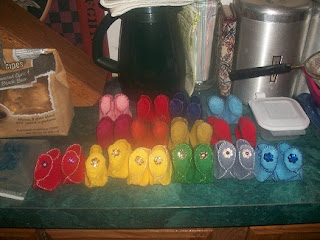 This is a picture of ALL the shoes made thus far, except for the two sitting on the table in the livingroom that I  sewed today. Forgot to take their picture!
The Elf Slippers still have a bit of work to do on them before they will be done!
All the naked ones need to look like the ones with sequins and beads and they all need a little gold jingle bell sewn to their toes. Oh and there are still 2 slippers to sew. I do have them cut out and the thread ready to sew them together.. Just need to find an hour to sit in the daylight to do that sewing.
The rest I'm about to say you will just have to take my word on cause I didn't take pictures.
On the kitchen table are nine paper mache birds waiting for their first coat of paint. I put wings on the last three yesterday and got the others all ready for painting. This project is going OK, not on schedule, but OK.
Also on the kitchen table are 25 chipboard stars working their way towards being star ornaments.
There's a sack full of toilet paper tubes, paper towel tubes and one gift wrap tube hanging off the back of one of the kitchen chairs that are slated to become snowman hats.
I've no idea what the 12th ornament will end up being right now. I'm hoping to figure that out in the next 22 days...cause that's the amount of time I have left to make the ornament project a success!
All's good. I'm on it!
Be good to one another! It matters!
Get some hugs and kisses! Give some while you're at it!
Peace, my friends!
831
Posted by Donna at 11:17 PM