Weather and Some Arty Stuff

Hello Readers!
We'll start off with the weather. I've felt poorly all week long. Sleeping more than I am awake. When the weather turns nasty it is somewhat of a hassle for someone to attempt to wake my hide if the need arises to go underground. It is severe weather season and these things are bound to happen.
The clock rolled around to 8:30 p.m. and my sister called to tell me the storm was on its way and coming fast. 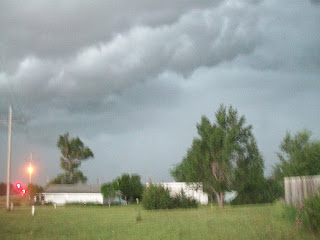 This is what the sky looked like as I went out my backdoor to make the walk across the yard to my sister's house. That's actually my mother's house in the picture. My sister's privacy fence is barely visible to the right. My house is about the same distance from Susan's house as her's is from Ma's house.
Don't enlarge that photo above. It WILL hurt your eyes. I forgot to reset the camera setting to take pictures of things no quite so close as I usually take pictures. 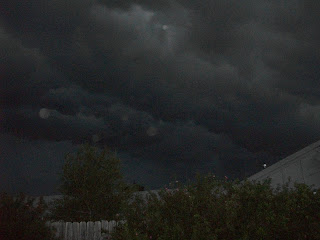 Five minutes after I got there the sky looked like this!
When Susan said the storm was coming fast, she wasn't kidding! 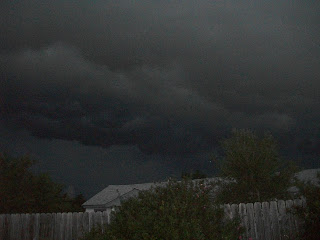 The closer the dark clouds got to us, the darker they got! We almost headed to the basement just from the appearance of the sky. There wasn't any rain, no wind to speak of but it got cold....it got cold in an instant. 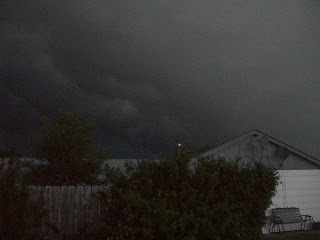 It really felt like hell was rolling our way! I've never seen clouds quite so black in my entire life!
For all the drama of the clouds, we only got a bit of rain, a bit of gusty wind and no sunset cause those black clouds hid the sunset. They rolled right by us. About 50 miles east--the direction these clouds were travelling--an F3 tornado touched down in farmland and destroyed a farmstead. The rain finally let up around 9:30 and I walked home in a fine mist.
The day will come this summer when the storms will force us into the basement. Every summer we end up in the basement at least once because of a tornado warning in the area.
The bottom three pictures will get larger if you click on them.

I made some trades over the weekend and finally got them packaged up today. 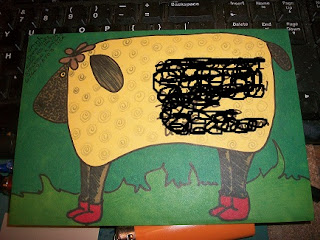 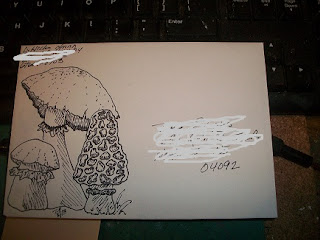 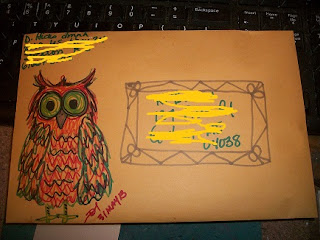 Owl
altered envelope
this is a manilla envelope 6x9 inches

While the weather was acting up outside on Wednesday I was busy cooking up some more felt food. 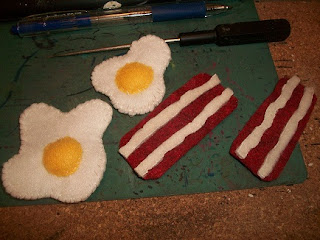 I sewed the two eggs but the two bacon slices are glued together. There's a tiny wad of fiber filling inside the egg yolks to make them stand up like real eggs do.
I packaged up all the felt food to be mailed off as I traded it for other goodies. I've promised my youngest son I would make him some felt bacon magnets for his fridge. He asked if he could have the two pictured above but they were already spoken for. The boy is in luck cause I've already cut the red parts out, just need to cut four white stripes and glue them on the red and slap some magnet fragments on the backside.
The felt food was a big hit!

I have cut out 10 monster bodies that Ma has taken home with her to sew. She will bring them back to me soon and you all will see some more monsters. Her sewing the bodies on the sewing machine sure makes those monsters go a lot faster. I sent eight monster bodies home with her on Friday and 2 on Monday. I believe there is six, maybe only five, different kinds of fabrics for the monsters. They will definitely be a motley crew that's for sure!

Over the weekend I went to yard sales with Ma. I brought home about half a dozen stuffed animals that I am going to cannibalize for their stuffing and their fake fur for use in making more monsters! Furry horns would be too cool! Unfortunately the skins of the animals I brought home will not be large enough for much more than horns on monsters and different shapes on mug rugs. They are all stacked up on the washing machine in the laundry room at the moment. If all goes according to my plans tomorrow afternoon, those animals will get a spin in that machine so I can cut them up!
I brought home a few good finds from the yard sales;
a near full 20oz bag of fiber filling -75 cents
spiral notebook with plain black paper - 10 cents
spiral notebook with lined black paper - 10 cents
spiral bound date book for 2013 - 25 cents
ready made journal and some envelopes in a nice box - 50 cents
doll size handmade willow twig chair-50 cents
(I have a thing for chairs and the littler they are the better I like them!)
two rolls of barely used clear contact paper - $1
embroidered plastic canvas box with 27 skeins of embroidery thread in various colors-25 cents
padded, quilted satin covered box with two lengths of lace, 4 spools of 1/8th inch ribbon (4 colors) and 7 bunches of tiny silk roses in 3 colors-25 cents
15 music CDs - $3
plastic shelf-$2
The animals were free as was the box of toys I brought home. I got some cool little toys out of that box that will not go in the toy box. They went in my big glass jar of odd little things instead. I'll probably use the tiny octopus on the fish picture I'm working on now.
It was a good day to go looking for treasures! I left home with less than $20 and came home with just under $4 so I didn't too badly. I can't remember all what I did buy. I got a new butcher knife, along with some other kitchen utensils for a $1. I brought home a new screen sieve too. Think I gave a dime for it. It was a good day!

Some leather covered books will show up on this blog sometime in the next few months. I acquired a really nice pair of suede pants a couple weeks ago that will make perfect material for book covers. I'm having a hard time picking the scissors up to disassemble them though. They are a really nice pair of pants! They won't fit my fat hide! Last time I could fit in a size ten I was probably about ten! I will tackle them one day soon though. I'm estimating getting at least four good sized books from the pants and at least half a dozen tiny books with more scraps left over for other projects.

I've been working on my fish picture more this week. I've painted a boatload of styrofoam rocks for the canvas. I am going with a green/yellow/blue color theme at the moment. That is subject to change though as I never know which way the muse will go. I didn't  think there would be any yellow on that canvas but it has a LOT of yellow on it at the moment! I'll take pictures in the morning before I do anything else to the canvas tomorrow and share with you all the process of making the newest fish picture. I still need to decide which fish will be used on this one.
I have a mushroom box full of little doodads to add to the rock layer when the time comes. I'll probably need some more though so that will be an ongoing project within a project!
Right now the fish canvas has a layer of book page from a paperback astrology book, a layer of purple drug pamphlet and red drug pamphlet (the two colors making up one layer), then a layer of green printers ink that didn't quite cover the red and purple of the drug pamphlets. Before the green ink had dried I splashed 90% alcohol all over the canvas to do some cool stuff to the ink. When the ink had dried I painted yellow acrylic splotchily over the whole. I let that all dry while I got a brownie and a glass of milk. Next I drizzled yellow puff paint all over the canvas to give the appearance of stuff in the distance. The same was done with a pale lavendar puff paint. I let that dry for a few minutes and took my big brush and spread the wet puff paint horizontally across the canvas. This resulted in the background being a bit more yellow than I thought I was going for but we'll work with it for now. While the puff paint began to dry I took the Gorilla Glue and 'drew' seaweed like structures vertically across the canvas from about three inches above the lower edge to about an inch from the top edge. I needed some bling, or so I thought, so I stuck dark blue sequins, tiny blue beads and a few large pink sequins on the still sticky Gorilla Glue. The sequins are sparsely distributed throughout the seaweed. The I put a line of green glitter glue atop the wet Gorilla Glue so it will sink into the Gorilla Glue as it expands in the drying process. That's all an experiment with putting glitter glue atop Gorilla Glue. I've no clue what the result of that will be. It will mostly disappear by the time the picture is finished so I didn't have any qualms to experimenting with this one.
Truth be told, I'm just not 'feeling' this fish picture like I have the previous six.
You all will be along for the ride if you come read the stories unfolding about it!

I am concerned about where I have the canvas laying while it dries. I really hope none of the cats decide to jump up on it during the night. I think the Gorilla Glue is dry enough now that a cat paw print isn't going to show up and said paw won't be covered in glue!

While I'm doing laundry tomorrow I intend to get all those rocks done! I need to find a new place to put them to dry between coats of paint. I had them on the new shelf in the kitchen where I do most of my painting but the dog knocked a layer of rocks all over the kitchen floor. I had them stacked on magazine pages, one atop the other so they could dry. I did that on Monday so they sat for three days on that shelf and Fred went by when I wasn't looking and smacked that stack of rocks with his tail and the top layer went flying. I can't think of any other reason why there were all those rocks under the kitchen table, some way from where they rested on the shelf.

Well, thanks for stopping by to see what's shakin' in my neck of the woods!
Remember....
be good to one another!
It matters!
Peace
831