And Now it's Friday 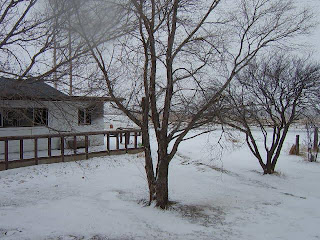 And Friday is almost done and over with.


Ignore yesterday's post. zo means nothing to anyone, not even me! I was going to write out a post yesterday but things came up when I first started the post and all that got out was 'zo'. I didn't have my fingers on the keyboard in the right position and I hit the wrong button somewhere and the post got posted. Then Susan honked her horn in the driveway and I was out of here to go have coffee with her in town. I forgot all about doing a post on the blog once I got back home. Yes. I was somewhat spacey yesterday! It happens.


RJ and Terah were here about an hour ago on their way home from Ness City. The had called earlier to see if I needed anything from Wally World while they were there. They brought Fred a bag of food and me a bottle of coffee creamer. They're both good kids!


They were telling me about their trip to Ness City. They took I-70 to Wakeeney from Hays and from there to Ness City. Somewhere in that stretch of snow covered interstate a FedEx truck pulling two trailers had somehow crashed. They said the cab of the truck and its engine were already on a flatbed trailer and the two trailers were in the median of the highway. Both trailers pretty mangled. I've no idea about the driver's condition. I am in hopes the person is fine after this ordeal. Two trailers can carry a lot of packages! Looks like there will be some late deliveries from that batch.


I don't have much excitement to talk about today. Those bitterly cold temperatures I told you all about the other day didn't come to be. Ma isn't always right any more than the weather gurus are sometimes. It did pour down freezing rain last night and then it snowed on top of that. It is indeed very cold outside though. Fred goes out and does his business and wants right back in the house, no lollagagging around for him! Billy went out this morning for about an hour and he'd had enough. Both of those critters like to go outside during the day for longer stretches of time than they went this morning. I took Fred to town with me in early afternoon. The roads were icy, but the sky was clear. It was actually a very nice looking day out there so long as you weren't out there in it! The picture I've shown you today is what it looks like out there. That picture was actually taken two winters ago but that's about how much snow is on the ground right now. The scenery is a bit different as there's now a rock garden between those two trees but you get the picture anyway. That's my front yard. The house you see is my burned house. RJ said he heard there was to be more freezing rain tonight. Guess we shall see.
It is more like morning to me than being 10 o'clock at night as I haven't been awake for very long. I'm trying desperately to turn my sleep pattern around so I can awake for Christmas Day. I don't know how well that is going to work though. I've been staying up later and later each day so I can get that turned around. I went to sleep around 2 this afternoon and was awake by 8:30 when the kids got here. I'm kinda bummed out these days. Spend way too much time alone it seems. Only I can change that though so I'll not whine at you good people!
I have presents to wrap this evening so I'm going to call this post done and get on with that!
Here's hoping that wherever you are, you are warm, safe, in the company of those you love and that you're happy today! I truly won't complain about my own situation!
Give and get your hugs .... we all need some every now and then!
Almost forgot..... it is official!!!! I have a grandbaby on the way! Due on the 4th of July. I'll keep you all updated!
Peace
831
Posted by Donna at 9:52 PM

That is nice :) an Independence Day baby :) and probably twin girls too :) and if I had not mistaken, your 1st biological grandkids :)

Hi there how are you? I just wanted to stop by and say hello and so hello...LOL I also have something for you at my blog, so when you are ready click here and pick up your award. I am very grateful for your friendship on my blog and yours.