Not much going on in my world. A bit of rain, two trips in one day, a little art....the muse seemed to have bunnies on the brain so I gave her her head and let her run! 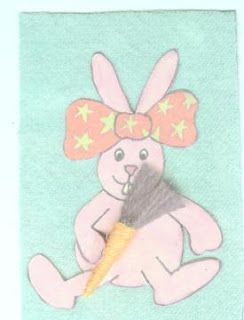 This is pink bunny. Pink Bunny is pretty happy except for the fact she has a horrid orange bow tied to her ears! 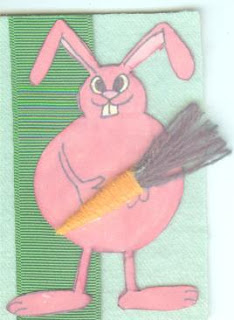 This is Mad Rabbit. I didn't mean to make this rabbit look angry, but that is the expression on his face! He's traded. I've yet to decide what I traded him for though. I'll get that done soon. 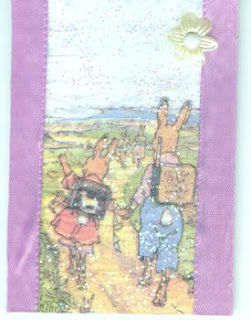 This is First Day of School. I wish I could tell you I drew that picture. I didn't. It is a paper napkin covered in glue and lightly sprinkled with pink irredescent glitter. Then I covered up the edges with purple silk ribbon. Oh and let's not forget the plastic pink flower with a little brad holding it to the card. It's cute. But it took very little effort to put it together. Effort should show!
The boat inchies you saw in the last post are in an envelope awaiting their trip to Cyprus. Mailing art is somewhat like when a friend leaves. You're never sure if they will make the journey unscathed yet you wish them the very best without you. The USPS cannot to be trusted to make sure each and every piece of mail that enters its system is delivered to where it was addressed. It's like gambling! I don't like to lose in MailArt Slots.
There are 5 of my cards floating around in the abyss of the back room of a post office somewhere between Kansas and Wisconsin. They've been lost for probably six months now. Pretty close to that if not. I keep hoping some day someone will get that envelope moving again. Won't that be a surprise to find! "The Ogre" is one of those cards. I don't remember the other four right off the top of my head.
"The Ogre" has a photograph of a chain link fence. That is all that came out in the picture. I will have to find "The Ogre"'s file and show him to you all. He was really cool. Behind that fence in this photograph is a lot for wrecked cars. My son's little pickup truck that he wrapped around a lightpole after running a red light was in that lot. There was a PT Cruiser involved in getting the boy wrapped around the lightpole. RJ fell asleep at the wheel in the middle of rush hour traffic on the busiest street in town. He was on his way home from having worked all night himself. He now owns that PT Cruiser ... on paper anyway....and the goose-egg-sized lump on the top of his head went away without doing too much damage to the boy.
I like instant noodles. You know the kind you toss in the microwave or steep in boiling water? Don't bother buying the cheddar cheese flavored ones. Instant Lunch is they are called. They aren't very good. Some thing ticks me off about these instant lunches. I forget which brand it is but there are noodles that come in paperboard boxes and I can throw one of them in the microwave without worrying about it. These Instant Lunch things come in a styrofoam cup and you cannot cook it in the microwave. That styrofoam cup is absolutely unneccesary! Why can it not be a paperboard bowl? I do not like Stryofoam. Had I known this when I bought them, I would have left them on the shelf.
I had to go shopping earlier this evening. HAD to. I hate shopping. Fred went along for the ride. He was ready to get out of the van when we got back from our 80 mile round trip trip. His leg bothers him when he can't stretch out for long periods of time. He waited patiently in the van while I went inside Walmart to get him and his kitties some chow and those grandkids some Easter stuff. I kept the peanut butter eggs for myself when I seen how much is in all those baskets sittin in my laundry room right now. Tomorrow will be a big day!
There is an a-thon going on over at AFA (the link's up there on the sidebar to the left). Those rabbits I showed you earlier are for the IMPSCAT. I thought the SCAT sounded quite alright enough, but some people are little shy, that's not the word..................disgusted by the meaning of the word scat. SCAT stands for Stamping and Collage a Thon. It has nothing to do with what a lumberjack finds after the bear has been in his camp. So to keep everyone (but me apparently) happy, the name was changed to IMPSCAT....meaning Improvised Stamping and Collage A Thon. It really doesn't matter to me. I just like to vent as much as the next guy some days.
Have a Happy Easter! I'll come yak at you all another day.
Here's some hugs....
Peace
831
Posted by Donna at 10:45 PM