A Trip To See The Doc, Some ATCS, A Chunky Page and Some Kids

Hi Readers!
The trip to the doc is the reason for not posting for 8 days. No, it didn't take 8 days to get to the doc but I'm still recovering from the road trip that I had to take to get to the doc's office. That, and I've had other things on my mind. Life throws you for a loop sometimes!
Come sometime in May I'll be having surgery on my thyroid. I have some additional scans and an ultrasound to go through before they determine exactly what they will yank out of me, who will do the yanking and when the yanking will be done.  They're gonna take a piece or two of the parathyroid out of me and then maybe my calcium levels will level off instead of being through the roof. You do what you gotta do and this surgery is something I gotta do. Simple as that!
My appt to see the doc was on Wednesday. I spent 14 hours with my youngest son that day as he went along for the doctor's appt. I had quite the adventure with Rich along! Never a dull moment with that boy!
I also got to see my granddaughter, step grandson, RJ (Rich's brother) and Terah in Ellsworth on our way home from Topeka where the doctor's visit was.
Thanks to Susan for letting me borrow her little red car to make that trip. Her boyfriend was using her other car that same day. He took the convertible to Nebraska to visit his brother on Friday. While he was gone, he hit a deer with the convertible so I was very very very glad to get the little red car home in one piece! And Susan was even gladder than I was!
For the last couple of days I've just been taking it easy. Long car rides do me in! I hurt from one end to the other in a greater degree than I normally do!
The artwork following was made between the last time I posted and today (11 April). So I have been  sitting around being creative. That doesn't take much out of me physically. 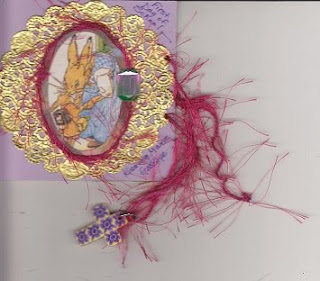 This Chunky Page is the first chunky made this year. It and the little purple rabbit to follow are remnants from the Easter-A-thon over at AFA over Easter Weekend.
First Day of School
Chunky Page
3 March 2010
The base is a game board cut to 4x4 inches. Cardstock, gold foil doily, paper napkin, eyelash yarn, a plastic pink gemstone and sharpie. The danglies are that same eyelash yarn and a fimo clay cross pendant I picked up somewhere. 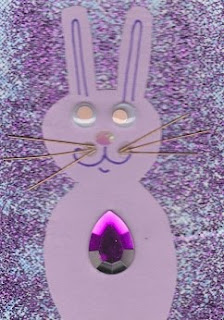 Purple Bunny
ATC
2 April 2010
365 Project Day #99
Collage--cardstock, glitter, more cardstock, wire for his whiskers, googly eyes, plastic sequin cut to size for his nose and plastic purple gemstone on his tummy. It's all attached to recycled chipboard from food packaging. Neither the chunky or this ATC traded.
I came across a package of googly eyes with different colored irises at Pamida a few weeks ago. This guy has pink eyes but there were also light blue, yellow and black in the package. Kind of different for googly eyes. I'd only seen black previously so I had to buy a package of the colored ones! 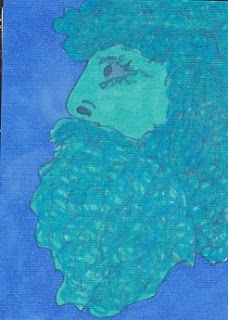 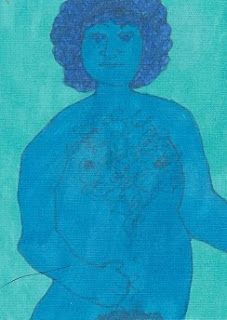 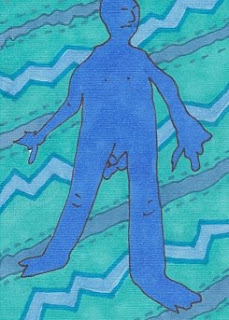 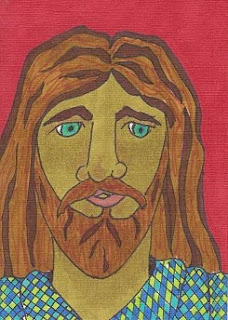 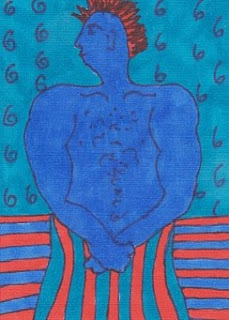 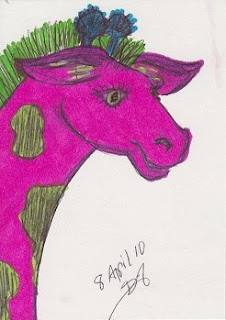 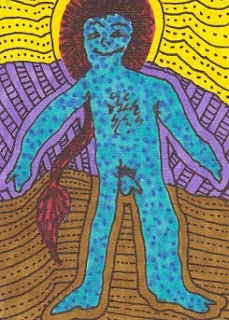 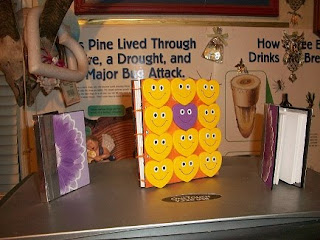 I've been making little books like a mad woman! I'm wanting to get a few of these ahead in hopes they will sell in the giftshop at the Art Center in Lucas. I will be taking a few things there sometime this coming week if I can gather the funds to do so.
The two little books on the outside are both ATC size, 2.5 x 3.5 inches. The one with the pages showing has three signatures of 5 pages each, giving it ... I never can figure that out....a bunch of pages! It has copy paper for pages. The other book has one signature with 5 pages and the paper is from a child's handwriting exercise tablet. Both are made with the same materials: Game boards cut to size make up the cover and the spine, foil tape on the outside spine, a greeting card, cardstock, silver foil paper on the insides of the covers. The one on the right has purple translucent plastic bag over cardstock on the front cover. These were my first try at this type of binding. The pages are sewn onto the endcover sheets. I like the way they turned out, though I wish I would have given both books the same number of pages. I learn as I go along though. The next book this size will have 3 signatures at least.
The other book with the smiley face hearts is made from a game board cut to 4 x 4 1/2 inches. The front cover is collaged with orange magazine pictures, some gesso and a bit of yellow paint. I also collaged one side of the back cover in the same manner. My mother gave me about 2 dozen of those little heart smiley faces. There are three colors: yellow, purple and pink. This book got yellow cause they were the most plentiful. They are made out of wood and then enameled. I just glued them to the front cover with E6000. The inside of the front cover is black, the color of the backside of the gameboard I used for the covers. The back cover is orange on the inside and black on the back. I meant to have it black on the inside and orange on the back but it didn't work out quite that way... so you just go with what you get! The book is sewn in a coptic stitch with bright orange crewel embroidery yarn. It has 5 signatures of 5 pages each. You'll have to figure out how many pages. Trying to do that just taxes my brain and I've taxed my brain plenty already today!
I joined an Art Doll Swap over at AFA. These four Bottle Cap Kids (BCK) are my entries into that swap. To come up with the names of these kids I used a couple of random name generators. I typed my friend's name into the generator and voila! an instant name for a Kid! I used the same name on all four kids. Not sure my friend would appreciate me saying he is female a couple times, but what he don't know won't hurt him! I'd like to think he'd be flattered I used his name for my kids at all, but I'm not sure he would be so we just won't tell him! :)
These kids have a few components I've not used before in making the Kids. My brother tore apart an old computer, a VCR and a printer and it is those things the capacitors and resistors came from. It's all just a bunch of junk anyway you look at it! 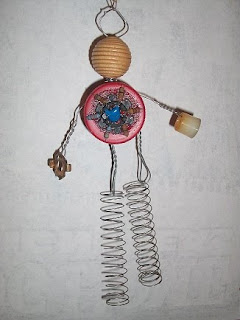 Adam Bishop
BCK
April 2010
Adam is made from a Coca Cola red plastic bottle cap, a wooden bead, silver colored wire from something or another, springs from an old VCR, one hand is a white plastic doodad and the other hand a brass doodad. The goodies on his tummy are all from a motherboard from an old computer, microbeads and a black wheel looking thing from something or another. He's right at six inches and is designed to hang. 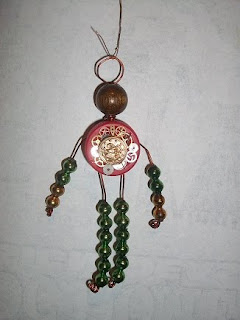 Francis Hudson
BCK
April 2010
Francis is made from a red plastic Coca Cola bottle cap, a wooden bead, salvaged copper wire, glass baubles from an antique string of Christmas garland. On her tummy are a bunch of watch parts, gears and such and a flattened metal button. She is a little over 5 inches and is designed to hang. 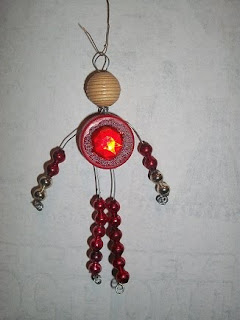 Wanda Davis
BCK
April 2010
Wanda is a sassy girl dressed in red, ready to paint the town any color you please! She's made from a red plastic Coca Cola bottle cap, a wooden bead, silver colored wire, glass baubles from a string of antique Christmas garland. On her tummy is a red plastic gemstone and some silver microbeads. She is about 5 inches and is designed to hang. 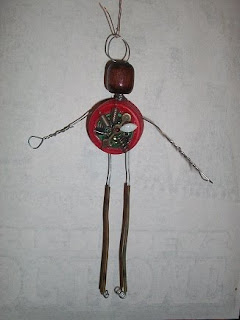 Tipper Davis
BCK
April 2010
Tipper is made from a red plastic Coca Cola bottle cap, a wooden bead, silver colored wire and two tall skinny springs from an old printer. On her tummy is a small motherboard from a digital watch, a metal hand from a small clock, various springs and a very small chip from a computer motherboard. She also has a genuine opal on her tummy. She is about 6 inches and is designed to hang.
I forgot to take a picture of the newest art endeavor that I started the day before yesterday and finished up this afternoon. There's also another handmade book in the works so I've seed for the next post at least!
I have an experiment out on the patio that I really should have gone and checked on today. I'm drying some pokeberry ink that I made back in Sept of 08. It's been sitting on the patio poured onto a sheet of glass since the day before yesterday. It was dry to the touch yesterday but it didn't quite feel right so I decided to leave it another day and hope to heck it didn't rain. No rain so far, so I'm good with that! Whether the experiment worked or not, I've no clue! It's dark outside now and it would be useless to go see what it's up to when I can't see in the dark!
I added another book read in 2010 to the list. The Power and The Glory by Graham Greene. This is reputedly his greatest work. It was a good book but I totally didn't get the ending.
Go get your hugs! They are important!
Peace
831
Posted by Donna at 11:17 PM

donna, i didn't want to ask you when you mentioned your health a while ago, thanks for telling us. and i wish you all the best. these thyroid operations are hugely successful, so try not to worry too much. man oh man i absolutely LOVE your blue men. you must dream about these guys, and you know of course which one is my favourite? guess. what lovely books, keep arting it will save you in the long run, it has me! hugs from me and gabriel logan.xx