A Variety of ART and Some Rambling From Your's Truly

I have been a bit busy with things other than art this past week. What that stuff may be, I can't quite remember but I have been busy, busy, busy. Went on a couple of roadtrips with my brother, one of them in pouring rain. That was FUN! I'd show you the 8 minute video I took while riding down the highway with rain falling in bucketfuls but I really don't know how to post it, nor do I think that you all want to see an 8 minute video of a rainstorm in the DARK! So you'll just have to imagine it for yourselves. It rained 2 inches in an hour's time in that storm so the rain was rather exciting. The lightning was spectacular and I was so glad it wasn't me doing the driving!
I don't much remember the other roadtrip I went on with my brother. I was so tired I could barely keep my eyes open! I know it wasn't raining for that one though. The roadtrips brother and I take never take us too awful far from home! The one we took in the rain took us about 60 miles round trip. It rained at home, but nowhere near like it did only 15 miles south of home!
I am enjoying my new porch! It looks so nice and is so nice to sit on in the afternoon when the sun isn't shining quite so brightly on the east side of the house where the porch is!
And it smells wonderful in my yard! The pear trees and redbud are blooming nicely! You can't see the forsthia bush but it too is blooming. Not the greatest picture of my new porch, but you all get the idea! Its the porch in the far distance, the one attached to the gray house. The bare spot is the lower driveway, we just drive across the grass to get there. That's five years worth of driving across that grass, yet the grass still grows pretty good there. The structure in the foreground of this picture is my burned house's west side porch and the corner of the roof.
My monkey sculpture is still sitting on the porch waiting for me to get back to it. That will happen eventually. Not this coming week though.
I'll not be home on Monday. I'm driving my sister home from her doc's appt in Wichita that day. On Tuesday I must finish the guest book for my son's wedding if it isn't done by then. I've started it but I've stalled on the creative aspect of the book. On Wednesday I'll be out in the burned house going through that mountain of clothes that no one wants. I've been slowly cutting up the things that have material I can use in making book covers, stealing the buttons and the labels out of said clothes. And there are a few things out there I've found that I brought in to wash and wear myself. On Thursday I'll be Hays doing the tests for my thyroid and on Friday I'll be headed to Nickerson so I can be there for the rehearsal dinner for the wedding on Saturday. Busy week ahead! I hope the old body cooperates!
The Fibro has been acting up all this past week. I hurt in places I didn't know could hurt! Different spots every day! No rhyme. No reason to it all. I'll survive though, I'm sure of that. I really wish my ankles would straighten up and quit that swelling up like toads though. The ankles don't hurt, they just look like hell!  The lower back, hips and arms hurt the most these days. I keep seeing little white lights, waiting for a migraine to come on but thankfully that hasn't happened! Not sure what's up with the little white lights showing up but no migraine following...a migraine ALWAYS follows on the heels of the little white lights!  I have noticed I can't see worth a damn lately. When I read in bed at night I have to wear my reading glasses to see the words in the book. I will be finished with that book soon. Maybe by Monday...all depends on how much downtime I get. If not by Monday, then I'll take it with me when I go with my sis to Wichita and read while I'm waiting for her to get done with what she has to do there. She won't be able to drive when she's done so I'm going to drive home. 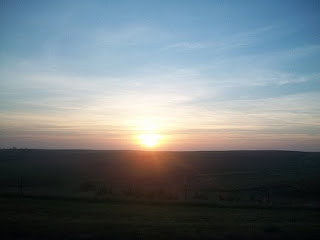 Sunrise 12 April 2010
Phillips County Kansas
I went to Phillipsburg with my sister Susan that morning to take her to the doctor. She had a cataract removed from her right eye that morning. She says it's a miracle! She now can see! 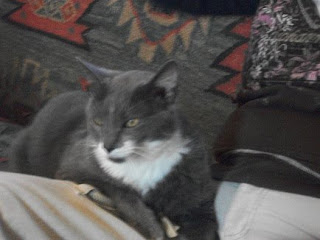 There's Billy sitting on Susan's lap on Friday evening. He's my greeting committee. He thinks he has to sit on everyone's lap when they come to visit. Most will let him take over their laps cause he just won't take no for an answer. He's like Miss Blue was, he doesn't like to sit on my lap, he prefers to sit on someone else's.
OK, I've rambled enough for the time being! On to Art! 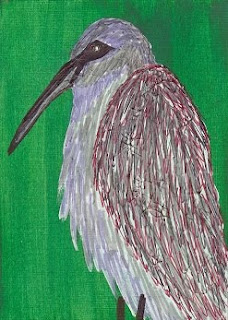 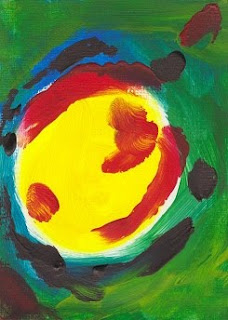 Into the Unknown
ATC
10 April 2010
365 Project Day #102
Watercolors on recycled cardstock. This is basically fingerpainting cause that's what I used to paint it! Abstracts are not my usual fare when painting. I kinda like this one though. 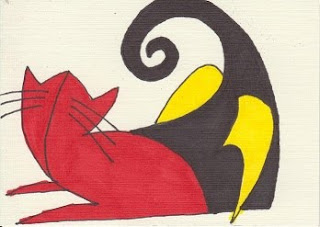 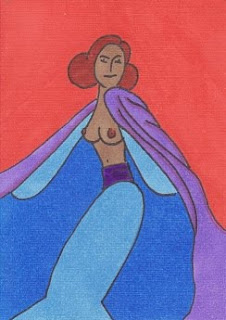 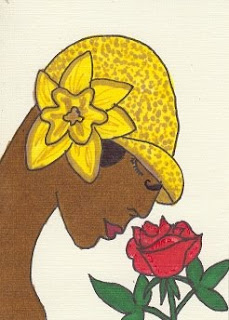 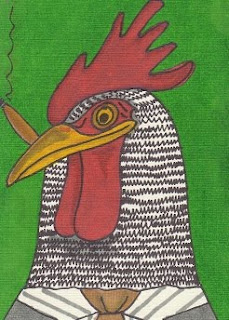 Smoked Chicken
ATC
14 April 2010
365 Project Day #107
Markers on recycled cardstock.
I put to good use one of the ugly mass produced pictures I bought at the thrift store in Norton for a quarter. 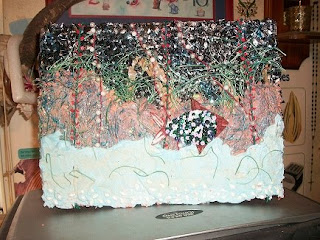 An Ocean of One
Mixed Media
Mixed Media Collage/Assemblage
April 2010
The base for this piece started out its life as a flocked fabric picture stretched over a sturdy cardboard base. It measures 12 x 9 x 1 1/2 inches. The elements on it include (from the bottom layer up) a layer of dictionary pages dry brushed with black paint, crocheted video tape (part of the movie The Full Monty), silver metallic paint, blue glitter paint, spackling compound tinted orangish with watercolor paints, blue glitter and more blue glitter paint. I'm uncertain what the green stuff across the middle is...its a bit like excelsior but not quite, red string from a dog food bag, fake pearls of two sizes, orange/red plastic coffee stirrer stick cut into little pieces, more spackling compound tinted with the blue glitter paint, real tiny white shells. The fish is constructed from recycled chipboard, brown foil candy wrapper, googly eye, sequins and copper paint pen. There's a boatload of E6000 holding the little doodads and the fish on. This is my second larger than ATC size mixed media piece. 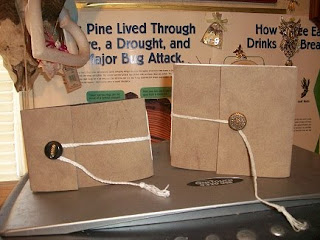 Two fake leather handmade books
April 2010
The one on the left is 3 x 5 inches, the one on the right is 4.5 x 5 inches. One of them has thin drawing paper in it and the other has sturdier drawing paper.  I bought a leather portfolio at the thrift store for 75 cents, the same time I bought the substrate for the fish picture above. Out of that portfolio I will get four little books and perhaps scrap enough for even more. I have an idea for some of the very small scraps. Handmade books are involved in those plans. You'll see them if it comes to fruition.
I already have more art to show but none of it has been scanned. There are 8 bottle cap kids completed, drying as we speak and another little book. Hopefull there will be two handmade books ready the next time I post. I hope to post sometime mid week.
You all get your hugs!
Peace
831
Posted by Donna at 3:38 AM