Happy Friday!
You will have to overlook any typos today. My fingers are hurting like big dogs this morning. The right hand especially for some reason.
Only six days till I have surgery on my thyroid. Will be glad to have that done and over with. I'm still not sleeping like one should. Was up for 22 hours straight and slept for 6 until the dog woke me wanting outside. I'm wide awake and there is no going back to sleep this morning! I shall survive though, I'm sure!
I'm heading on a roadtrip later this morning with my brother so there will be trip pictures tomorrow to post if I don't foget the camera when we walk out the door later! 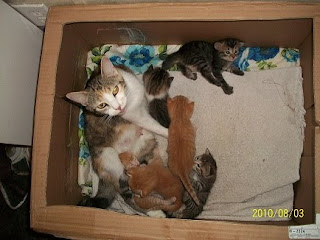 KITTEN UPDATE!
Kittens are 22 days old. This picture was taken three days ago. Growing like kittens are supposed to grow. No complaints from anyone but Lola who yells about everything and everything. I honestly don't know what that cat's problem is 99% of the time. 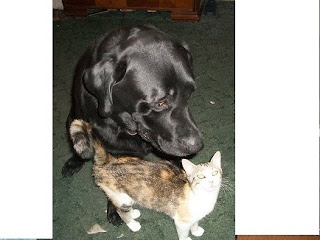 There's Fred and his Buddy Lola....I haven't figured out how to crop pictures with Paint. I tried but it was a FAIL.....keep trying, I guess.
I finally got caught up with the 365 Project. For how long remains to be seen. If I don't get an ATC done by tomorrow, I will be behind again.
This is the Russian Kitty Series. Not numbered but identified by color.
They were all done on the 4th of August 2010 and are pretty much all the same composition with variances in color and that's about it!
Kitties are freehand cut from Russian Text. Wire whiskers, metal foil tape for their noses, googly eyes. Backgrounds are random monochromatic colors cut from magazine pages and adhered to recycled chipboard. That thing on the kitties' chests is a plastic sequin. All of those are actually the same color but look like the color they are on top of more than the irridescent color they are. 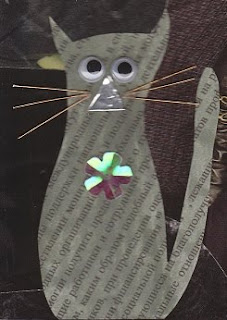 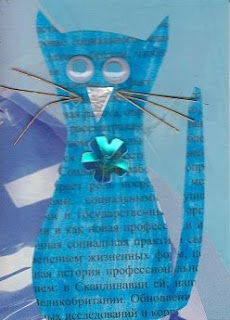 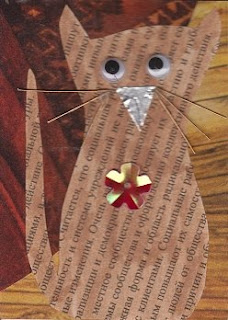 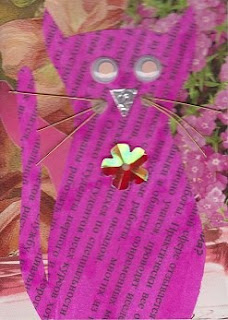 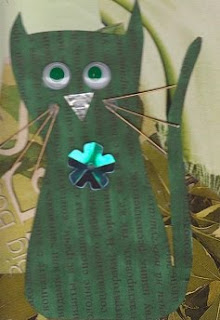 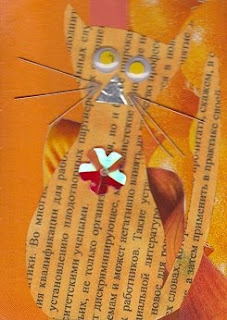 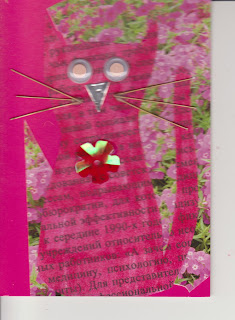 Pink
(Must of forgot to resize this one.) 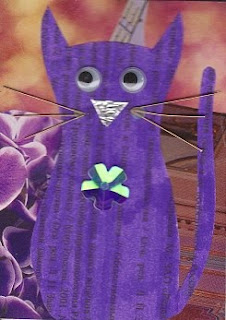 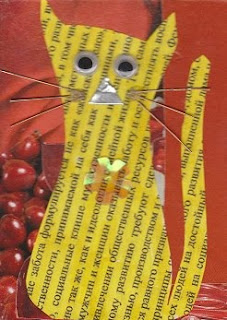 Red
(Yes, I know the kitty is yellow but these are named more for the background colors than the kitty itself.) 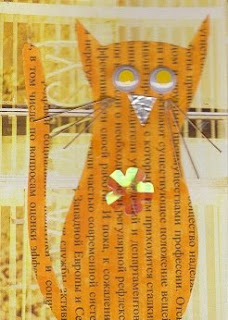 Yellow
My friend, Cordless, gave me three sets of guitar strings last week and requested I make him something out of one of them. I tried my hand at making bracelets from guitar strings. These are the results of my first attempt. They are pretty 'rough' but I think with each one made they will become prettier! Someone suggested I should use beads on them but I was trying to go with a 'manly bracelet' for my friend cause he is a man and I don't think beads are really him at all. Those gold things are the ballends from the strings. I also used a bit of copperwire on them. He hasn't actually seen them yet. 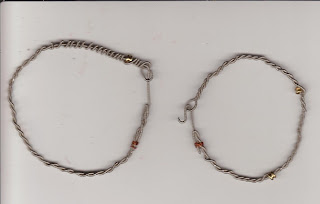 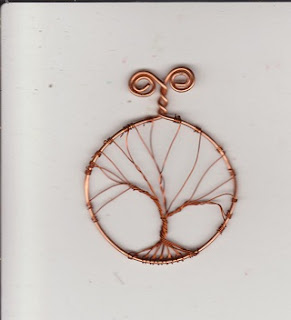 Tree of Life Pendant
5 August 2010
Copperwire
I bought some glass seed beads to make more of these in different colors. So expect to see some more in the future!
I have little books ready to be sewn together but that has yet to occur. I think I'll be taking the little books with me on the roadtrip later this morning. I can sew books while I'm sitting in the passenger's seat riding down the highway! Kill two birds with one stone, so to speak!
Thanks for stopping by today!
Get your hugs! Fridays are the best days for hugs! (Just my own opinion! :) )
Peace
831
Posted by Donna at 3:40 AM

Nice blog dear I like the way as you present your view among the all visitors. I would like to join you again on this blog it’s a very nice visit on this blog. It’s very attractive and effective for visitors. copper wire suppliers,copper wire manufacturers