No art to show you all tonight. I'm not sure what I'm concentrating on right now can actually be called art. Altering, yes! Art? Not so certain. Doesn't matter cause I don't have any pictures of art (so called or otherwise) to show you all this morning.
I do have a few pieces of 'real' art to show you all. I have morning coffee, a pig, a lizard in a bad dream and a rat drawn, colored and titled, all ready to be scanned. But scanning has not occured as of yet. Still have those little books to photograph....and then there's that stuff I'm not sure is even art that I've been working on....lots done, nothing to show.  Oh, and there's fabric paper out in the burnt house that's been drying for two days now. I'm pretty sure it's dry by now! The bank clock was reading 102 F at 8pm this evening! And it was just as warm yesterday as it was today.

I took the dog to the lake this afternoon. Sammy and Stephen went along. Fred and Stephen are a perfect match! The boy is my 13 yr old autistic nephew. Stephen is......Stephen. He's a free and happy child who lives in his own little world! Used to be he didn't talk much at all. He's coming out of that shell he lives in much more frequently, the more time I spend with him. He and the dog frolicked on the dock and the dog chased sticks thrown into the water.
I had the camera with me but didn't bother to dig it out of my bag while at the lake. Sometimes I could kick myself for the things I don't bother with...Dog and Boy had an excellent time at the lake. As did I and Boy's Papa! As my brother said, "An outing would be good." He was correct!

Later in the evening I rode to county line to meet up with RW, my youngest son. Jerry drove. Susan rode shotgun and I had the back seat all to myself. I took many pictures....almost 250 of them ....on that drive. Was great to see the youngest and to get a hug or two. 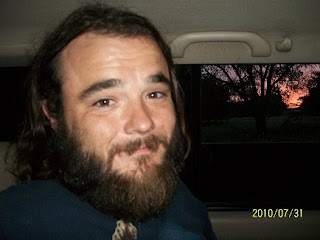 My Wild Child, RW
He was in a fantastic mood this evening! Smiles and laughter....I looked at him this evening after I took this picture of him sitting beside me in the back seat of Susan's Montero (Monty) and it occured to me, the boy has aged! Course if he shaves that bushy beard off, he'll look like he's 12 instead of 26. I sometimes wonder where all the years passed have gone to. I can't possibly have a 26 year old son. (His brother is 27.)  I can't possibly be 49 years old. Yet, that is just how it is.....
It was GOOD to see the boy this evening!
The sunset was absolutely gorgeous! I took many many pictures of the sunset while it was visible to me. 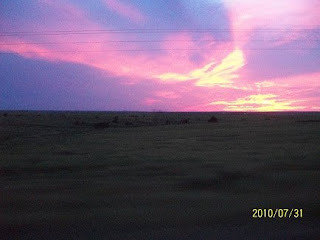 There's a face down toward the horizon to the right. If the picture were bigger, it would be easier to see. The cloud above reminded me of a witch riding a broom. A goblin and a witch in the setting sun. Halloween must be close.....it's not though, it's two months away still! The colors in this picture are brighter than the actual colors of the sunset. Starker. It's hard to take a clear picture going down the road 70 miles per hour and get a good picture. They just won't stop so I can get good clear photos! The sunset was very very nice this evening! 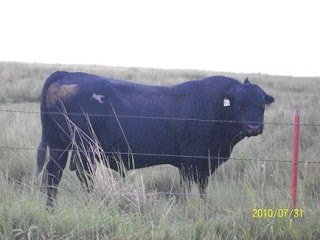 We met up with Mr. Bull before we met up with RW. He seemed quite unimpressed that we were admiring his cowlick. You see it! It's right there atop his head, that little point of hair....and the boy had a very dirty butt! He seemed quite unimpressed with us at all! Susan wouldn't let me tell him his forturne while were stopped, but as we were driving away she decided he doesn't have the same fortune as the cows across the road. He's an intact bull! Not some lowly steer! He's not getting on a big truck to meet his doom. He'll be pampered for some years with regular servicing, nice accomidations and good food to eat.  Susan NEVER lets me tell the herds of cows their fortune anymore. She says it just isn't right to tell them that. Maybe Evelyn is right. She's nuts! No. That can't be. Then I would be nuts as well. I'm the one who wants to tell cows their fortunes! lol lol Ah, hell! Maybe we're all NUTS!
I sometimes feel as though I've gone insane. Then I wake up on a new day and I'm back to normal. Whatever the hell normal is.....
I've taken care of my friends' dog, Harley all week. They went to New Mexico for Bob's Uncle Hank's funeral. I haven't gotten a picture of Harley either. Will have to do that tomorrow when I head into town to give Harley fresh water and some food. He's a funny dog! He hates cats or he'd of spent the week at my house. Last thing I need right now is a cat-hating dog in the house with half a dozen kittens being guarded by a mama cat. No. Best Harley stayed in town. He didn't get a whole lot of attention while his people have been gone, but he didn't go hungry or thirsty. And he did get to chase the neighborhood cats at home every single day! There was no stopping him! Harley is a mutt. He looks like he has a bit of husky in him but I'm not certain he does.Still a pup, only 9 or 10 months old. His pen is well shaded and he's not on a chain. I think it's cruel to put a dog on a chain and put him in the back yard. Dogs should be part of a family! Harley is that, he just has to stay outside when no one is home cause he can't be trusted alone in the house. Kinda like Fred! I didn't mind taking care of him. Got me out of the house every day this week but Monday. They should be home sometime tomorrow.
Sammy tells me he is going to build me a work table out in the burnt house in the room that was once my bedroom. The biggest room in the house unless you count the livingroom/diningroom as one room, which I don't. I've been using his stack of plywood for a work table. The work table was his idea after he saw my fabric paper out there, along with the box of papers and what have you, used for making fabric paper. A work table would be excellent! That stack of plywood is a tad bit too high anyway!
That sheet of fabric paper out there in the burnt house will be brought into the house tomorrow. I'd of got it earlier but the sun went down before I got home and it's dark in there when it's dark outside. I'll take a picture of it before I go cutting it up into a book cover. I'll make another sheet when I go out to get this sheet. Takes about 20 minutes from start to finish, sans drying time, to make a sheet of fabric paper. Need to remember to bring an extra pot of glue! It does take a bit of glue!
I added two books to the list of books read in 2010. Overload took me weeks to get through. Not cause it wasn't a good book, but because I don't read as much in the summer as I do in the winter. I finished it around 10pm this evening. Then I read (yes, the entire book!) The Observatory and finished it right after midnight. It was only 181 pages long! Easily read in two hours time!
I found a whole stack of new reading material at the thrift store in Nebraska a few months back. Not that I needed anymore reading material! I have thousands of books already! Well, maynot THOUSANDS, but probably better than 1000. I bought two books at the thrift store in town on Friday too.
I think Fred wants to go outside. He's sitting at the front door woofing, that's a good indication he wants out. Billy is already outside at his own insistence. I shall close this post out and say goodnight/goodmorning/good day! Not sure when the next post will happen, but there will be artwork in it!
Go get your hugs! You can never have too many! They're like smiles: cost nothing and are an unending commodity!
Peace my friends!
831
Posted by Donna at 3:44 AM