Hello Readers!
(Hi Joss! :) )
Ok it may be a far stretch to say elves were here. If they were here, they weren't very helpful. I thought elves were helpful little beings. I could use some help with the vacuuming. But I do have elf slippers to show you all and the birds materialized as well! And of course I can't just stick to one or two different projects. Oh, no! No! I must go with a variety of things to keep me occupied!
Enjoy! 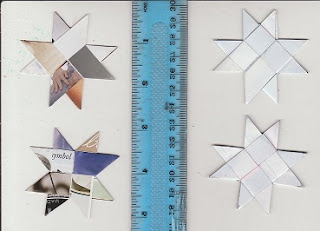 I wanted to make some 3D stars but that isn't exactly what I ended up with this experiment. I found a tutorial for these folded paper stars on the internet. The instructions didn't specify how long my 1/2 inch strips of paper should be and I thought for sure the magazine pages I cut into 1/2 inch strips would be plenty long enough. Nope. Change of tutorial! Well, I didn't really change it, I just stopped halfway through it cause my strips were not long enough! So instead of 3D paper stars I ended up with flat stars that are perfect to be made into a garland of some sort!
I made 37 of them one afternoon and I took them out to the art room in the burnt house and spray painted them with gloss enamel. They aren't exactly white, but close enough!
They look pretty cool left as they come out with the graphics of the magazine pages too. They're 2 inches across from point to point.
Mindless work accomplished watching reruns of Simon and Simon on hulu.
I've a soft spot for detective shows, especially when good looking men are the main characters!
EVIDENCE 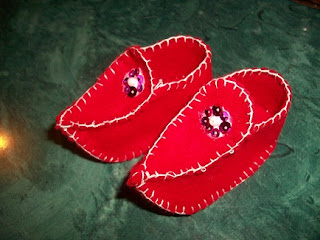 These elves must be really short guys cause these little slippers are only about 3 inches from heel to toe! And so fun to make. I do wish elves had left them! They will end up with ribbons sewn to the heel end and used as Christmas Tree ornaments.
We have a red pair with a white bead and pink sequins and 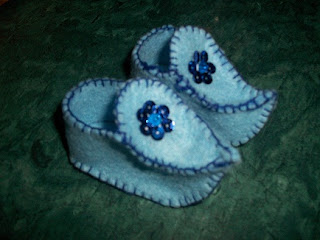 a light blue pair with a blue plastic bead and blue sequins.
You'll see more elf slippers as I've already made more, just haven't got a picture of them yet. 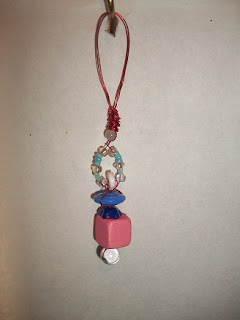 Pink Stone Bead Dangly
I was going through all this stuff on my desk the other day and came across a little baggie of beads. I dumped them in a bowl and made this out of most of them. It's about 3 inches long, all the beads are either glass or stone except for the white bead at the bottom which is plastic. 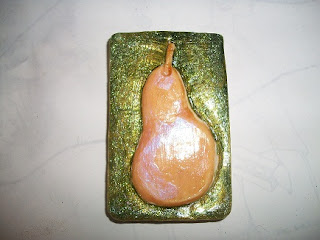 I really like this magnet!
I'm a stone carver before anything else. That is my first art love....stone carving. Soap is the next best thing to stone. I can't carve stone anymore. My old body refuses to cooperate with that endeavor so I went the route of doing relief carvings on hotel sized bars of soap instead. Soap is a whole lot lighter than stone! I can carry soap from one spot to the next, can't do that with stones of any size.
I carved the pear sometime last year. I painted it with fingernail polish in three different colors just the other day...since the last post. I attached 2 strong magnets to the back of it. It's about 2x3 inches and 3/8inch thick.
I also had the paper mache going again too.
I made 8 birds but you only get to see 7 of them today as the other one is still laying on the kitchen table waiting for me to attach its legs. I was certain I had made 8 sets of legs but when it was time to put legs on, only 7 sets could be found. I've since found the missing set of legs, just haven't got them glued in yet. I blamed the missing legs on that Lola cat but when I found them laying on the floor in the deskroom next to the desk, I am certain I dropped them when I took the other ones to the kitchen. Making bird legs is a mindless activity like folding stars. I've gone through all of Season 1 of Simon and Simon and almost 3/4 of the way through Season 2. The Simon boys have been very helpful in the artistic department.
Course, only the viewer can say whether this is actually art or not.... I just make it! 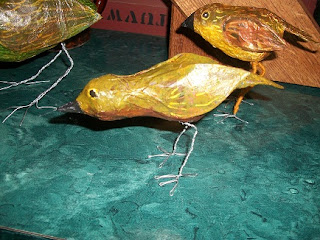 Weird Bird
All of these birds with the exception of the Big Green Bird (you'll see it in a minute) are between 3 - 5 inches from beak to tail. 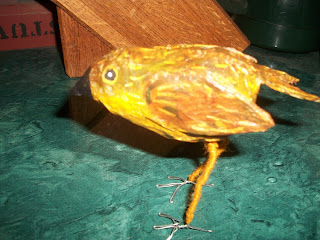 Little Foot Bird
They are made with newspaper, drug brochure paper, acrylic paint, wire and crewel embroidery thread. There's more than a bit of glue in each as well.
Those feet are a bitch to form in a length of wire! I've yet to figure out how to make them ALL THE SAME SIZE. I can't even make them in proportion to each individual bird like I want to be able to do. Some of the birds don't have crewel embroidery thread wrapped around their legs because I ran out of that color. All that's left is blue, I think, and blue isn't gonna work for these legs! 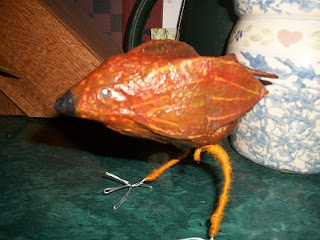 Rust Brown Bird
For some reason the first batch of birds stand up better than this batch does. I had a devil of a time getting them to stand on their own. Some of them aren't standing pretty at all....like this one!
I really like the colors of the first batch of birds, not so much the drab browns I ended up with in this painting session. The green bird was a planned occurance. I had no clue what color the others would end up when I dragged out all the paints.
I think I might of overwhelmed myself by taking the paint basket to the kitchen. Gave myself TOO MANY colors to choose from! We'll just have to see what happens with the third batch of birds! 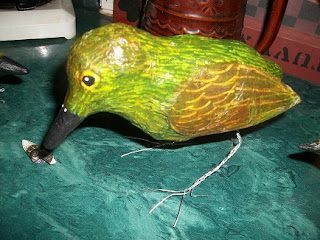 Big Green Bird
This one is about 7 inches from beak to tail.
This one ended up being so much larger than the other 7 because I couldn't get this thing to cooperate from the very beginning! To get a life-size bird you start with a quarter sheet of newspaper, wad it into a loose pear shaped ball and start taping it with masking tape into a bird shape. This one refused to transform into a bird shape without an extra quarter sheet of newspaper. It worked out in the end despite the trouble the darn thing gave me at the start. I almost trashed that initial ball of newspaper....glad I didn't! :)
I'm not crazy about his feet though. Big birds need a different foot structure....wire ain't gonna cut it. Least not that guage of wire. More experimentation to come with larger bird legs! 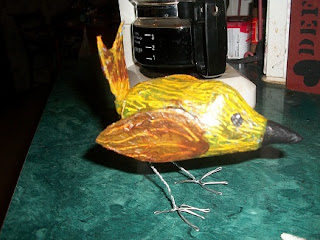 Big Beak Bird
Tails have me perplexed. The tutorial I followed (need to show you all that) have the tails attached across the top of the birds back. My tails didn't look right up there. But they don't look quite right sticking up in the air like that either. I like the little bird that got no tail. Somehow whatever you do works out OK.
It's all a big adventure when you don't know what you're doing with your medium. Paper mache is full of fun discoveries. There is no right or wrong way.
I bought this house because of those green counter tops! 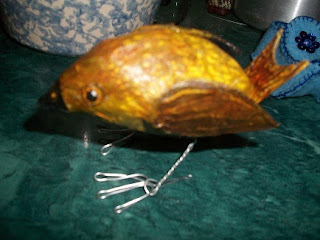 Big Foot Bird
There will be more birds in the future. 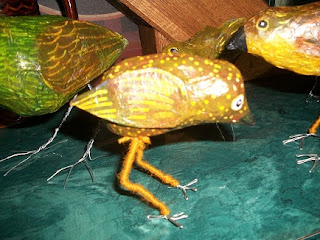 Tailless Bird
This one is my favorite from this batch. I made wings and tails all at once for all the birds. I knew the big one wasn't going to have a tail but I really thought I had cut 7 tails for the other birds. This guy ended up without a tail cause there wasn't one for him. This is also the smallest bird I've made yet. He's barely 3 inches from beak to tail end.
Yes, there will be more birds!
Couple of Chunky Pages were made.... 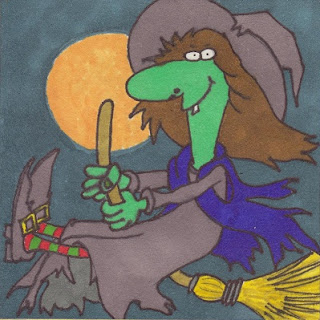 Witch's Joke Chunky Page
The witch is done in markers on drawing paper and then glued to a cereal box base. The backside is decorated with green and purple papers. The dangly is a little 2 inch square neon green and black tiger strip print cardstock pamphlet stitched notebook with copy paper pages on which I wrote a bunch of witch jokes I had found on the internet. 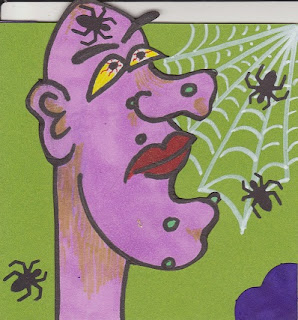 Monster Chunky
I went with drawing and collage on this one. The monster is done in markers on cardstock and then cut out and glued along with the black paper spiders (I know, they only have six legs! Not sure how that got by the design team that made that punch.) and the green cardstock where I drew the web in paint pen and that's a piece of purple paper in the lower right hand corner.
I forget what the backside looks like but it is decorated. Can't look to see, I sent it off to Oregon a couple days ago.
Like I said, there are things made that need to be photographed to show them to you all. There are elf slippers, a beaded bracelet, some ribbon stars, another paper mache bird and I'm sure by the time I get around to posting again, there will be other things also.
I'm still working on monsters and hot pot holders.
I started some more magnets this evening too.
I've started another project for Christmas that involves those elf slippers and the folded paper stars. I'm working on some ribbon wreaths that are ornament size. I cut the ribbons for those already but I made the ribbons about an inch too short so they're giving me a bit of trouble but I've got 5 of them done already, still about a dozen more to go. Ran out of ribbon or there would have been more!
Always busy!
I just can't NOT do something creative every single day.
I sometimes count cooking in my creativeness but if truth be known I'm not a very creative cook these days...it seems to be the same ol' same ol' day in and day out where cooking is concerned!
I sometimes count writing poetry in the creativeness as well. I don't usually share the poetry with others though so don't expect to see much, if any, on this blog.
I keep you all busy enough with the artwork, you don't really need poetry too. Do you?
:)
I even got a bit of laundry done and the linens on the bed changed in the last few days! (Thanks for the help Ma! 831) Means the old body is behaving for the most part. Still need 12 hours of sleep or more in a 24 hr period. Can't seem to stay awake during the day... Up all night...sleep all day.
My old body is still in rebel mode but that's nothing new. I had an attack on the right arm earlier today. That hurt like crazy! But it only lasted a couple seconds and that arm is, if sore, working like it should!
Sometimes when I reach for things in front of me that right arm will decide it doesn't want to be extended its full length and it will cease up. Won't move and it hurts like crazy! Only happens when I'm trying to reach for something though. I've never had one that hurt as much as it did this afternoon!
Time to make another doctor's appointment so will discuss those attacks on the right arm with her when that happens. She probably wants to sick the vampires on me anyway! Has been a few months since the last visit with them.....
All is well in my world more or less. More than less actually.
Until next time........
Here's hoping all is well in your worlds!
Thanks for reading and remember.....
Be good to one another! It matters!
Peace my friends!
831
Posted by Donna at 11:39 PM